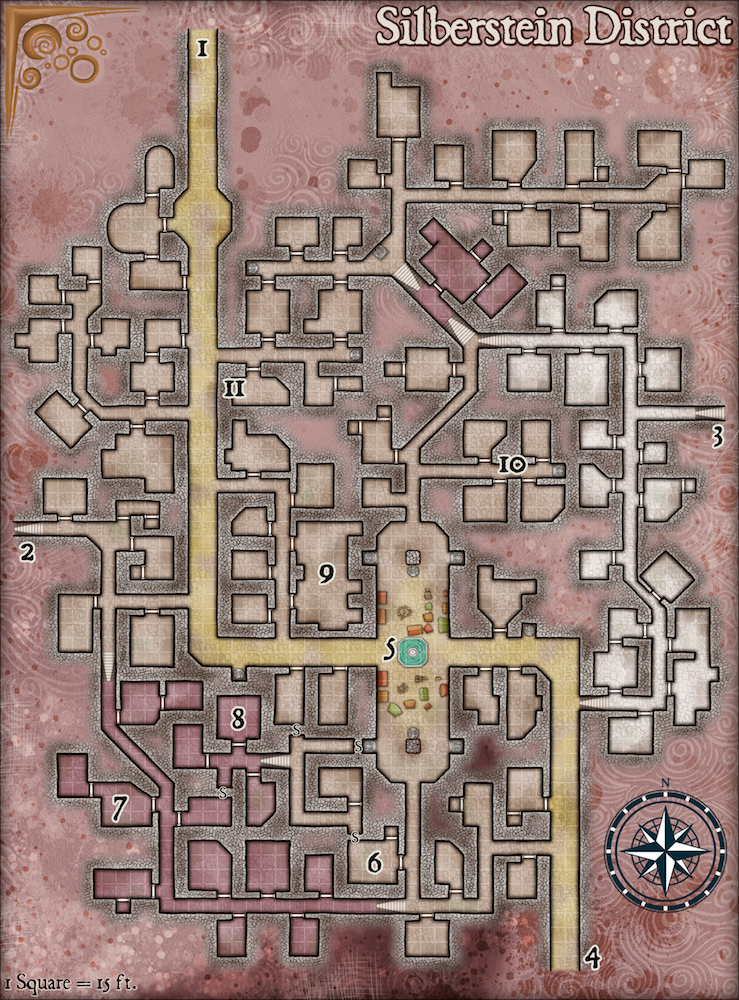 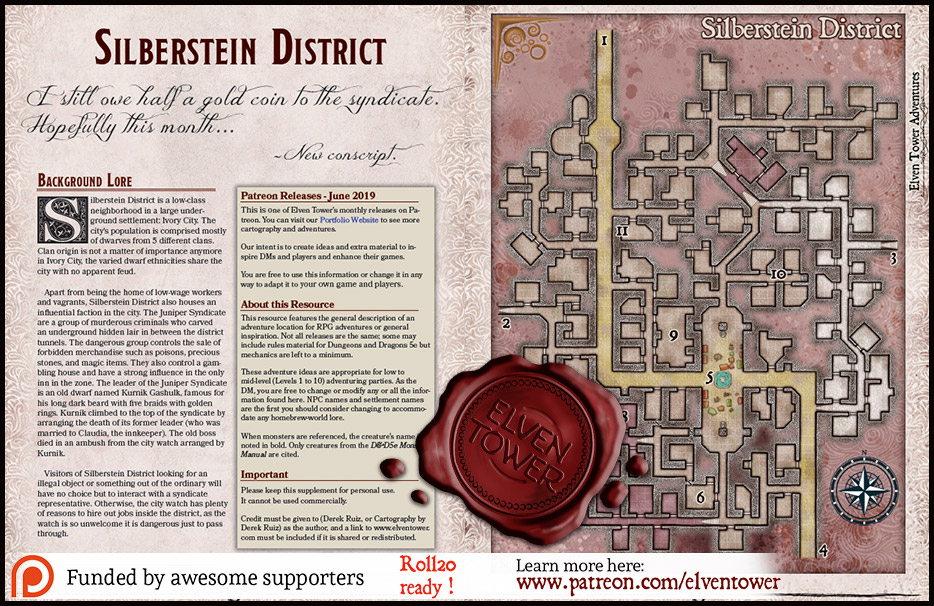 Silberstein District is a low-class neighborhood in a large underground settlement: Ivory City. The city’s population is comprised mostly of dwarves from 5 different clans. Clan origin is not a matter of importance anymore in Ivory City, the varied dwarf ethnicities share the city with no apparent feud.

Apart from being the home of low-wage workers and vagrants, Silberstein District also houses an influential faction in the city. The Juniper Syndicate are a group of murderous criminals who carved an underground hidden lair in between the district tunnels. The dangerous group controls the sale of forbidden merchandise such as poisons, precious stones, and magic items. They also control a gambling house and have a strong influence in the only inn in the zone. The leader of the Juniper Syndicate is an old dwarf named Kurnik Gashulk, famous for his long dark beard with five braids with golden rings. Kurnik climbed to the top of the syndicate by arranging the death of its former leader (who was married to Claudia, the innkeeper). The old boss died in an ambush from the city watch arranged by Kurnik.

Visitors of Silberstein District looking for an illegal object or something out of the ordinary will have no choice but to interact with a syndicate representative. Otherwise, the city watch has plenty of reasons to hire out jobs inside the district, as the watch is so unwelcome it is dangerous just to pass through.

Bull Street continues north to one of Ivory City’s most affluent districts. The change of ambiance and type of population is so dire that they installed a toll station in recent years. Exiting Silberstein District this way has a cost of 5 silver pieces. This is enough to deter most people from going to the nicer parts of Ivory City. Entering Silberstein has no cost but most rich people avoid visiting this section of the city anyway.

Crossing the toll either way requires the person to provide a document of identification. Of course, the toll keeper can be persuaded to omit this step with a successful DC 13 Charisma (Persuasion) check. Roll with advantage if the adventurers provide a tip of 5 silver pieces or more.

Dallway Suburbs are a step up from the poor neighborhoods in Silberstein District. There is no toll to cross in either direction. Some fortunate people in Silberstein work in Dallway or even farther away sections of the city.

A long stairway leads to a natural cave slanted slightly upwards. The fungi gardens/farms are in a large domed chamber two miles away from Silberstein District. The fungi gardens provide food and other products for a large portion of the city. If something were to happen to the farms that prevented their ability to provide food Ivory City would be in a dire situation with no clear solution. This is why a detachment of the watch is always present in the gardens, despite its distance to the city and its apparent non-importance.

The person in charge of the gardens is an old dwarf named Rigo Homeri. Rigo has been in charge of the place for more than sixty years and is an expert in the field. Rigo can identify and name any vegetal or fungal product with accuracy. He prepares herbal infusions with varied properties in his spare time.

Iron Shoe widens about half a mile south of Silberstein District. It features the largest conglomerate of businesses and merchants and it is the economic hub of the city. The point where it connects with Silberstein is nothing but a shadow of its grandeur. There are two shops near the entrance. The southernmost one is a blacksmith shop whose owner is drunk most of the time. The old dwarf, Hollard, cannot swing the hammer properly anymore. It is his assistant, Derel, who performs most of the actual work. The second shop belongs to a tailor.

The market is the heart of Silberstein District. Local merchants come and show their wares every day for a few hours. While the market has the appearance of a regular business place, shady deals and forbidden merchandise changes hands all the time. The place is under the control of the Juniper Syndicate.

The syndicate controls the sales of precious stones, foreign coins, spell scrolls, poisons, and a few magic items. Some of these objects are sold in the market proper to known clients. New clients or particularly valuable items are exchanged only inside the syndicate’s lair (Area 8).

Visitors looking for a cheap place to stay can find no better lodging in the area than the Hungry Troll Inn. It is known that the watch or other enforcers do not survey this location because of the proximity to the syndicate’s grounds. The owner of the inn is a tall woman named Claudia Gearl. Claudia is the widow of a former syndicate boss. The syndicate respects her establishment and do not mess with her out of respect to her late husband.

The accommodations in the Hungry Troll Inn are minimal and spartan. There are no private rooms, only a common room with 10 sleeping pads and a few beds, taken most of the time. The price is cheap, though. Only a silver piece per person, per night. It includes a meal and the use of a public bath behind the counter.

Adamius is a quirky gnome that likes the potential business opportunities of the area but despises the market and the syndicate’s control of the area. He opened shop a few streets away from the market. The syndicate collects a free from Adamius once a month to let him stay open. The gnome hates them for that but sees no way of getting out of the current situation. His store sells all kinds of things, supplies, and traveling gear.

Any kind of equipment or object with a value of 10 gp or less is usually in stock. Adamius does not deal in magic items because the syndicate has forbidden it. They must be the only ones in control of such merchandise.

The syndicate carved their lair in between two streets in Silberstein District. There are four entrances; all hidden by movable sections of wall that open only when the correct password is said out loud. The entrance behind a statue in the market is well known to the locals but it is still only used by syndicate members. The entrance to the Hungry Troll Inn exists since the time Claudia’s husband lead the organization, it is seldom used now. The other two lead to empty streets and their locations are known only by the syndicate members. The passwords change once per month and are usually in the dwarven tongue.

Different religious beliefs find representation in this polytheistic temple. There are seven separate altars to varied deities; the most worshipped in Ivory City. Given the multicultural approach of the temple, no priest or cleric of any religion is present. Dean Rajid is in charge of the temple but his only labors are to keep the place clean and organize a few charitable projects in the neighborhood.

They say gambling is the tax for the poor. Farid was the original owner of the gambling house but he passed away more than ten years ago. The name remained because it was so popular, despite several attempts to rebrand it something else. The acting owner is a man named Terish but he is just a pawn of the Juniper Syndicate. The syndicate controls all gambling in the area and keeps close tabs with the usual players.

The gamble games are often manipulated to make people lose and acquire large debts to the syndicate. These poor souls are then conscripted as new members for the guild. The motivation of many syndicate recent members is only to earn enough to pay back their debts. In practice, this has never happened.

The city watch keeps this safehouse inside the Silberstein District for intelligence purposes. A safe-keeper is always present, Vikar. He is friends with Adamius and wishes to see the syndicate removed from the district. If the adventurers are following orders from the watch, they may be given access to this safehouse to conduct their activities away from prying eyes.

These are the general features of the Silberstein District. It is located in a dwarven underground settlement in the Underdark.

Terrain. An irregular pattern of tiled stone bricks the floors of most of the district and main streets. The rough-hewn stone of the walls features decorations in the form of paintings and even hanging tapestries in some places.

Doors. Customary to the dwarven city, all doors are made of a material similar to wood that comes from a large fungus “tree”. The doors are almost 10-feet-wide and feature locks of varying complexity. An adventurer can bypass an average lock with a successful DC 14 Dexterity (Thieves Tools) check.

Light. Dwarves do not need public lighting but some places feature magic lanterns on sconces nonetheless. The main street, the market, and the temple feature permanent illumination.

Smells and Sounds. The district lacks proper air circulation and chimneys. Thus, smoke, gases, and other smells linger in the area for prolonged periods.