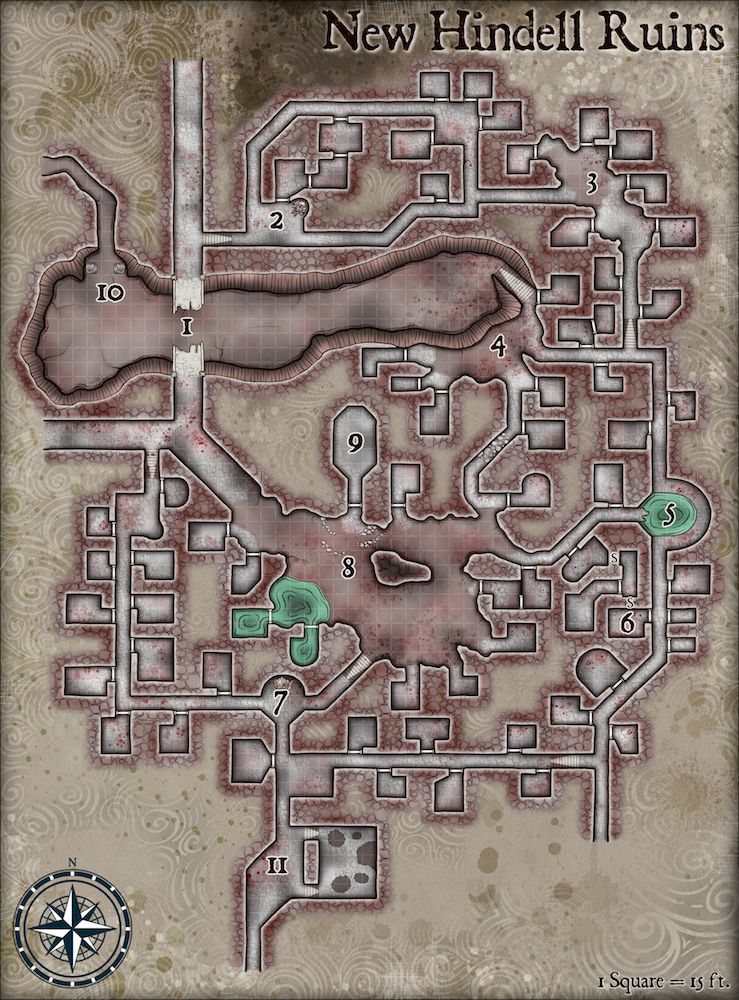 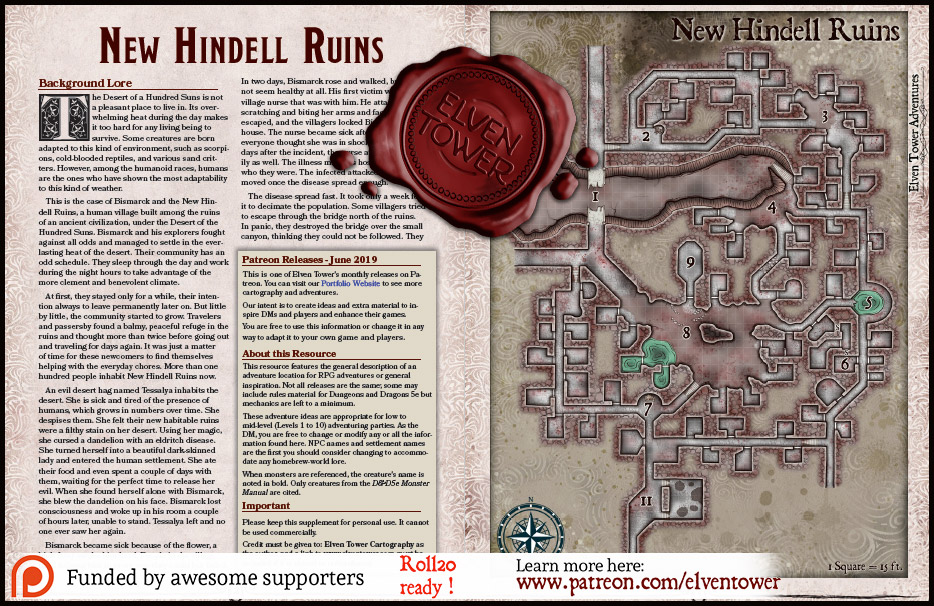 The Desert of a Hundred Suns is not a pleasant place to live in. Its overwhelming heat during the day makes it too hard for any living being to survive. Some creatures are born adapted to this kind of environment, such as scorpions, cold-blooded reptiles, and various sand critters. However, among the humanoid races, humans are the ones who have shown the most adaptability to this kind of weather.

This is the case of Bismarck and the New Hindell Ruins, a human village built among the ruins of an ancient civilization, under the Desert of the Hundred Suns. Bismarck and his explorers fought against all odds and managed to settle in the everlasting heat of the desert. Their community has an odd schedule. They sleep through the day and work during the night hours to take advantage of the more clement and benevolent climate.

At first, they stayed only for a while, their intention always to leave permanently later on. But little by little, the community started to grow. Travelers and passersby found a balmy, peaceful refuge in the ruins and thought more than twice before going out and traveling for days again. It was just a matter of time for these newcomers to find themselves helping with the everyday chores. More than one hundred people inhabit New Hindell Ruins now.

An evil desert hag named Tessalya inhabits the desert. She is sick and tired of the presence of humans, which grows in numbers over time. She despises them. She felt their new habitable ruins were a filthy stain on her desert. Using her magic, she cursed a dandelion with an eldritch disease. She turned herself into a beautiful dark-skinned lady and entered the human settlement. She ate their food and even spent a couple of days with them, waiting for the perfect time to release her evil. When she found herself alone with Bismarck, she blew the dandelion on his face. Bismarck lost consciousness and woke up in his room a couple of hours later, unable to stand. Tessalya left and no one ever saw her again.

Bismarck became sick because of the flower, a high fever stroke him hard. People in the village tried helping him in every way they could but failed. In two days, Bismarck rose and walked, but did not seem healthy at all. His first victim was the village nurse that was with him. He attacked her, scratching and biting her arms and face. The nurse escaped, and the villagers locked Bismarck in his house. The nurse became sick after the attack, everyone thought she was in shock. However, two days after the incident, the nurse attacked her family as well. The illness made its hosts lose track of who they were. The infected attacked anything that moved once the disease spread enough.

The disease spread fast. It took only a week for it to decimate the population. Some villagers tried to escape through the bridge north of the ruins. In panic, they destroyed the bridge over the small canyon, thinking they could not be followed. They fled north into the caves. A few dozen survivors are still hiding in the center of the village, inside a temple-like structure. They barricaded the entrance and brought all the food and water they could carry. But their resources are running out. It is a matter of time until they are forced to go out and escape or search for more supplies.

It has been a fortnight since Tessalya the hag left. The infected in the city have stopped eating and sleeping. It is as if the disease is the only thing keeping them alive. Some others have passed out or died, their bodies’ systems unable to function.

Some of the infected have gone out of New Hindell Ruins. They roam the desert and die of exposure. Their desiccated carcasses are the first hints that something terrible happened in New Hindell Ruins. Adventurers traveling the Desert of the Hundred Suns are bound to witness one of these infected humans lying on the sand, lifeless. Tracking the way to the village is not very hard due to the putrid stench which becomes overwhelming as one gets closer. Is it the end of New Hindell Ruins? The disease is too dangerous to be left unchecked. Something must be done.

The few people who escaped destroyed the 10-feet-wide bridge. It is hard but not impossible to jump across the gap. A successful DC 17 Strength (Athletics) check allows a character to reach the other side. Falling off the bridge to the gorge is a 60-feet drop. Any character who falls to the gorge must make a successful DC 14 Dexterity saving throw taking 12 (4d6) bludgeoning damage on a failed save, or half as much damage on a successful one. The tunnel north of the bridge leads to cave system with several exits to the desert. This section of the underground complex is not within the scope of this module and left to the DM’s discretion.

This is where newcomers were welcomed. There were some tables and chairs to rest and drink fresh water. The furniture is now wrecked and lying on the ground. A few merchants used to sell their stuff here. A successful DC 12 Intelligence (Investigation) check allows a character to find 100 gold pieces in silver goods scattered around, and rations of spoiled food for five days. This food can be cleansed by a purify food and drink spell.

A passive Perception score of 14 or higher or a successful DC 14 Wisdom (Perception) check allows a character to hear some infected in Area 3. If the adventurers are aware of the infected, a successful DC 14 Dexterity (Stealth) check lets them search the place unnoticed.

A decent concentration of families lived here. It is now crowded with infected. There are eight infected adults and three children. They attack any other living being that is not yet infected on sight.

North to this compound of houses are the stairs leading to the canyon. A score of infected awaits here. They are all dead or about to die. They do not attack. This is a chance for characters to try to analyze what is going on. A successful DC 16 Wisdom (Medicine) check allows a character to determine the way the disease spreads, which is by body fluid contact, such as saliva or blood.

This is the main source of freshwater in New Hindell Ruins. The water looks dark and stained. A purify food and drink spell can make the water healthy again. Otherwise, drinking foul water gives a level of exhaustion.

These storage rooms have already been sacked. The few survivors who managed to lock themselves in the temple (Area 9) went through here first. A successful DC 12 Intelligence (Investigation) check allows a character to find 200 gold pieces in handicrafts and fancy utensils.

A passive Perception score of 14 or higher or a successful DC 14 Wisdom (Perception) check allows a character to notice a secret door north of the storage room. There are two small children hidden inside this secret room. They are almost unconscious and dying of starvation. They have been hidden in there for days, too afraid of coming out. A successful DC 12 Intelligence (Investigation) check allows a character to find six vials of holy water, 100 gold pieces, and three scrolls of lesser restoration.

The place of the village was reserved for a small square. People gathered here to relax and chat.

The walls and ground are natural stone and dirt. There is water to the west, which is the result of infected that attacked people inside the water storage rooms. Barrels and containers of fresh water were kept in here. The clash destroyed most of them and caused the rooms to flood. The pool is 2-feet in both rooms. Both rooms are considered difficult terrain.

The water has spread to the cave outside. This water is tainted with the disease from the few bodies floating in it.

A great amount of infected is here. Some are already dead on the ground. The rest are crowded by the entrance of the temple (Area 9). There is a total of twelve adults and four children still trying to reach the cornered survivors.

The temple is large enough to serve as a refuge for almost fifty people. The village priest, Randall, is inside with two dozen men, women, and children. Half of them are starving. They have no means to fight nor defend themselves. Their will to live is the only thing that is keeping them alive. They barricaded the doors with benches and furniture. Their only light source is some oil lamps. The oil, like the food, is running out.

This is an unfinished tunnel. Villagers in New Hindell Ruins were digging another entrance to the settlement. The tunnel is 5-feet-wide and it ends a few hundred feet west to the ruins. There is nothing of value here.

This is a warehouse for coal sorting. Several boxes and barrels with coal are still intact. It seems the few infected that came here left the place immediately.

The disease has an incubation period of 48 hours. Any creature that receives damage from an infected must make a successful DC 11 Constitution saving throw to avoid contracting the virus. Any creature who succeeds in their first saving throw is unaffected by the virus for the next 24 hours.

Contracting the virus causes its host to acquire one level of exhaustion immediately. After the first day, an infected person is sick with a high fever and unable to stand. 24 hours later, the creature loses control of its body and conscience, attacking everything that moves with the only purpose of spreading the disease further.

A lesser restoration or remove curse spells eliminate the disease. A protection from good and evil spell has advantage on the saving throw to avoid getting sick.

Dealing with the infected.

All infected adults are considered zombies for fighting purposes, without the undead fortitude ability. Children infected have half their hit points and deal half damage on a successful attack.

Adventurers can try to reason with the infected. If they manage to tie one up, they can use the holy water to reduce the virus’s power over him. They can try telling the infected to fight the virus, to be stronger than it. A successful DC 15 Charisma (Persuasion) check causes the victim to recover part of his consciousness for a few seconds. This can help the adventurers know what happened before reaching the survivors at the temple.

Adventurers do not have to kill the infected. They could deal non-lethal final blows to try to heal them afterward. Infected are still curable. However, some of them have stopped eating for days, and healing them would only mean the beginning of their recovering process.

Doors. The majority of houses and rooms in the underground settlement have been locked, to prevent more infected from coming out. There is a 50% chance that every time adventurers open a door, 1d3 infected sprint out of the place to attack.

Terrain. Most tunnels are littered with corpses or furniture. They are considered difficult terrain for the purposes of tactical movement.

Light. Since the illness spread, the underground tunnels are pitch dark. Near the entrances, daylight filters through after midday.