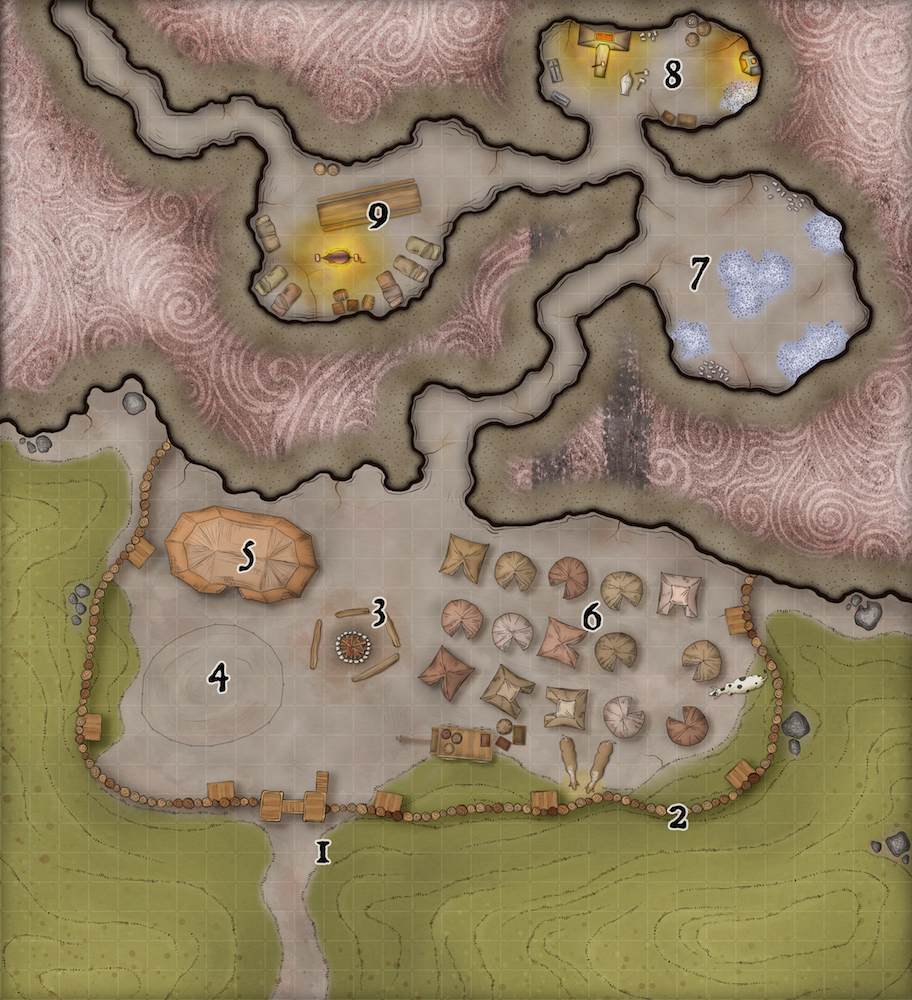 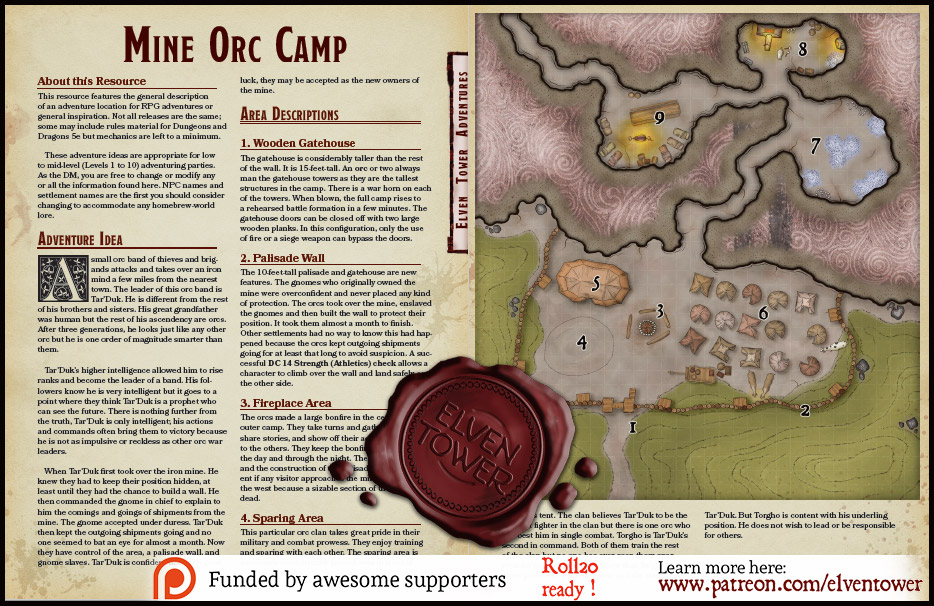 A small orc band of thieves and brigands attacks and takes over an iron mind a few miles from the nearest town. The leader of this orc band is Tar’Duk. He is different from the rest of his brothers and sisters. His great grandfather was human but the rest of his ascendency are orcs. After three generations, he looks just like any other orc but he is one order of magnitude smarter than them.

Tar’Duk’s higher intelligence allowed him to rise ranks and become the leader of a band. His followers know he is very intelligent but it goes to a point where they think Tar’Duk is a prophet who can see the future. There is nothing further from the truth, Tar’Duk is only intelligent; his actions and commands often bring them to victory because he is not as impulsive or reckless as other orc war leaders.

When Tar’Duk first took over the iron mine. He knew they had to keep their position hidden, at least until they had the chance to build a wall. He then commanded the gnome in chief to explain to him the comings and goings of shipments from the mine. The gnome accepted under duress. Tar’Duk then kept the outgoing shipments going and no one seemed to bat an eye for almost a month. Now they have control of the area, a palisade wall, and gnome slaves. Tar’Duk is confident that with good luck, they may be accepted as the new owners of the mine.

The gatehouse is considerably taller than the rest of the wall. It is 15-feet-tall. An orc or two always man the gatehouse towers as they are the tallest structures in the camp. There is a war horn on each of the towers. When blown, the full camp rises to a rehearsed battle formation in a few minutes. The gatehouse doors can be closed off with two large wooden planks. In this configuration, only the use of fire or a siege weapon can bypass the doors.

The 10-feet-tall palisade and gatehouse are new features. The gnomes who originally owned the mine were overconfident and never placed any kind of protection. The orcs took over the mine, enslaved the gnomes and then built the wall to protect their position. It took them almost a month to finish. Other settlements had no way to know this had happened because the orcs kept outgoing shipments going for at least that long to avoid suspicion. A successful DC 14 Strength (Athletics) check allows a character to climb over the wall and land safely on the other side.

The orcs made a large bonfire in the center of the outer camp. They take turns and gather here to eat, share stories, and show off their accomplishments to the others. They keep the bonfire going most of the day and through the night. The impact of this and the construction of the palisade wall is apparent if any visitor approaches the mining camp from the west because a sizable section of the forest is dead.

This particular orc clan takes great pride in their military and combat prowess. They enjoy training and sparing with each other. The sparing area is a medium-sized circular fenced area in front of Tar’Duk’s tent. The clan believes Tar’Duk to be the greatest fighter in the clan but there is one orc who can best him in single combat. Torgho is Tar’Duk’s second in command. Both of them train the rest of the clan but no one has ever seen them spar, even for fun. Both of them know that Torgho is far more proficient with the spear and the sword than Tar’Duk. But Torgho is content with his underling position. He does not wish to lead or be responsible for others.

Tar’Duk has the largest tent. Inside, the floor is covered with a motley crew of carpets and rugs of different origins. Tar’Duk’s bed is where three bear rugs are together. There is a rectangular table with a large map on it. It depicts the general area around the mine. There are many pins on the map which signal the location of many resources or interesting targets for future raids.

There is a short table with two chairs where Tar’Duk plays a game similar to chess, next to the entrance. Tar’Duk often plays by himself because the only other two orcs he thought how to play are no match for him.

The orc tents are arranged in three lines but follow little to no order otherwise. As many as 3-4 orcs sleep in each tent every night. There Tare all kind of belongings around the tents and inside them. Most of them are souvenirs from past raids or gifts from loved ones back at the main orc colony.

Seventeen gnomes still live, out of the twenty-eight they were when the orcs took over the mine. They are now slaves and must work the mines for long hours each day. A few of them are in a bad state, some are sick too. The orcs let them sleep in the chamber on the floor. The room features large quantities of iron ore. There are a few iron bars. However, since the orcs took over the mine, the smelter is not used as much as it should and most of the iron ore is in storage.

Two large metallic and stone structures dominate the room, fiery flames come from openings in their fronts. The forge and the smelter the gnomes used to process iron ore and turn it into iron bars. Both machines are in dire need of cleaning and maintenance but the orcs ignore such things. The orcs in charge of the room are content with feeding the machines with coal or wood to keep them burning. There is only one orc who knows how to use the smelter and has produced a few iron bars of inferior quality than the ones in the storage room. The orcs, in their pride, refuse to let the gnome operate this room. They consider them inferior and leave them to work the mines.

A large wooden bench-table, six sleeping pads, and a roasting pig on the fire fill the room. This was a dining and gathering are for the gnomes when the owned the mine. The passage to the north-east leads to the mine proper. The orcs seldom go that way. Instead, they demand the gnomes to go. The gnomes have quotas for the quantity of iron ore and coal they are supposed to return with. When they do not, an orc is sure to lash them with a whip.

These are the general features of the orc camp by the mine. The mine belonged to a group of gnomes who are now prisoners.

Terrain. Rolling hills surround the camp, the withering color of the grass evidence of the approaching autumn. Squares which contain an object or a part of one are considered to be difficult terrain for the purposes of tactical movement.

Palisade. A wooden 10-feet-tall palisade wall surrounds the camp. There are seven wooden platforms as tall as the wall from where archers may defend the encampment. The only gate is a wooden frame structure that supports two large wooden doors.

Light. The outside of the camp is open to the elements, lighting conditions are dependent on the weather and the time of day. Inside the mine, the only light sources are the forge and smelter (Area 8), and the fireplace in Area 9.

Smells and Sounds. The banter and smell of tens of orcs is a dominant aspect of the area immediately outside the mine. The sound of clashing metal weapons from the sparing area is common throughout the day. Inside the mine, the steady clacking of hammers echoing from the forge dominates any other sounds.