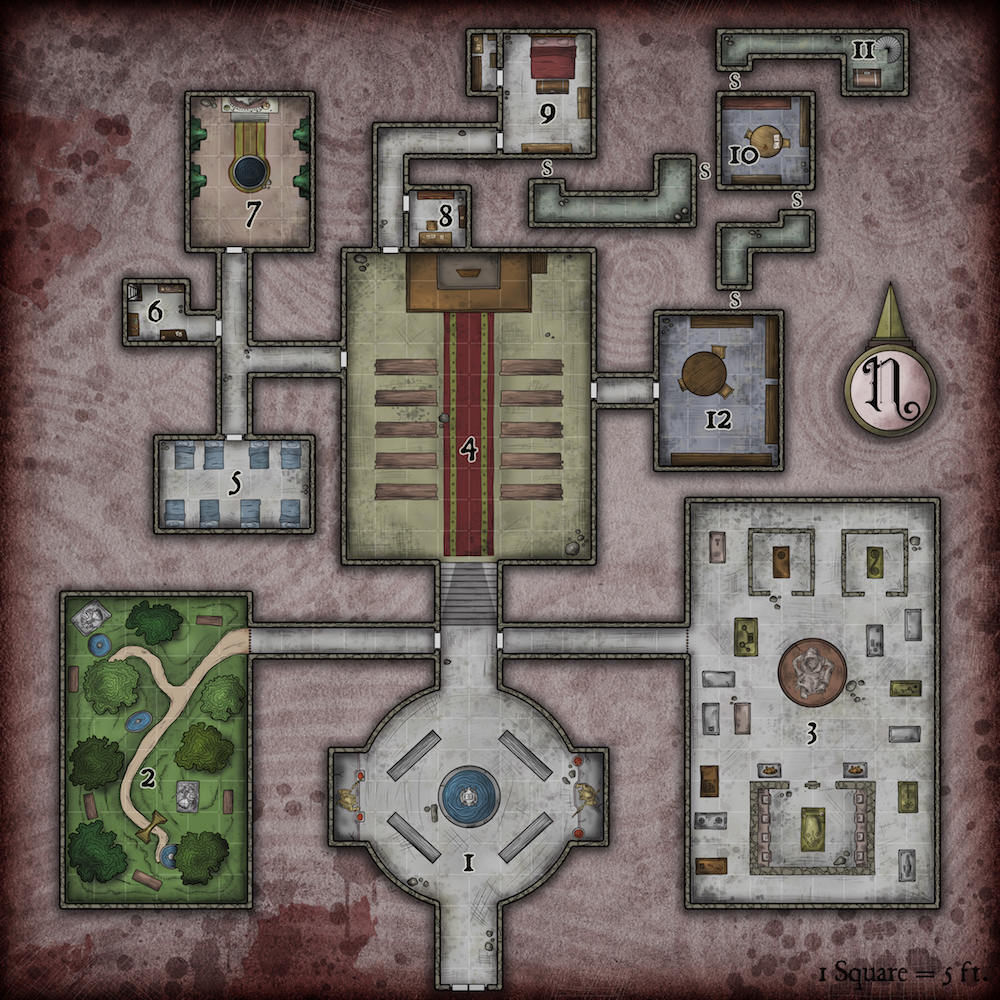 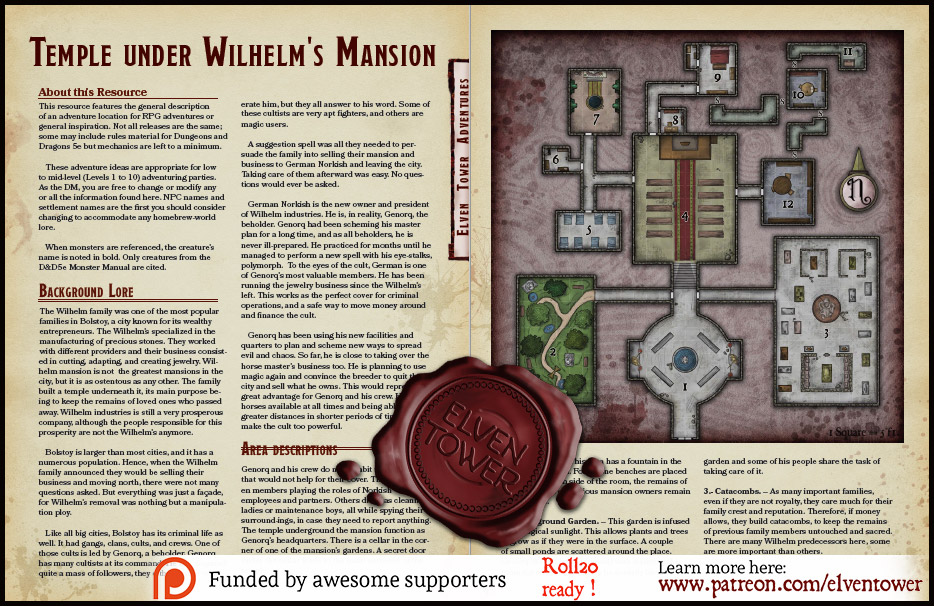 The Wilhelm family was one of the most popular families in Bolstoy, a city known for its wealthy entrepreneurs. The Wilhelm’s specialized in the manufacturing of precious stones. They worked with different providers and their business consist- ed in cutting, adapting, and creating jewelry. Wil- helm mansion is not the greatest mansions in the city, but it is as ostentous as any other. The family built a temple underneath it, its main purpose be- ing to keep the remains of loved ones who passed away. Wilhelm industries is still a very prosperous company, although the people responsible for this prosperity are not the Wilhelm’s anymore.

Bolstoy is larger than most cities, and it has a numerous population. Hence, when the Wilhelm family announced they would be selling their business and moving north, there were not many questions asked. But everything was just a façade, for Wilhelm’s removal was nothing but a manipulation ploy.

Like all big cities, Bolstoy has its criminal life as well. It had gangs, clans, cults, and crews. One of those cults is led by Genorq, a beholder. Genorq has many cultists at its command. He has acquired quite a mass of followers, they either fear or venerate him, but they all answer to his word. Some of these cultists are very apt fighters, and others are magic users.

A suggestion spell was all they needed to persuade the family into selling their mansion and business to German Norkish and leaving the city. Taking care of them afterward was easy. No ques tions would ever be asked.

German Norkish is the new owner and president of Wilhelm industries. He is, in reality, Genorq, the beholder. Genorq had been scheming his master plan for a long time, and as all beholders, he is never ill-prepared. He practiced for months until he managed to perform a new spell with his eye-stalks, polymorph. To the eyes of the cult, German is one of Genorq’s most valuable members. He has been running the jewelry business since the Wilhelm’s left. This works as the perfect cover for criminal operations, and a safe way to move money around and finance the cult.

Genorq has been using his new facilities and quarters to plan and scheme new ways to spread evil and chaos. So far, he is close to taking over the horse master’s business too. He is planning to use magic again and convince the breeder to quit the city and sell what he owns. This would represent a great advantage for Genorq and his crew. Having horses available at all times and being able to move greater distances in shorter periods of time would make the cult too powerful.

Genorq and his crew do not inhabit the mansion as that would not help for their cover. They have a doz- en members playing the roles of Norkish employees and partners. Others dress as cleaning ladies or maintenance boys, all while spying their surroundings, in case they need to report anything. The temple underground the mansion function as Genorq’s headquarters. There is a cellar in the cor- ner of one of the mansion’s gardens. A secret door under the cellar leads to the main entrance of the temple.

1.- Main Lobby. – This area has a fountain in the center of the room. Four stone benches are placed around it. To each side of the room, the remains of broken statues of previous mansion owners remain on the floors.

2.- Underground Garden. – This garden is infused with magical sunlight. This allows plants and trees to grow as if they were in the surface. A couple of small ponds are scattered around the place. Genorq did not bother himself with adapting this room for something else as he actually likes the garden and some of his people share the task of taking care of it.

3.- Catacombs. – As many important families, even if they are not royalty, they care much for their family crest and reputation. Therefore, if money allows, they build catacombs, to keep the remains of previous family members untouched and sacred. There are many Wilhelm predecessors here, some are more important than others.

4.- Main Hall. – Ten long wooden benches fill most of the room. They are placed in two rows in front of the presbytery.

5.- Cultists Rooms. – This room contains mostly beds. Some small boxes and chests are around the room, containing clothes or the cultists’ personal belongings. The room has poor light and heavy humid sweat smell. The bed sheets are weary and scratched, resembling old rags.

6.- Cultist Bathroom. – Contrasting the poor conditions of the bedroom, the cultist restroom is somewhat better, considering there is a great number of people who pay a visit every day.

7.- Shrine. – Cultists have desecrated the once hallowed shrine. It is now a place for worshiping evil. Hundreds of eyes decorate the walls, painted with blood. Being in the room makes any visitor feel observed, as if stared at. It is an uneasy feeling which cultists enjoy, though. They come here for meditation and to perform dark prayers.

8.- Main Hall’s Warehouse. – Implements and tools for evil rituals are here. A table next to the right wall shares the room with two shelves. From chalices and knives to feathers and lizard claws, ritual ingredients fill the place with a heavy aura.

9.- Main Chamber. – This is German Norkish’s room. A grandiose bed with a large chest in front of it sit in the center. This room has its own bathroom. A successful DC 15 Wisdom (perception) check allows a character to notice a secret door behind the shelf facing the bed. This passage leads to Area 10.

10.- Secret Room. – This room can be accessed from either Area 9 or Area 12. This room contains the cult’s most valuable treasures. A successful DC 20 Wisdom (perception) check allows a character to notice a secret door, behind a wooden shelf. This passage leads to Area 11.

11.- Genorq Treasure Room. – This is the secret room of the secret room. Genorq’s intention is to keep his personal belongings far from enemy hands. He keeps gold rings and bracelets socketed with precious stones such as emeralds and amethysts. Silver crowns and tiaras, on top of piles of gold. Everything in a wooden chest, which is the only thing filling the room.

The chest has a secret compartment itself, hidden on the lid. A successful DC 20 Wisdom (percep- tion) check allows a character to notice the secret compartment. It contains Genorq’s diary, a small leather-covered book with a big eye drawn on it. There is a set of stairs in this room. They lead to an underground tunnel, it is Gernoq’s last resort to escape.

12.- Conference Room. – Cultists use this room to gather and talk among themselves, reserving the Main Hall (Area 4) for Genorq’s meetings and assemblies. A small improvised kitchen was adapted to one of the tables. A successful DC 15 Wisdom (perception) check allows a character to notice a secret passage under the kitchen’s table. This pas- sage leads to Area 10.

Genorq. – A beholder who took over Wilhelm’s jewelry company by manipulating the family. He now controls the business with his crew. He poly- morphed himself into German Norkish, in honor to his own beholder name. He always assumes this form when dealing with the people in the city, and to deliver important messages to his crew. But he assumes his real form when he wants to have an important meeting at the Main Hall (Area 4), or intimidate his subjects. He has a diary hidden in Area 11, where he describes his life and exploits. Vanity got the best of him and he could not resist. He had to create evidence of his work. He sometimes asks one of his goons to read the diary for him when he wants to be proud of himself and feel praised. The diary is written in a third-person point of view, and having been redacted by Genorq himself, the small book describes everything he does in a godly manner, exaggerating detail over detail.

German Norkish. – Genorq’s false identity. German is very charismatic and clever. He knows how to do business well and runs operations smoothly. He is persuasive and assertive. The cultists do not suspect about German’s real identity. When Genorq presents himself in his real form, no one even notices German is not there, due to all the attention being drawn by the Beholder. And when German is speaking in Genorq’s behalf, cultists have no reason to distrust what he is saying as they know Genorq is too busy and important to waste time in stupid announcements. But Genorq does not care about having to work and dedicate time to his façade. He enjoys deceiving even his own goons and overall, he distrusts them. He wants to know everything, he looks to be aware of everything, he desires to see everything.

In the case Genorq is confronted by a group of adventurers, he will fight along his cultists, taking advantage of everything he can. Genorq prefers to draw his enemies to his lair, to have the battle in the Main Hall (Area 4).