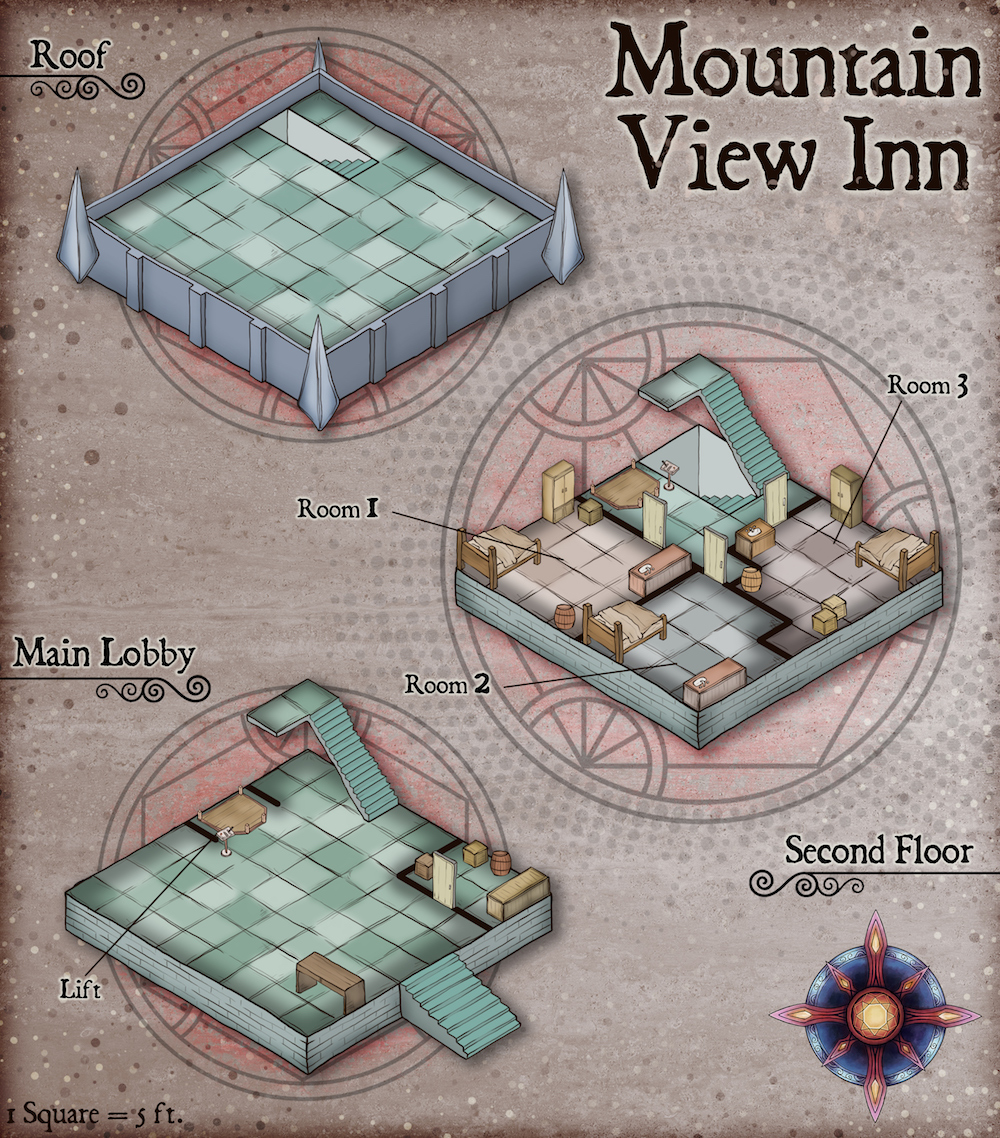 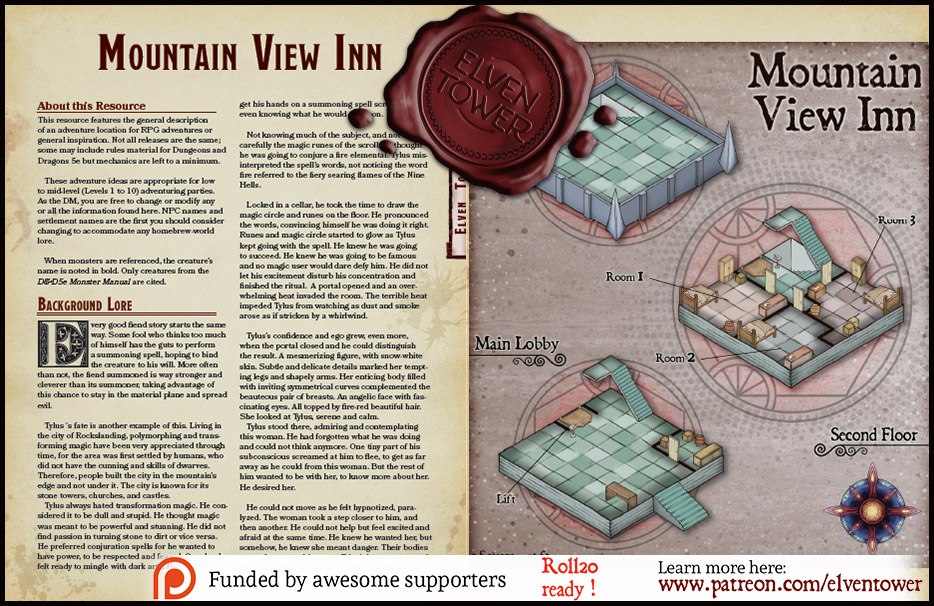 Every good fiend story starts the same way. Some fool who thinks too much of himself has the guts to perform a summoning spell, hoping to bind the creature to his will. More often than not, the fiend summoned is way stronger and cleverer than its summoner, taking advantage of this chance to stay in the material plane and spread evil.

Tylus´s fate is another example of this. Living in the city of Rockslanding, polymorphing and transforming magic have been very appreciated through time, for the area was first settled by humans, who did not have the cunning and skills of dwarves. Therefore, people built the city in the mountain’s edge and not under it. The city is known for its stone towers, churches, and castles.

Tylus always hated transformation magic. He considered it to be dull and stupid. He thought magic was meant to be powerful and stunning. He did not find passion in turning stone to dirt or vice versa. He preferred conjuration spells for he wanted to have power, to be respected and feared. One day, he felt ready to mingle with dark arts. He managed to get his hands on a summoning spell scroll, without even knowing what he would summon.

Not knowing much of the subject, and not reading carefully the magic runes of the scroll, he thought he was going to conjure a fire elemental. Tylus misinterpreted the spell’s words, not noticing the word fire referred to the fiery searing flames of the Nine Hells.

Locked in a cellar, he took the time to draw the magic circle and runes on the floor. He pronounced the words, convincing himself he was doing it right. Runes and magic circle started to glow as Tylus kept going with the spell. He knew he was going to succeed. He knew he was going to be famous and no magic user would dare defy him. He did not let his excitement disturb his concentration and finished the ritual. A portal opened and an overwhelming heat invaded the room. The terrible heat impeded Tylus from watching as dust and smoke arose as if stricken by a whirlwind.

Tylus’s confidence and ego grew, even more, when the portal closed and he could distinguish the result. A mesmerizing figure, with snow-white skin. Subtle and delicate details marked her tempting legs and shapely arms. Her enticing body filled with inviting symmetrical curves complemented the beauteous pair of breasts. An angelic face with fascinating eyes. All topped by fire-red beautiful hair. She looked at Tylus, serene and calm.

Tylus stood there, admiring and contemplating this woman. He had forgotten what he was doing and could not think anymore. One tiny part of his subconscious screamed at him to flee, to get as far away as he could from this woman. But the rest of him wanted to be with her, to know more about her. He desired her.

He could not move as he felt hypnotized, paralyzed. The woman took a step closer to him, and then another. He could not help but feel excited and afraid at the same time. He knew he wanted her, but somehow, he knew she meant danger. Their bodies were almost touching now. Tylus’s heart was pounding so hard he could hear it; he felt as if his chest was about to burst. He could not take his eyes away from hers, and he felt as if her stare burned him. And just when he felt he was about to fade out, she kissed him. All negative feelings vanished. He felt safe; nothing could harm him.

This is the last thing Tylus remembers. It was the last day people in Rockslanding heard about him too. He has been missing since. No one was very fond of him, though. The search parties did not last long and stopped looking for him.

Fiends are intelligent creatures, more than demons. Thus, contrary to their Abyss counterparts, fiends enjoy playing with their preys’ minds. They bask in their victim’s sorrow and despair and succubi are not any different.

She wanted more servants and followers so she thought of a way of having access to a constant flow of people. She first opted for a family. Taking the role of the wife and dominating the minds of the husband and their two young adult sons, she got to know the city more and learned about her surroundings. When she had enough information about the city, she took care of the family by deceiving everyone. She made all people who knew the family believe they were moving out of town for good. The family packed all their belongings and parted. Once they were far enough, away from unwanted eyes, she dispatched the family and consumed their souls.

She came back to the city to visit “Mountain View”, a famous inn in the city. Popular due to its great sunrises. The owner there is Wesbley Sneijderlin, a gnome. He manages the 4-story building. The gnome not resist the succubus charm either and fell under her spell.

It’s been about six moons since Wesbley ceased to exist. The succubus has taken his place polymorphing herself. She charms all travelers who sleep there. She makes them think they had the best time of their lives. This has caused the place to earn more popularity and prestige. What she wants are more potential victims. Any traveler who is just passing by works as prey.

Her modus operandi is as follows:

She identifies victims as any traveler or group of travelers that are not staying in the city for more than a week or two. This is so the citizens of Rockslanding, nor the victims, get to know each other.

She applies the same method as with the family half a year ago. Only this time she does not have to bluff about a change of residence. Once travelers end their stay the Mountain View, all she has to do is wait for them to be at the right spot for action. She flies through the night unseen, switching through the Ethereal and Material planes as she wishes. She ambushes travelers, enticing and alluring all who try to defy her.

If travelers discover Wesbley’s real identity before she ambushes them out of the city, she flees to the roof (Area 5) of the tower to confront her enemies. She does not assume her true form yet, taking advantage of the other travelers who defend the poor old Gnome from harm; the adventurers’ accusations are not enough to break the fiend’s charm over the others.

1.- Main Lobby. – The front desk of the inn is nice and cozy. There is an ongoing heating spell on the building so it always is at the right temperature. It has a small storage room with boxes of sheets, ale barrels, and the like. The room also has a magical lift. It is programmed to work by the commands of numbers. The number said corresponds to the first (Area 1), second (Area 2), third (Area 3) and fourth floor (Area 4). The roof (Area 5) is accessed by the stairs on the fourth floor.

2.- Second Floor. – This part of the tower has three rooms. Each identical to the others. A big bed, an armoire, one or two containers such as boxes or chests, and a small desk. The lift on this floor has a small hallway and the stairs go on to the next level.

3.- Third Floor. – (Not shown in the picture) This level of the tower is similar to the last. There are three rooms as well on this level, but they are smaller than the others. There are meant for individual travelers who do not wish to share their bedroom with anyone. This level also has a kitchen. The lift on this level has a smaller hallway than the last level due to the organization of the rooms, and the set of stairs continue to the fourth floor. (Area 4)

4.- Fourth Floor. – (Not shown in the picture) This level is reserved for the Wesbley’s room (which is now occupied by the succubus), and a pair of storage rooms. The lift on this room has more space between it and the doors of the storage rooms and the Master Bedroom.

5.- Roof. – This part of the tower is only accessed by the stairs. The magical lift does not answer to commands above number four. If the adventurers meet the succubus here for confrontation, she fights as Wesbley, and she is defended by his friends and other clients who are there to witness what is going on.

Terrain. The tower is built with huge blocks of stone finely shaped by transformation magic.

Doors. The wooden doors look new and clean; a fine varnish gives them a warm glow.

Light. The first three levels of the tower have chandeliers in the center. Torches on the walls light all of the rooms as well as the fourth floor. All of these are infused with a continual flame spell. The roof has no light sources and is subject to the time of day and weather conditions.