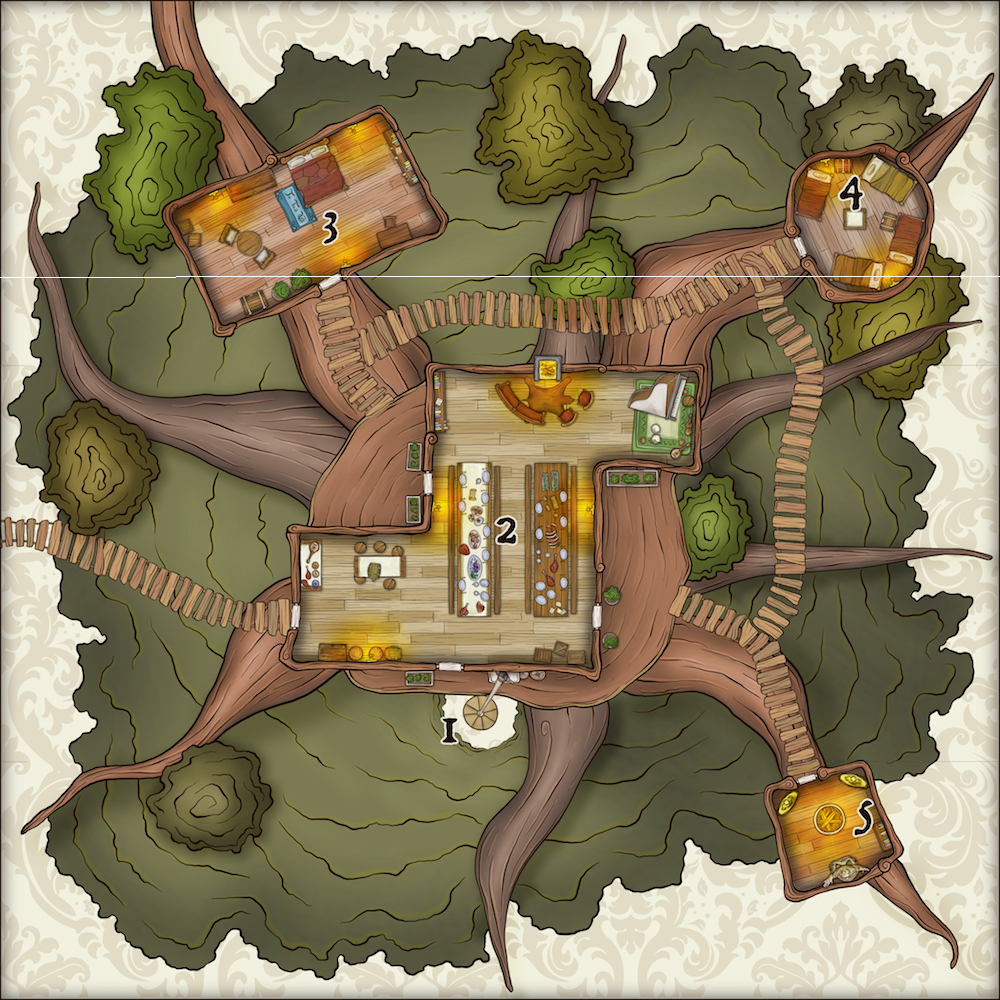 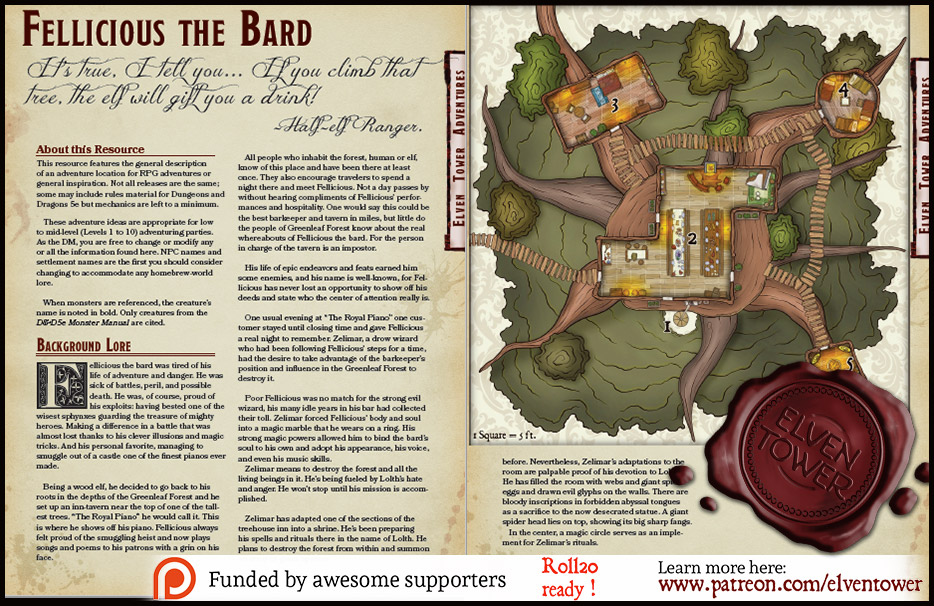 Fellicious the bard was tired of his life of adventure and danger. He was sick of battles, peril, and possible death. He was, of course, proud of his exploits: having bested one of the wisest sphynxes guarding the treasure of mighty heroes. Making a difference in a battle that was almost lost thanks to his clever illusions and magic tricks. And his personal favorite, managing to smuggle out of a castle one of the finest pianos ever made.

Being a wood elf, he decided to go back to his roots in the depths of the Greenleaf Forest and he set up an inn-tavern near the top of one of the tallest trees. “The Royal Piano” he would call it. This is where he shows off his piano. Fellicious always felt proud of the smuggling heist and now plays songs and poems to his patrons with a grin on his face.

All people who inhabit the forest, human or elf, know of this place and have been there at least once. They also encourage travelers to spend a night there and meet Fellicious. Not a day passes by without hearing compliments of Fellicious’ performances and hospitality. One would say this could be the best barkeeper and tavern in miles, but little do the people of Greenleaf Forest know about the real whereabouts of Fellicious the bard. For the person in charge of the tavern is an impostor.

His life of epic endeavors and feats earned him some enemies, and his name is well-known, for Fellicious has never lost an opportunity to show off his deeds and state who the center of attention really is.

One usual evening at “The Royal Piano” one customer stayed until closing time and gave Fellicious a real night to remember. Zelimar, a drow wizard who had been following Fellicious’ steps for a time, had the desire to take advantage of the barkeeper’s position and influence in the Greenleaf Forest to destroy it.

Poor Fellicious was no match for the strong evil wizard, his many idle years in his bar had collected their toll. Zelimar forced Fellicious’ body and soul into a magic marble that he wears on a ring. His strong magic powers allowed him to bind the bard’s soul to his own and adopt his appearance, his voice, and even his music skills.

Zelimar means to destroy the forest and all the living beings in it. He’s being fueled by Lolth’s hate and anger. He won’t stop until his mission is accomplished.

Zelimar has adapted one of the sections of the treehouse inn into a shrine. He’s been preparing his spells and rituals there in the name of Lolth. He plans to destroy the forest from within and summon an army of giant spiders.

By day, he fools everyone playing the role of the elf-bard who’s loved and admired. But at night, he spends hours in his shrine, plotting and planning the forest’s destruction.

The evil wizard has been perfecting his plan for over two moons now, and if no one does anything to stop him, the Greenleaf Forest will cease to exist.

When the time is right, Zelimar will release Fellicious from his prison, only to frame him for everything that happened under his roof.

1.- Access Pulley. Due to the height of the tree, most travelers ride the pulley-powered elevator to the inn. It is considered to be one of the appealing features of the place. However, many skilled and strong folks prefer climbing the tree as a sport, stating that it is part of the experience of visiting “The Royal Piano”. Fellicious gives a drink for free to all those brave adventurers who climb to his bar without using the elevator, climbing equipment, or magic.

A successful DC 18 Strength (Athletics) check allows a character to climb the tree and get to the tavern.

2.- Main Hall. This is the room where drinks and food are served. The famous piano lays at the top right corner of the room and there is a brown bear pelt placed as a carpet as a decoration for the fireplace. Two great tables fill the center of the room and a small kitchen is found at the left.

3.- Fellicious’ Room. Besides the big bed and the small set of a table with two chairs, the room is mostly empty. The only difference, now that Zelimar has taken over the tavern, is the necromancy books on the shelf. Zelimar also keeps the room locked and has set an alarm spell on the door to let him know if someone trespasses. Adventurers can try to dispel the spell with a successful DC 18 Intelligence (Arcana) check. Inside the room, a successful DC 13 Wisdom (Perception) check allows a character to spot the nefarious books.

4.- Guests’ Room. This room has four beds in it. There is word that groups of eight people have asked to be allowed to stay. Tolerating the fact of sleeping on the floor or sharing beds, as long as they get to spend a night on the famous inn and wake up to the sound of Fellicious’ piano. The room has a chest which is usually empty.

5.- Lolth’s Shrine. An illusion spell makes the room look as it was before. Nevertheless, Zelimar’s adaptations to the room are palpable proof of his devotion to Lolth. He has filled the room with webs and giant spider eggs and drawn evil glyphs on the walls. There are bloody inscriptions in forbidden abyssal tongues as a sacrifice to the now desecrated statue. A giant spider head lies on top, showing its big sharp fangs.

In the center, a magic circle serves as an implement for Zelimar’s rituals.

This is one of the tallest trees of the Greenleaf Forest. The tree is about 300-feet-tall, hence the difficulty to climb it. Its trunk is strong, the bark rough and hard to the touch. It’s a very healthy tree with strong long branches and soft green leaves.

Terrain. The soil of the forest around the tree of the tavern is nice and good for traveling. There is a reasonably kept road because of the popularity of the tavern, the road leads outside the forest to the east and the west, ignoring the villages and tribes of wood elves that inhabit Greenleaf Forest.

The floor of the tavern and its rooms is a strong wooden floor. The passages connecting each of the rooms are one-person wide, and cannot support more than four people at a time. (The wooden passage connecting Area 4 and 5 is rigged to break once Zelimar takes over).

Doors. All doors are wooden varnished oak doors with elven details and decorations. The door to Area 5 is locked.

Light. All the rooms except Area 5 are lighted by torches on the walls. Area 5 is completely dark.

Smells and Sounds. The smell of the forest is nice and healthy but since Zelimar got rid of Fellicious, he’s been working his magic and little by little the forest has been losing its charm. At night, once all the customers have left, if the adventurers are resting or sleeping in Area 4, a successful DC 20 Wisdom (Perception) check allows a character to hear mumblings and whisperings coming from Area 5. This is Zelimar working on his dark rituals to destroy the forest.