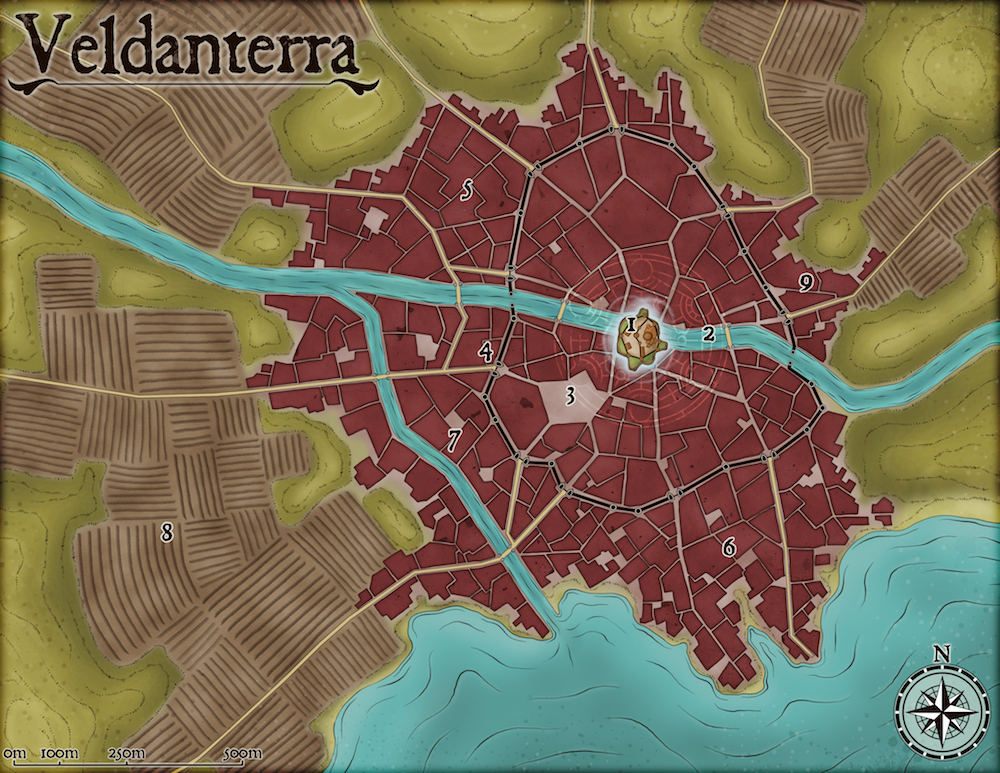 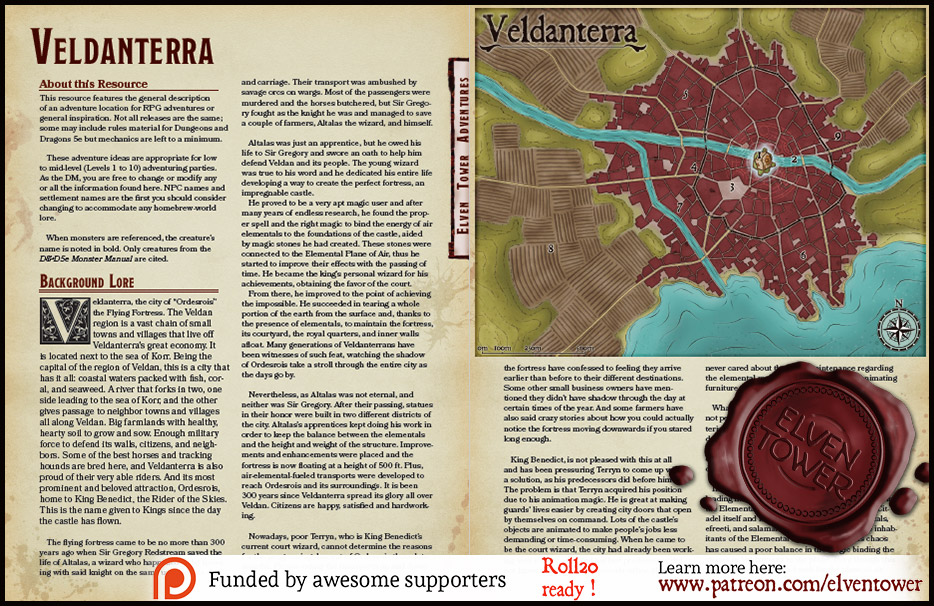 Veldanterra, the city of “Ordesrois” the Flying Fortress. The Veldan region is a vast chain of small towns and villages that live off Veldanterra’s great economy. It is located next to the sea of Korr. Being the capital of the region of Veldan, this is a city that has it all: coastal waters packed with fish, coral, and seaweed. A river that forks in two, one side leading to the sea of Korr, and the other gives passage to neighbor towns and villages all along Veldan. Big farmlands with healthy, hearty soil to grow and sow. Enough military force to defend its walls, citizens, and neighbors. Some of the best horses and tracking hounds are bred here, and Veldanterra is also proud of their very able riders. And its most prominent and beloved attraction, Ordesrois, home to King Benedict, the Rider of the Skies. This is the name given to Kings since the day the castle has flown.

The flying fortress came to be no more than 300 years ago when Sir Gregory Redstream saved the life of Altalas, a wizard who happened to be traveling with said knight on the same unfortunate day and carriage. Their transport was ambushed by savage orcs on wargs. Most of the passengers were murdered and the horses butchered, but Sir Gregory fought as the knight he was and managed to save a couple of farmers, Altalas the wizard, and himself.

Altalas was just an apprentice, but he owed his life to Sir Gregory and swore an oath to help him defend Veldan and its people. The young wizard was true to his word and he dedicated his entire life developing a way to create the perfect fortress, an impregnable castle.

He proved to be a very apt magic user and after many years of endless research, he found the proper spell and the right magic to bind the energy of air elementals to the foundations of the castle, aided by magic stones he had created. These stones were connected to the Elemental Plane of Air, thus he started to improve their effects with the passing of time. He became the king’s personal wizard for his achievements, obtaining the favor of the court.

From there, he improved to the point of achieving the impossible. He succeeded in tearing a whole portion of the earth from the surface and, thanks to the presence of elementals, to maintain the fortress, its courtyard, the royal quarters, and inner walls afloat. Many generations of Veldanterrans have been witnesses of such feat, watching the shadow of Ordesrois take a stroll through the entire city as the days go by.

Nevertheless, as Altalas was not eternal, and neither was Sir Gregory. After their passing, statues in their honor were built in two different districts of the city. Altalas’s apprentices kept doing his work in order to keep the balance between the elementals and the height and weight of the structure. Improvements and enhancements were placed and the fortress is now floating at a height of 500 ft. Plus, air-elemental-fueled transports were developed to reach Ordesrois and its surroundings. It is been 300 years since Veldanterra spread its glory all over Veldan. Citizens are happy, satisfied and hardworking.

Nowadays, poor Terryn, who is King Benedict’s current court wizard, cannot determine the reasons for the progressing descent of Ordesrois these late months. People riding the transports up and down the fortress have confessed to feeling they arrive earlier than before to their different destinations. Some other small business owners have mentioned they didn’t have shadow through the day at certain times of the year. And some farmers have also said crazy stories about how you could actually notice the fortress moving downwards if you stared long enough.

King Benedict, is not pleased with this at all and has been pressuring Terryn to come up with a solution, as his predecessors did before him. The problem is that Terryn acquired his position due to his animation magic. He is great at making guards’ lives easier by creating city doors that open by themselves on command. Lots of the castle’s objects are animated to make people’s jobs less demanding or time-consuming. When he came to be the court wizard, the city had already been working well for decades and his last predecessor did not know much of air elementals either. Hence, he never cared about the city’s maintenance regarding the elemental magic and rather kept busy animating furniture and kitchen tools.

Imix, the Prince of evil fire creatures has been leading his armies to the Citadel of Ice and Steel in the Elemental Plane of Air, trying to usurp the Citadel itself and keep it for himself. Fire elementals, efreeti, and salamanders wage a war with the inhabitants of the Elemental Plane of Air. All this chaos has caused a poor balance in the magic binding the stones in Veldanterra to the plane. Even though this elemental war could end well for the plane of air, it is just a matter of time for the chaos of war and violence to break the connection completely.

Bad omens of a definite fall of Ordesrois have not yet appeared in the mouths of Veldanterran priests but if things continue as they are now, the region of Veldan could suffer the hardest blow of its history.

The situation and real height of the fortress will be clear and evident to the eye in one moon. This is what Hemet; a sorcerer scholar, has inferred from what he has observed. He specializes in elemental travel and the planes. He is looking for someone to help him. He is suspicious of something odd and off going on in the Elemental Plane of Air but he does not have the means to confirm it for he knows it is dangerous to go, even more so alone.

Ordesrois is in the hands of Terryn, an ill-abled wizard. 100ft below its usual height, falling. Its fate sealed.

1.- Ordesrois. This is the name of the flying district. The magnificent flying fortress is 500 ft above the city. The Rider’s Castle is not that prominent itself. But with its inner walls, the royal stables and quarters, and a small royal district for the noble population, the view from Ordesrois is stunning. Nothing but mere air keeps this enormous piece of ground floating.

2.- River District. The city walls are divided by the river. The north part of it is the River District. Wealthy people inhabit the big, nice, stone houses. These people are important military members, some belong to lesser court participants, and some others to big merchants, owners of various horse stables or the like. The Riverside Inn is a great place to stay if you have the means to afford it. A statue held in the name of Altalas is here.

3.- Military District. The best horse riders are here. There is a training ground west of the district where they hold military routine exercises daily. Sir Fregor, a direct descendant of Sir Gregory, is a very influential man in the ranks of Veldanterra. He is the third in command and people say he is the reincarnation of Sir Gregory himself. Adventurers can find the statue build in honor of Sir Gregory here.

4.- Almost Inn. This is the name for the inn that is almost inside the walls. Its catchy name has made it very popular and many travelers prefer this to the luxury at the Riverside Inn. The bartender is Barret.

5.- Horse District. This is the place where most farmers, tailors, fishermen, and the like live. Its name comes from the smell of the place. It has a lot of transit and people have started to believe horses have come to acquire the habit of defecating only when they pass by this district.

6.- Port. The port is very similar to the Horse District, but for the difference in its smell. The strong smell of fish and the sea fills the place. There are many bars and taverns although nightlife in Veldanterra is not very active.

7.- Veldan Stables and Kennels. The best breeders in town. Veldanterra has great military and farming horses. Their kennels have provided the city with great hounds for years. They have shepherd dogs, tracking hounds, and even some canine guard members. The King ordered to have a guard dog for himself. The most important breeder there is Fosco, a halfling.

8.- Farmlands. The lands of Veldanterra are vast and healthy. Fruits and vegetables are grown all year round and brought to the city markets. However, one of the city’s specialties is tobacco. Exportation of these goods has been popular in late years.

9.- Hemet’s house. This is the house of the scholar who could be the city’s salvation. Hemet is seldom at home. He frequents the Almost Inn every day looking for people who could have the ability to help him.

King Benedict. – The current King is fair, just, and kindhearted. He is stressed and overworked lately, thinking on ways to help Terryn with his dilemma. He is worried about being “the King that let the castle fall” and be remembered as such. His huge black guard dog Faustus is always by his side.

Barret. – He is the barkeeper at the Almost Inn and he is known for his skills in horseback riding. He is the undefeated champion in the traditional race that consists in doing a complete tour around the city walls. He knows Hemet due to his permanent presence over the past few months, although he does not like him very much because he seldom orders something to drink. He only knows he is looking for mercenaries, bounty hunters, or the like.

Terryn. – He is a wizard specialized in animation magic. He has low self-esteem and he is hard to talk to. He is frustrated for being stuck in a situation he does not even understand. He does not feel it is his responsibility to fix something he did not do in the first place. He knows that he has to do something for he would not enjoy losing his position and privileges, but he is running out of ideas.

Hemet. – This scholar has been visiting the Almost Inn for months now. He is trying to find people to help him in his quest. He plans to open a portal to the Elemental Plane of Air and find out what’s going on there. He is certain the poor connection of the stones has to do with the plane’s atmosphere. He is the key for the city’s salvation.

Fosco. – An expert breeder. He is responsible for the birth of Faustus, the King’s dog. And he is the owner of Faustus’s dad. Bruno is a battle dog that Fosco rides. He is a good rider and he sometimes practices military drills in the training grounds with the army. He is a friend of Sir Fregor.

Sir Fregor. – A knight to look up to. Sir Fregor is strong, tall, and very skilled in battle. He would do anything to protect Veldanterra and its people. Honoring the memory of his predecessors. He obtained the post of third in command thanks to his exploits in battle.