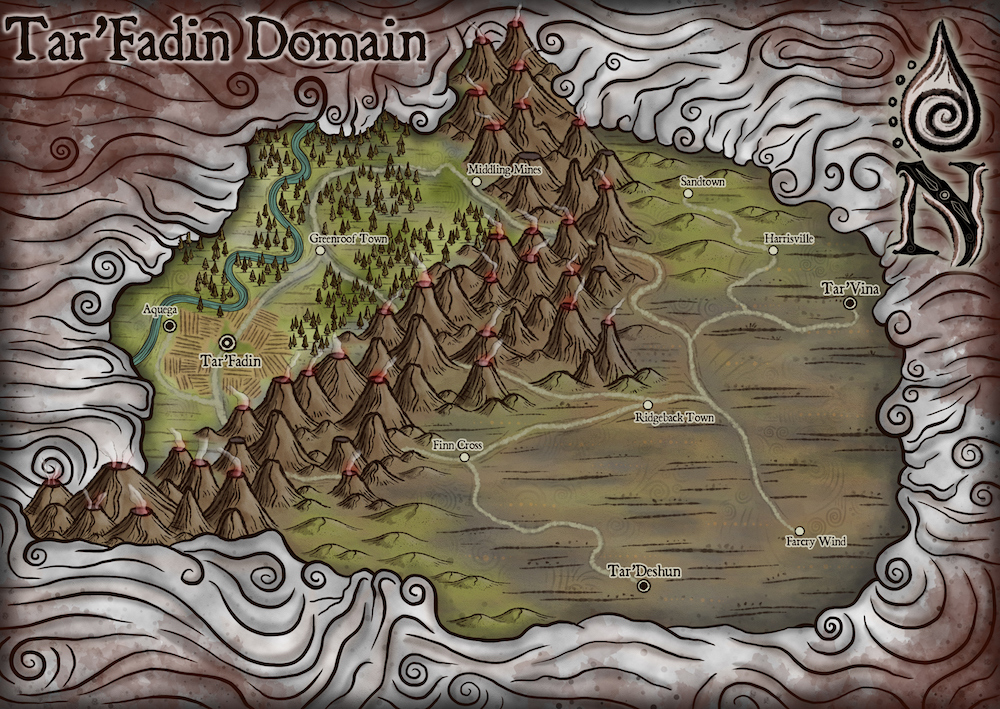 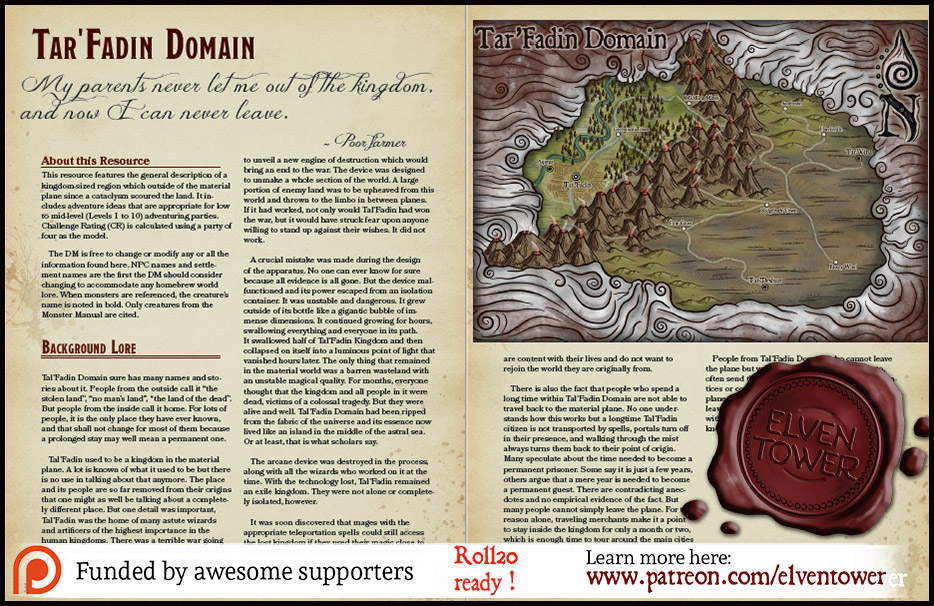 This resource features the general description of a kingdom-sized region which outside of the material plane since a cataclysm scoured the land. It includes adventure ideas that are appropriate for low to mid-level (Levels 1 to 10) adventur­ing parties. Challenge Rating (CR) is calculated using a party of four as the model.

Tal’Fadin Domain sure has many names and stories about it. People from the outside call it “the stolen land”, “no man’s land”, “the land of the dead”. But people from the inside call it home. For lots of people, it is the only place they have ever known, and that shall not change for most of them because a prolonged stay may well mean a permanent one.

Tal’Fadin used to be a kingdom in the material plane. A lot is known of what it used to be but there is no use in talking about that anymore. The place and its people are so far removed from their origins that one might as well be talking about a completely different place. But one detail was important, Tal’Fadin was the home of many astute wizards and artificers of the highest importance in the human kingdoms. There was a terrible war going on back then, and the wizards brought their spells of destruction with them to fuel the machine of war that was Tal’Fadin Domain. One day, they decided to unveil a new engine of destruction which would bring an end to the war. The device was designed to unmake a whole section of the world. A large portion of enemy land was to be upheaved from this world and thrown to the limbo in between planes. If it had worked, not only would Tal’Fadin had won the war, but it would have struck fear upon anyone willing to stand up against their wishes. It did not work.

A crucial mistake was made during the design of the apparatus. No one can ever know for sure because all evidence is all gone. But the device malfunctioned and its power escaped from an isolation container. It was unstable and dangerous. It grew outside of its bottle like a gigantic bubble of immense dimensions. It continued growing for hours, swallowing everything and everyone in its path. It swallowed half of Tal’Fadin Kingdom and then collapsed on itself into a luminous point of light that vanished hours later. The only thing that remained in the material world was a barren wasteland with an unstable magical quality. For months, everyone thought that the kingdom and all people in it were dead, victims of a colossal tragedy. But they were alive and well. Tal’Fadin Domain had been ripped from the fabric of the universe and its essence now lived like an island in the middle of the astral sea. Or at least, that is what scholars say.

The arcane device was destroyed in the process, along with all the wizards who worked on it at the time. With the technology lost, Tal’Fadin remained an exile kingdom. They were not alone or completely isolated, however.

It was soon discovered that mages with the appropriate teleportation spells could still access the lost kingdom if they used their magic close to the wasteland in the material plane. Additionally, a few natural portals in the wasteland exist. They connect to some specific locations in Tal’Fadin Domain. The most used one is 1 kilometer from the wasteland’s border. It leads travelers to Tal’Fadin city, to the main square. Despite the abundant portals, using them does not come without risks. Some work better than others but not a single one of them has been found to be fault-free. Using any portal, the traveler runs the risk of ending up in a different location than expected. The unintended location can be any spot within Tal’Fadin Domain. There are tales of a few unfortunate folks who used a portal and ended up in dangerous locations like the high peaks in the mountain range, the deepest parts of the eastern wasteland, or the mouth of an active volcano. For this reason, a cautious traveler or merchant often carries equipment for cold and dry climates, as well as day-rations for double the days needed for such a voyage.

Tal’Fadin Domain is surrounded by thick clouds of mist. They are visible in most outdoors places. People feared them a long time ago, but they are now just a fixed and boring part of the landscape. The mist border has never moved since Tal’Fadin moved into the pocket plane. The mist is thick and heavy on the lungs. If a person tries to find a way through the mist, there is a 25% chance they will reach the material plane, otherwise, they emerge from the mists inside Tal’Fadin Domain but in a different random location. This is the lowest probability method. Seldom anyone attempts it.

The death of the high magocracy in Tal’Fadin Domain and the semi-isolated state of the place changed the people that live within it. New smaller regions were born, politics changed and life changed. The three kingdoms are Tal’Fadin in the west, Tar’Deshun in the south of the desert, and Tar’Vina in the northern part of the desert. The three small kingdoms have coexisted for almost two-hundred years without war. There is no reason for wars because an expansionist push would not really amount to much. Nor is any of the three kingdoms restricted in resources. The permanent temperate weather means that farms produce crops all year round, livestock can breed more often, even the desert is not too inhospitable because it rains often. The region is small enough that the central mountain range is always in sight so navigation is simple, even without the presence of any stars.

Tal’Fadin City is the most visited place in the region. The ruined remains of the ancient artifact that isolated the kingdom were brought out of the castle ruins and placed in a park square for everyone to see. It now stands as a monument for human greed for power. Some mages and scholars visit the place to analyze the broken device from time to time. There is not much enough to work from, however. Must leave empty-handed since there is no clear understanding of how it worked. But many believers still think that if a brilliant mage managed to decipher how the device functioned, he may be able to fix it and perhaps help the people of Tal’Fadin Domain return to the material world. This herculean quest has little possibilities of even being achievable. But even if the device were fixed, many people in Tal’Fadin Domain might actually rule for it not to be used. Most people within the pocket kingdom are content with their lives and do not want to rejoin the world they are originally from.

There is also the fact that people who spend a long time within Tal’Fadin Domain are not able to travel back to the material plane. No one understands how this works but a longtime Tal’Fadin citizen is not transported by spells, portals turn off in their presence, and walking through the mist always turns them back to their point of origin. Many speculate about the time needed to become a permanent prisoner. Some say it is just a few years, others argue that a mere year is needed to become a permanent guest. There are contradicting anecdotes and no empirical evidence of the fact. But many people cannot simply leave the plane. For this reason alone, traveling merchants make it a point to stay inside the kingdom for only a month or two, which is enough time to tour around the main cities to make business and then go back to the material plane.

People from Tal’Fadin Domain who cannot leave the plane but want their young kids to be able to, often send their children with merchants as apprentices or companions. If they return to the material plane often enough, they never lose the ability to leave. Such people born in Tal’Fadin Domain but with the ability to go to the material plane are known as “Otherworlders”.

These are the general features of Tal’Fadin Domain. The region lives in a pocket finite plane. It features its own climate but there is no change of seasons, living a permanent autumn.

Terrain. Tal’Fadin Domain is divided by a volcanic mountain range. The western section is lush and warm with rolling grasslands and deep forests. The region east of the mountains is a dry wasteland. Lighting and climate are stable and unchanging in both sections.

Light. There are no sun, moon, or stars in the domain, but a neutral light with no clear source imitates the movements of an unseen sun. Day and night follow the same patterns as the material plane. The light also generates heat as if it were autumn.

Seasons. The neutral lighting conditions of the domain are stable enough that there is no change of seasons. Tal’Fadin Domain is permanently in autumn. This does not mean that plants feature their orange-tinted leaves and overall behavior. Tal’Fadin Domain has been in this plane for over two hundred years. Plants have now adapted and do not shed their foliage during what would be winter time.

Access. Teleportation spells close to the wasteland in the material plane work as intended. Additionally, there are a few hidden portals in the wasteland. Places where direct travel is easy. The most important one is near the border of the wasteland, it leads to Tar’Fadin’s main square. Most merchants still use it despite the risk of it malfunctioning.