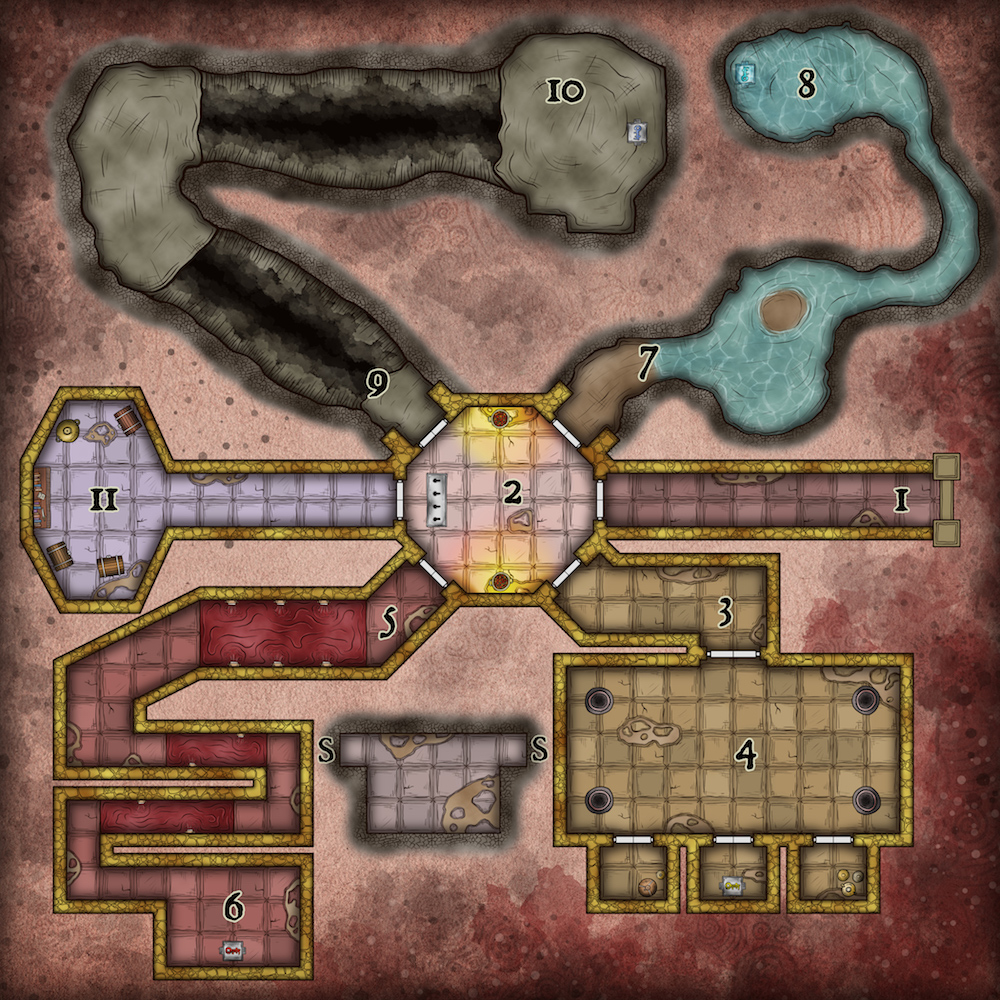 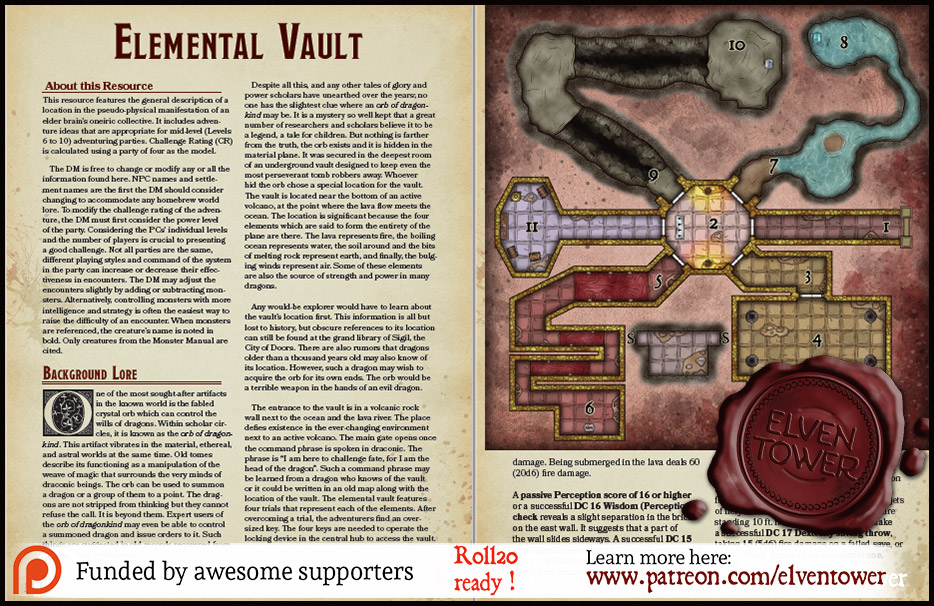 This resource features the general description of a location in the pseudo-physical manifestation of an elder brain’s oneiric collective. It includes adventure ideas that are appropriate for mid-level (Levels 6 to 10) adventur­ing parties. Challenge Rating (CR) is calculated using a party of four as the model.

One of the most sought-after artifacts in the known world is the fabled crystal orb which can control the wills of dragons. Within scholar circles, it is known as the orb of dragonkind. This artifact vibrates in the material, ethereal, and astral worlds at the same time. Old tomes describe its functioning as a manipulation of the weave of magic that surrounds the very minds of draconic beings. The orb can be used to summon a dragon or a group of them to a point. The dragons are not stripped from thinking but they cannot refuse the call. It is beyond them. Expert users of the orb of dragonkind may even be able to control a summoned dragon and issue orders to it. Such things are suggested in old records recovered from ancient giant civilizations.

Despite all this, and any other tales of glory and power scholars have unearthed over the years; no one has the slightest clue where an orb of dragonkind may be. It is a mystery so well kept that a great number of researchers and scholars believe it to be a legend, a tale for children. But nothing is farther from the truth, the orb exists and it is hidden in the material plane. It was secured in the deepest room of an underground vault designed to keep even the most perseverant tomb robbers away. Whoever hid the orb chose a special location for the vault. The vault is located near the bottom of an active volcano, at the point where the lava flow meets the ocean. The location is significant because the four elements which are said to form the entirety of the plane are there. The lava represents fire, the boiling ocean represents water, the soil around and the bits of melting rock represent earth, and finally, the bulging winds represent air. Some of these elements are also the source of strength and power in many dragons.

Any would-be explorer would have to learn about the vault’s location first. This information is all but lost to history, but obscure references to its location can still be found at the grand library of Sigil, the City of Doors. There are also rumors that dragons older than a thousand years old may also know of its location. However, such a dragon may wish to acquire the orb for its own ends. The orb would be a terrible weapon in the hands of an evil dragon.

The entrance to the vault is in a volcanic rock wall next to the ocean and the lava river. The place defies existence in the ever-changing environment next to an active volcano. The main gate opens once the command phrase is spoken in draconic. The phrase is “I am here to challenge fate, for I am the head of the dragon”. Such a command phrase may be learned from a dragon who knows of the vault or it could be written in an old map along with the location of the vault. The elemental vault features four trials that represent each of the elements. After overcoming a trial, the adventurers find an oversized key. The four keys are needed to operate the locking device in the central hub to access the vault.

The hallway to the central hub is 50-feet-long. As adventurers walk along this path, a strange melody goes from almost imperceptible to moderate volume. The music appears tribal, with leather drums and crude wind instruments as its core. The music has no clear source; it is effectively only inside the visitor’s minds.

This octagonal chamber is brightly lit by two magical braziers which never stop burning. The room features six pairs of double doors. The westernmost doors are engraved with a great orb with draconic runes circling it. This door cannot be forced open or pick locked. A detect magic spell reveals an aura of strong abjuration magic. The only way to cross this doorway is to bring the four elemental keys to the pedestal in the middle of the room.

The rectangular stone pedestal is devoid of any markings or runes. It is however enchanted. Once a party member opens the entrance doors to this area, everyone in sight must roll a DC 17 Wisdom saving throw. On a fail, they are assaulted by an intense urge to leave the place as fast as possible and as far away as possible from the pedestal. The pedestal is under a permanent antipathy/sympathy spell.

A short hallway leads the way to another set of doors. A draconic rune on the door can be read as “stone”. The doors are locked.

The chamber is 50 by 25 feet. Three sets of doors on the south wall and four pillars by the corners. Large rocks are strewn about the stone-tiled floor. As soon as all party members are inside, the doors lock themselves and the rocks in the room start moving. 3 stone elementals rise up from nothingness and attack. The middle doors on the south wall lead to a small chamber where the elemental key of earth is. The side chambers do not have anything of value.

The hallway moves down in zigzag. The floor alternates between floor tiles and fiery lava pits. The first pit is the longest jump, it is 25-feet-long. The other two lava pits are 20-feet-long. The adventurers may come up with different ideas on how to cross these pits, creativity is encouraged. It is also encouraged that a real possibility of falling into the lava remains on the table. Falling to the lava may prove fatal, however. Touching the lava deals 18 (6d6) fire damage. Being submerged in the lava deals 60 (20d6) fire damage.

This natural cave features an underground pond. The water is 30-feet-deep in the first chamber. The narrow tunnel by the northeast is completely submerged. It allows no way of reaching the surface to breathe. Any explorer needs a way of breathing water through the use of a magical device or a magic spell. 6 swarms of quippers rise from the bottom and attack.

The water here is cold and dark. Water goes 200-feet-deep in this chamber. The stone pedestal with the elemental key of water lies at the bottom. 3 swarms of quippers and 2 hunter sharks protect the key and attack as soon as any visitor crosses the 100 ft. mark. There is a crack on the wall at the bottom, this passage leads out of the vault and into the ocean.

This natural cave features two chasms with no clear way of crossing. A faint breeze comes from the abyss below. No light reaches the bottom. If an adventurer throws a rock or similar object to judge the depth of the chasm, no sound is heard. The first chasm is 30-feet-long, the second one is 40-feet-long. The adventurers may come up with different ideas on how to cross these chasms, creativity is encouraged. If by chance a character falls into the abyss, he reaches the bottom thousands of feet below and is never heard from again.

The stone pedestal with the elemental key of air is here, but not alone. 4 dust mephits are automatically summoned next to the key if a creature manages to cross the first chasm. The four mephits are identical twins. They do their best to protect the key. Their main strategy is to use their sleep spells on visitors and them drop them off the chasm to their deaths.

The four elemental keys give anyone access to the main vault. There are three wooden chests, a vase, and a bookcase in the vault. The chests have old coinage of gold and silver. The vase is magical in nature. A successful DC 19 Intelligence (Arcana) check reveals that it is the Lost Vase of Adennea, a fabled object said to be able to contain any entity, like a prison. The lid is closed, there is no way to know if an entity is trapped inside or not.

The bookcase features many old tomes of incalculable value. One of them is the spell book of a legendary dragon of the old age. The orb of dragonkind is in the middle shelf of the bookcase, inside an ornate wooden box.

These are the general features of the elemental vault. It is located near the bottom of an active volcano where the lava flow meets the sea. The main gate is closed.

Terrain. The elemental vault features some stone-tiled sections, one natural cave section, and one submerged section. Most locations do not impose the difficult terrain feature unless specified.

Doors. All doors are double sets of stone doors. All are locked but can be opened with a successful DC 18 Dexterity (Thieves Tools) check. Alternatively, the doors to each of the elemental parts of the vault open if their respective elements are presented with magic. Like a fire spell for the fire section, or a stone manipulation spell for the earth section.

Light. Most areas within the elemental vault are in complete darkness. Area 2 has two magical braziers which never stop burning. Area 5 and Area 6 are brightly lit by the lava flows that run through the fire section.