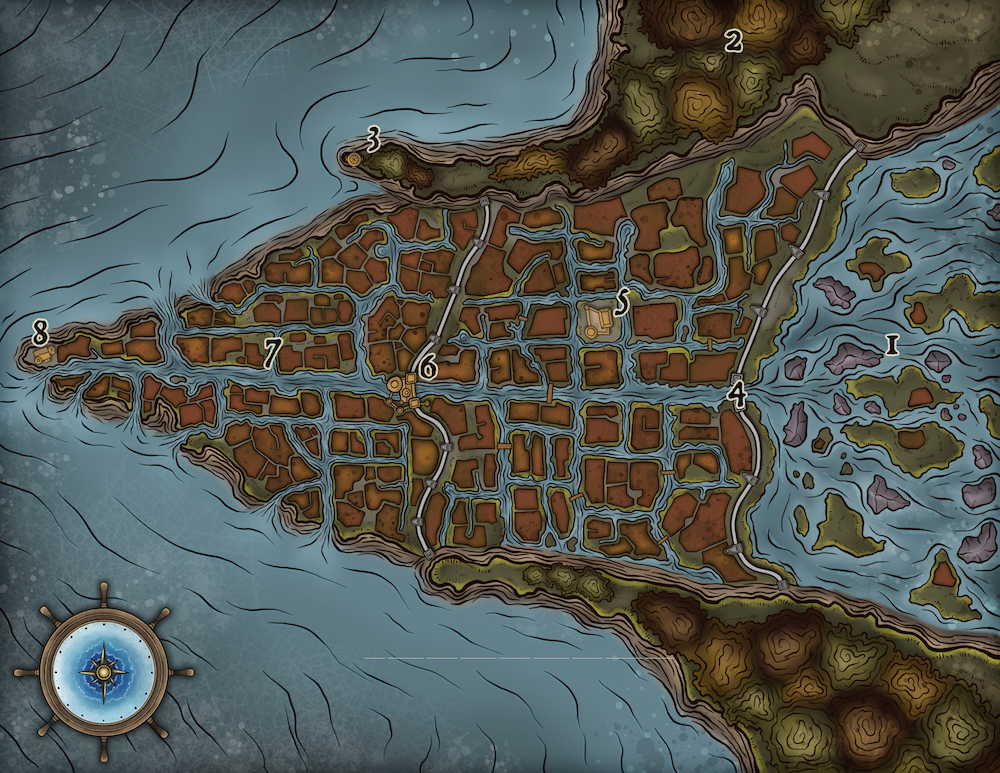 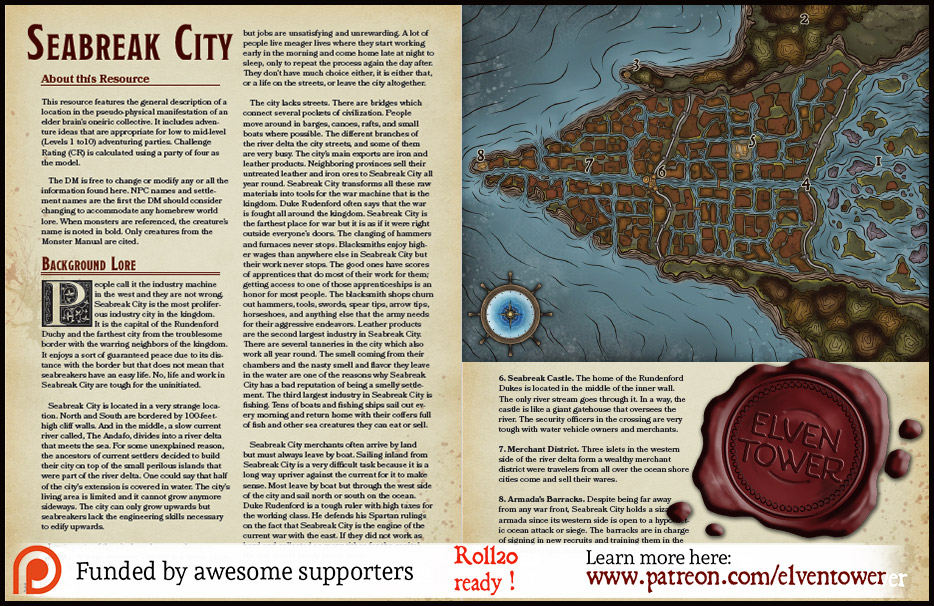 This resource features the general description of a location in the pseudo-physical manifestation of an elder brain’s oneiric collective. It includes adventure ideas that are appropriate for low to mid-level (Levels 1 to10) adventur­ing parties. Challenge Rating (CR) is calculated using a party of four as the model.

People call it the industry machine in the west and they are not wrong. Seabreak City is the most proliferous industry city in the kingdom. It is the capital of the Rundenford Duchy and the farthest city from the troublesome border with the warring neighbors of the kingdom. It enjoys a sort of guaranteed peace due to its distance with the border but that does not mean that seabreakers have an easy life. No, life and work in Seabreak City are tough for the uninitiated.

Seabreak City is located in a very strange location. North and South are bordered by 100-feet-high cliff walls. And in the middle, a slow current river called, The Andafo, divides into a river delta that meets the sea. For some unexplained reason, the ancestors of current settlers decided to build their city on top of the small perilous islands that were part of the river delta. One could say that half of the city’s extension is covered in water. The city’s living area is limited and it cannot grow anymore sideways. The city can only grow upwards but seabreakers lack the engineering skills necessary to edify upwards.

Large parts of the city have become slums or similar low wage territory. The city is a harsh place. There is always something to do or a job to fill, but jobs are unsatisfying and unrewarding. A lot of people live meager lives where they start working early in the morning and come home late at night to sleep, only to repeat the process again the day after. They don’t have much choice either, it is either that, or a life on the streets, or leave the city altogether.

The city lacks streets. There are bridges which connect several pockets of civilization. People move around in barges, canoes, rafts, and small boats where possible. The different branches of the river delta the city streets, and some of them are very busy. The city’s main exports are iron and leather products. Neighboring provinces sell their untreated leather and iron ores to Seabreak City all year round. Seabreak City transforms all these raw materials into tools for the war machine that is the kingdom. Duke Rudenford often says that the war is fought all around the kingdom. Seabreak City is the farthest place for war but it is as if it were right outside everyone’s doors. The clanging of hammers and furnaces never stops. Blacksmiths enjoy higher wages than anywhere else in Seabreak City but their work never stops. The good ones have scores of apprentices that do most of their work for them; getting access to one of those apprenticeships is an honor for most people. The blacksmith shops churn out hammers, tools, swords, spear tips, arrow tips, horseshoes, and anything else that the army needs for their aggressive endeavors. Leather products are the second largest industry in Seabreak City. There are several tanneries in the city which also work all year round. The smell coming from their chambers and the nasty smell and flavor they leave in the water are one of the reasons why Seabreak City has a bad reputation of being a smelly settlement. The third largest industry in Seabreak City is fishing. Tens of boats and fishing ships sail out every morning and return home with their coffers full of fish and other sea creatures they can eat or sell.

Seabreak City merchants often arrive by land but must always leave by boat. Sailing inland from Seabreak City is a very difficult task because it is a long way upriver against the current for it to make sense. Most leave by boat but through the west side of the city and sail north or south on the ocean. Duke Rudenford is a tough ruler with high taxes for the working class. He defends his Spartan rulings on the fact that Seabreak City is the engine of the current war with the east. If they did not work as hard and collected as many tithes for the capital, the war would surely reach them.

The Fraud of War

Duke Rudenford is a shameless prick who lies to his populace for personal gain. Only himself and a few other trusted advisors know the truth of the so-called “war” with the eastern neighbors of the kingdom. The war is a real thing, in fact. The struggle with the easterners started more than six years ago and has not ended completely. But saying that it is a war per se is misleading too. Both countries remain aggressive towards each other but none of them have invaded or directly attacked each other for the past three years. There is a skirmish from time to time or a lesser confrontation by the border. But both kingdoms have remained static in their aggression for years. There are even rumors of diplomats traveling back and forth between the two kingdoms to possible sign a peace treaty or at least an armistice.

The real possibility of an increase in the current state of affairs is something on the mind of most people on the east border of the kingdom, but it is not as if the kingdom is spending resources, weapons, and men on an ongoing conflict which does not appear to have an end. Duke Rudenford is abusing his power and overtaxing his citizens for personal gain. The weapons and other war tools they produce are, in part, sold to the capital. But there is such a surplus of production that the Duke has no other choice but to also sell to neighboring kingdoms. Duke Rudenford has kept the situation tight enough that the Golden Crown and the court have not noticed what has been going on in Seabreak City. The geographic location of Seabreak City and the unending demands of the Duke have prevented most people from traveling and spreading the word. Some people have done it, however, but their claims have fallen to deaf ears so far.

These are the general features of Seabreak City. It is located on an outcropping rock formation that pierces the ocean by the west shore. The city is next to a lake that meets the sea in a delta.

Terrain. Buildings and neighborhoods are built upon the land masses that form the river delta. No place or island is symmetrical as all have been shaped by the strong water currents and erosion. The streams double up as “streets” where canoes, rafts, and small boats take the place of carriages and horses.

Light. Lighting conditions are dependent on the time of day and weather.

Smells and Sounds. The salty smell of the ocean is ever present in Seabreak City. This is a highly industrious city that takes advantage of the waterways to dispose of thrash and other liquid refuse. In consequence, some of the smaller waterways are polluted and have a very bad smell.

Government. Seabreak City is the capital of the Rudenford Duchy, which pledges allegiance to the Golden Crown in the east. Duke Vieno Rudenford is the ruler in Seabreak City.

Main Exports. Fish and sea products, weapons, and all kind of iron and leather objects.