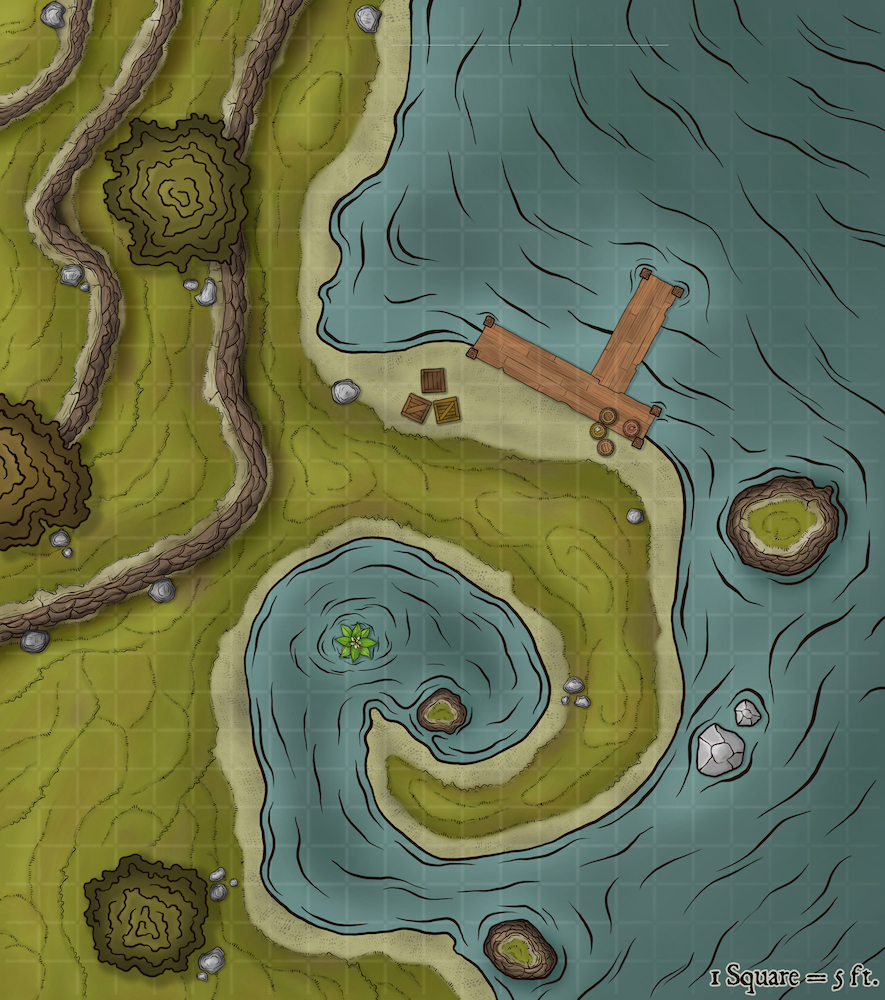 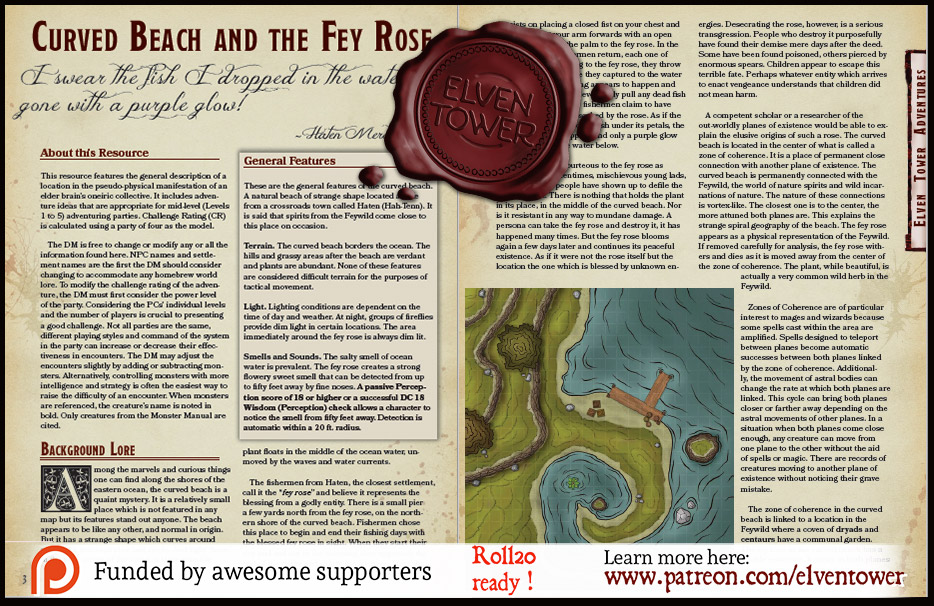 This resource features the general description of a location in the pseudo-physical manifestation of an elder brain’s oneiric collective. It includes adventure ideas that are appropriate for mid-level (Levels 1 to 5) adventur­ing parties. Challenge Rating (CR) is calculated using a party of four as the model.

Among the marvels and curious things one can find along the shores of the eastern ocean, the curved beach is a quaint mystery. It is a relatively small place which is not featured in any map but its features stand out anyone. The beach appears to be like any other, and normal in origin. But it has a strange shape which curves around creating a semi-spiral or half-circle. And right there, in the very center of the spiral, a large rose-like plant floats in the middle of the ocean water, unmoved by the waves and water currents.

The fishermen from Haten, the closest settlement, call it the “fey rose” and believe it represents the blessing from a godly entity. There is a small pier a few yards north from the fey rose, on the northern shore of the curved beach. Fishermen chose this place to begin and end their fishing days with the blessed fey rose in sight. When they start their day and sail out in the morning, they approach the end of the curve and salute the fey rose. The salute consists on placing a closed fist on your chest and then extending your arm forwards with an open palm, the inside of the palm to the fey rose. In the afternoon, when fishermen return, each one of them makes an offering to the fey rose, they throw one fish or sea creature they captured to the water around the rose. Nothing appears to happen and the soft water currents eventually pull any dead fish to the ocean. But some fishermen claim to have seen their offerings absorbed by the rose. As if the fey rose attracted the dead fish under its petals, the fish would then disappear and only a purple glow would remain in the water below.

Not everyone is courteous to the fey rose as fishermen are. Oftentimes, mischievous young lads, children, or evil people have shown up to defile the blessed plant. There is nothing that holds the plant in its place, in the middle of the curved beach. Nor is it resistant in any way to mundane damage. A persona can take the fey rose and destroy it, it has happened many times. But the fey rose blooms again a few days later and continues its peaceful existence. As if it were not the rose itself but the location the one which is blessed by unknown energies. Desecrating the rose, however, is a serious transgression. People who destroy it purposefully have found their demise mere days after the deed. Some have been found poisoned, others pierced by enormous spears. Children appear to escape this terrible fate. Perhaps whatever entity which arrives to enact vengeance understands that children did not mean harm.

A competent scholar or a researcher of the out-worldly planes of existence would be able to explain the elusive origins of such a rose. The curved beach is located in the center of what is called a zone of coherence. It is a place of permanent close connection with another plane of existence. The curved beach is permanently connected with the Feywild, the world of nature spirits and wild incarnations of nature. The nature of these connections is vortex-like. The closest one is to the center, the more attuned both planes are. This explains the strange spiral geography of the beach. The fey rose appears as a physical representation of the Feywild. If removed carefully for analysis, the fey rose withers and dies as it is moved away from the center of the zone of coherence. The plant, while beautiful, is actually a very common wild herb in the Feywild.

Zones of Coherence are of particular interest to mages and wizards because some spells cast within the area are amplified. Spells designed to teleport between planes become automatic successes between both planes linked by the zone of coherence. Additionally, the movement of astral bodies can change the rate at which both planes are linked. This cycle can bring both planes closer or farther away depending on the astral movements of other planes. In a situation when both planes come close enough, any creature can move from one plane to the other without the aid of spells or magic. There are records of creatures moving to another plane of existence without noticing their grave mistake.

The zone of coherence in the curved beach is linked to a location in the Feywild where a coven of dryads and centaurs have a communal garden. The fey rose in the curved beach has a double existence, it exists in both planes simultaneously. The dryad and centaurs can attune their minds and see into the material plane if they so wish. They like the fishermen which show enormous respect to the fey rose. When possible, in accordance with the astral cycle, they take the food the fishermen throw as a boon of gratitude. When the fey rose is vandalized by wrongdoers, the dryads consider it a terrible transgression to their garden. The dryads use their magic to send a centaur or a dryad to the material world to deal with the disrespectful person.

The PCs, inadvertently or on purpose, destroy the fey rose and a group of Feywild centaurs appear out of nowhere to enact vengeance. They come immediately after them in the curved beach because the planes are close enough for direct travel.

The adolescent son of a noble in Haten destroyed the fey rose yesterday for fun. The noble father knows his son’s fate is sealed and he may die soon. The noble hires the PCs to guard his son against any would-be assassin.

When the party visits the curved beach, a dryad of unspeakable beauty appears from the fey rose. She escaped her garden because a primal spirit from the Feywild is attacking her sisters and the valiant centaurs. She asks for help.

In the curved beach, a group of goblin bullies ambushes the returning fishermen to steal their fish when the PCs arrive. During the ensuing battle, a goblin or a PC shoots an arrow and misses, the arrow hits the fey rose. 1d4 rounds later, a trio of centaur warriors arrives from the ether to fight. They attack everyone except the fishermen, which they know well. Unless the PCs explain how they are not their enemies, they are attacked too.

These are the general features of the curved beach. A natural beach of strange shape located a mile from a crossroads town called Haten (Hah-Tenn). It is said that spirits from the Feywild come close to this place on occasion.

Terrain. The curved beach borders the ocean. The hills and grassy areas after the beach are verdant and plants are abundant. None of these features are considered difficult terrain for the purposes of tactical movement.

Light. Lighting conditions are dependent on the time of day and weather. At night, groups of fireflies provide dim light in certain locations. The area immediately around the fey rose is always dim lit.

Smells and Sounds. The salty smell of ocean water is prevalent. The fey rose creates a strong flowery sweet smell that can be detected from up to fifty feet away by fine noses. A passive Perception score of 18 or higher or a successful DC 18 Wisdom (Perception) check allows a character to notice the smell from fifty feet away. Detection is automatic within a 20 ft. radius.