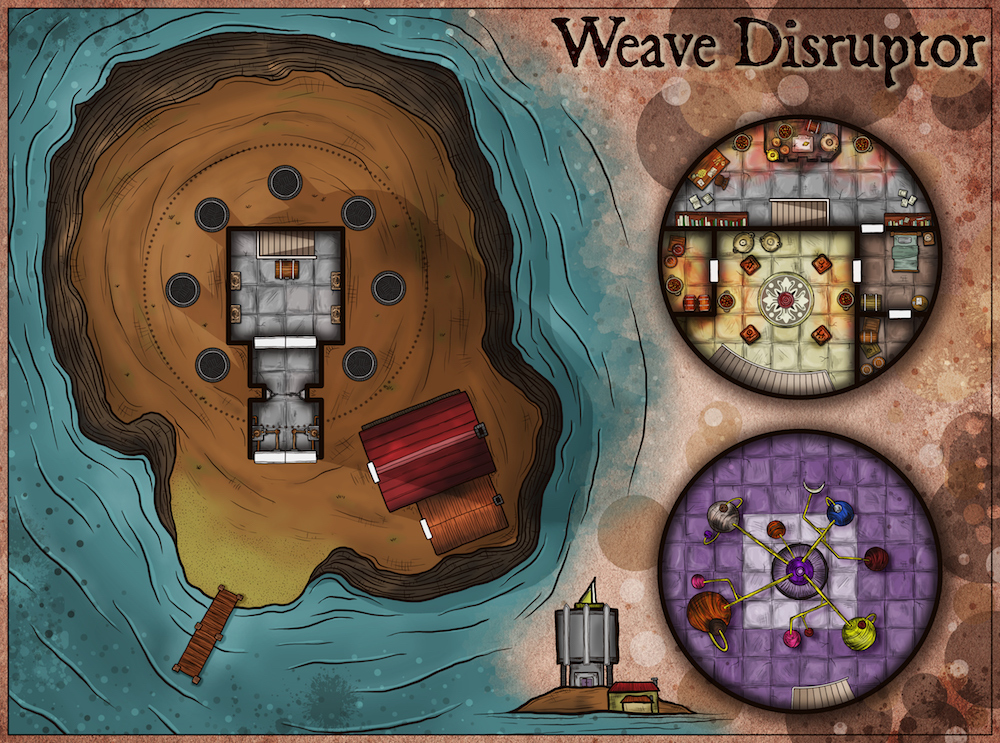 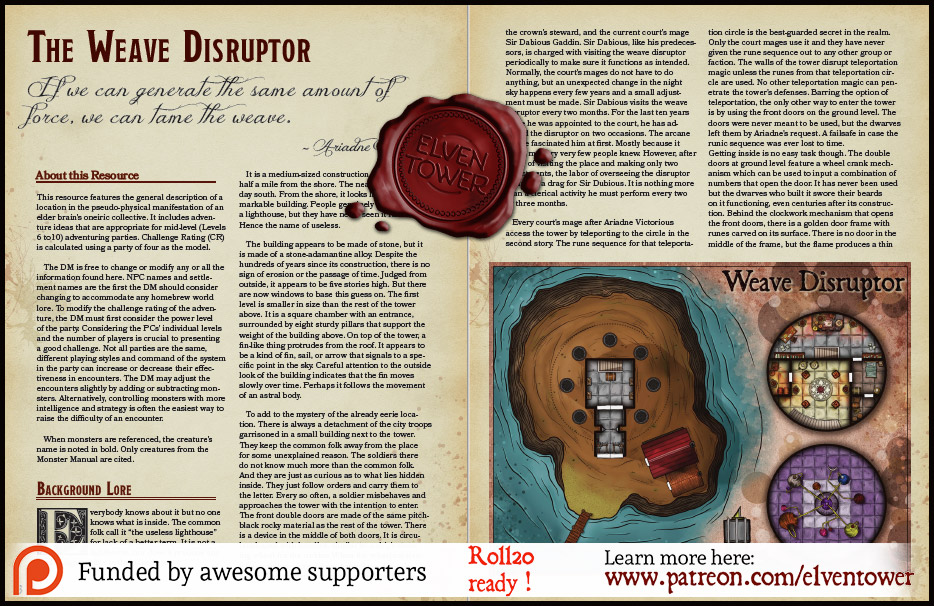 Everybody knows about it but no one knows what is inside. The common folk call it “the useless lighthouse” for lack of a better term. It is not a lighthouse, nor does it produce any kind of light visible to the naked eye.

It is a medium-sized construction in a small island half a mile from the shore. The nearest city is one day south. From the shore, it looks like an unremarkable building. People genuinely believe it is a lighthouse, but they have never seen it function. Hence the name of useless.

The building appears to be made of stone, but it is made of a stone-adamantine alloy. Despite the hundreds of years since its construction, there is no sign of erosion or the passage of time. Judged from outside, it appears to be five stories high. But there are now windows to base this guess on. The first level is smaller in size than the rest of the tower above. It is a square chamber with an entrance, surrounded by eight sturdy pillars that support the weight of the building above. On top of the tower, a fin-like thing protrudes from the roof. It appears to be a kind of fin, sail, or arrow that signals to a specific point in the sky. Careful attention to the outside look of the building indicates that the fin moves slowly over time. Perhaps it follows the movement of an astral body.

To add to the mystery of the already eerie location. There is always a detachment of the city troops garrisoned in a small building next to the tower. They keep the common folk away from the place for some unexplained reason. The soldiers there do not know much more than the common folk. And they are just as curious as to what lies hidden inside. They just follow orders and carry them to the letter. Every so often, a soldier misbehaves and approaches the tower with the intention to enter. The front double doors are made of the same pitch-black rocky material as the rest of the tower. There is a device in the middle of both doors. It is circular-shaped with handles, similar to a ship’s steering wheel for the rudder. When the wheel rotates, a faint clicking sound from behind the doors is heard. The soldiers theorize that is must be a type of combination lock, similar to those in safe boxes. No one has ever opened the front door, as far as the soldiers garrisoned there know.

The history of the tower dates back almost 600 years. Back then, the city to the south was barely a village, but it was growing fast. There was a large problem in the area, though. For some unexplained reason, the weave was unstable to the point of being dangerous. The weave is an impervious layer of reality that gives and takes energy from all things. It is always around us. Arcane scholars and mages have the ability to manipulate the behavior of the weave during a short period of time. This is how they create what is commonly known as magic and spells. The weave is calm and docile in its normal state, like a curtain gently moving with the wind. It shudders and violently vibrates when a mage manipulates it to cast a spell. The area around the city vibrated more than expected for such a large outdoor area. These unwanted vibrations manifested themselves as random and unpredictable spell-like effects. Things moved on their own, random objects burst into flames, the sea tides became unruly and impossible to predict. Among other unwanted effects that made the area rather unlivable.

A brilliant spellcaster came up with an idea that would change the lives of thousands of people in the area. Her name was Ariadne Victorious, She was the court’s mage and many considered her to be the grandest mage of her time. She was one of the scholars who determined the cause of all the strange happenings in the province. With cautious research, Ariadne and her colleagues determined the origin of the disruption, though they still ignored its cause. She designed an arcane device whose only function was to create a disruption in the weave of the same magnitude but opposite energy to the one already there. Her intention was to dissipate both waves by crashing them against each other.

There were some risks involved by doing this, she explained the crown. Since there was no way to determine whether the original disruption would ever go away, her device had to be set up to stay functioning for an indefinite amount of time. Possibly centuries. And second, If a person turned off her device, by accident or evil intent, the weave would vibrate violently for days and then revert to its former state of instability until her device was returned to normal. This period had the potential to be violent enough to destroy nearby villages and cities. Because of this, her device had to be protected and guarded against outside forces. The crown hired a group of dwarven miners to bring their best materials to build the strongest stronghold gold could buy. The tower was erected and Ariadne Victorious installed her weave disruptor inside. For an untrained observer, the device appeared to be a planetarium of sorts. The center of the room features a wide post/pillar from floor to roof. An array of beams and supports emerge from its middle section. There are models of what appear to be planets or miniature worlds at the end of each beam. Some of them are moons or even stars. The models mode at a very slow pace, rotating around the room as the follow the movement of astral bodies in the night sky. As they move, a complex set of gears inside the pillar moves a set of eight diamonds buried inside the pillar. These magical diamonds produce the manipulating force on the weave that negates the disruption in the area. The correct functioning of the diamonds depends directly on the correct orientation of all the bodies in the planetarium.

The only people in the realm that know about the real purpose of the tower are the king, the queen, the crown’s steward, and the current court’s mage Sir Dabious Gaddin. Sir Dabious, like his predecessors, is charged with visiting the weave disruptor periodically to make sure it functions as intended. Normally, the court’s mages do not have to do anything, but an unexpected change in the night sky happens every few years and a small adjustment must be made. Sir Dabious visits the weave disruptor every two months. For the last ten years since he was appointed to the court, he has adjusted the disruptor on two occasions. The arcane device fascinated him at first. Mostly because it was a mystery very few people knew. However, after years of visiting the place and making only two adjustments, the labor of overseeing the disruptor is almost a drag for Sir Dubious. It is nothing more than a clerical activity he must perform every two or three months.

Every court’s mage after Ariadne Victorious access the tower by teleporting to the circle in the second story. The rune sequence for that teleportation circle is the best-guarded secret in the realm. Only the court mages use it and they have never given the rune sequence out to any other group or faction. The walls of the tower disrupt teleportation magic unless the runes from that teleportation circle are used. No other teleportation magic can penetrate the tower’s defenses. Barring the option of teleportation, the only other way to enter the tower is by using the front doors on the ground level. The doors were never meant to be used, but the dwarves left them by Ariadne’s request. A failsafe in case the runic sequence was ever lost to time.

Getting inside is no easy task though. The double doors at ground level feature a wheel crank mechanism which can be used to input a combination of numbers that open the door. It has never been used but the dwarves who built it swore their beards on it functioning, even centuries after its construction. Behind the clockwork mechanism that opens the front doors, there is a golden door frame with runes carved on its surface. There is no door in the middle of the frame, but the flame produces a thin curtain of fiery fire. Like the door, it has never been used, and the court’s mages seldom descend to the ground level to see if things are going according to the plan. The dwarves insisted that the fires from that frame would incinerate anything that passed through it. It could be that, perhaps, the magic in the door frame has faded over the centuries. Last but not least, the dwarves set a decoy trap. There is a large wooden chest at the end of the chamber in the first level. There is nothing inside the chest, but opening the lid triggers a trap of explosive runes on the chamber’s floor. There are so many explosive runes on the floor tiles that nothing is expected to survive. Despite the explosion’s strength, the trap does not pose any threat to the integrity of the tower of the areas in the second or third story.

These are the general features of the tower that shelters the weave disruptor. It is located in a small island half a mile from the shore.

Terrain. The floors inside the tower are stone tiles. The walls are made of an adamantine alloy that resists most physical and magical attacks. There are no windows in any chamber within the tower.

Doors. The front door is made of the same adamantine alloy of the walls. It also features a complicated lock mechanism which can only be opened with the correct combination. The rest of the tower features normal wooden doors with simple locks.

Light. Some rooms are permanently illuminated with magical braziers which have permanent magical fires. The weave disruptor planetarium glows and illuminates that chamber too.

Smells and Sounds. There is no smell other than a rusty hue from the adamantine alloy. The weave disruptor generates a low-pitched hum at all times. It can be heard in any chamber within the chamber. The vibration cannot be perceived outside of the tower.