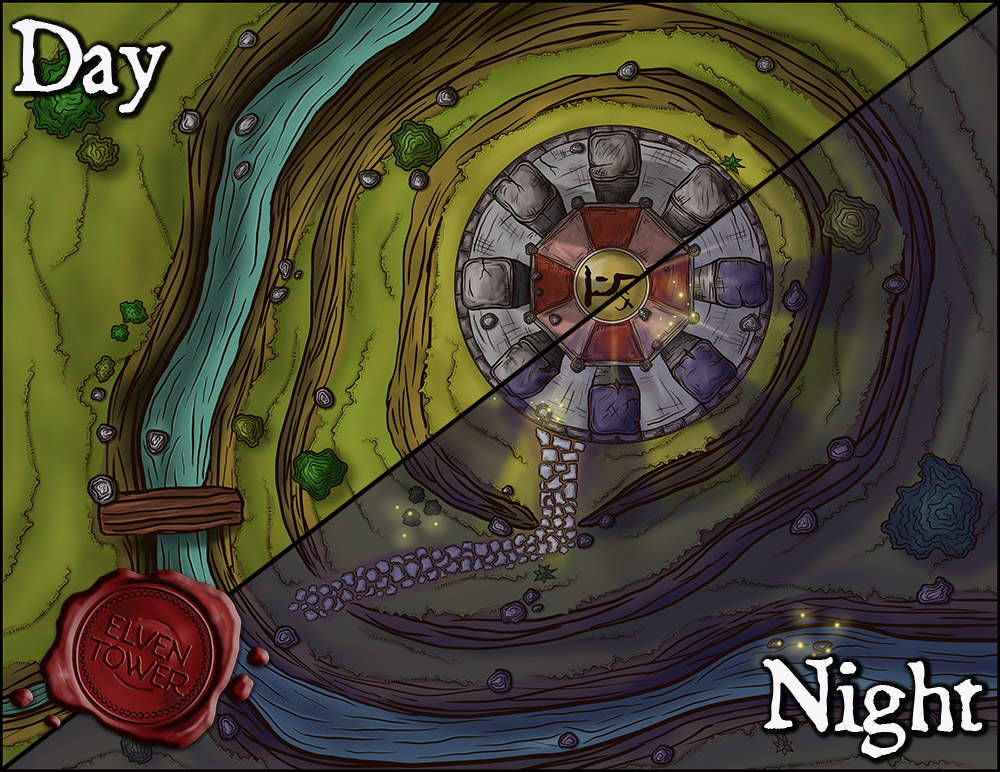 OUR MAP INDEX AND OUR PATREON FUNDING PAGE

This resource features the general description of an outdoors stone observatory on a hill’s summit. It includes adventure ideas that are appropriate for low-level (Levels 12 to 5) adventur­ing parties. Challenge Rating (CR) is calculated using a party of four as the model.

When monsters are referenced, the creature’s name is noted in bold. Only creatures from the Monster Manual are cited

It was thousands of years ago that a circle of druids known as the Weavers of the Wild built the observatory in the eastern lands. The Weavers of the Wild cared for the land and protected the natural balance of the world. Their leader was a half-orc named Fanneran. Together with the other seven druids and the help of wild beasts, the Weavers of the Wild erected a monument on top of a hill. The monument consisted of a circular stone slab almost as big as the hill’s summit. There were eight thirty-feet tall rectangular stones arranged in a circular shape. These large stones were not placed randomly on the monument. They aligned with the locations of eight stars in the sky. The center of the observatory was a circular slab of yellow stone with a druidic rune painted on it. This stone was magical in nature. It was connected with the Feywild, the stars, and the Weave of magic in subtle ways. Only the circle druids possessed the necessary knowledge to understand the full function of the observatory. It required decades of study of the skies, knowledge of nature, and the arcane capacity to manipulate the magic of nature.

The yellow stone in the center of the monument was a sunstone. A very rare object which absorbs sunlight during the day, and releases it as discreet rays during the night.

Each druid would sit on top of the eight large stones to meditate and commune with nature and each other. Their meditation sessions would last days and even weeks. During these meetings, their souls and consciousness became disembodied spirit-like orbs of energy that flew around the observatory. They could see themselves sitting on the stones while flying around without a physical representation of their ego. They could fly away and enter the bodies of plants and animals. Upon doing that, they could feel the physical and mental experiences of all beings in the wild. They could also enter the sunstone in the middle of the observatory. Doing that sent them flying upwards into the cosmos. They could experience the night sky as if they were part of it. They became one with the cosmos and the stars.

The Weavers of the Wild disappeared eventually as time passed and their activities lost importance or their order disbanded. There are still a few survivors of their kin, but they lack the understanding of their ancestors, and they ignore the existence of the observatory.

The observatory rose to importance recently when it became active after hundreds of years. The observatory sheds brighter rays of light during the night and unleashes waves of magic that attract wild animals to it. No one knows the exact reason why the observatory is doing this on its own, but the result is a higher than the usual number of wild creatures in the area around the observatory. It is a problem because there is an increased number of predatory animals in the area. Nearby towns have reported having problems with large bears, owlbears, bullets, and even wyverns. These creatures attack livestock and other farm animals because their hunting grounds now include towns and hamlets. The reports mention the fact that a few farmers and hunters have lost their lives in incidents related to the high number of creatures in the area.

Why is This Happening?

The Weavers of the Wild used their druidic magic to weave instructions into the fabric of nature. The druids have a calendar system that portrays reality in cycles. Each cycle lasts eight hundred years. These cycles, calculations, and interpretations are not hard science, even for the druids. It’s a study of patterns, but they are subject to change. If the Weavers of the Wild were still around, they would have changed the behavior of the observatory to avoid any unnecessary complication.

What happened is that their calendar predicted a cycle of drought and death. They predicted this a long time ago, and their prediction is flawed. There is no draught. To fight the situation, the druids weaved a magic instruction into the observatory. When the cycle ended, it would summon wildlife to replace the ones that would have died if the prediction had been correct. The observatory’s magic also influenced plant life, accelerating their growth speed and size. This change has passed unnoted because the animal problem is more notorious.

If a group of characters is sent to the area to find a way to stop the influence of the observatory on the wildlife. Predatory beasts attack them upon approaching the hill. The animals are not evil nor are they in real control of their own actions. The magic of the observatory makes them behave as if this were their territory. An arcane spellcaster can use their magic to stop the observatory from exerting more influence in the area. A successful DC 16 Intelligence (Arcana) and the expense of 1 spell slot allows a character to weave a “stop” instruction into the observatory. After this happens, all animals not natural to the area become drowsy and sleepy. After a few hours, they wake up and return to their natural habitats.

These are the general features of druid observatory. It is located in on top of a hill in a temperate climate area.

Terrain. The area is not considered difficult terrain. The hill has two levels above ground-level. The stream is also un another level below ground level. The levels are separated by a 20 ft. gap on average. A successful DC 15 Strength (Athletics) check allows a character to climb up or down a level as an action. There is no need to roll if the character uses the rocky path to the summit.

Light. During the day, the hill and the stone cairns the only objects which provide any sizeable shadow. Depending on the time of the day, they cast their shadows accordingly. At night, there are fireflies which provide dim light in some areas. The observatory’s central stone sheds light at night. A successful DC 14 Intelligence (Arcana) check reveals that it accumulates sunlight during the day and releases it at night.

Smells and Sounds. The stream and greenery in the area provide a fresh grassy smell. The sound of the stream never stops. 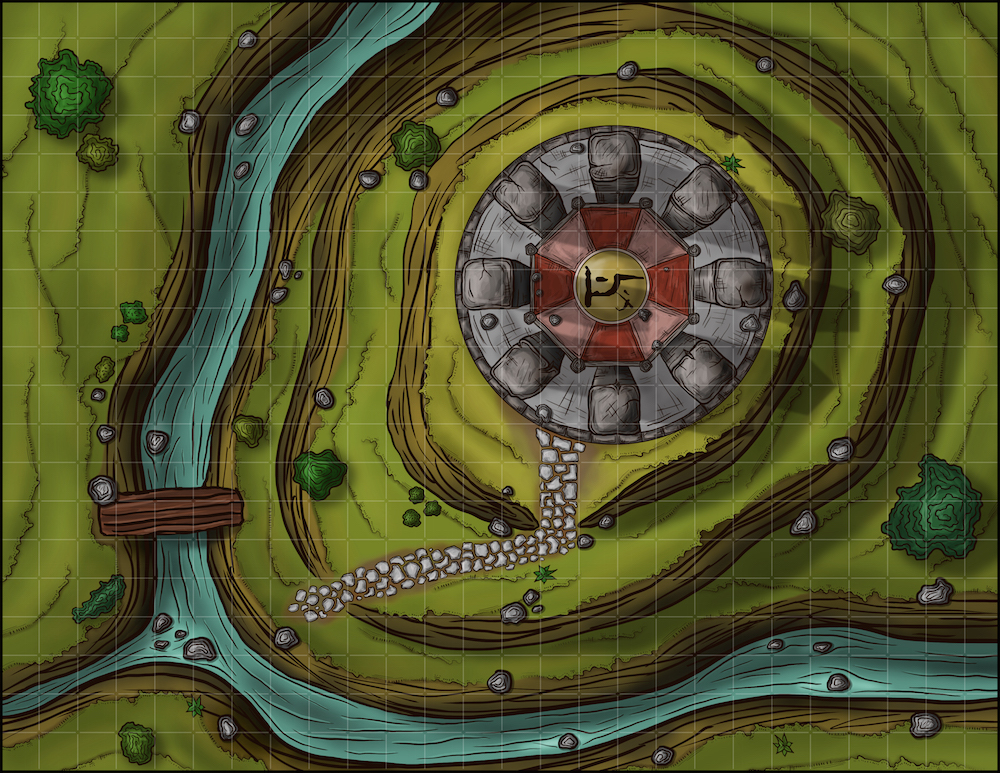