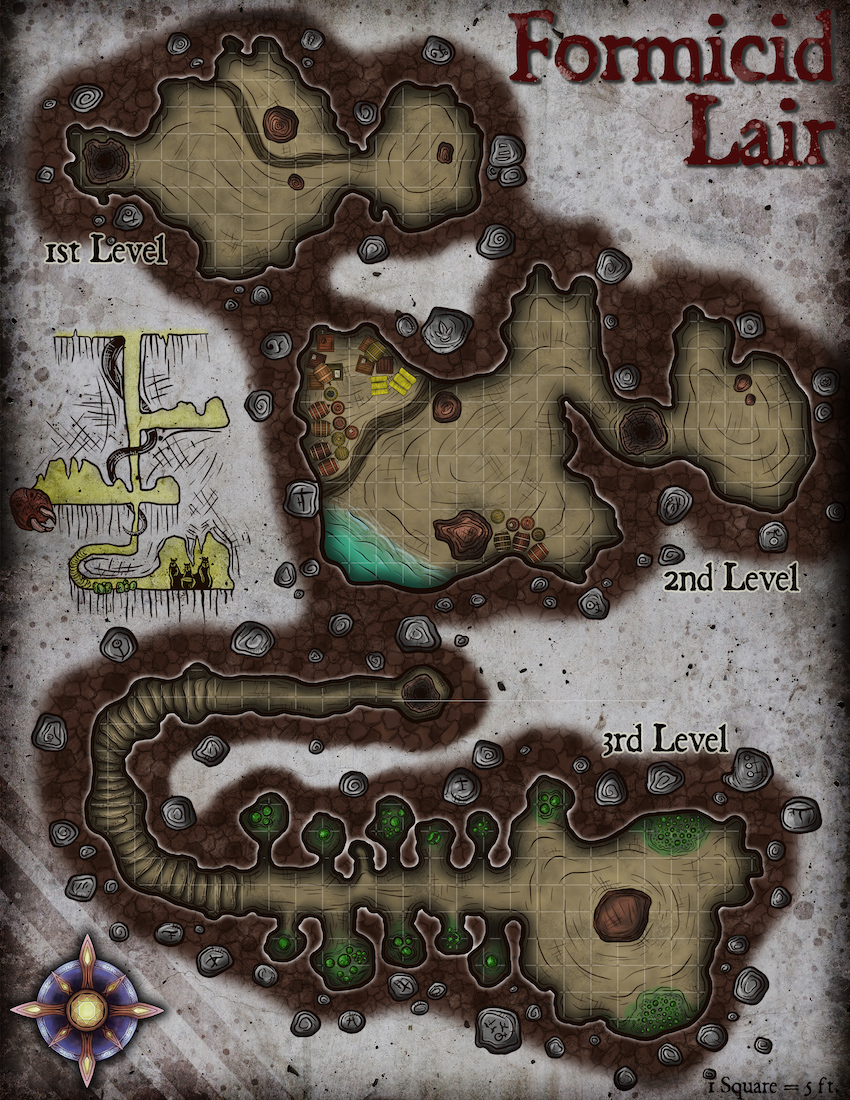 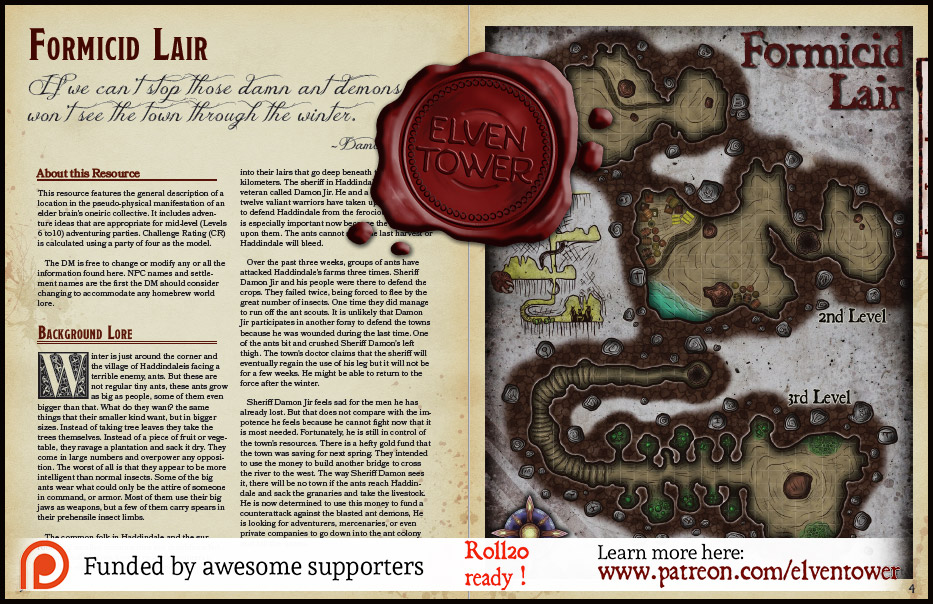 Winter is just around the corner and the village of Haddindale is facing a terrible enemy, ants. But these are not regular tiny ants, these ants grow as big as people, some of them even bigger than that. What do they want? the same things that their smaller kind want, but in bigger sizes. Instead of taking tree leaves they take the trees themselves. Instead of a piece of fruit or vegetable, they ravage a plantation and sack it dry. They come in large numbers and overpower any opposition. The worst of all is that they appear to be more intelligent than normal insects. Some of the big ants wear what could only be the attire of someone in command, or armor. Most of them use their big jaws as weapons, but a few of them carry spears in their prehensile insect limbs.

The common folk in Haddindale and the surrounding smaller communities are dumbfounded. No one really knows how to react or counterattack. The enemy always escapes underground, into their lairs that go deep beneath the earth for kilometers. The sheriff in Haddindale is an old war veteran called Damon Jir. He and a group of other twelve valiant warriors have taken upon themselves to defend Haddindale from the ferocious ants. It is especially important now because the winter is upon them. The ants cannot steal the last harvest or Haddindale will bleed.

Over the past three weeks, groups of ants have attacked Haddindale’s farms three times. Sheriff Damon Jir and his people were there to defend the crops. They failed twice, being forced to flee by the great number of insects. One time they did manage to run off the ant scouts. It is unlikely that Damon Jir participates in another foray to defend the towns because he was wounded during the last time. One of the ants bit and crushed Sheriff Damon’s left thigh. The town’s doctor claims that the sheriff will eventually regain the use of his leg but it will not be for a few weeks. He might be able to return to the force after the winter.

Sheriff Damon Jir feels sad for the men he has already lost. But that does not compare with the impotence he feels because he cannot fight now that it is most needed. Fortunately, he is still in control of the town’s resources. There is a hefty gold fund that the town was saving for next spring. They intended to use the money to build another bridge to cross the river to the west. The way Sheriff Damon sees it, there will be no town if the ants reach Haddindale and sack the granaries and take the livestock. He is now determined to use this money to fund a counterattack against the blasted ant demons, He is looking for adventurers, mercenaries, or even private companies to go down into the ant colony and kill the queen.

As suspected by many who faced the ants in battle. The ants are not stupid, nor are they behaving out of instinct or nature. They are formicids, an intelligent ant race from the Underdark. The formicids form large colonies whose lairs can span for kilometers in every direction. While they usually keep to the Underdark, there are quite a few instances of formicids doing excursions on the surface recorded in written history. The recorded examples of such behavior show that the ants pick a relatively small area and sack it day after day until there is nothing more to take. After that, they return to the Underdark and close their tunnels behind them. Scholars argue that the formicids are opportunistic in nature. Thus, when they approach the surface during their regular activities, a group might decide to go up and sack the area. They only do this in areas which are not heavily settled so as to not find any sizable opposition.

Formicids have no form of spoken language. They communicate through a complex cocktail of airborne pheromones that their antennae pick up. Their chemical language is as deep and complicated as spoken speech in the common tongue.

Their culture is divided into castes. Worker formicids stand at the bottom of the chain, they are the most numerous. They do most of the colony’s activities and are responsible for the wellbeing of the colony, the queen, and the larvae. Next are the soldier formicids. They are twice as large as workers. Their jaws are larger and stronger, and their chitin carapaces are more resilient. Additionally, they can produce a pheromone that forces their will upon worker formicids. No worker can resist or deny a direct command from a soldier formicid.

Next in the hierarchy are the colony shamans. These rare formicids can channel their mental energy to manipulate the weave of magic. Some scholars consider their magical abilities similar to those of a druid. Though the colony shamans stand above soldier formicids in the hierarchy, their pheromones cannot force them to act or accept orders as they can do with the workers. Any communication and commands among these two castes is at least voluntary.

The formicid queen is at the top of the pyramid. There are two kinds of queens. The colony queen or the lone queen. Colony queens are as big as an elephant. They are huge bloated creatures who cannot move. Their sole purpose is to lead the colony and hatch eggs. Their pheromones can override any other formicid’s in the colony. They also have strong psychic powers. On the other hand, lone queens are the same size as soldier formicids. Their sole purpose is to rebel against the colony and part away with a group of rebel formicids to create a new colony far away from the colony that raised them.

A large colony of thousands of formicids usually has one colony queen and two or three lone queens awaiting to leave. A lone queen who already left the main colony usually has fifty to one-hundred followers before they decide to settle and become a colony queen.

The formicids that attack Haddindale are actually a relatively small group of workers and soldiers that follow a lone queen looking for the perfect spot to start her own colony. She is ruthless and merciless. Her name cannot be written or spoken as it is only a combination of chemical substances. She does not intend to stay in the area surrounding Haddindale for a long time, but they will sack the town if no one stops them. Ultimately, when winter comes, the lone queen and her formicids will return to the depths of the Underdark.

These are the general features of the formicid lair close to Haddindale. The passages that connect it to the Underdark were closed off by the formicid workers.

Terrain. The tunnels and floor are rough and crudely dug. Loose rocks litter most of the floor. They may be considered difficult terrain at the DMs discretion.

Light. Most of the tunnels and chambers are in complete darkness. The eggs in the bottom level shed faint green light. The areas next to the eggs are considered dimly lit.

Smells and Sounds. The smell of formicid pheromones and chemical communication are alien to humanoid senses. They are translated as a mix of metallic and fruity smell. No sound is perceivable in these tunnels.