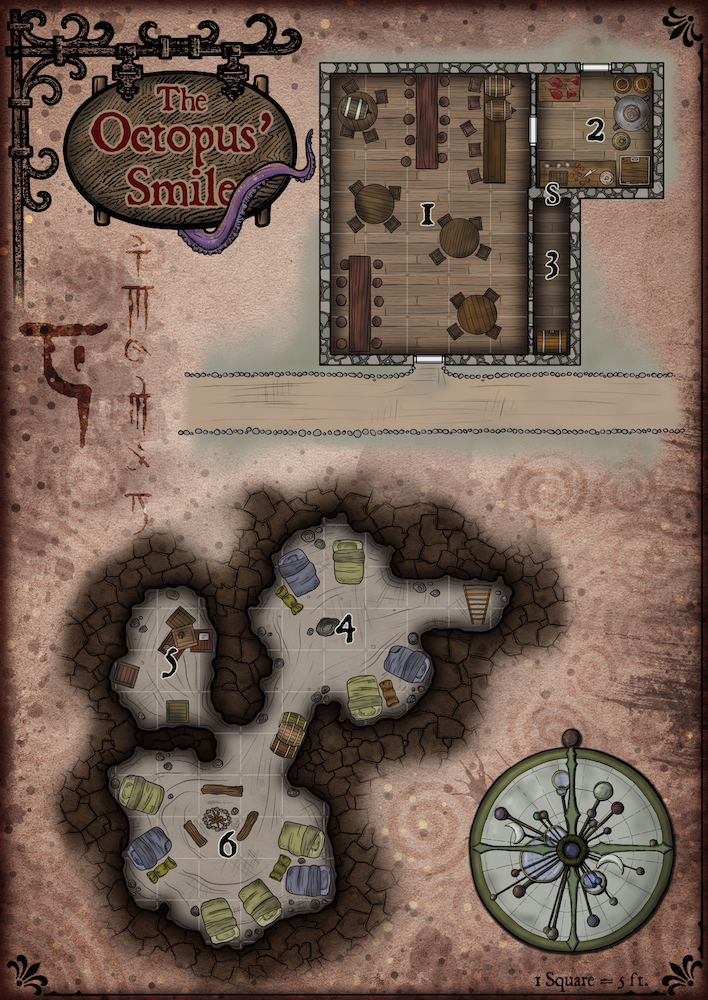 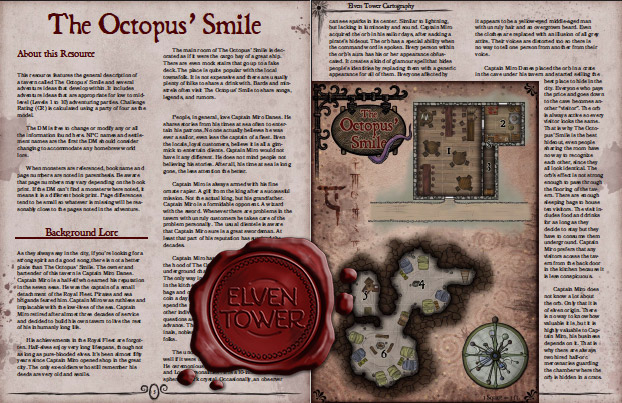 This resource features the general description of a tavern called The Octopus’ Smile and several adventure ideas that develop within. It includes adventure ideas that are appropriate for low to mid-level (Levels 1 to 10) adventuring parties. Challenge Rating (CR) is calculated using a party of four as the model.

As they always say in the city, if you’re looking for a strong spirit and a good song, there is not a better place than The Octopus’ Smile. The owner and bartender of this tavern is Captain Miro Danes. Captain Miro is a half-elf who earned his reputation in the seven seas. He was the captain of a small detachment of the Royal Fleet. Pirates and sea brigands feared him. Captain Miro was ruthless and implacable with the low-lives of the sea. Captain Miro retired after almost three decades of service and decided to build his own tavern to live the rest of his inhumanly long life.

His achievements in the Royal Fleet are forgotten. Half-elves enjoy very long lifespans, though not as long as pure-blooded elves. It’s been almost fifty years since Captain Miro opened shop in the great city. The only ex-soldiers who still remember his deeds are very old and senile.

The main room of The Octopus’ Smile is decorated as if it were the cargo bay of a great ship. There are even mock stairs that go up to a fake deck. The place is quite popular with the local townsfolk. It is not expensive and there are usually plenty of folks to share a drink with. Bards and minstrels often visit The Octopus’ Smile to share songs, legends, and rumors.

People, in general, love Captain Miro Danes. He shares stories from his times at sea often to entertain his patrons. No one actually believes he was ever a sailor, even less the captain of a fleet. Even the locals, loyal customers, believe it is all a gimmick to entertain clients. Captain Miro would not have it any different. He does not mind people not believing his stories. After all, his time at sea is long gone, the less attention the better.

Captain Miro is always armed with his fine ornate rapier. A gift from the king after a successful mission. Not the actual king, but his grandfather. Captain Miro is a formidable opponent. A wizard with the sword. Whenever there are problems in the tavern with unruly customers he takes care of the problem personally. The usual clientele is aware that Captain Miro sure is a great swordsman. At least that part of his reputation has survived the decades.

Captain Miro has a side hustle running under the hood of The Octopus’ Smile. There are three underground chambers under The Octopus’ Smile. The only way in or out of them is through a trapdoor in the kitchen. The caves are fitted with sleeping bags and crude living accommodations. For a gold coin a day, Captain Miro will let any individual spend the night (or day) inside the cave, along with other individuals who paid the price. There are no questions asked, only the payment is required in advance. The place works as a hiding spot for criminals, nobles, pirates, and other similarly minded folks.

The underground hideout would not work so well if it were not for Captain Miro’s secret device. He ceremoniously calls it “The Orb of Secrets and Lost Personalities”. It is a10-inch in diameter sphere of dark crystal. Occasionally, an observer can see sparks in its center. Similar to lightning, but lacking in luminosity and sound. Captain Miro acquired the orb in his sailor days, after sacking a pirate’s hideout. The orb has a special ability when the command word is spoken. Every person within the orb’s aura has his or her appearance obfuscated. It creates a kind of glamour spell that hides people’s identities by replacing them with a generic appearance for all of them. Everyone affected by it appears to be a yellow-eyed middle-aged man with unruly hair and an overgrown beard. Even the clothes are replaced with an illusion of all grey attire. Their voices are distorted too so there is no way to tell one person from another from their voice.

Captain Miro Danes placed the orb in a crate in the cave under his tavern and started selling the best place to hide in the city. Everyone who pays the price and goes down to the cave becomes another “visitor”. The orb is always active so every visitor looks the same. That is why The Octopus’ Smile is the best hideout, even people sharing the room have no way to recognize each other, since they all look identical. The orb’s effect is not strong enough to pass through the flooring of the tavern. There are enough sleeping bags to house ten visitors. The visit includes food and drinks for as long as they decide to stay but they have to consume them underground. Captain Miro prefers that any visitors access the tavern from the back door in the kitchen because it is less conspicuous.

Captain Miro does not know a lot about the orb. Only that it is of elven origin. There is no way to know how valuable it is, but it is highly valuable to Captain Miro, his business depends on it. That is why there are always two hired half-orc mercenaries guarding the chamber where the orb is hidden in a crate. The guards are affected by the orb’s magic and thus appear to be other visitors, but it is clear that they guard the room and will not let anyone else except Captain Miro access the room. Since Miro is also subject to the illusion magic, they have a password to know it is Miro.

The Octopus’ Smile is a one-story stone building with an entrance to the main street and a back door to access the kitchen. The façade features a wooden sign hanging from a metal post. The sign reads “The Octopus’ Smile” in red letters. There is also a mock tentacle sliding from beneath the sign.

These are the general features of The Octopus’ Smile and the cave area below.

Terrain. The tavern has a wooden floor. It is usually greasy and dusty. The floor in the caves below the tavern is rough unworked stone and dirt.

Light. The tavern is illuminated with torches on sconces every meter on the walls. The caves below are illuminated by the campfire in Area 6. Area 4 and 5 are dimly illuminated.

Smells and Sounds. The smells in the tavern’s common room are food, beer, ale, and greasy wood. There always chatter and people drinking and chanting. Underground the air is musky and dry. There’s also the muffled echoes of visitors talking in their distorted voices.

The common room of the tavern is seldom empty. There are many tables and benches to sit. Captain Miro is usually at the bar, next to the door to the Kitchen. For larger groups, it is possible to order a whole barrel of ale to be placed on the table. When the place is full, there is usually a minstrel or two singing and playing string instruments for the patrons.

There are usually two women and a young man working in the kitchen. They are very well paid for their silence about the underground chambers. There is a trap door in the south-east corner of the kitchen that serves as the only entry to the Area 4. There is a secret door behind a counter in the south-west corner of the kitchen. It can only be opened with a key that Captain Miro has on a keychain on his neck. It leads to Area 3.

Captain Miro uses this narrow room to store a chest full of gold and other valuables. There are also four peepholes on the west wall to spy on patrons sitting next to the wall. It is also possible to shoot blowgun darts through them. There is a blowgun and five sleeping poison darts in the chest.

This is the first chamber in the underground cave complex. It features a ladder that goes up to the trap door in Area 2. This is the only way out of the caves. There are four sleeping bags in this room. The chamber is in dim-light coming from Area 6. This room is affected by the magic orb’s magic. Any person here changes his appearance, clothing, and voice as described above.

This smaller chamber is used to store a few crates with supplies for the kitchen. There are two strong half-orc mercenaries guarding this room at any time. Their race, of course, is not apparent because of the orb’s magic. They only let Captain Miro in after he says the passphrase which is “A flap of the butterfly’s wings is all I crave”. Only them and Captain Miro know this. The chamber is in dim-light coming from Area 6.

This chamber is the biggest one. There is a permanent campfire with crude benches in the center of the room. The fumes and smoke from it reach the surface through a pipe in the ceiling. It is not fast, or very effective, thus the air is smokier than it should. There are sleeping bags for six people. The chamber is normally well illuminated. The southern wall has a few streaks of silvery rock that shine with the campfire’s light. A knowledgeable observer might determine that the silvery formations reveal the presence of a silver vein. Captain Miro is unaware of this minable silver.