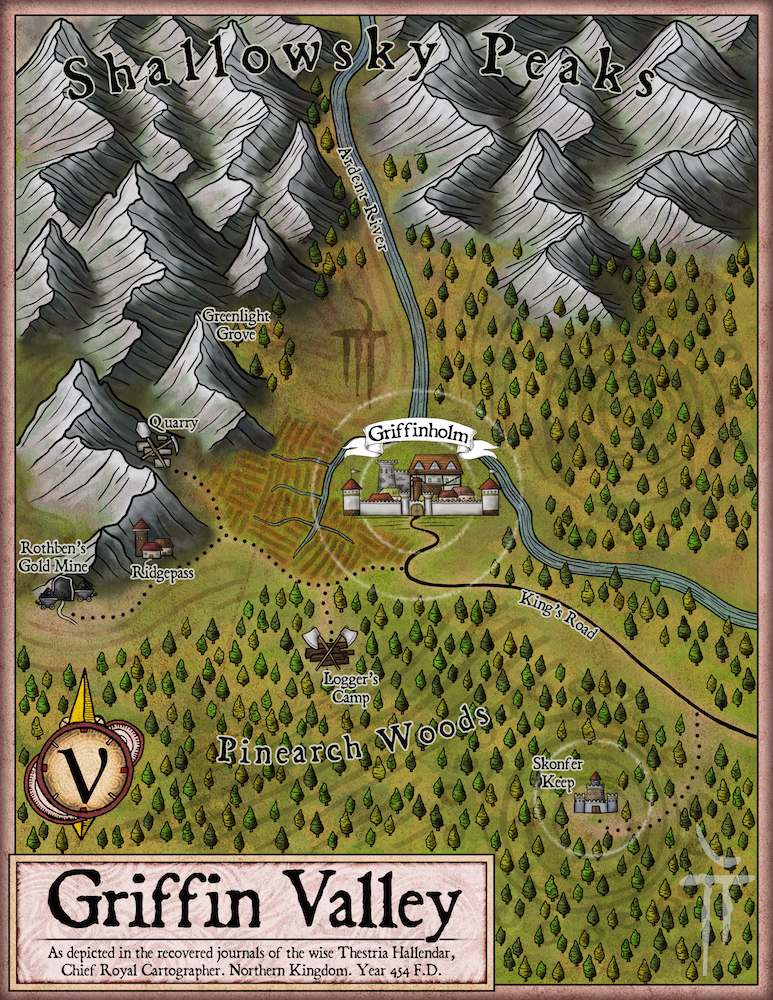 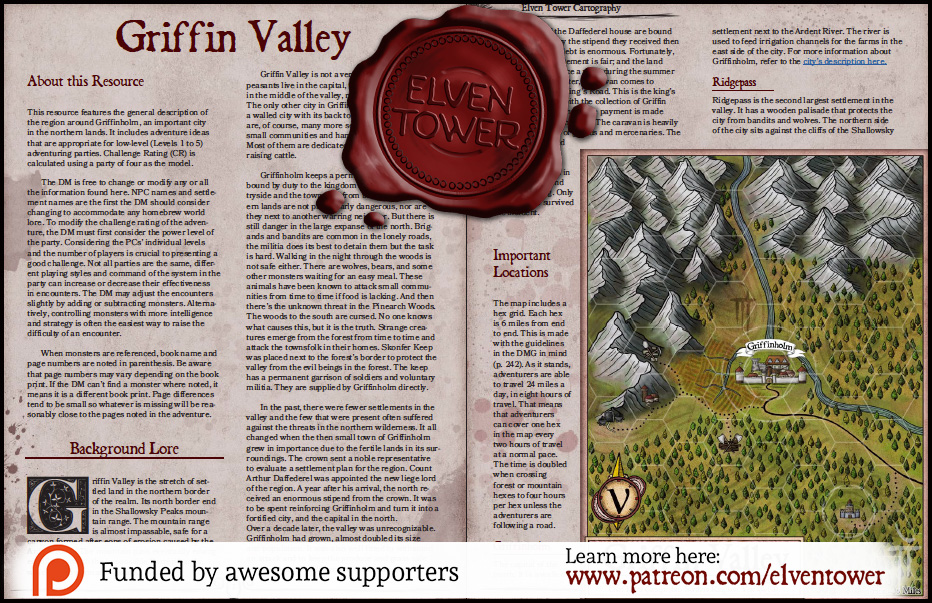 This resource features the general description of the region around Griffinholm, an important city in the northern lands. It includes adventure ideas that are appropriate for low-level (Levels 1 to 5) adventuring parties. Challenge Rating (CR) is calculated using a party of four as the model.

Griffin Valley is the stretch of settled land in the northern border of the realm. Its north border end in the Shallowsky Peaks mountain range. The mountain range is almost impassable, safe for a canyon formed after eons of erosion caused by the Ardent River. The mountain pass eventually emerges miles north to the impassable Barren Lands, which are in permafrost state.

Griffin Valley is not a very populated area. Most peasants live in the capital, Griffinholm, which sits in the middle of the valley, next to the Ardent River. The only other city in Griffin Valley is Ridgepass, a walled city with its back to the mountains. There are, of course, many more settlements in the valley, small communities and hamlets dot the countryside. Most of them are dedicated solely to farming and raising cattle.

Griffinholm keeps a permanent militia. It is bound by duty to the kingdom to protect the countryside and the townsfolk from threats. The northern lands are not particularly dangerous, nor are they next to another warring neighbor. But there is still danger in the large expanse of the north. Brigands and bandits are common in the lonely roads, the militia does its best to detain them but the task is hard. Walking in the night through the woods is not safe either. There are wolves, bears, and some other monsters waiting for an easy meal. These animals have been known to attack small communities from time to time if food is lacking. And then there’s the unknown threat in the Pinearch Woods. The woods to the south are cursed. No one knows what causes this, but it is the truth. Strange creatures emerge from the forest from time to time and attack the townsfolk in their homes. Skonfer Keep was placed next to the forest’s border to protect the valley from the evil beings in the forest. The keep has a permanent garrison of soldiers and voluntary militia. They are supplied by Griffinholm directly.

In the past, there were fewer settlements in the valley and the few that were present often suffered against the threats in the northern wilderness. It all changed when the then small town of Griffinholm grew in importance due to the fertile lands in its surroundings. The crown sent a noble representative to evaluate a settlement plan for the region. Count Arthur Daffederel was appointed the new liege lord of the region. A year after his arrival, the north received an enormous stipend from the crown. It was to be spent reinforcing Griffinholm and turn it into a fortified city, and the capital in the north.

Over a decade later, the valley was unrecognizable. Griffinholm had grown, almost doubled its size and population. It was also well fitted to withstand an attack and to keep the produce and grain safe from robbers. The latter was important because Griffinholm and the Daffederel house are bound by contract to repay the stipend they received then years earlier. The debt is enormous. Fortunately, the payment arrangement is fair; and the land remains fertile. Twice a year, during the summer and right before winter, a caravan comes to Griffinholm by the King’s Road. This is the king’s emissary, charged with the collection of Griffin Valley’s debt and tithes. The payment is made with grain, cattle, and gold. The caravan is heavily guarded by scores of guards and mercenaries. The caravan was raided once 2 years ago before the winter. Brigands attacked in great numbers and stole everything. Only a few guards survived the incident.

The map includes a hex grid. Each hex is 6 miles from end to end. This is made with the guidelines in the DMG in mind (p. 242). As it stands, adventurers are able to travel 24 miles a day, in eight hours of travel. That means that adventurers can cover one hex in the map every two hours of travel at a normal pace. The time is doubled when crossing forest or mountain hexes to four hours per hex unless the adventurers are following a road.

The capital of the north. It is a walled settlement next to the Ardent River. The river is used to feed irrigation channels for the farms in the east side of the city. For more information about Griffinholm, refer to the city’s description here: LINK

Ridgepass is the second largest settlement in the valley. It has a wooden palisade that protects the city from bandits and wolves. The northern side of the city sits against the cliffs of the Shallowsky Peaks. Ridgepass originally started as a temporary camp for laborers in the gold mine and the quarry. It eventually became a permanent residence for most workers and their families as it was easier and faster to live right next to the mines, instead of going all the way back to Griffinholm. The city’s ruler is Lord Damasco Fedall. He lives in the great watchtower in the city’s square. The watchtower is the city’s most prominent feature. It is wider than usual, it’s first level doubles up as a vault for gold and other precious things.

The small castle’s only objective is to keep the monsters that emerge from the Pinearch Woods at bay. The creatures often appear humanoid in form but their bodies are made of bushes, vines, and dry leaves. The creatures do not appear to speak any language and attack without remorse. There is a permanent garrison of twenty soldiers in Skonfer Keep and a changing group of other fifteen to twenty voluntary militia. The militia is formed of commoners and farmers that take a few weeks off to come help at the keep. The acting chief is Captain Luca Respro, a half-orc with a reputation of being ruthless.

The creatures that attack the region are several types of Blights (MM p. 31). They keep appearing because there is a Gulthias Tree deep in the center of the forest. The blights and sometimes other nastier creatures emerge from it indefinitely. If someone were to delve into the depths of the forest to destroy the tree, then the countryside would be spared of the constant struggle to survive the evil blights.

This camp is about 4 hours from Griffinholm. Loggers and carpenters travel to this camp every day to work, from Griffinholm, Ridgepass, and other smaller and unmarked communities. Work here never ends as the cities and communities need wood all year round for fire. Additionally, all settlements in the region have grown considerably in the past five years, making wood more necessary. The camp is not guarded in any significant way, making staying overnight dangerous. Workers usually return to their homes after the workday ends.

Rufus Rothben is a wealthy aristocrat who lives in the south. The man owns the mine and a fancy property in Griffinholm. Rufus visits his mine three times a year to oversee the mining. Rufus bought the mine long before the north became profitable. It was a struck of luck that made him filthy rich out of sheer luck. He still needs to pay a fair percentage to Griffinholm in tithes. This alone is one of the biggest sources of income to Griffinholm. There is a rumor that not all the gold mined goes to Rufus Rothben’s pockets, some people think a portion of the gold is siphoned out to a vault in Griffinholm.

The mine’s overseer, Galder, often hires mercenaries to clean out new sections of the mine. Sometimes they unearth underground creatures or passages to the Underdark and the miners are not suitable to fight them.

A few hours northeast of Griffinholm, there is a grove of pine trees that hug the mountainside. The grove appears unremarkable. The northerners have not explored it either. An ancient protector of the forests lives there. Graudufulos is an almost four thousand years old treant. It spends its days caring for the fantastic gardens and plants in the middle of the grove. He does not like visitors of any kind. A few faeries follow his commands and charm any human who approaches the grove, making them go back to their homes and forget about the encounter. Should any threat out of the ordinary menace the land and forests of the north, the ancient treant would meet it with fury.