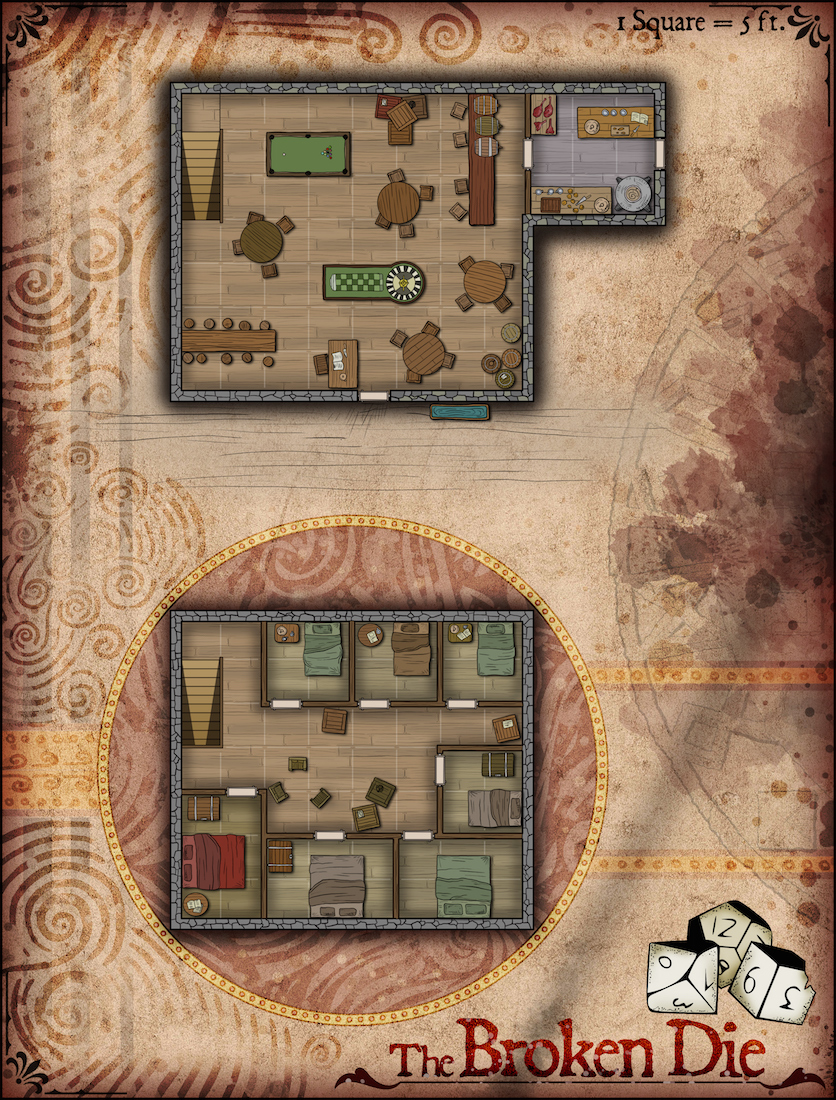 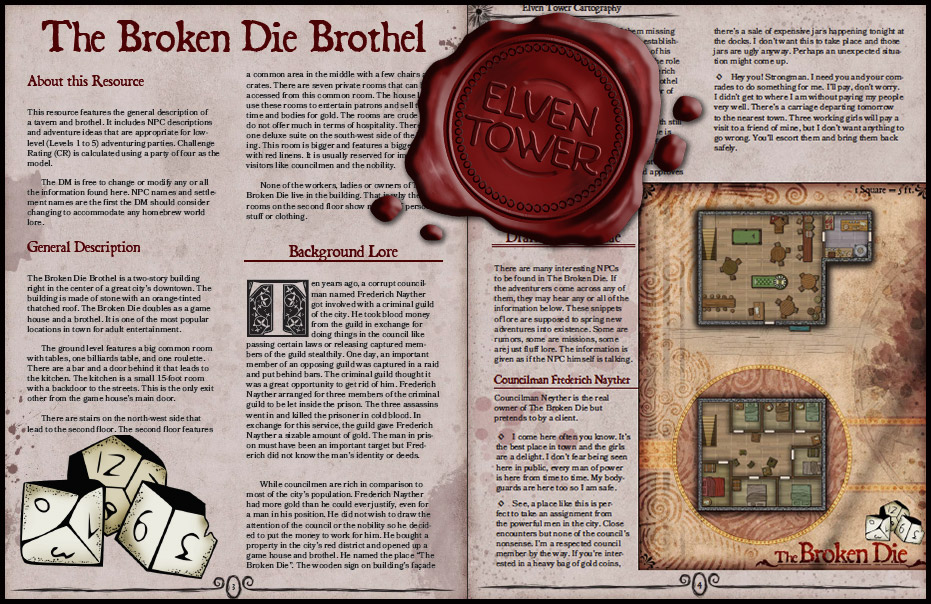 This resource features the general description of a tavern and brothel. It includes NPC descriptions and adventure ideas that are appropriate for low-level (Levels 1 to 5) adventuring parties. Challenge Rating (CR) is calculated using a party of four as the model.

The Broken Die Brothel is a two-story building right in the center of a great city’s downtown. The building is made of stone with an orange-tinted thatched roof. The Broken Die doubles as a game house and a brothel. It is one of the most popular locations in town for adult entertainment.

The ground level features a big common room with tables, one billiards table, and one roulette. There are a bar and a door behind it that leads to the kitchen. The kitchen is a small 15-foot room with a backdoor to the streets. This is the only exit other from the game house’s main door.

There are stairs on the north-west side that lead to the second floor. The second floor features a common area in the middle with a few chairs and crates. There are seven private rooms that can be accessed from this common room. The house ladies use these rooms to entertain patrons and sell their time and bodies for gold. The rooms are crude and do not offer much in terms of hospitality. There is one deluxe suite on the south-west side of the building. This room is bigger and features a bigger bed with red linens. It is usually reserved for important visitors like councilmen and the nobility.

None of the workers, ladies or owners of The Broken Die live in the building. That is why the rooms on the second floor show no sign of personal stuff or clothing.

These are the general features of The Broken Die, a tavern, and brothel in the heart of the city.

Terrain. The Broken Die has wooden floors and stone walls. The ground floor is usually packed with clients and is considered difficult terrain.

Light. The building has no windows. All light comes from torches in sconces on the walls and lamps on the tables. The rooms on the second floor only have candles.

Smells and Sounds. The ground floor is a lively place with people drinking, laughing, and gambling all the time. There’s also the sound of a minstrel from time to time playing the lute or a windpipe.

Ten years ago, a corrupt councilman named Frederich Nayther got involved with a criminal guild of the city. He took blood money from the guild in exchange for doing things in the council like passing certain laws or releasing captured members of the guild stealthily. One day, an important member of an opposing guild was captured in a raid and put behind bars. The criminal guild thought it was a great opportunity to get rid of him. Frederich Nayther arranged for three members of the criminal guild to be let inside the prison. The three assassins went in and killed the prisoner in cold blood. In exchange for this service, the guild gave Frederich Nayther a sizable amount of gold. The man in prison must have been an important target but Frederich did not know the man’s identity or deeds.

While councilmen are rich in comparison to most of the city’s population. Frederich Nayther had more gold than he could ever justify, even for a man in his position. He did not wish to draw the attention of the council or the nobility so he decided to put the money to work for him. He bought a property in the city’s red district and opened up a game house and brothel. He named the place “The Broken Die”. The wooden sign on building’s façade depicts three use-worn dice, one of them missing a chip. Frederich Nayther is often in the establishment but always as a patron. An associate of his and former prostitute, Madam Sazu, plays the role of owner and manager of the business. Frederich Nayther has avoided being linked with the brothel for over ten years. He is a well-known sponsor of the place but only that.

Madam Sazu is a middle-aged woman with still remaining beauty from her younger days. She is fearless, strict, and demanding with her staff and the working girls. Any client who wishes to spend time with any of the house ladies must first have a word with Madam Sazu, she controls and approves all transactions with the girls. She also collects all the money and pays the girls later.

There are many interesting NPCs to be found in The Broken Die. If the adventurers come across any of them, they may hear any or all of the information below. These snippets of lore are supposed to spring new adventures into existence. Some are rumors, some are missions, some are just fluff lore. The information is given as if the NPC himself is talking.

Councilman Neyther is the real owner of The Broken Die but pretends to by a client.

Madam Sazu is a middle-aged woman and the fake owner of The Broken Die.

Princess Diane is the most popular working girl in The Broken Die. She is a very expensive prostitute. She has brown hair and face features that are common in foreign countries to the west.

Arielle is another working girl in The Broken Die. She has red hair, brown eyes, and slim figure. She is secretly an agent of an opposing guild.

Gomo is a strong man that sits at the desk next to the entrance. He registers clients and exchanges their gold coins for gambling chips.

Sarsel is a minstrel and poet that visits The Broken Die often. She’ll share a song or a tale for a silver coin. He is also well loved by the working girls.