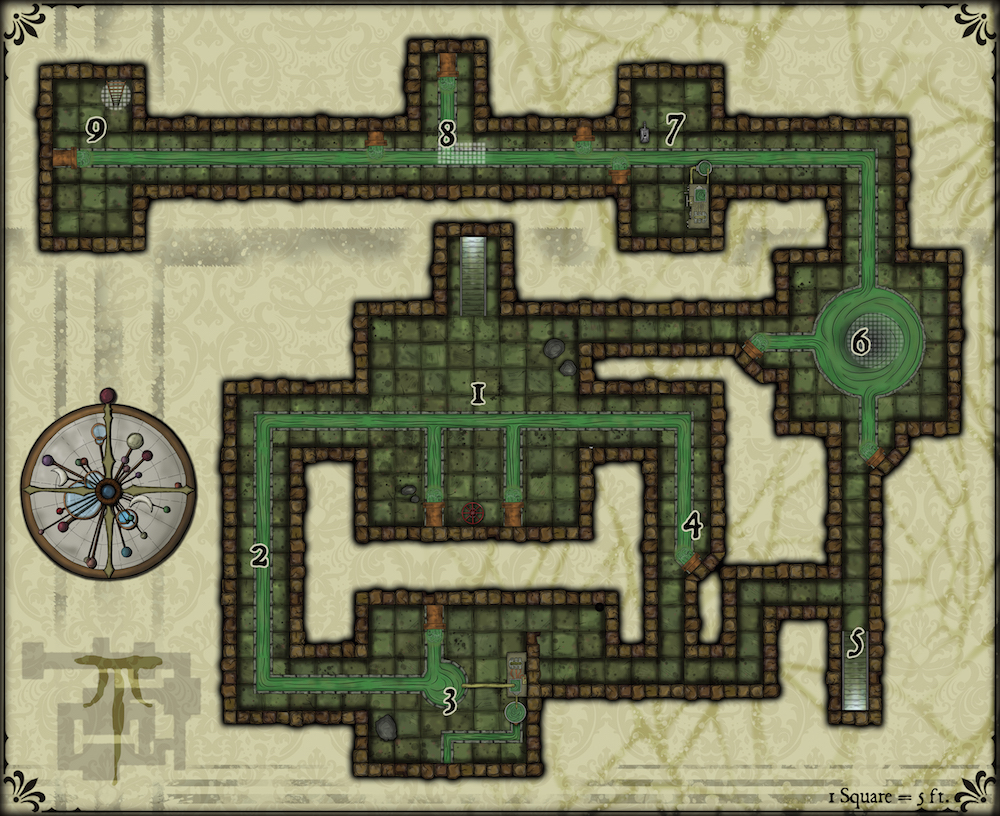 This resource features the general description of a section of the sewers under a big city. It includes adventure ideas that are appropriate for 3rd level adventuring parties (levels 1 to 5). Challenge Rating (CR) is calculated using a party of four as the model.

The DM is free to change or modify any or all the information found here. NPC names and settle­ment names are the first the DM should consider changing to accommodate any homebrew world lore. To modify the challenge rating of the adven­ture, the DM must first consider the power level of the party. Considering the PCs’ individual levels and the number of players is crucial to presenting a good challenge. Not all parties are the same, differ­ent playing styles and command of the system in the party can increase or decrease their effectiveness in encounters. The DM may adjust the encounters slightly by adding or subtracting monsters. Alterna­tively, controlling monsters with more intelligence and strategy is often the easiest way to raise the difficulty of an encounter.

When monsters are referenced, book name and page numbers are noted in parenthesis. Be aware that page numbers may vary depending on the book print. If the DM can’t find a monster where noted, it means it is a different book print. Page differences tend to be small so whatever is missing will be rea­sonably close to the pages noted in the adventure.

Gukit used to be a poor goblin misfit in the grand city of Rodella. Like other rejects of the surface dwellers, Gukit spends most of his time underground, away from the sun. It was somewhat fortunate, at least, that Gukit and a few of his fellow goblins had claimed a section of the sewers for themselves. Even the underworld real state was a delicate state of affairs among the different misfit groups.

Gukit and the rest of the goblins first came underground after getting fed up with working long hours in the surface market, suffering cruel treatment from their human overlords. They had to defeat a rival band of goblinoids for a section of the sewers complex. The goblins soon realized that as long as the sewers worked properly, no human would ever come because they despise underground filthy places. So they spent time clearing up pipes, digging obstructions away, and oiling the machines. It worked, and for a time, they have that corner of the world for themselves only. Some of the goblins kept their jobs in the market, knowing no other option. The rest of them started robbing and stealing. Gukit did not like violence, he preferred to break into homes to steal stuff like jewelry and gold.

Gukit was not smart enough to research the homes he broke into. Sometimes he broke into places that held nothing of value, other times he came across places guarded by armed men. But one fateful night, Gukit unknowingly found his way inside a wizard’s house. This was not a simple magic user, the owner of the house was researching evil summoning magic and binding rituals in his basement. Gukit found an immense book with arcane scribbles and runes. It held no value or meaning to him, so he ignored it. Rummaging around the mage’s basement, Gukit found a few precious stones and a leather bag with a few gold coins. It was a lot more than he had managed to steal in the past week, so Gukit was satisfied. But that was not the only things he took that day, on his way out, he saw a waterskin hanging from the inside of the basement’s door. The black leather waterskin had some strange runes marked on its surface. It was warm to the touch too. Gukit packed it in his sack and fled the scene.

Later that night, Gukit was safely back in the sewers. Gukit did not dare drink from the leather waterskin, fearing poison or worse. He had ransacked a mage’s house after all. He decided to feed a sewer rat with the clear water inside the waterskin. Nothing appeared to occur to the rat at first, so Gukit went to sleep. Upon waking up, Gukit discovered that the rat was now ten times bigger and waiting for him. Gukit could not know, but the waterskin was imbued with energy from the Feywild.

As the refrain says, “Give power to a goblin and he will abuse it”. And Gukit did exactly that. Gukit started feeding the magical water to scores of rats. For some reason, some of them did not survive the transformation and died. But the rest became big and powerful. The other goblins were astonished, they had no choice but to obey Gukit’s commands. He was in charge now. Gukit discovered that the water replenished itself automatically after a few days, he would have as much as he needed. There was a small crocodile in the sewers that the goblins used to scare off from time to time from their territory. Now they lured the beast and fed it enlarged rats, after a few weeks the crocodile grew twice its size and started heeding Gukit’s commands.

Since then, none of Gukit’s goblins have worked at the market anymore. Now they rob anyone and terrorize the populace with their giant rats. They are big enough to ride. The rats only obey Gukit, but he often orders them to follow other goblins and help them. The rats appear to understand even slightly complex requests.

If the adventurers speak to an innkeeper, guard, minstrel, or a victim of Gukit’s robberies, they may collect any or all of the following information:

These are the general features of the sewers section where Gukit is hiding. There are three different entrance to this section of the sewers.

Terrain. The floor is made of stone tiles. There is a high level of humidity that makes the stone slightly slippery at all times, not enough to worry, but it is noticeable. Any square that shares its space with a waterway is considered difficult terrain.

Light. The sewers are in complete darkness in most places. The places immediately next to a manhole or an entrance are considered to be in low light. The goblins only light a fire to cook. Otherwise, they rely on their keen darkvision sense.

Smells and Sounds. The sound of running water is always present. The smell of the sewers is repugnant and strong. Any adventurer coming here must make a DC 12 Constitution check to avoid becoming poisoned (as in the condition) for 5 minutes as their bodies adapt to the smell.

This area of the sewers features an exit ramp. 2 Goblins (MM. page 166) and 2 Giant Rats (MM. page 327) are in this location at any given time. They attack any intruders on sight.

This tunnel appears empty, but Gukit and his goblins set a trap for unwanted visitors here. The ceiling is unstable, only held in place by a wooden beam tied to a trigger thread near the floor. If an adventurer walks through the trigger line, it causes the wooden beam to fall, along with a great number of rocks. Any adventurer with a passive Wisdom (Perception) score of 14 or higher notices the thread and can choose to avoid stepping through it. If the trap is activated, any creature in a 10-foot square under it must make a DC 14 Dexterity saving throw to avoid taking 10 (3d6) bludgeoning damage.

This chamber features a machine that is designed to filter the filthy water through some alchemical process. Gukit is here. He is confident that no surface dwellers are a match for him with his new animal allies. He has 4 Giant Rats (MM. page 327) and 2 Goblin (MM. page 166) allies here with him. If things go bad for them, Gukit will attempt to flee to the east, to reach the exit ramp in Area 5.

This pipe collects the all the water that comes from the market neighborhood. Some goblins use it to get there faster, but filthier. If adventurers wish to enter the sewers unannounced, they may come through this pipe and surprise the goblins in their home.

The whirlpool in this chamber collects the sewage from most of the city. The water drains down and eventually reaches the ocean. Gukit’s Giant Crocodile (MM. page 324) is here. It only attacks if disturbed. The animal is hiding. Any adventurer with a passive Wisdom (Perception) score of 14 or higher notices the enormous animal immobile near the surface. This beast ate the three guards that came exploring a few days ago.

The alcove in this section features a control station for several of the pipes. The lever closes the water flow of all pipes from Area 9 to Area 7, that makes the terrain normal for the squares that share their space with the waterways.

Light comes from a rectangular manhole directly on top of this area. There are 3 Goblins (MM. page 166) in this area. If the adventurers wish to enter through this manhole and manage to kill the 3 goblins from the surface without them raising the alarm, the enter the sewers stealthily and may surprise other goblins in the place.

There is a ladder that leads up to a manhole here. This is where the guard captain sent three men to explore. Since they never returned, the captain might recommend the adventurers to find a different way to access the sewers. There are 4 Giant Rats (MM. page 327) here.