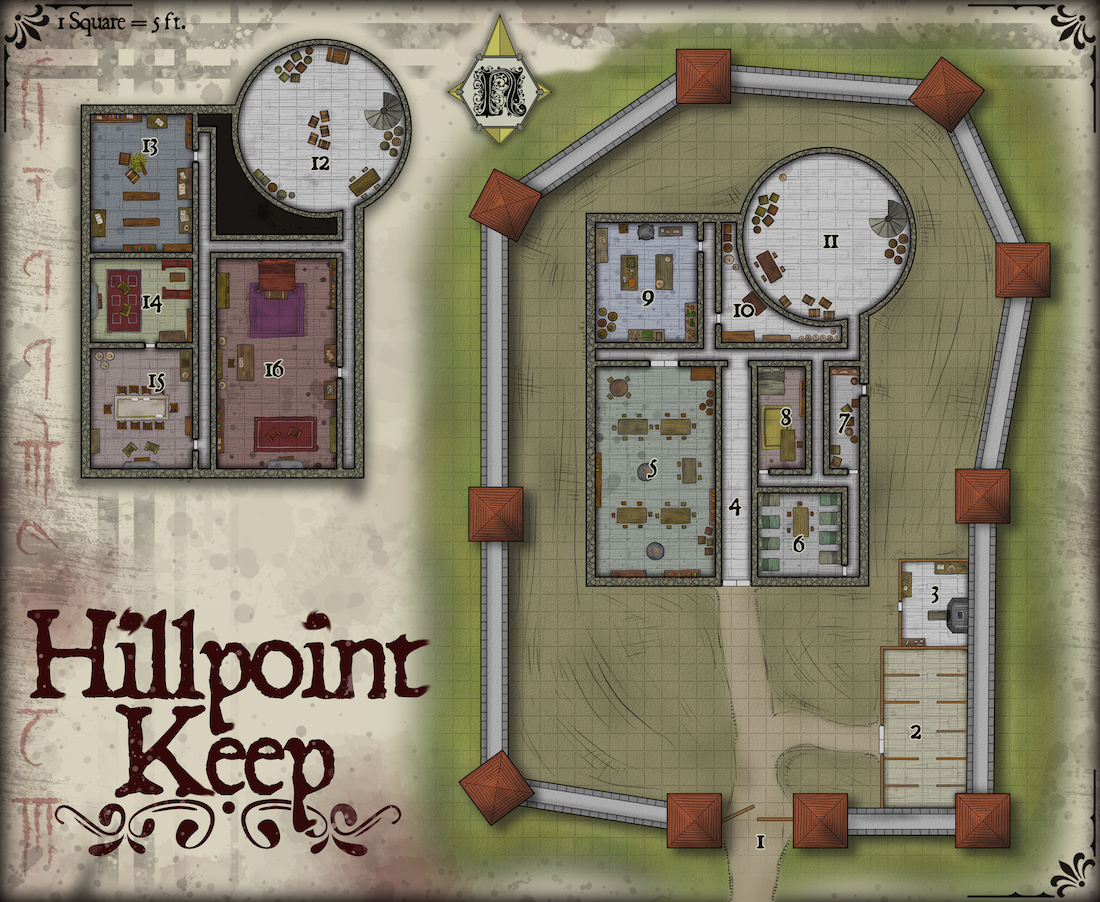 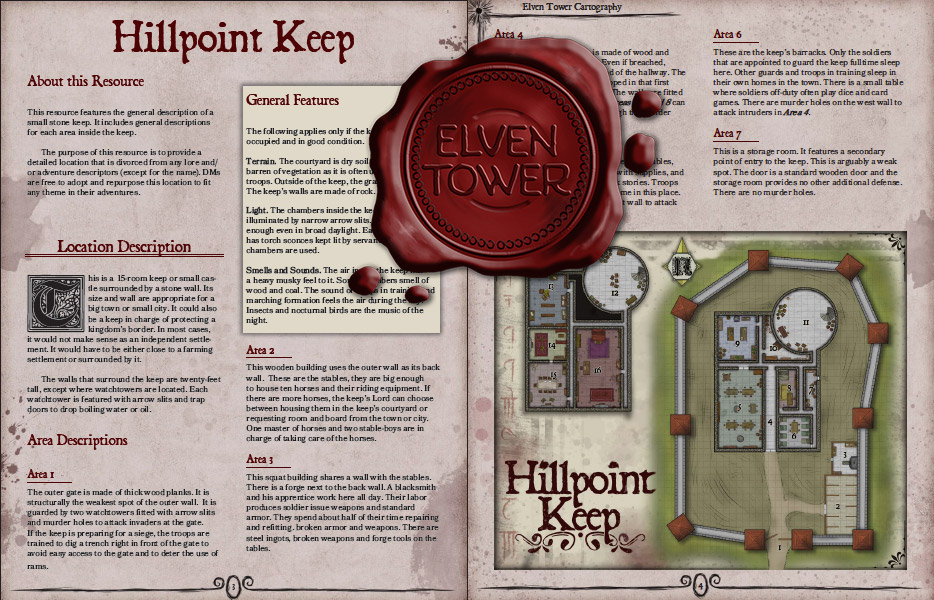 The purpose of this resource is to provide a detailed location that is divorced from any lore and/or adventure descriptors (except for the name). DMs are free to adapt and repurpose this location to fit any theme in their adventures.

This is a 15-room keep or small castle surrounded by a stone wall. Its size and wall are appropriate for a big town or small city. It could also be a keep in charge of protecting a kingdom’s border. In most cases, it would not make sense as an independent settlement. It would have to be either close to a farming settlement or surrounded by it.

The walls that surround the keep are twenty-feet tall, except where watchtowers are located. Each watchtower is featured with arrow slits and trap doors to drop boiling water or oil.

The following applies only if the keep is currently occupied and in good condition.

Terrain. The courtyard is dry soil. The place is barren of vegetation as it is often used for training troops. Outside of the keep, the grass is abundant. The keep’s walls are made of rock.

Light. The chambers inside the keep are faintly illuminated by narrow arrow slits. This is not enough even in broad daylight. Each chamber has torch sconces kept lit by servants when the chambers are used.

Smells and Sounds. The air inside the keep has a heavy musky feel to it. Some chambers smell of wood and coal. The sound of troops in training and marching formation feels the air during the day. Insects and nocturnal birds are the music of the night.

The outer gate is made of thick wood planks. It is structurally the weakest spot of the outer wall. It is guarded by two watchtowers fitted with arrow slits and murder holes to attack invaders at the gate. If the keep is preparing for a siege, the troops are trained to dig a trench right in front of the gate to avoid easy access to the gate and to deter the use of rams.

This wooden building uses the outer wall as its back wall. These are the stables, they are big enough to house ten horses and their riding equipment. If there are more horses, the keep’s Lord can choose between housing them in the keep’s courtyard or requesting room and board from the town or city. One master of horses and two stable-boys are in charge of taking care of the horses.

This squat building shares a wall with the stables. There is a forge next to the back wall. A blacksmith and his apprentice work here all day. Their labor produces soldier issue weapons and standard armor. They spend about half of their time repairing and refitting. broken armor and weapons. There are steel ingots, broken weapons and forge tools on the tables.

The keep’s main entrance is made of wood and reinforced with steel beams. Even if breached, there is a barred door at the end of the hallway. The purpose is to keep invaders trapped in that first hallway for as long as possible. The walls are fitted with murder holes. Soldiers in Areas 5, 6, and 8 can attack with pointy weapons through the murder holes.

This is the common hall. There are many tables, cooking pots, barrels and crates with supplies, and a few bookcases with popular folk stories. Troops and servants spend their leisure time in this place. There are murder holes on the east wall to attack intruders in Area 4.

These are the keep’s barracks. Only the soldiers that are appointed to guard the keep fulltime sleep here. Other guards and troops in training sleep in their own homes in the town. There is a small table where soldiers off-duty often play dice and card games. There are murder holes on the west wall to attack intruders in Area 4.

This is a storage room. It features a secondary point of entry to the keep. This is arguably a weak spot. The door is a standard wooden door and the storage room provides no other additional defense. There are no murder holes.

This room is reserved for the guard’s captain. The captain is usually a trusted advisor to the keep’s Lord. Also, it is customary that the guard’s captain has a nobility title. Usually, knighthood is enough. There is a desk in the room and a bookcase. There are murder holes on the west wall to attack intruders in Area 4.

The keep’s kitchen is usually a very busy place. Depending on the keeps current activities and people operating inside, the kitchen should be able to feed thirty people or more a day. There are several tables and cupboards, wine casks near the west wall, a coal stove, and boxes of produce. Up to eight servants work here.

This room is irregularly shaped because it is next to the keep’s tower. It is used for storage and as a larder. Kitchen servants come and go all the time retrieving food supplies. Linens, torches, oil, and other various supplies fill the crates in barrels in this room.

This is the base level of the keep’s tower. It is used for general storage. It is also the keep’s armory. Weapons and armor lie about in disarray. The spiral stairs connect the area with the dungeons below, and the tower’s higher level above.

This is the higher level of the keep’s tower. It is used for general storage. There are arrow slits and drop holes all around the walls. It is a very busy place if the keep is invaded and intruders manage to get access to the courtyard. The arrow slits and murder holes are designed to attack enemies directly next to the tower at ground level. The spiral stairs are the only access point to the second story. The stairs upper section can be walled off with a barred trap door that blocks access from the stairs to Area 12.

This is the keep’s library and study. Soldiers and servants are restricted from this area. It is mostly used by the keep’s Lord only. There are five bookcases in this room and three desks. There are ledgers, journals, and maps of the region stored here. Ïf the DM determines that there is a wizard in service or the Keep’s Lord is a magic-user, then the library also stores copies of spellbooks and magic scrolls.

This cozy chamber is the Lord’s den. Soldiers and servants are restricted from this area. The Lord holds amiable meetings in this place near the fireplace. The carpet on the floor was a gift from a foreign dignitary, it features exquisite craftsmanship. There are two seats near the east wall. There are eight stuffed animal heads mounted on the walls. These are hunting trophies. Most of these animals were hunted by the Lord’s father.

This is the Lord’s dining hall. Soldiers and servants are restricted from this area. The ten-seat table is always set and decorated. The Lord always indulges his visitors with a feast when they arrive. The walls of this room are decorated with fine oil paintings. The paintings depict other members of the Lord’ family.

This is the master bedroom and one of the biggest chambers in the keep. Soldiers and servants are restricted from this area. The north wall is dominated by the Lord’s bed. The velvet red sheets a clear statement of the Lord’s wealth. The wardrobe next to the bed stores the Lord’s garments and clothes. The Lord also uses this as his personal office. There are a bookcase and desk next to the west wall. The south wall features a fireplace. A red velvet carpet and two comfortable-looking seats.