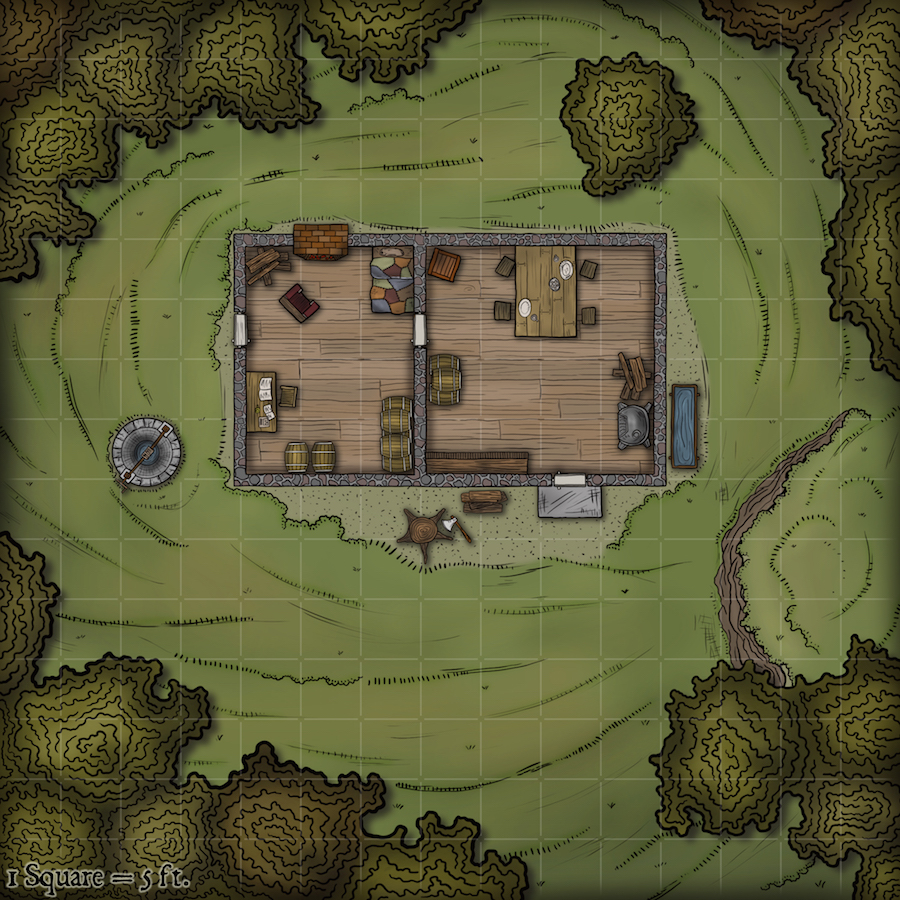 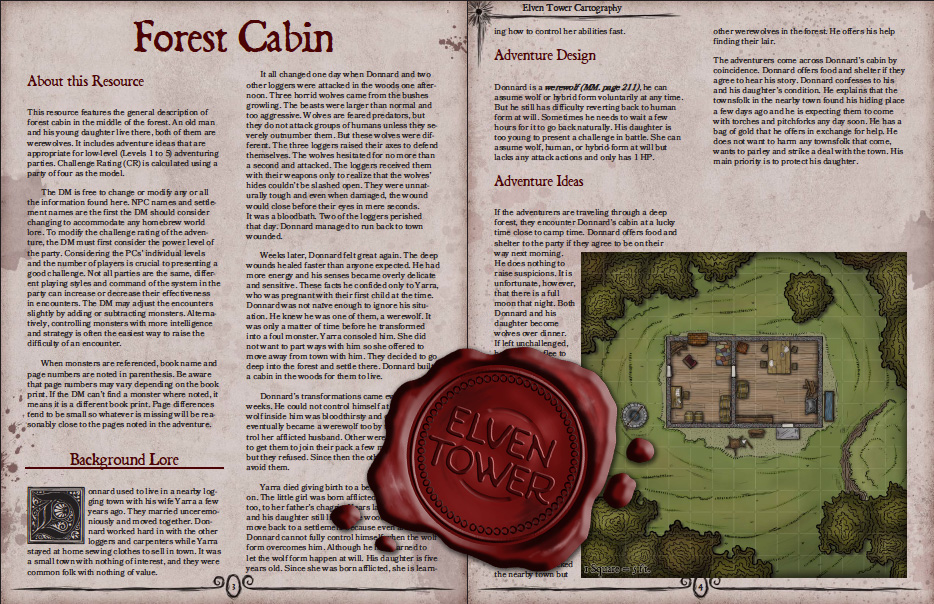 This resource features the general description of forest cabin in the middle of the forest. An old man and his young daughter live there, both of them are werewolves. It includes adventure ideas that are appropriate for low-level (Levels 1 to 5) adventuring parties. Challenge Rating (CR) is calculated using a party of four as the model.

Donnard used to live in a nearby logging town with his wife Yarra a few years ago. They married unceremoniously and moved together. Donnard worked hard in with the other loggers and carpenters while Yarra stayed at home sewing clothes to sell in town. It was a small town with nothing of interest, and they were common folk with nothing of value.

It all changed one day when Donnard and two other loggers were attacked in the woods one afternoon. Three horrid wolves came from the bushes growling. The beasts were larger than normal and too aggressive. Wolves are feared predators, but they do not attack groups of humans unless they severely outnumber them. But these wolves were different. The three loggers raised their axes to defend themselves. The wolves hesitated for no more than a second and attacked. The loggers received them with their weapons only to realize that the wolves’ hides couldn’t be slashed open. They were unnaturally tough and even when damaged, the wound would close before their eyes in mere seconds.

It was a bloodbath. Two of the loggers perished that day. Donnard managed to run back to town wounded.

Weeks later, Donnard felt great again. The deep wounds healed faster than anyone expected. He had more energy and his senses became overly delicate and sensitive. These facts he confided only to Yarra, who was pregnant with their first child at the time. Donnard was not naïve enough to ignore his situation. He knew he was one of them, a werewolf. It was only a matter of time before he transformed into a foul monster. Yarra consoled him. She did not want to part ways with him so she offered to move away from town with him. They decided to go deep into the forest and settle there. Donnard built a cabin in the woods for them to live.

Donnard’s transformations came every few weeks. He could not control himself at first. The wolf inside him was bloodthirsty and cruel. Yarra eventually became a werewolf too by trying to control her afflicted husband. Other werewolves tried to get them to join their pack a few months later but they refused. Since then the other lycanthropes avoid them.

Yarra died giving birth to a beautiful girl later on. The little girl was born afflicted with lycanthropy too, to her father’s chagrin. Years later, Donnard and his daughter still live in the woods. They cannot move back to a settlement because even after years, Donnard cannot fully control himself when the wolf form overcomes him. Although he has learned to let the wolf form happen at will. His daughter is five years old. Since she was born afflicted, she is learning how to control her abilities fast.

Donnard is a werewolf (MM. page 211), he can assume wolf or hybrid form voluntarily at any time. But he still has difficulty reverting back to human form at will. Sometimes he needs to wait a few hours for it to go back naturally. His daughter is too young to present a challenge in battle. She can assume wolf, human, or hybrid-form at will but lacks any attack actions and only has 1 HP.

If the adventurers are traveling through a deep forest, they encounter Donnard’s cabin at a lucky time close to camp time. Donnard offers food and shelter to the party if they agree to be on their way next morning. He does nothing to raise suspicions. It is unfortunate, however, that there is a full moon that night. Both Donnard and his daughter become wolves over dinner. If left unchallenged, both of them flee to the woods.

The adventurers come across Donnard’s cabin by coincidence. Donnard offers food and shelter if they agree to hear his story. Donnard confesses to his and his daughter’s condition. He explains that the townsfolk in the nearby town found his hiding place a few days ago and he is expecting them to come with torches and pitchforks any day soon. He has a bag of gold that he offers in exchange for help. He does not want to harm any townsfolk that come, wants to parley and strike a deal with the town. His main priority is to protect his daughter. 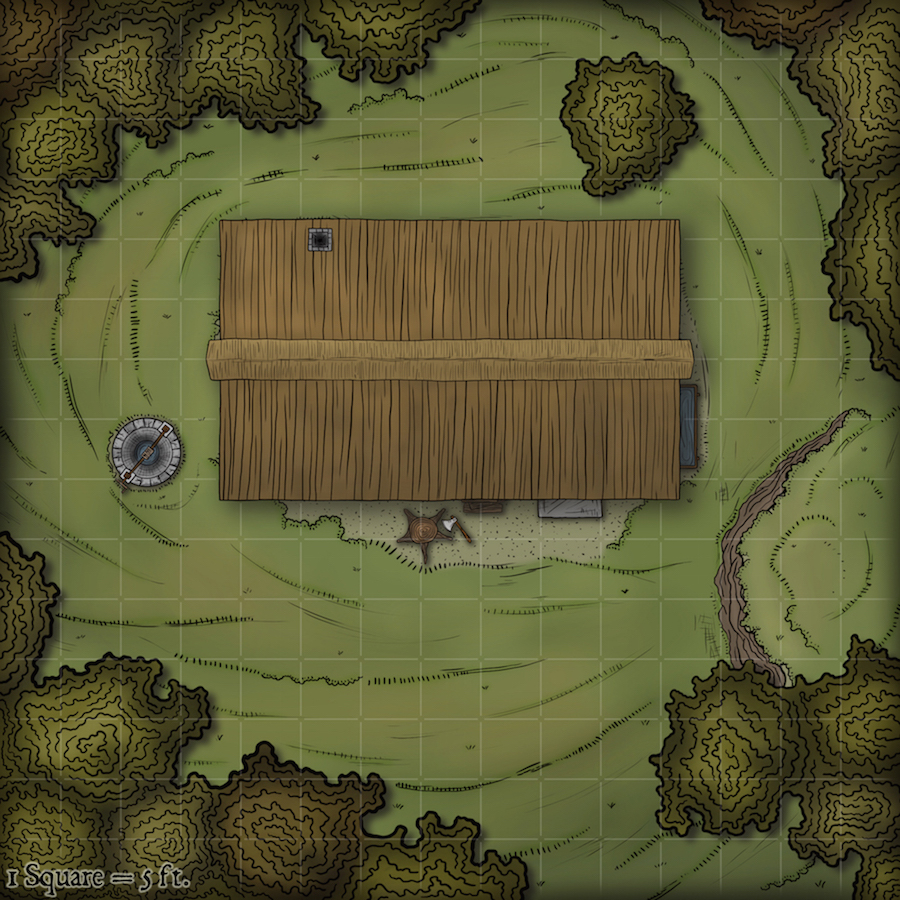