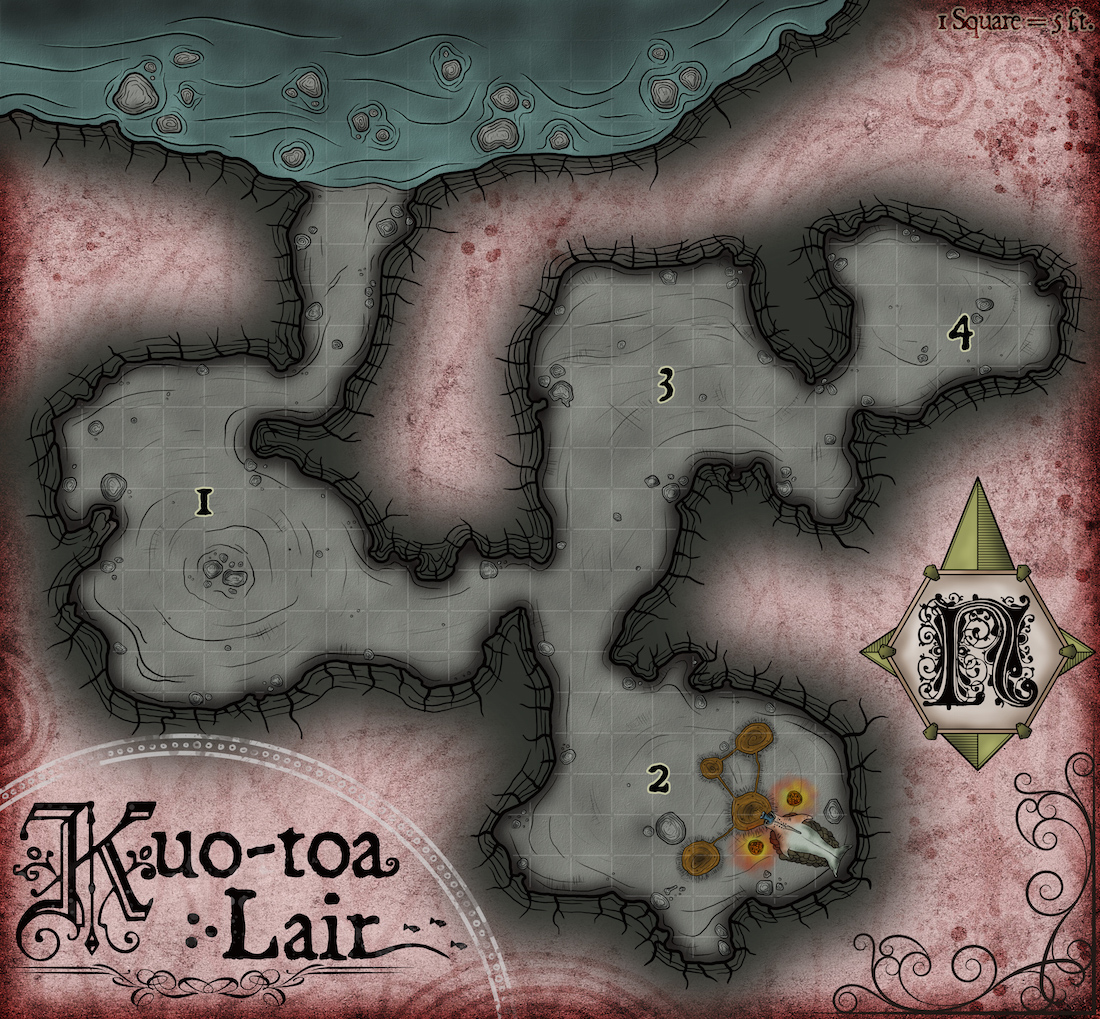 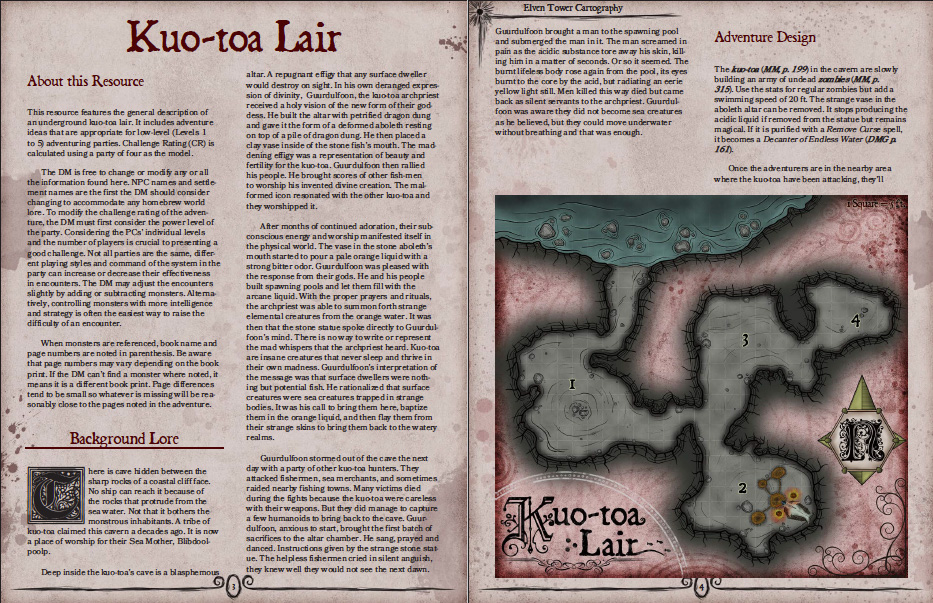 This resource features the general description of an underground kuo-toa lair. It includes adventure ideas that are appropriate for low-level (Levels 1 to 5) adventuring parties. Challenge Rating (CR) is calculated using a party of four as the model.

There is cave hidden between the sharp rocks of a coastal cliff face. No ship can reach it because of the rocks that protrude from the sea water. Not that it bothers the monstrous inhabitants. A tribe of kuo-toa claimed this cavern a decades ago. It is now a place of worship for their Sea Mother, Blibdoolpoolp.

Deep inside the kuo-toa’s cave is a blasphemous altar. A repugnant effigy that any surface dweller would destroy on sight. In his own deranged expression of divinity, Guurdulfoon, the kuo-toa archpriest received a holy vision of the new form of their goddess. He built the altar with petrified dragon dung and gave it the form of a deformed aboleth resting on top of a pile of dragon dung. He then placed a clay vase inside of the stone fish’s mouth. The maddening effigy was a representation of beauty and fertility for the kuo-toa. Guurdulfoon then rallied his people. He brought scores of other fish-men to worship his invented divine creation. The malformed icon resonated with the other kuo-toa and they worshipped it.

After months of continued adoration, their subconscious energy and worship manifested itself in the physical world. The vase in the stone aboleth’s mouth started to pour a pale orange liquid with a strong bitter odor. Guurdulfoon was pleased with the response from their gods. He and his people built spawning pools and let them fill with the arcane liquid. With the proper prayers and rituals, the archpriest was able to summon forth strange elemental creatures from the orange water. It was then that the stone statue spoke directly to Guurdulfoon’s mind. There is no way to write or represent the mad whispers that the archpriest heard. Kuo-toa are insane creatures that never sleep and thrive in their own madness. Guurdulfoon’s interpretation of the message was that surface dwellers were nothing but potential fish. He rationalized that surface creatures were sea creatures trapped in strange bodies. It was his call to bring them here, baptize them in the orange liquid, and then flay them from their strange skins to bring them back to the watery realms.

Guurdulfoon stormed out of the cave the next day with a party of other kuo-toa hunters. They attacked fishermen, sea merchants, and sometimes raided nearby fishing towns. Many victims died during the fights because the kuo-toa were careless with their weapons. But they did manage to capture a few humanoids to bring back to the cave. Guurdulfoon, anxious to start, brought the first batch of sacrifices to the altar chamber. He sang, prayed and danced. Instructions given by the strange stone statue. The helpless fishermen cried in silent anguish, they knew well they would not see the next dawn. Guurdulfoon brought a man to the spawning pool and submerged the man in it. The man screamed in pain as the acidic substance tore away his skin, killing him in a matter of seconds. Or so it seemed. The burnt lifeless body rose again from the pool, its eyes burnt to the core by the acid, but radiating an eerie yellow light still. Men killed this way died but came back as silent servants to the archpriest. Guurdulfoon was aware they did not become sea creatures as he believed, but they could move underwater without breathing and that was enough.

The kuo-toa (MM, p. 199) in the cavern are slowly building an army of undead zombies (MM, p. 315). Use the stats for regular zombies but add a swimming speed of 20 ft. The strange vase in the aboleth altar can be removed. It stops producing the acidic liquid if removed from the statue but remains magical. If it is purified with a Remove Curse spell, it becomes a Decanter of Endless Water (DMG p. 161).

Once the adventurers are in the nearby area where the kuo-toa have been attacking, they’ll soon hear the terrible things they have done. If the adventurers go looking for rumors or information in taverns or inns, they may hear some of the following information:

The DM is free to determine whether there are any remaining survivors Otherwise, all prisoners are now zombies.

The first chamber is protected by a group of 6 kuo-toa and 4 zombies. Adventurers notice that the zombies still wear clothing similar to other people from nearby towns.

The mad statue awaits in this room. Guurdulfoon (kuo-toa archpriest)is here, along with 2 kuo-toa and 4 zombies. They fight fiercely, but if the kuo-toa start losing the fight, Guurdulfoon has a divine vision again. He tries to stop the fight and communicate with the adventurers. If any form of communication is possible, he informs the adventurers that they are the chosen ones. They are chosen to represent the will of the Sea Mother in the surface of the world. If they agree to accept the kuo-toa’s offer, Guurdulfoon and the other kuo-toa become allies. That does not mean that they pretend to stop killing people. The DM is free to determine the meaning of this alliance.

The first chamber is protected by a group of 3 kuo-toa and 4 zombies. Adventurers notice that the zombies still wear clothing similar to other people from nearby towns.

This chamber is an improvised cell. The personal belongings and some clothing of the kidnapped fishermen are here. The DM is free to determine whether there are any survivors left.