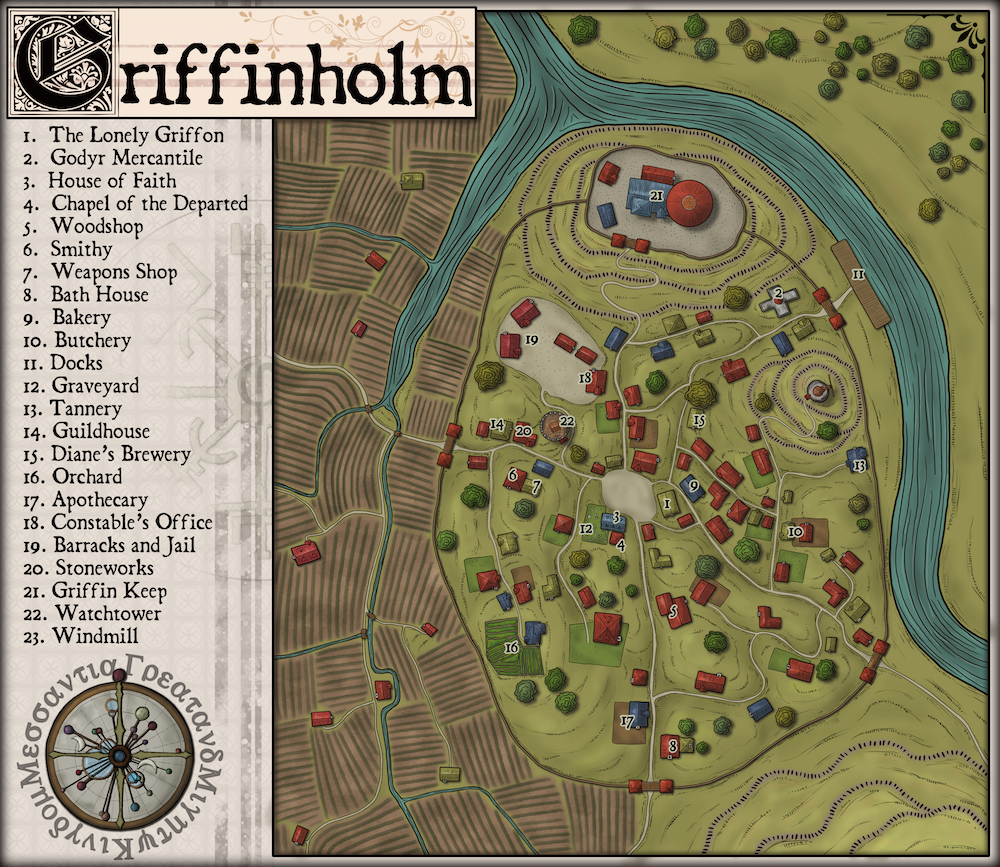 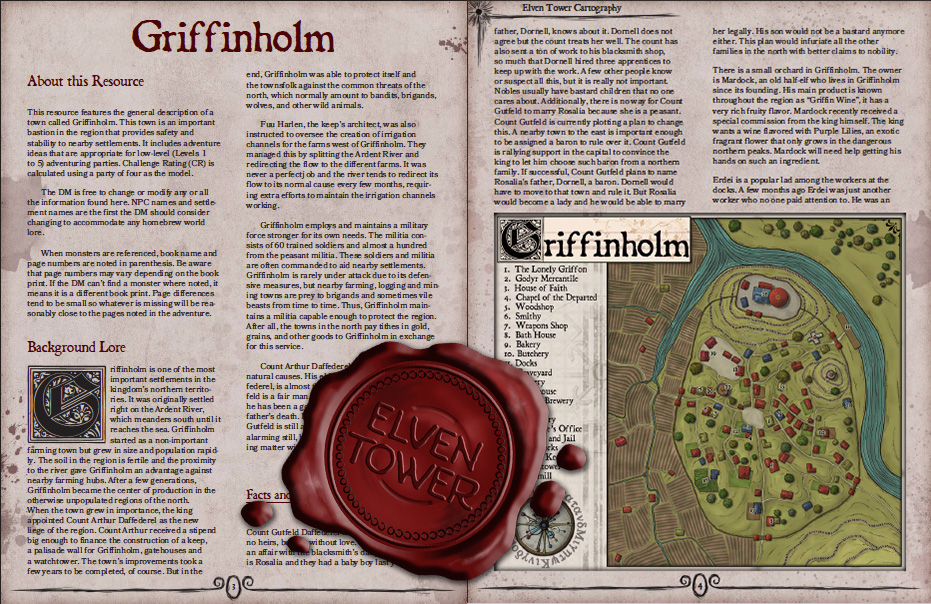 This resource features the general description of a town called Griffinholm. This town is an important bastion in the region that provides safety and stability to nearby settlements. It includes adventure ideas that are appropriate for low-level (Levels 1 to 5) adventuring parties. Challenge Rating (CR) is calculated using a party of four as the model.

Griffinholm is one of the most important settlements in the kingdom’s northern territories. It was originally settled right on the Ardent River, which meanders south until it reaches the sea. Griffinholm started as a non-important farming town but grew in size and population rapidly. The soil in the region is fertile and the proximity to the river gave Griffinholm an advantage against nearby farming hubs. After a few generations, Griffinholm became the center of production in the otherwise unpopulated regions of the north.

When the town grew in importance, the king appointed Count Arthur Daffederel as the new liege of the region. Count Arthur received a stipend big enough to finance the construction of a keep, a palisade wall for Griffinholm, gatehouses and a watchtower. The town’s improvements took a few years to be completed, of course. But in the end, Griffinholm was able to protect itself and the townsfolk against the common threats of the north, which normally amount to bandits, brigands, wolves, and other wild animals.

Fuu Harlen, the keep’s architect, was also instructed to oversee the creation of irrigation channels for the farms west of Griffinholm. They managed this by splitting the Ardent River and redirecting the flow to the different farms. It was never a perfect job and the river tends to redirect its flow to its normal cause every few months, requiring extra efforts to maintain the irrigation channels working.

Griffinholm employs and maintains a military force stronger for its own needs. The militia consists of 60 trained soldiers and almost a hundred from the peasant militia. These soldiers and militia are often commanded to aid nearby settlements. Griffinholm is rarely under attack due to its defensive measures, but nearby farming, logging and mining towns are prey to brigands and sometimes vile beasts from time to time. Thus, Griffinholm maintains a militia capable enough to protect the region. After all, the towns in the north pay tithes in gold, grains, and other goods to Griffinholm in exchange for this service.

Count Arthur Daffederel died a few years ago of natural causes. His eldest son, Count Gutfeld Daffederel, is almost thirty and unmarried. Count Gutfeld is a fair man, his father educated him well and he has been a good protector of the north since his father’s death. It is a growing concern that Count Gutfeld is still a bachelor with no heirs. Nothing too alarming still, because he is still young, but a pressing matter with each passing year.

Count Gutfeld Daffederel is unmarried and with no heirs, but not without love. Count Gutfeld has an affair with the blacksmith’s daughter. Her name is Rosalia and they had a baby boy last year. Her father, Dornell, knows about it. Dornell does not agree but the count treats her well. The count has also sent a ton of work to his blacksmith shop, so much that Dornell hired three apprentices to keep up with the work. A few other people know or suspect all this, but it is really not important. Nobles usually have bastard children that no one cares about. Additionally, there is no way for Count Gutfeld to marry Rosalia because she is a peasant. Count Gutfeld is currently plotting a plan to change this. A nearby town to the east is important enough to be assigned a baron to rule over it. Count Gutfeld is rallying support in the capital to convince the king to let him choose such baron from a northern family. If successful, Count Gutfeld plans to name Rosalia’s father, Dornell, a baron. Dornell would have to move to that town and rule it. But Rosalia would become a lady and he would be able to marry her legally. His son would not be a bastard anymore either. This plan would infuriate all the other families in the north with better claims to nobility.

There is a small orchard in Griffinholm. The owner is Mardock, an old half-elf who lives in Griffinholm since its founding. His main product is known throughout the region as “Griffin Wine”, it has a very rich fruity flavor. Mardock recently received a special commission from the king himself. The king wants a wine flavored with Purple Lilies, an exotic fragrant flower that only grows in the dangerous northern peaks. Mardock will need help getting his hands on such an ingredient.

Erdei is a popular lad among the workers at the docks. A few months ago Erdei was just another worker who no one paid attention to. He was an orphan. But now, everyone seems to love him, for some reason. People love to do his work and favor him. Strangest of all is that Erdei always carries a toy doll with him. It is usually tied with a piece of fabric to his belt. What no one knows is the fact that Erdei found the toy doll hidden in a warehouse in the House of Faith. It had been abandoned there for years. The doll does not appear to have any value. The toy belonged to girls in the temple’s orphanage, it was passed down for many generations. It was loved so much by those girls that a deity of compassion blessed the doll with the power of charm. The user can cast Charm Person once per day. It takes a week to attune to the user. The user may not put it down.

Griffinholm receives travelers all the time. It is not strange to have a merchant caravan stationed in the town’s central square. There is sometimes an interesting character in the caravan. People call him simply “The Doctor”. It is a kenku wizard with no name. People claim he has a strange power to cure the incurable. There is also the appearance of people claiming they were cured of blindness, terrible wounds and what not. In reality, it is all a scam and the cured-ones are in on it. They receive ill people and prey on their faith for a magical cure and rip them out of their gold before leaving town with the caravan.

Dustan Millwright owns the windmill which grinds the town’s grain. He is also a retired adventurer who leads the town militia when danger approaches. He returned home to marry his sweetheart and raise a family. Despite this, he is on the front lines every time there is a threat to Griffinholm or any other northern settlement.

One-eyed Maggie, the village crone who spends her days spitting seed shells off her porch at passersby has started going insane. She has been bitter for years since losing her eye (there are many rumors how), so not many have noticed her growing insanity yet. Now she is plotting something special for the village’s children. She is baking sugar cookies to lure naïve children to her basement where she already has three kids captured. In reality, One-eyed Maggie died last year in her home. She was poisoned by a hag a Sea Hag (MM p. 179) that came from the Ardent River. The hag replaced One-eyed Maggie ever since, taking on the appearance of the diseased old lady.