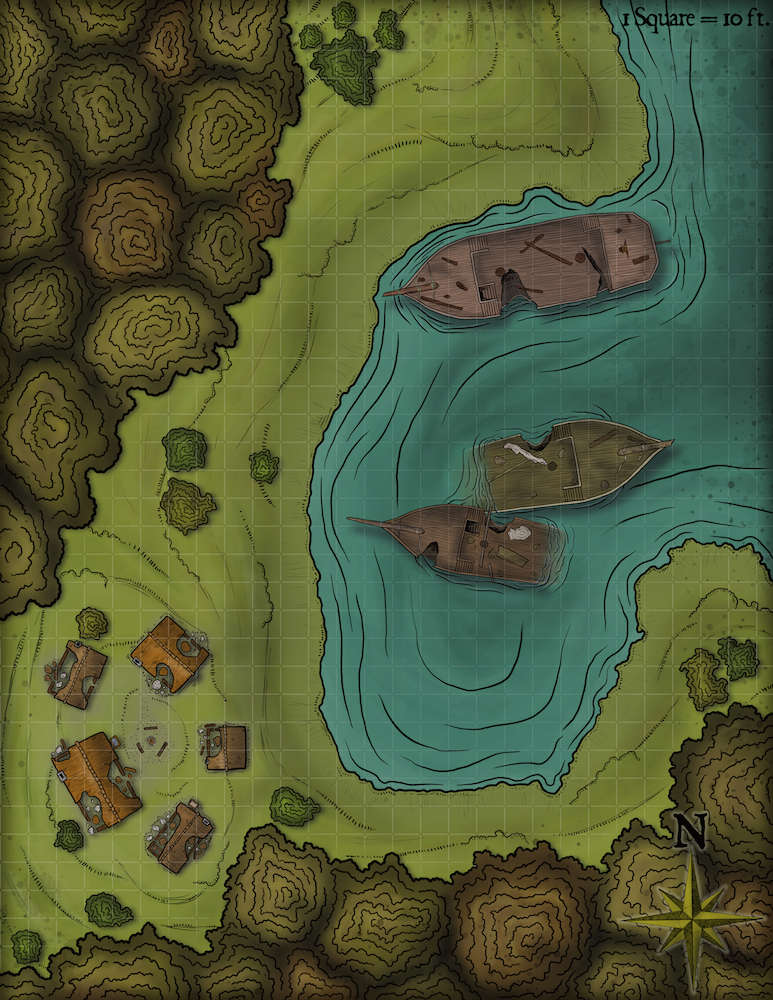 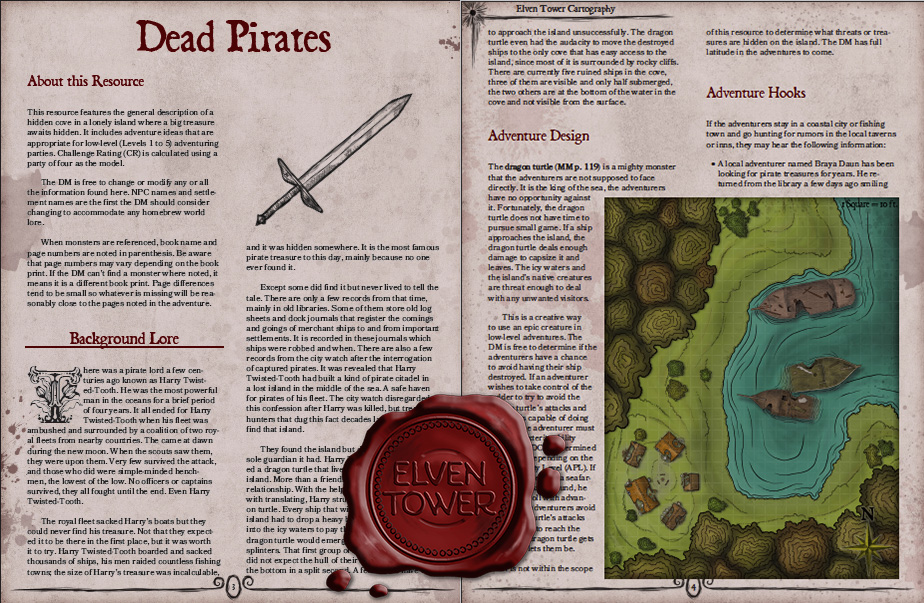 This resource features the general description of a hidden cove in a lonely island where a big treasure awaits hidden. It includes adventure ideas that are appropriate for low-level (Levels 1 to 5) adventuring parties. Challenge Rating (CR) is calculated using a party of four as the model.

There was a pirate lord a few centuries ago known as Harry Twisted-Tooth. He was the most powerful man in the oceans for a brief period of four years. It all ended for Harry Twisted-Tooth when his fleet was ambushed and surrounded by a coalition of two royal fleets from nearby countries. The came at dawn during the new moon. When the scouts saw them, they were upon them. Very few survived the attack, and those who did were simple-minded henchmen, the lowest of the low. No officers or captains survived, they all fought until the end. Even Harry Twisted-Tooth.

The royal fleet sacked Harry’s boats but they could never find his treasure. Not that they expected it to be there in the first place, but it was worth it to try. Harry Twisted-Tooth boarded and sacked thousands of ships, his men raided countless fishing towns; the size of Harry’s treasure was incalculable, and it was hidden somewhere. It is the most famous pirate treasure to this day, mainly because no one ever found it.

Except some did find it but never lived to tell the tale. There are only a few records from that time, mainly in old libraries. Some of them store old log sheets and dock journals that register the comings and goings of merchant ships to and from important settlements. It is recorded in these journals which ships were robbed and when. There are also a few records from the city watch after the interrogation of captured pirates. It was revealed that Harry Twisted-Tooth had built a kind of pirate citadel in a lost island in the middle of the sea. A safe haven for pirates of his fleet. The city watch disregarded this confession after Harry was killed, but treasure hunters that dug this fact decades later ventured to find that island.

They found the island but did not survive the sole guardian it had. Harry Twisted-Tooth befriended a dragon turtle that lived in a cave under the island. More than a friendship it was a business relationship. With the help of a wizard that helped with translating, Harry struck a deal with the dragon turtle. Every ship that wished to approach the island had to drop a heavy bag of gold or treasure into the icy waters to pay the toll. Otherwise, the dragon turtle would emerge and tear the ship to splinters. That first group of ambitious explorers did not expect the hull of their boat to collapse from the bottom in a split second. A few others have tried to approach the island unsuccessfully. The dragon turtle even had the audacity to move the destroyed ships to the only cove that has easy access to the island, since most of it is surrounded by rocky cliffs. There are currently five ruined ships in the cove, three of them are visible and only half submerged, the two others are at the bottom of the water in the cove and not visible from the surface.

It is not within the scope of this resource to determine what threats or treasures are hidden on the island. The DM has full latitude in the adventures to come.

If the adventurers stay in a coastal city or fishing town and go hunting for rumors in the local taverns or inns, they may hear the following information: