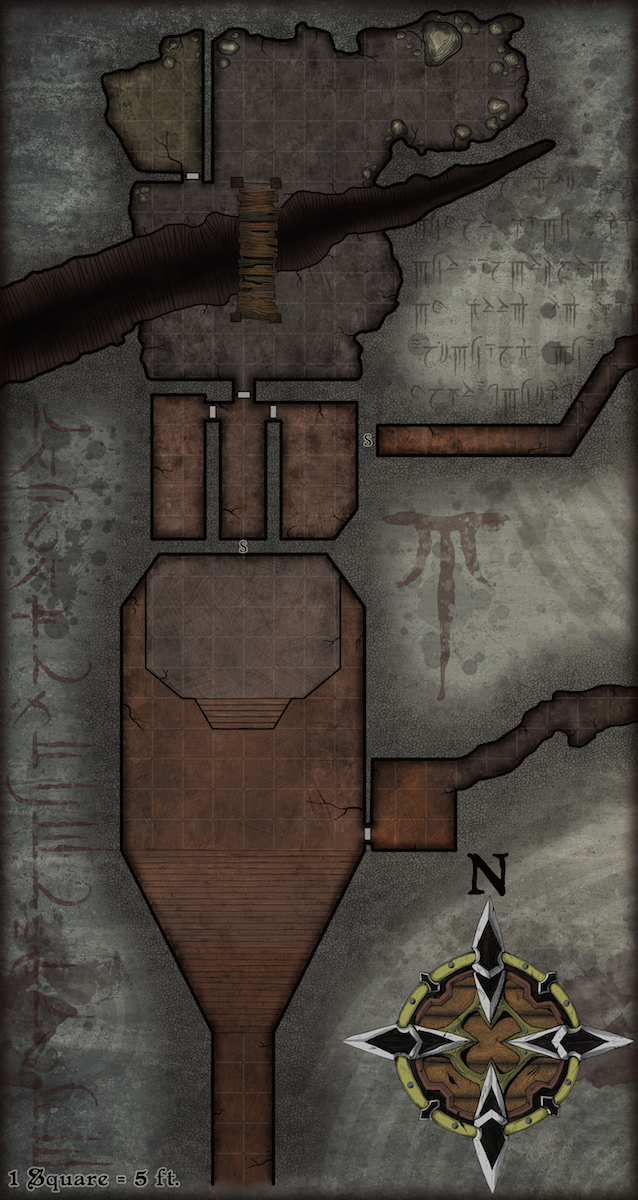 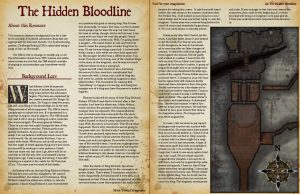 This resource features background lore for a low-level one-shot. It includes adventure ideas that are appropriate for low-level (Levels 1 to 5) adventuring parties. Challenge Rating (CR) is calculated using a party of four as the model.

What follows is the first person recount of events that occurred forty years before the adventure begins. The facts are explained by the castle’s steward Sir Fargo Garadan. Sir Fargo is sixty-five years old and, according to his knowledge, he is the only living witness of what happened. The DM is free to paraphrase or adjust this lore. It is presented in a way that is easy to read to players. The DM should not read it all in one go, having an active conversation is encouraged. The story goes as follows:

There is a secret that could change the fate of the kingdom if it were revealed. Please pardon my speedy invitation. As you can see, I am old and sickly. I do not believe I will have much more time in this world. No, do not make that face. I am at peace with death. When you are as old as me and feel the angel of death approaching more and more, you too will be waiting in calm patience. Death does not scare me, but once I go, there will be no one else to tell the tale. See, it all started almost forty years ago. I was young and strong. I was still training as a squire in the castle for Sir Donovan d’Leo. I Am sure you’ve heard of his deeds.

As history tells us, the late King Richard Aldoux VII had two sons and two daughters. He named his sons Aldair, the eldest, and Tommanou. King Richard raised his eldest son, Aldair, to rule the kingdom. I know King Richard is not remembered as a particularly good or strong king. But I knew him personally, he was a fine man, not the monster some people say he was. He may not have been the best at ruling, though, but he did his best. I can count with one hand the very few people I think could have done a better job. Well, I’m going down a tangent… He raised Aldair to rule and tried his best to make the young man a better king than he was. I’d say he was doing a good job. I trained with Aldair many a time while we were both apprentices. His younger brother was a different story. You know Tommanou for being one of the cruelest kings in the story of this kingdom, and he was not much different when he was a young lad.

I guess we will never know for sure, but being the second in line must be a complicated fact to reconcile with. I mean, you could be king but will never be, unless something happens to your elder brother. The incentives for causing that “something” to happen are too big, and being the younger son of a king you have the power to make it happen.

History books tell the story of how King Richard Aldoux VII fell ill and died in his bed after a few months. And how his eldest son, Aldair Aldoux, could not bear the pressure of becoming a king younger than he expected. The responsibilities and commitments that come with the title were too great for him that he abandoned his claim. He exiled himself to that far away continent to the east. Well, that story is horse-shit. That is not what happened. That’s why I feared the secret going to the grave with me. So that’s why I summoned you. I know from personal experience working with you and from other of your patrons that you are brave, just and courageous. If you wish to hear the rest of this terrible story, I need you to pledge your allegiance to this cause and commit to solving the problem. I know it is unfair to commit to a cause without knowing it, but please trust me. I would not have called on you if I did not think you were up to this task.

After the death of King Richard, the whole kingdom waited expectantly for the coronation of prince Aldair. That’s when Tommanou made his move. Apparently, he had planned it very well, it all happened so fast. Prince Aldair disappeared and the servants found a note that explained his lack of motivation for taking the crown. It said he would travel before the next moon to the eastern continent after the Yellow Sea. It all looked so out of place to me, I knew Aldair and he was scared but ready to rule the kingdom. Tommanou was crowned king before the next full moon and everybody forgot about it. No one cared about a cowardly prince.

It was years later that I found out the truth. A servant knew about it and wished to tell the truth. For that he was sent to the dungeons, he was to be beheaded to morning after on false charges of treason. I visited the cells that night and interrogated the servant. He felt guilty and wished to confess. I heard him. He told me that Prince Aldair had been kidnapped by his brother’s orders. A group of brigands brought him to an underground prison that was abandoned decades ago, north of the capital. Prince Aldair was imprisoned there. Tommanou is an evil man but he apparently still respects family laws and fears retribution from the gods. He did not want to be a kin-slayer so he only had his brother imprisoned. Tommanou hired a wizard to play a debilitating spell on Aldair. The spell erased Aldair’s memories and motivations. It destroyed him. I know this because I visited him several times over the years. He believes himself to be a poor hermit that lives in the forgotten prison. For long years he was there unguarded.

It is sad, I did not wish to put myself in danger only to point out a prince with no memories. So many years have passed that no one would believe it. I tried to find a cure but I did not find it. Only recently, a contact told me there might be a magical cure for his lost memories. A type of restoration spell that only accomplished priests can do. I do not know of such magic but I want to see every option tried out. Like I said, Prince Aldair was left unguarded for decades. I am sure he is still there, but now he is guarded by sellswords and guards. I have no clue if they know what they are guarding. I cannot go there anymore but you can. Prince Aldair is the rightful king. Yes, he is old, but he is a far better choice than our current excuse of a king. The kingdom needs peace and calm. If you manage to free him and restore his memories, this could be the beginning of a revolution that will bring our kingdom to its past glories. I trust you understand how important this situation is.