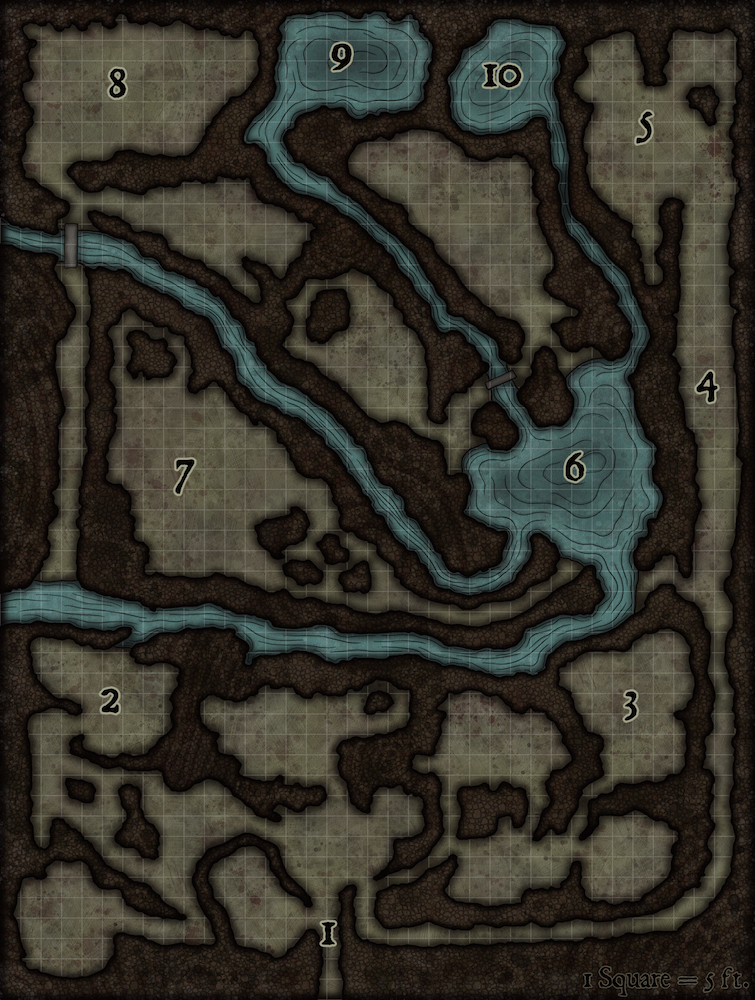 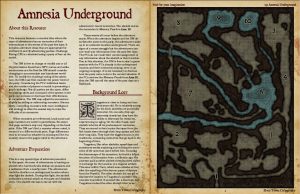 This resource features a one-shot idea where the team of adventurers has no memories of their whereabouts or the events of the past few days. It includes adventure ideas that are appropriate for mid-level (Level 8) adventuring parties. Challenge Rating (CR) is calculated using a party of four as the model.

This is a very special type of adventure/one-shot. In this quest, the team of adventurers is hunting an aboleth who had his thralls kidnap six peasants and a nobleman from a nearby town. The adventurers track the thralls to an underground location where they fight the aboleth. During this fight, the aboleth unleashes a mental attack on the party and disables them. The aboleth retreats to its lair with the adventurers’ recent memories. The aboleth stores the memories in Memory Pearls in Area 10.

These events all occur before the adventure starts. When the adventure begins and the DM describes the scene to the party, the adventurers wake up in an unknown location underground. There are signs of a recent struggle but the adventurers cannot recall any information from the past few days. The PCs do not recall their current assignment or any information about the aboleth or their location. Due to this situation, the DM is free to start a game session with the PCs already in the underground location and their memories missing, even in an ongoing campaign. It is not necessary to disclose how the party came to be in the current situation. If the PCs retrieve the Memory Pearls from Area10, then the DM can tell the story of the past days as a flashback.

Tsagottoa is close to being one hundred years old. He is relatively young for his kind; aboleths are practically immortal. On one side, they age extremely slowly but they have the ability to hibernate for centuries, experiencing no aging. On the other hand, each aboleth inherits all its predecessors’ memories. They are stored in their brains that span from the fish heads down through their long spines and into their long tails. They have the biggest brains in the multiverse, containing memories that go back to the beginning of time.

Tsagottoa, like other aboleths, spent days and sometimes weeks exploring and re-living the memories of the ones that came before him. Scouring the dreamscape of his ancestors, he found a forgotten piece of information from a millennia ago. His ancestor paid another aboleth three-hundred slaves in exchange for the location of a magical artifact. This was Lolth’s Tiara, which was considered lost after the expelling of the demon queen of spiders from the Feywild. The other aboleth did not get to disclose the location to Tsagottoa’s ancestor. His ancestor was killed. It seemed like a dead end, but Tsagottoa tracked the other aboleth’s lair to an underground cave system near some human settlements.

The other aboleth had died hundreds of years ago, apparently in a fight, but Tsagottoa found its remains. Whoever killed it did not know about the Memory Pearl in its brain. Tsagottoa extracted the pearl with his tentacles and absorbed the ancient aboleth’s memories. The tiara was in a drow village in the Underdark. The place was well guarded but the drow ignored that the tiara was there. It was in Lolth’s Temple, placed on Lolth’s effigy. No drow was aware of it being the original tiara. At least that was what the other aboleth knew hundreds of years ago. Things could have changed after such a long time. Tsagottoa had no time to waste. He did not have enough thralls and resources to attack a drow settlement. After some scouting done by his thralls, he found out that the drow settlement had grown into a small city. The temple still stood near its center.

Tsagottoa started abducting people from nearby settlements to turn into slime thralls. Once he has enough muscle, he will travel deep into the Underdark and attempt to do the same with the drow. A frontal attack is his last resort. Slowly taking over the settlement over the course of years is more convenient. He still will not venture into the Underdark without more thralls. The adventurers come to attack him in his makeshift lair half through this process. Tsagottoa steals their memories and retreats. He expects the PCs will be so disoriented that they will find an exit and never return.

The underground location is a natural cave complex half a mile under the surface. The aboleth uses the waterways to move around but it can also walk on land, but slowly. The adventurers originally arrived in small boats by the stream next to Area 2. After that, they tracked the aboleth to the tunnel marked as Area 1. The PCs fought the aboleth in a cave with a large pond and lost. The PCs come back to their senses in that cave (not on the map). The cave only has one exit, a tunnel that returns to Area 1. The DM is free to inform the players that their PCs are missing a few Hit Points and/or other resources like potions and spell slots. This is optional, as it increases the difficulty of the quest.

Tsagottoa has claimed this area as his lair. Because of this, all surfaces within one mile are slimy and wet. They are also considered difficult terrain. Additionally, all water sources in the lair are foul and undrinkable (Described in Regional Effects, page 14).

When the adventurers first visited this area they were not attacked. The natural caves here are rough. There are boulders, debris, and stalagmites all around. Two stalagmites are in fact adult Ropers (Monster Manual, page 261). They are undetectable thanks to their False Appearance features.

The party first arrived at this area, from the river. There are two improvised rafts on the floor. A successful DC14 Intelligence check lets a character have a vague flashback, a faint memory of building the rafts together. The DM is free to add any resources the party may have left back with the rafts.

These caves are the lair of four Carrion Crawlers (Monster Manual, page 37). These monsters are better fed than regular carrion crawlers from eating the aboleth’s thralls who are easy prey. They have twenty extra HP and the DC for their tentacle attacks 15.

A group of 6 Aboleth Thralls guards this tunnel. They guard the prison area in Area 5. Fifth edition removed the aboleth’s ability to create thralls. An aboleth can transform a humanoid into a mucous create that is forever its slave. There is no easy method for helping a thrall come back to normal. A Greater Restoration spell could work but it is up to the DM to determine that. There are no stat-blocks for thralls either. The DM is free to use the Guard (Monster Manual, page 347) or Berserker (Monster Manual, page 344) stat-block. Replace any weapon attack with a slam attack. They are not supposed to be particularly strong opponents, the real challenge is the fact that those are innocent people too, victims of the aboleth. PCs might balk at attacking them for this reason.

A group of people is in this area. They are all tied up behind their backs and sitting near the east wall. Eight of them wear peasant clothing, the other one is wearing finery. All of them look dirty. These people’s memories were also stolen by the aboleth and cannot give the PCs any pointers to their location. The people here are the ones that the party was sent to rescue, plus two additional farmers from a different settlement.

The bottom of this pool is the resting place of the other aboleth from Tsagottoa’s memories. The corpse is at the bottom of the pool, which is thirty feet deep. Closer inspection reveals that aboleth’s decay slowly over centuries. Their brains are particularly resilient to time. A successful DC 20 Wisdom (Nature) or DC 16 Intelligence (Arcana) check reveals that aboleths can access the memories of other aboleths by retrieving a pearl from the brain. The pearl is missing from the corpse’s brain.

This cave appears to be empty. There are three Cloakers (Monster Manual, page 41) hiding near the high roof of this chamber. Once the party reaches the middle of the chamber, the three of them glide down to attack and use their Phantasms ability to give the impression that there is a total of twelve cloakers.

This chamber is a kind of storage room. There are several mounds of personal effects and clothes that belonged to the aboleth thralls.

This chamber is only accessible by water. The adventurers have to use their rafts or come swimming. When they arrive Tsagottoa (Aboleth; Monster Manual, page 13) is expecting them. Tsagottoa is a level 5 spellcaster (Wizard). The DM is free to select the appropriate spells for this battle. Fireball is particularly good underwater, instead of a ball of fire, it works like a sphere of boiling water. Tsagottoa is not alone, ten of his Aboleth Thralls are with him.

This chamber features no solid ground to stand on. The pond here is fed by two springs of clear water that filter through the north wall. A faint glow comes from the bottom of this pool. The aboleth placed the party’s and the other prisoners’ memories in Memory Pearls. Memory Pearls are a type of magic item only made by aboleths. They use the gems to store their subjects’ important memories. The pearls are of little use to humans or other races, only an aboleth can access their contents. If a person grabs the pearl that stores their very own memories, then the memories are instantly recovered. That is the only case in which a person can interact with a pearl normally. Any pearl’s contents can be learned with the use of an Identify spell. It is up to the DM to determine what type of information is revealed because humanoid brains are not capable of holding the complete memories of an aboleth lineage.

In the case of this adventure, the Memory Pearl in Tsagottoa’s brain discloses the location of Lolth’s Tiara. It’s the seed for the next adventure.