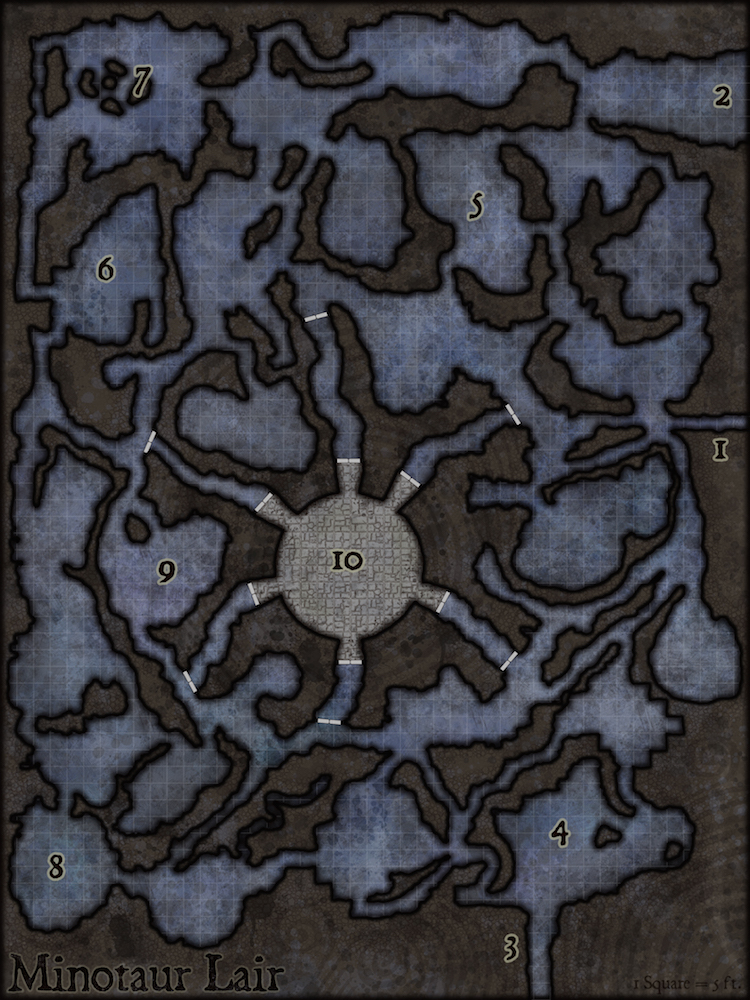 This resource features the general description of an underground lair where a minotaur lives. It includes adventure ideas that are appropriate for low-level (Level 4) adventuring parties. Challenge Rating (CR) is calculated using a party of four as the model.

The province of Arendelle, a beautiful place near the northern hills. Arendelle truly is a spark of light in the middle of the unforgiving land. Its people are humble, hardworking, amiable, and loving. At least in general. Visitors always tell stories about the good people of Arendelle. Tales of the portrait-like little towns that dot the landscape. Wooden houses with stone chimneys and tile roofs. Each town and city has its own landmark, a copper statue. The statue takes on the form of an animal or fey spirit the symbolizes the identity of each settlement. The different animals were assigned countless years ago by a sage and astronomer called Frabucheo. He is famous for pointing his looking glass to the sky and naming most stars and constellation. It’s after these constellations that the settlements in Arendelle are named.

The capital with the same name, Arendelle is a great city. Its symbol and landmark is a great copper statue of a bull. The animal appears to be about to tackle an invisible threat. People in Arendelle are happy and relaxed like the rest of the province’s settlers, but only in appearance. For the past five years, a terrible creature has threatened the well-being of Arendelle. From nobility to the peasantry, the evil horned demon is the worst fear of all.

It all started years ago when the proud king of Arendelle made a terrible mistake. The king of Arendelle was married to a foreign woman. She came from a faraway country whose customs are unknown to the province of Arendelle. The queen was possessive and jealous, despite that, the king spent many nights with courtesans and other ladies from the court. The king made a point to spend the night with a virgin lady at least once a week. The queen was mad but kept her face solemn before her husband’s affairs. All she cared for was for their young daughter to grow up and inherit her father’s position and station. The young princess was twelve years old when the king of Arendelle made an important announcement. A young courtesan, one of the king’s mistresses, had just recently given birth to a healthy baby boy. The king declared that he had signed an edict to legitimize the status of the bastard baby. He would be the royal heir to the throne.

That night the queen revealed her anger. Unknown to all, she was a weaver of magic. She sneaked through the castle at night. No one saw her enter the wet nurse’s chamber. The queen stood next to the crib, a sleeping baby right in front of her. The youngling was guiltless but she would use it to teach a lesson to the king. She pulled her magic wand and weaved a spell in the air next to the boy. The young baby was to be the king of Arendelle, whose symbol is a great copper bull. Who better to rule Arendelle than a hybrid creature? Half man, half bull, the true demented representative to the townsfolk of Arendelle. The spell ended and the prince opened his eyes. They were now the eyes of a bull.

Only the survivors of that night in the castle now the true horror and appearance of the monster. The minotaur prince killed guards, servants, and nobles equally. It then retreated downstairs to the crypts under the castle where it found the secret passages down to a cave complex deep in the earth. That was its new home. But the minotaur curse did not end there. Mirroring the king’s lascivious activities. The minotaur can only eat young virgin women. It expects one virgin women to voluntarily come down to its maze per month. If a woman does not come, then the worst aspect of the curse takes hold of the city: Five virgin women get out of their homes during the night and find their way down to the maze to be eaten by the monster. They do it as if hypnotized.

After cursing the young prince, the queen took her daughter and traveled back west. No one has seen her since. The king survived the minotaur attack on the castle and has no heir now. Because the monster was his son, he has not tried to have it killed. The king still believes that there is a way to revert the witch’s curse. After five years, seventy-three girls have died to the bull-man of Arendelle. Now the city is in trouble because no woman wishes to go voluntarily. In a week, the monster will claim five women.

This plot gives the old minotaur a spin and makes it a unique creature. It is up to the DM to determine whether the prince is now a minotaur, as described in the Monster Manual, or if this is an entirely new creature. Perhaps a copper construct in the form of a minotaur. This resource assumes the former is true and the minotaur is just like any other.

Since the city of Arendelle is a ticking time bomb, these are two suggestions for an adventure hook:

The minotaur prince lives in an underground cave complex below the castle. The trip from the castle crypts to the cave is about an hour long. Adventurers that come this way arrive through Area 1. The other two tunnels that exit the complex, Area 2 and Area 3 go deeper into the earth. These tunnels are uncharted. Some explorers believe that these tunnels eventually connect with the underground network of caves known as the Underdark.

Two Grell (Monster Manual, page 172) hide near the ceiling of this chamber. They attack the last adventurer to try to exit the place. If one of them manages to grapple a PC, they take flight and attempt to isolate their prey.

This cave appears to be empty. Under closer inspection, the adventurers discover the rotten bodies of three women in a narrow alcove. A successful DC 14 Wisdom (Medicine) check reveals that they have been dead for over a month. All of them died from wounds and cuts, they apparently bled to death in there.

Weeks before the drow arrived, a Hook Horror couple found their way to the cave. The two hook horror mated and built a nest here. The nest is made of rocks and splinters of certain types o fungi. There are three yellow eggs in the nest. A successful DC 16 Wisdom (Nature) check reveals several facts: that the eggs are a few days away from hatching; the proper way to care for them to hatch; the proper way to cook them for a good meal.

A small mountain of stuff lies near a great stone column in this chamber. There is all kind of things, most of them are female clothing, female jewelry, and other personal things. Near the bottom is an old set of noble clothing, fit for a prince.

The Minotaur (Monster Manual, page 223) awaits here. There are six sets of unlocked double doors that lead to this chamber. The minotaur is always active, but it half-sleeps between feeding periods. The floor is littered with bones of all its previous victims. Once all adventurers access this chamber, the minotaur attacks. It is up to the DM to either buff the minotaur or add more monsters depending on the level of taxation to the party after the other combat encounters.