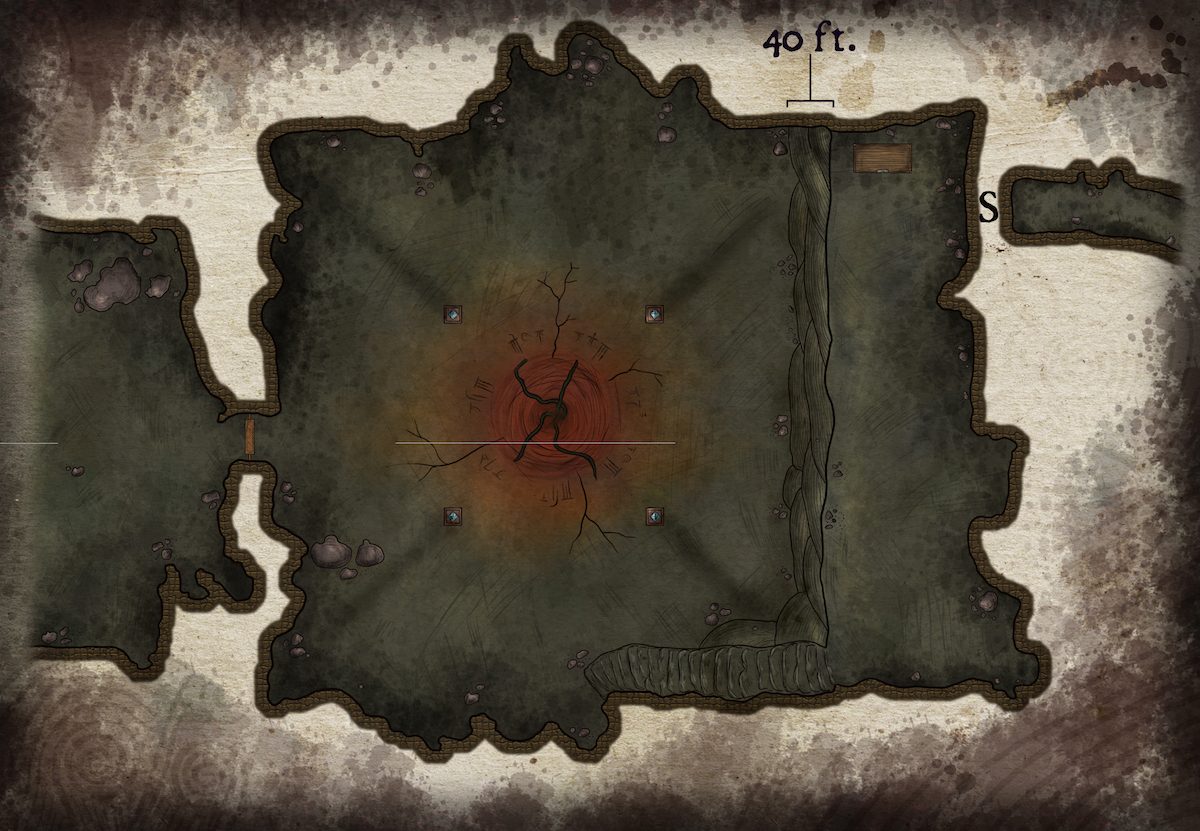 This adventure idea is appropriate for mid-level (5-8) parties. The heroic tier of play lends itself well for more serious situations. Here the fate of towns and whole populations rests on the shoulders of a few brave heroes. In this adventure the PCs will face a rip in the fabric of the world, a portal to the far realm. Unspeakable creatures crawl from the rift. Should the heroes fail to overcome them, hundreds of innocents would perish.

Feel free to change or modify any or all the information found here. NPC names and settlement names are the first you should consider changing to accommodate your homebrew world. To modify the challenge rating of the adventure, you must first consider the power level of your party. Taking into account PCs’ individual levels and number of players is crucial to presenting a good challenge. You may adjust the encounters slightly by adding or subtracting monsters. Alternatively, controlling monsters with intelligence and strategy is often the easiest way to raise the difficulty of a particular encounter.

Dianne was an accomplished mage; her own selfish nature made her always look for more ways to extend her arcane power. Her own story went back almost ten years. She was a young lonely child in the orphanage. The person in charge chose to ignore the clear signs that Dianne had arcane potential. If Dianne had had a different upbringing, she would have been sent to apprentice with a mage, to learn the craft of magic. But that never happened. Dianne knew she would never get any where growing up untrained in the orphanage. She escaped and lived on the streets. Living with street beggars and the homeless was not easy but it made her resourceful.

One day she overheard a conversation about a spellcaster in town. The man lived in a big house; he trained two pupils there in a big room next to a library. Dianne found her way inside, she found a warehouse attached to the house, it was next to the training room. The warehouse was full of things, but it was clear no one came often. Carefully and with patience, she carved a peephole in the wall. From then on, Dianne learned the craft of magic by looking at the lessons from behind the wall. From time to time that was not enough, every so often she had to infiltrate the library to read pages on the books or to “borrow” a book or scroll for a few days.

After two years, she was better than the mage’s pupils. She was a fast learner but her real fuel was her own search for more power. Some days she saw the mage reading an old tome alone, this book was not in the library, the old mage carried it with him all the time. Finally, one day in the dark of night the old mage decided to try the magic that was in the book. He drew a circle on the ground, it was adorned with runes and symbols unknown to Dianne. After that he sang a lengthy spell. As he uttered the incantation, the air above the circle began to shift and beat to an unheard rhythm. It changed color, taking a red purple tint. The air ripped apart and an opening formed above the circle, weird light came from beyond. A tentacle came forth from the other side, it touched the ground hesitating. A second tentacle appeared and grabbed the mage’s ankle. He sang louder in an effort to retake control of the spell, whatever his intentions were, things were getting out of hand. As the creature materialized in the room, the mage stopped singing and erased part of the circle with a swift move of his boot. The portal closed in a second, the parts of the creature that had passed through were laying on the ground, severed from their body, still twitching and moving. The mage sat down and poured a good amount of wine and started drinking, he was visibly shaken. He left to sleep that night and forgot the book behind.

Dianne took the tome. It was titled “Arsana Magika, on the summoning and binding of otherworldly entities”. The book was old but the content as unlike anything that Dianne had ever seen. This was potent magic, real arcane power inscribed in the pages of a book. The old mage could not handle the raw power of the incantations but Dianne felt herself capable enough to do it. The book described spells for summoning entities and opening rifts to a place simply referred to as the “Far Realm”. No accurate description was given for the place, she understood that the Far Realm was a location outside of the universe, a different strange universe in itself.

She left the city and went to a cave complex she knew from her time in the streets. Bands of thieves and lowly folks hid there. With a few fire and illusion spells she scared away the few people hiding that day. She knew the summoning spell she was going to try. The book had a list of names of strong entities in the Far Realm and the particular sigils to draw on the floor to call them forth. She had heard stories of spellcasters who drew their powers from extra planar entities. This was her shot at striking a deal with one such being, instantly setting herself apart from everyone around her. She would summon the entity called “Atropposu”.

She memorized the incantation and crafted the circle on the cave floor. Once everything was ready, she started the spell. Air and energy flowed from her finger tips to the magic circle. The air started vibrating and shifting in color above the circle. Everything was working properly. The air ripped apart and the light from a different dimension poured inside the cave. Tentacles came from the rift, four of them, but Dianne was good enough to keep them in line. A thicker tentacle passed through the portal, this one had a claw at the end and three yellow bloodshot eyes set on it. The eyes looked at her, the gaze was hypnotic and intense. She heard a voice in her head. The telepathic link was too strong a force to withstand, hundreds of voices rang inside her head at the same time, they spoke all different languages and dialects. It was impossible to make sense of any of it.

After a few seconds it all cleared up and a single low pitched voice spoke to her. It asked her name and she answered. It then asked her reason to summon it. She said she wanted power, power beyond belief. The eyes in the tentacle looked at her puzzled before she heard the voice ask how she intended to do that. She smiled and started singing the binding ritual. The tentacles moved erratically as the spell took over them, binding them to Dianne’s will.

After a minute the tentacles were still and docile and Dianne was satisfied. But she did not feel more powerful. Had anything gone wrong? The voice in her head then spoke. It called her a naïve fool and said: “Do you know who wrote that book? It was not a human who mastered the binding spells therein, otherwise we would all be slaves to puny humans. It was one of us, we wrote that book and others like it to fool idiots like you into bringing us to the material world. It is humankind’s desire for more power that makes this so easy, and know you have caused it again.”

Dianne stood still for a second. She remembered the old mage, how his visage changed from calm to distress in a moment. Maybe he had heard a similar thing from the entity he was summoning. He stopped singing and erased part of the circle to abort the spell, she had judged him weak for that but maybe he was quite wiser.
Dianne moved quick to erase the circle but three tentacles caught her before doing that. She was restrained. The voice then said: “You want more power is that it? I will use your material body to infuse my energy in your world. My children will come and plague your world and through me, you will get the power you want.”

Attroposu took over Dianne’s body and grew itself within her, her body expanded to take him in, turning into an abomination unseen in the material world. She stopped being Dianne, though her essence and spirit is still hidden inside, fighting to be free. Abominations and aberrations came from the portal and have started attacking the nearby settlements.

While the adventurers are in the city, they are commissioned to investigate the disappearance of some farmers in the outskirts of the city. When they arrive they find strange tracks that appear to come from a giant crab or insect. Following those tracks to a nearby cave, they are attacked by 4 Chuul (Monster Manual p.40) The farmers are found dead in a corner of the cave.

After defeating the aberrations at the city gate. The adventurers will have to follow the monsters’ tracks. They will lead them to the cave where Dianne summoned Attroposu. Aberrations await them in the main cave chamber where the portal is wide open. This is a two phase encounter, the adventurers will face a group of aberrations while a second group arrives from the Far Realms.

After dealing with the aberrations, closing the portal requires a ritual depicted in the old tome Dianne used. The tome is on the ground, next to the portal. The ritual takes 5 minutes to perform and can be done by any full spellcaster class.

Note. The encounter as written does not feature Dianne/Attroposu. Depending on the power level of your party, you might choose to include her/them in the last fight. It should be a difficult and memorable encounter. Otherwise, you can leave this particular threat for a future quest. Attroposu would want to reopen the rift or attack the party directly for interfering with his invasion plans. It is up to you as the director of your world to choose how to implement this extra-planar threat. 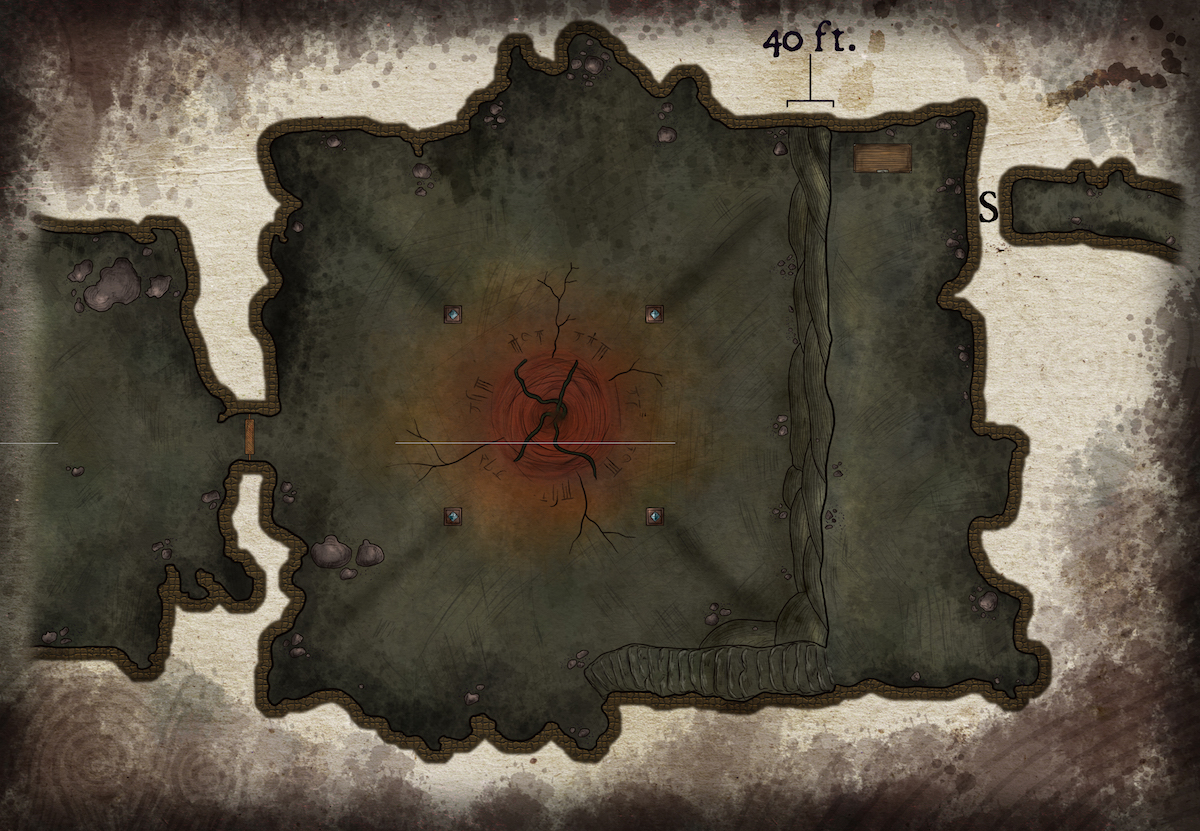