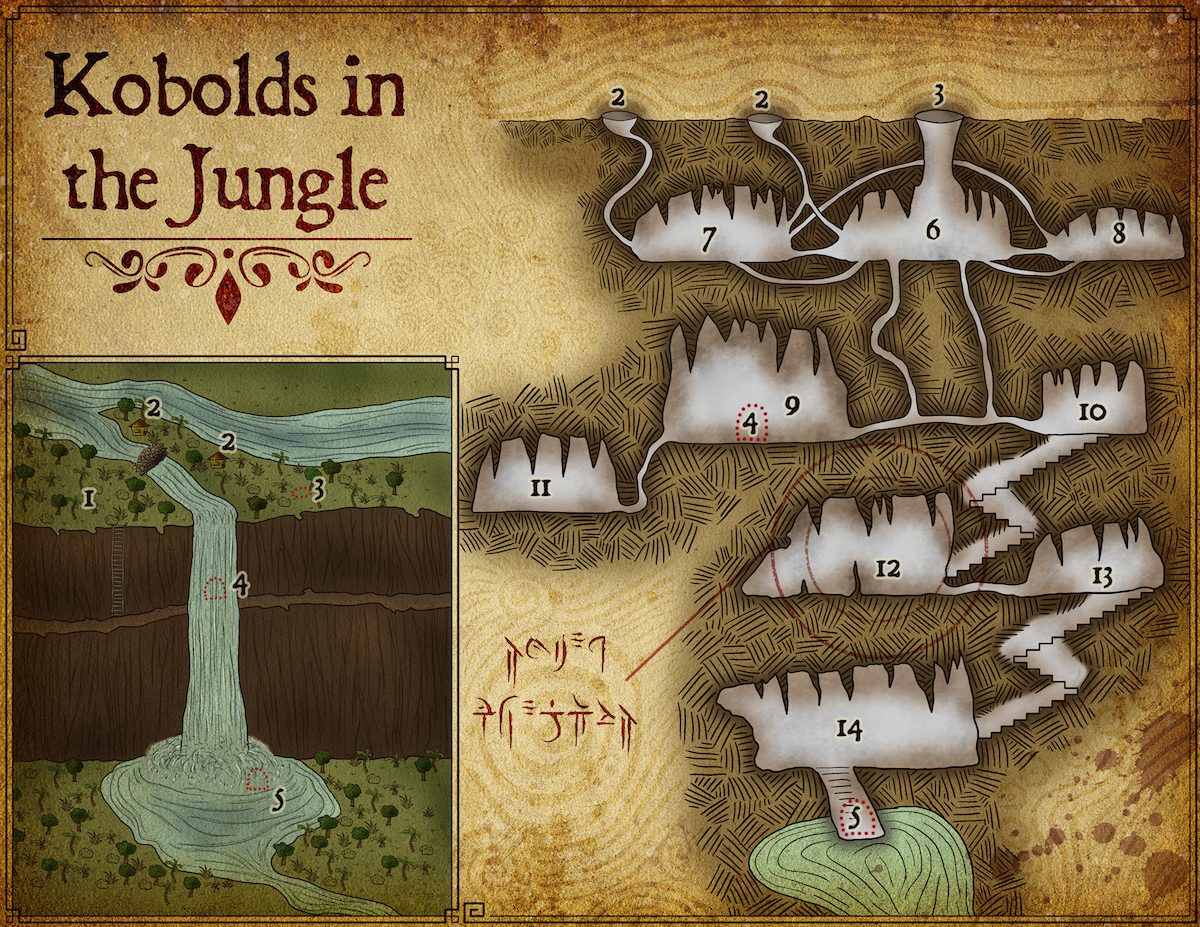 This short adventure is appropriate for low level (2-4) adventuring parties. The challenge rating is calculated using a party of four as the model.

Feel free to change or modify any or all the information found here. NPC names and settlement names are the first you should consider changing to accommodate your homebrew world. To modify the challenge rating of the adventure, you must first consider the power level of your party. Taking into account PCs’ individual levels and the number of players is crucial to presenting a good challenge. You may adjust the encounters slightly by adding or subtracting monsters. Alternatively, controlling monsters with intelligence and strategy is often the easiest way to raise the difficulty of a particular encounter.

Turk’Hal is a kobold mage who recently built a lair in a cliff side behind a waterfall. The place is surrounded by jungle; getting to the lair is difficult by itself, but the kobolds are small and have an easier time moving around. Turk’Hal is not alone, his pack all believe he has draconic heritage because of his arcane prowess, thus they follow all his commands. Turk’Hal’s lackeys are attacking travelers, caravans and even nearby settlements to steal their valuables and gold. Turk’Hal is particularly interested in magical items. Since they are often of great quality and his followers can’t detect them, they are instructed to bring back to him anything that looks valuable to him to identify.

If your adventuring party is traveling on their own business through the jungle, a great way to start this quest is by ambushing them with kobolds. Fallik is a fat kobold waiting to ambush the party, he reports directly to Turk’Hal. Roll the kobolds’ Stealth check with Advantage because of their camouflage paint and compare it with the party’s Passive Wisdom (Perception) scores to determine whether any or all of the adventurers are surprised or not. 2 Winged Kobold (MM p. 195) and 2d4 Kobold (MM p.195) attack the party.

Use the Kobold stat block for Fallik, with two exceptions, he has double Hit Points and AC 15. Fallik has a strong sense of self-preservation, he will be the first to flee if things go south.

If the adventurers are defeated, they are captured and brought to Area 11 for further interrogation from Turk’Hal (unlikely). If the party wins the engagement, they have two options, either they continue traveling or they decide to track any fleeing kobolds back to their lair. If you wish to nudge the party in that direction, you could have a fleeing kobold steal something from a PC, forcing the pursuit. If the party leaves anyway, they reach a small settlement at nightfall. Here’s the last chance to hook the adventurers, a merchant from the previous caravan was ambushed by the same kobolds with worse luck. They left their belongings and wares for the kobolds to take. This merchant appears to be a wealthy man, he offers the strong looking adventurers a grand reward in gold and spices if they go back to recover his stuff. He even mentions that the kobolds must have a lot of stolen goods for them to take, recover or sell. The merchant only cares for his own boxes of spices.

Tracking the kobolds back to the waterfall is not easy in the jungle. Any character trying to do that must succeed on a DC16 Wisdom (Survival) check. A success allows the party to reach Area 1 unimpeded. Failure lets them reach Area 1 too but with an additional complication. Possible complications:
1. They might encounter a wild hungry beast.
2. A kobold scout sees them and sends a signal singing like a bird. Any character with a Passive Wisdom (Survival) score of 14 notices that the bird noises are just impressions.
3. The tracker leads the group through the difficult ground and 1d4 of them have now one level of exhaustion.

The adventurers follow the kobolds’ tracks following a stream that splits in two. One of the streams goes down a cliff forming a waterfall. There is a rough bridge built with stones that cross the stream. On the west side of the cliff, there is a rope ladder that descends from the top of the cliff to a ledge 40 ft. below.

Right between the two streams, the kobolds built two crude shacks. The shacks are used as temporary storage rooms and as sentry posts. Two Kobolds are in each shack at any given time, they are not paying much attention because no one has ever attacked them before. A Tiger hides near one of the shacks, he is not tame but likes the kobolds because they feed him often.

Both shacks feature a hidden trapdoor that goes down to the lair. Any character with a Passive Wisdom (Perception) score of 13 notices the door hidden under a carpet of hay. The tunnel on the shack closest to the stream split leads down to Area 7. The tunnel on the second shack splits and reaches Area 7 and Area 6.

This is the main entrance to the lair. The hole is covered with vegetation. If one or more characters weighing 100 lbs. or more step on the pit, the vegetation cover breaks and they fall. Any character with a Passive Wisdom (Perception) score of 14 notices the artificial layout of the fallen vegetation, hinting at a secret underneath. If removed, a rope ladder descends safely to Area6. Any falling PCs may roll a DC 13 Dexterity Saving throw. Success allows them to stay hanging from the edge of the hole. Failure means the PC falls all the way down to Area 6, taking 10 (3d6) bludgeoning damage from the 30 ft. fall.

Climbing down the rope ladder to the ledge allows the party to move horizontally on the cliff face and behind the waterfall. The ledge is narrow enough that Medium characters must squeeze to stay on it. There is a hidden entrance behind the waterfall that leads to Area 9.

1d6 Flying Kobolds patrol the ledge. They attack on sight. Anytime a Medium or larger character takes damage, he must roll a DC10 Dexterity Saving throw to avoid falling down to the jungle. The fall deals 18 (6d6) bludgeoning damage (60 ft.), any character falling on the small pond takes half damage from a fall.

The pond that forms where the waterfall touches the ground is 20 ft. deep. The jungle around the pond is overgrown. There is a submerged cave that leads to Area 5. This entrance is not visible from the surface, only by diving is the entrance revealed.

The common room is a tall chamber with several narrow tunnels going out from it to other areas. The place is usually occupied by non-fighting females and young kobolds. At any given time 1d6 Kobolds are found here. When under attack, the non-fighting members of the pack try to flee to Area 13.

This chamber connects with the northernmost shack. It is used to store stolen goods and weapons. Most weapons here are human sized and too big for the kobolds to wield. If the characters are here searching a thing stolen from them there is a 30% probability it is here. If the characters are trying to retrieve the merchant’s goods, only half of them are here, the rest are in Area 12.

Kobolds prefer to eat meat but they are omnivore. This room is used to keep grain, meats, fish, fungi and other edible materials. 2d8 non fighting kobolds are here.

This large chamber is very humid. Water from the waterfall flies in through the entrance in Area 4 and makes the air wet. The kobolds take advantage of this situation and use the chamber to plant edible fungi. There is fungus all over the ground and walls. 3 Kobolds and 2 Myconid Adults guard this place. The myconids appeared/grew from the fungi plantations naturally. They work alongside the kobolds as long as they are able to tend the fungi.

This cave serves as sleeping quarters for most kobolds in the pack. There are sleeping pads and bags all around the room. 3d10 non-fighting kobolds are here at any given time. They surrender if threatened.

This chamber features three wooden bar cells. The kobolds built the cells to hold any prisoner worth ransoming. Each cell door has a crude lock. Any character trying to pick a lock must succeed on a DC 12 Dexterity (Thieves’ Tools) check to open it. If the party is defeated at any point during this adventure, they are taken to one of the cells to await interrogation.

There is currently a prisoner in one of the cells in this area. He is a human in dirty fine clothes. His name is Darius and he is a shipwright. He appreciates any help escaping from the kobolds. Darius will try to persuade the party to go find his blueprint book, the kobolds stole it from him.

This is where Turk’Hal lives. The place features a squat stone throne where he likes to be when giving orders. Turk’Hal is an accomplished Mage, he knows his lackeys are no match for strong adventurers, but he trusts his fire to be able to deal with any of them. He is accompanied by 2d4 Kobolds and 1 HobGoblin bodyguard.

While Turk’Hal trusts his magic, he will try to negotiate first. He is willing to offer a good amount of gold and maybe a minor magic item if the adventurers leave and never return. Should the negotiation fail, he will attack them with his fire mafic. Should Turk’Hal die or become incapacitated, the rest of the kobolds are demoralized and flee the lair as soon as possible.

There is a big fireplace in the middle of this room. There are 28 kobold eggs set in concentric circles around the fire. This is the future of the pack. If things look sour for the fighting kobolds or if Turk’Hal is defeated, the non-fighting females will come here and take the eggs. They will then try to exit the lair from the surface or by going down to Area 5 and swim out of the place.

This room is mostly empty. There are a few handmade nets and some other fishing equipment in the room. The kobolds use the underwater entrance to fish in the pond. This is not their greatest skill but some of them have a knack for it. Their equipment is here. There is a 40% chance that 1d6 fisher kobolds return through Area 5 every 20 minutes. 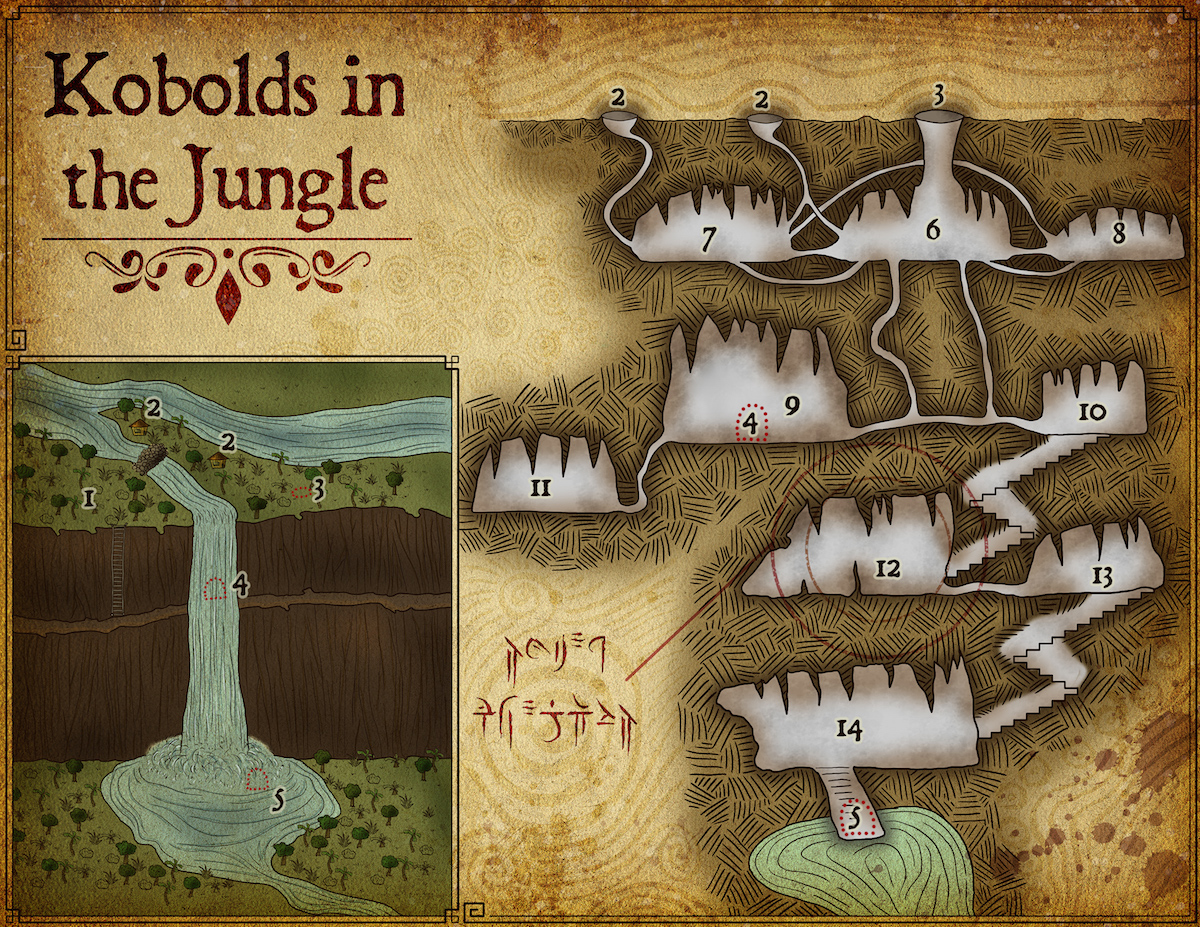