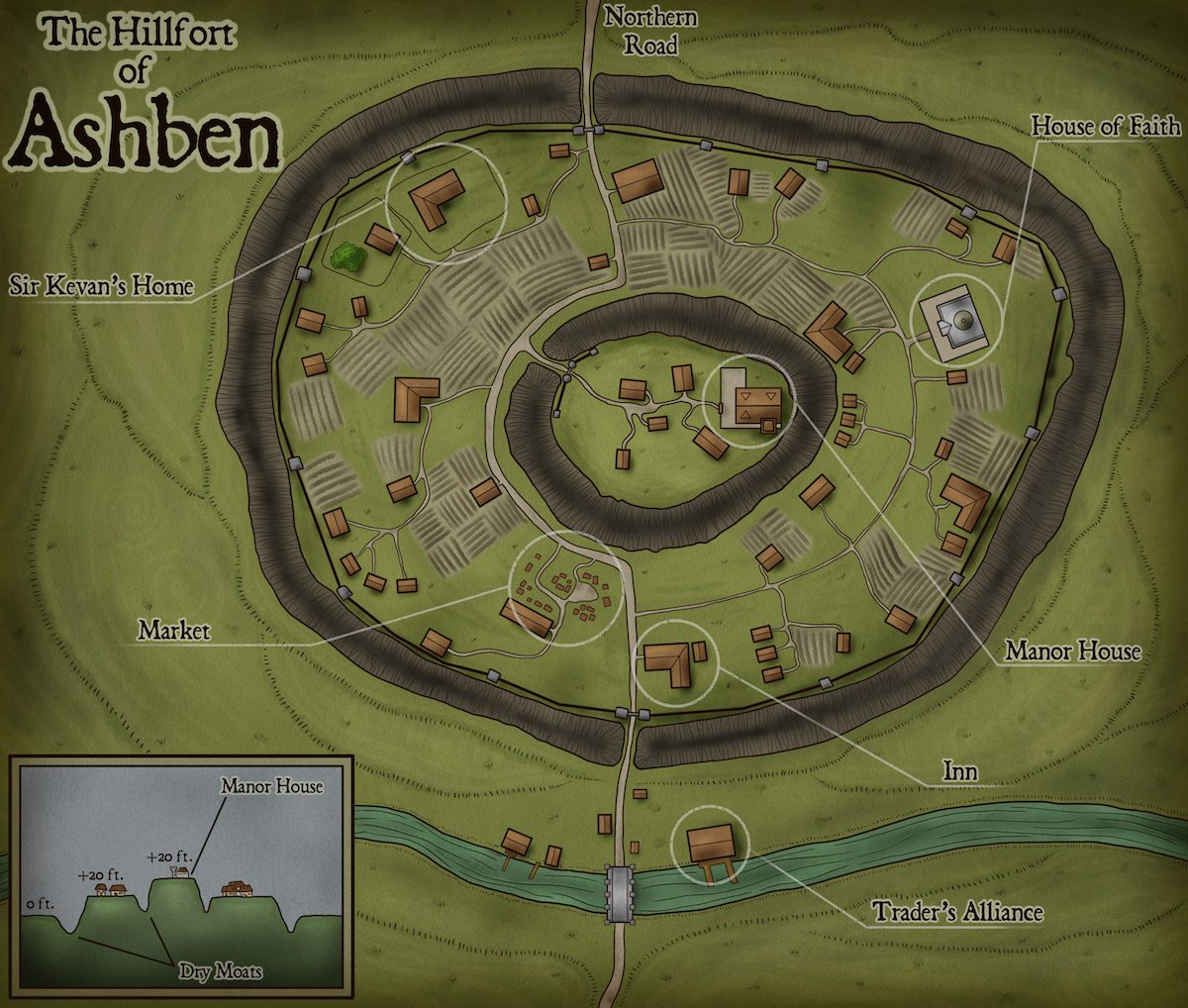 Surrounded by hills and farms, the fortified settlement known as the Hillfort of Ashben is a bastion of trade. The common folk call it Ashben colloquially. Most of the villagers in Ashben are farmers or herders, the town depends on outside traders and merchants to acquire other goods.

Ashben is strategically located in a place of transit, on the top of a great hill. Decades ago Ashben was a properly manned fort. An outer dry moat surrounds the town, the original builders dug the moat to counter siege weapons and cavalry, only two narrow bridges connect the moat to the main town level, which is twenty feet higher than the exterior. Right after the inner side of the exterior moat there is a wall, squat towers built every so often all around town. The town proper features over thirty buildings and the great house of faith.

The center of Ashben is another elevated patch of land, it is also surrounded by a dry moat. The center is connected to the town by a single narrow bridge with its own gate. Inside the inner circle is the manor house, the granary, the wine deposit and some houses. The manor house is currently occupied by Baron Rams d’Lao, he and his family have lived in Ashben for the last six years. Baron d’Lao is a just lord. He has a good reputation in the realm. Everybody knows he is a strong and capable soldier. He was appointed to oversee the reconstruction of Ashben, after it had been abandoned and neglected for almost a decade. Hid oldest son and heir Lorenz d’Lao came of age recently. Unlike his father, Lorenz is impatient. He is already a great swordsman with dreams of greatness.

The market is in the southern part of town, in the outer circle. Merchant stalls are set there permanently, the market opens every day as merchants and traders come from north and south of the Northern Road. They peddle their goods for other merchants and the settlers of Ashben to buy.

Other than Baron d’Lao and his immediate family, the only other noble in town is Sir Kevan Aranadi. He is an old man who lives in a large property in the north. Sir Kevan’s reputation as an impressive swordsman precedes him. Stories, songs and rhymes about his achievements are often part of bards’ repertoires. He is old and spends his time caring for his crops and plants. Twice a week he trains the baron’s son, Lorenz. Adventurers and would-be heroes come from time to time seeking counsel and training from the old war master. Sir Kevan refuses all, he holds no love for violence anymore. He trains Lorenz out of courtesy to the baron. Out of practice, old and unmotivated, Sir Kevan is still one of the best swordsmen in the realm.

Close to the south gate, there is a big building that serves as the only inn in town. It does not have a name. The owner and innkeeper is Bartholomew Sagast, he is a rough man, middle aged and burly. He is not a man of many words, most people already know not to try to engage him much. He has however a topic that he loves to discuss, it is the proper way to ferment and care for grapefruit to brew a good wine. Bartholomew used to be a brewer for years before the winery burned down to the ground and he lost everything. 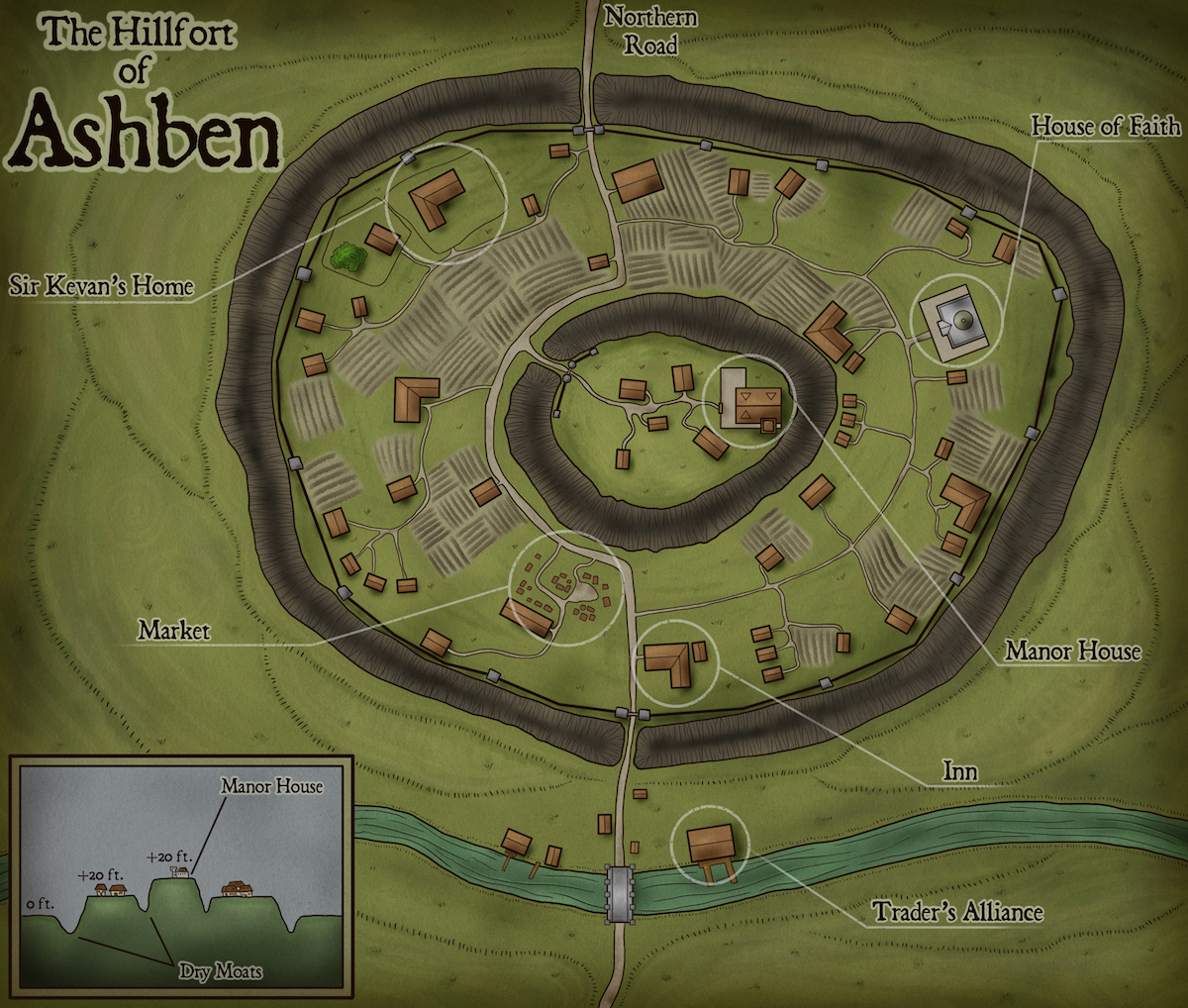