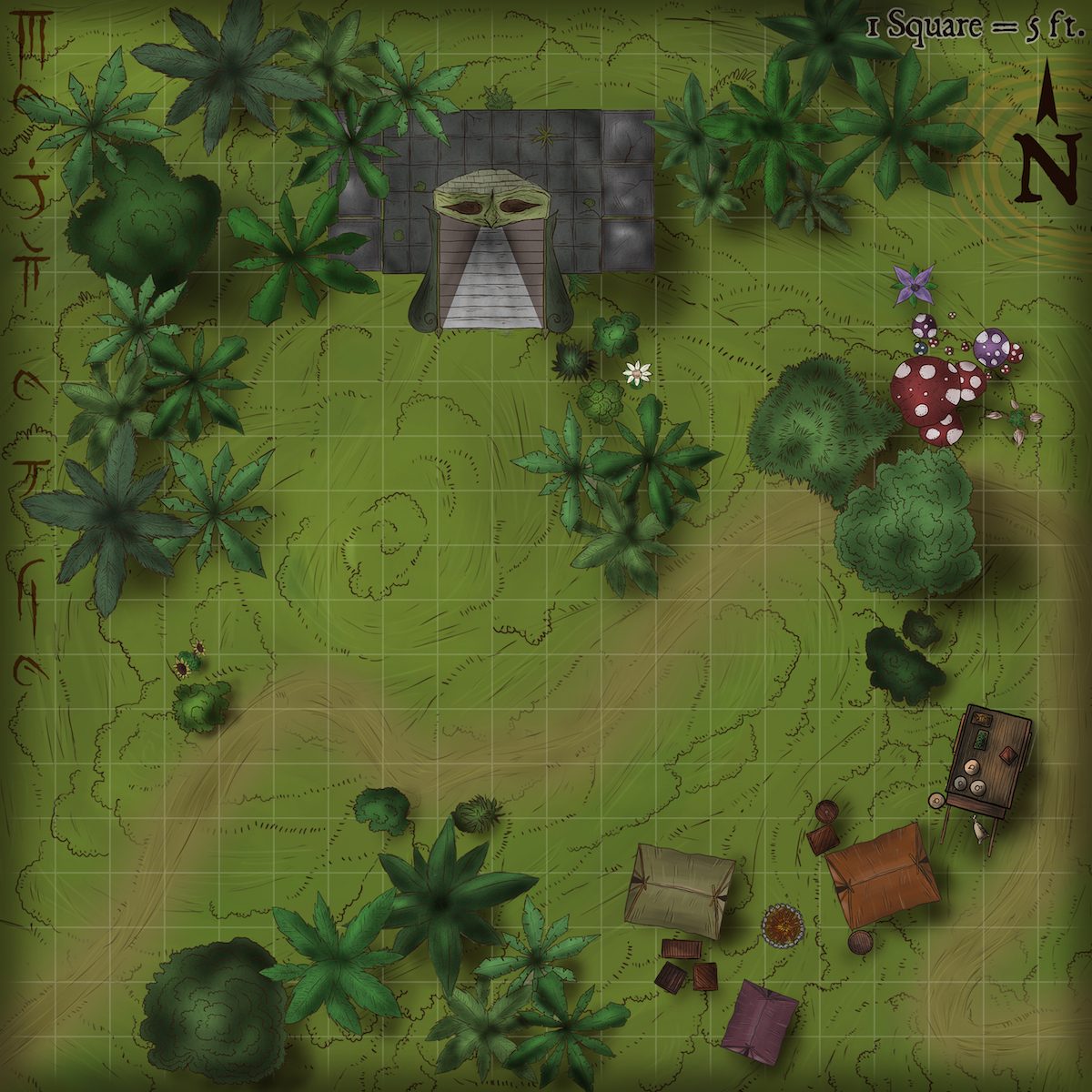 This adventure idea is appropriate for a jungle themed game (provided you use the illustration included). The adventure, as described, is aimed for a low level party (2-4), cues on how to adjust the difficulty are at the end.

Deep in the jungle, a week away from the nearest settlement, lies the entrance to Taminna. No one really knows who or what were the original settlers of Taminna. The ruined city under the jungle is vast and barely explored. There are other entrances farther away, but none have dared travel so far to explore them since the jungle is dangerous by itself.

The passageways of Taminna are carved from the rock itself, that is not to say the tunnels were rough. On the contrary, bas-reliefs and runes decorate most walls and sometimes even the floors. The languages have not yet been deciphered, not much information is available. Scholars seldom visit the Ruins of Taminna because they are plagued with underground terrors. Sages suspect that the underground complex is home to many of them, but the also think that the tunnels go deeper than most believe, and connect the surface to the underdark. Thus explaining the presence of such monsters.

While the place is not so hot among scholars, it has a newfound reputation as a place of quick riches and wealth. Adventurers now travel often the weeklong trip to the entrance just to have a chance to go down and try their luck. The taminnans left behind uncountable treasures. They were specially skillful working with glass and precious stones like onyx and obsidian. Treasure seekers often bring back delicate statuettes, necklaces, rings and even suits of armor made of such stones.

Once you enter Taminna, the path branches out in many directions. The underground complex is really big and it goes down too, there are at least 8 levels found. The chambers and places closest to the entrance have all been sacked by adventurers. It gets more difficult every time because explorers have to go deeper and for longer trips in order to make the expedition worthwhile. This is where Joffrey Goldentooth comes in. He is an adventurer who brought back tons of valuables from Taminna, but he now thinks it is too risky to continue going down. He decided to set up camp outside of the entrance. He and his small group of brigands run a shady operation there.

What they do depends on who comes along to explore the ruins, and there are lots of people who come this way. If people show up with the intention of finding treasures, Joffrey Goldentooth and his gang offer them trading goods, food and a place to camp for a reasonable sum of gold. If Joffrey Goldentooth gauges the would-be explorers to be too weak to actually make it back from the ruins, he and his men slaughter them during the night and take their stuff. If the explorers look strong enough then Joffrey Goldentooth let’s them go down, expecting them to return with valuable stuff.

Joffrey Goldentooth and his men have been burying the dead close to Taminna’s entrance. The place now features several giant fungi of many colors.

You can adjust the difficulty of the encounter slightly by adding or removing Bandits. For higher level parties (5-7) you can use the Assassin stat block for Joffrey Goldentooth. Use an assortment of Berserkers and Thugs for the rest of the bandits. Additionally, you can opt to boost the bandits by adding a Mage or Druid. 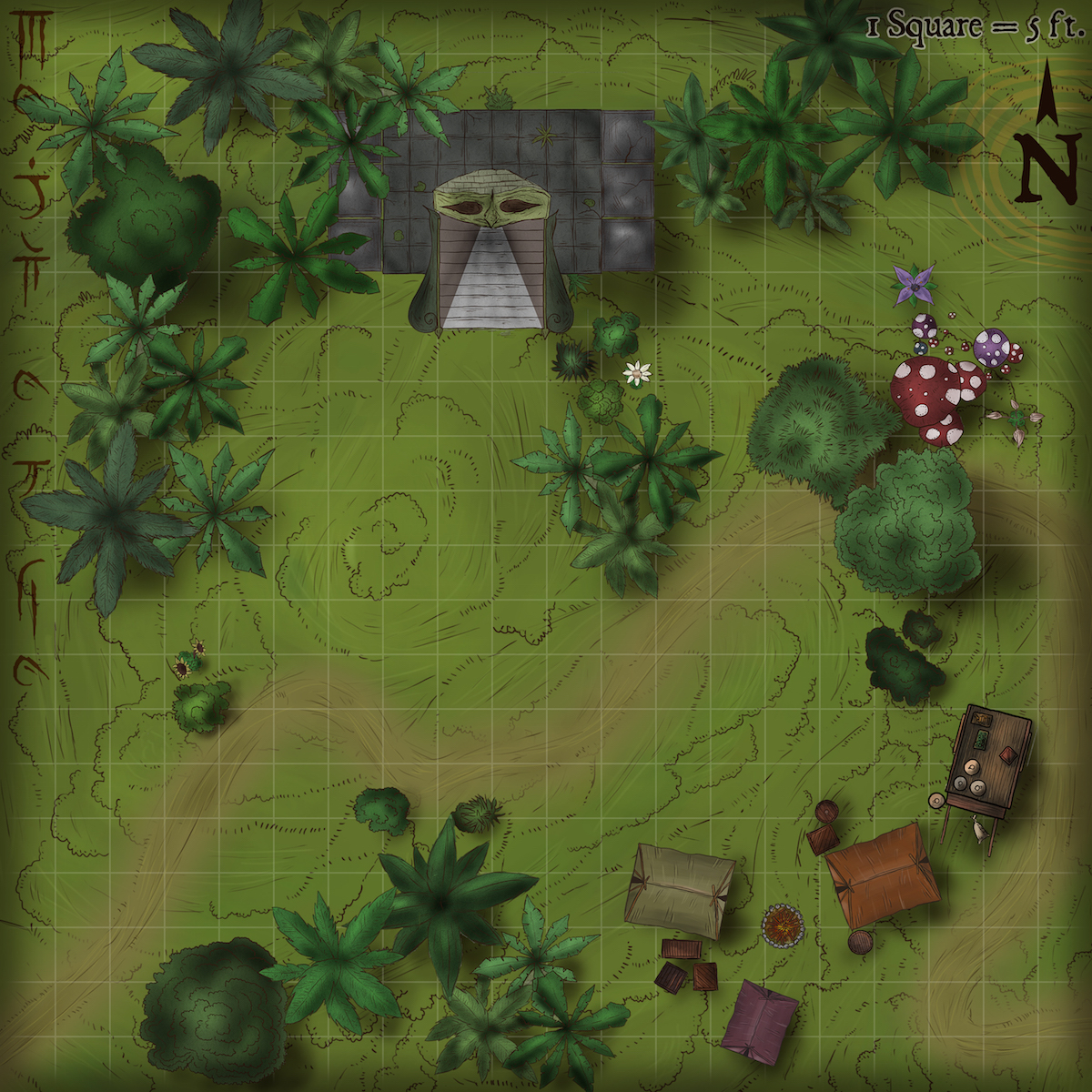