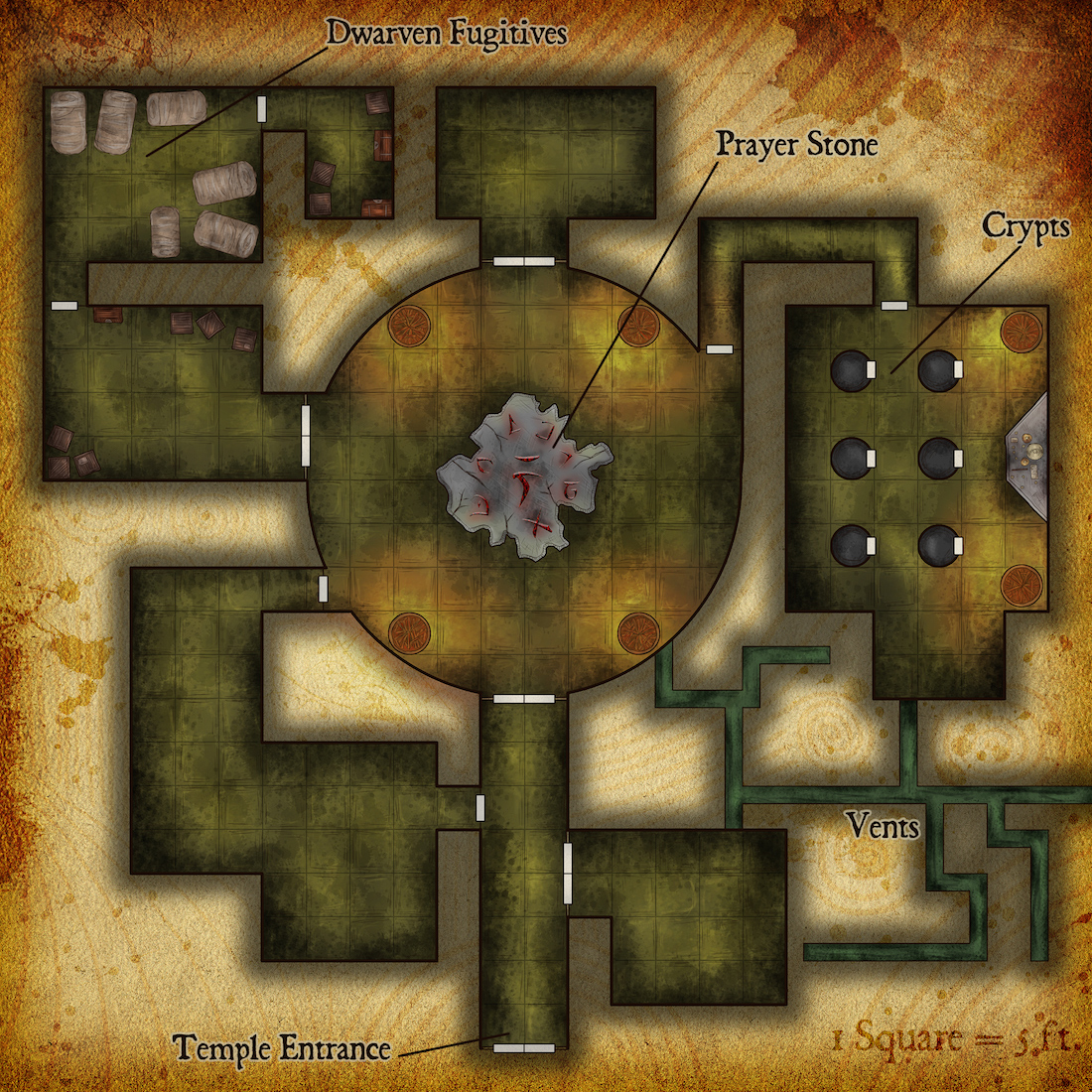 What follows is a story about a dwarf smuggler and how he came to be hiding in an underground temple from the city watch. The intention of this article is to serve as inspiration for other DMs and players alike. Please feel free to take what you need and modify the information below to better serve your game.

Tivak Mellowbeard is a feared dwarf. His criminal life smuggling illegal articles and substances made him a tough merciless person. He started low, carrying boxes and sacks in the docks. Tivak grew up an urchin in the big city, life is not easy when there’s no place to stay. No work meant no food. Driven by need he started a life of crime, it comes easy when you are at the bottom and there is not much to lose. But Tivak was not a simple criminal, he had vision. He was good with people and better with money.

Tivak stole things, sold others, killed on contracts, sabotaged projects but his real love was smuggling. There was something interesting about it, and it was not even about the goods he transported, sometimes he transported “normal” stuff like silks, spices and fine leathers. But some settlements had ridiculous regulations for traders. Some of them charged a percentage of the value of the goods just for the right to sell it behind the city walls. Others had arrangements with trading houses so that they were the only ones allowed to sell a particular item, in that case, a trader would be forced to sell the merchandise at a discounted price to the trading house at a loss. Making trade of a particular thing unprofitable. If a person managed to smuggle something inside the city then it was fair game for trade. Even if it had to be sold in the black markets it was a profitable venture. Tivak often did not own the goods, he was just the man in the middle. He’d smuggle the items and then charge the merchant a fraction of the taxes he would have paid to the city. Both parties profited from this.

Tivak’s most recent deal proved to harder than expected. A merchant of fine goods called Lord Duvan d’Avenio hired him to smuggle a shipment of perfumes inside the city. Items like these were taxed dearly by the city watch. Tivak had done it before. He decided to load the perfume wooden boxes on a horse-drawn cart and surround them with hay bales. There were many carts needed for this. Tivak and his men dressed as farmers and went to the city gates. Half the loaded carts passed the guard’s inspection when trouble arose. All of them heard the sound of a horse crying in panic. Turning to the end of the cart line Tivak saw a young man riding a horse, the boy was clearly inexperienced, the horse was out of control and the boy pulled the reigns in panic. He crashed straight into the last cart. A few hay bales fell from the cart, the perfume loaded boxes stayed in their place but the force of the crash broke a few vials of perfume inside one box. The cart was covered in the fine smell of foreign flowers and a tint of cinnamon. Tivak motioned to his man to get out of there immediately but the guard was upon him in a second. Not because of him initially, they went to see what had happened with the young rider, who was on the ground in pain but not severely hurt. When they noticed the smell the ruse was off and the guards called for reinforcements with their horns. Tivak fled the scene with some of his men, the others closer to the crash were arrested.

Tivak saw himself and his men trapped momentarily inside the city. He knew of a place to hide, and old dwarven temple, built as a place of worship to the smith of the world, Moradin. The temple was underground, as it should be for a dwarven place of prayer, not many knew the location of the temple. But even if they knew, the place was abandoned. No one would dare defile the temple to look for some dwarven fugitives. They set an improvised camp inside and waited. They have stayed there for days, afraid to go back to the surface and face the city watch, their plan is to wait out a few weeks and then leave one by one to avoid notice. One of them comes out at night from time to time to get food and information.

An informer saw one of Tivak’s men during one of his night forays. This is how the captain of the city watch found out their location. The city folk are very respectful to temples and faiths, the captain believes that a direct intrusion into Moradin’s Temple will be seen badly, he would rather avoid smearing the city watch’s name for lowly fugitives. It would not be the first time the captain hired a bunch of mercenary would-be’s to do the dirty work. Someone had to do it anyway and gold always flow in the same direction.

As described, this short quest is aimed for low level parties. Tivak (Bandit Captain) is accompanied by 6 dwarves (Bandit). You can easily increase the challenge by using stronger archetypes for Tivak an his men, like Assassin for Tivak.

Additionally, Moradin’s temple could pose some threats in and by itself, specially of none in the adventuring party is a dwarf. Tivak and his men would be able to enter unharmed but non dwarves who come with hostility could face undead dwarf guardians.

The main room features a great stone roughly cut and showing red glowing runes on top of it. This is an ancient prayer stone. They were carved from the very mountain were Moradin forges weapons of godly power. The stone radiates magical power, a PC can notice this with a Detect Magic spell. Dwarf priests channel divine energy through the prayer stones to empower their healing spells and incantations. Non priest dwarves pray to the stones but hold no power on them. Any non-dwarf character who touches the praying stone must succeed a DC 15 Constitution saving throw. The PC takes 13 (4d6) lightning damage on a failed save or half as much on a successful save.

The Quest and Negotiation

The city watch captain will hire the party to infiltrate the temple and capture Tivak and his men, dead or alive. He prefers to have Tivak alive but cares not if he dies in the process. When the party reaches the part of the temple were Tivak is hiding there will be a roleplaying scene.

Tivak is a criminal but not an aggressive or dangerous one, he will fight if need be, but he prefers a more civilized alternative. If the party is willing to listen to him, he can offer a better reward for letting him out, he can even try to hire the party to escort/smuggle him out of the city. Alternatively, Tivak is aware that the perfume merchant is worried about his perfume shipment who is now in the city watch warehouse. If the perfume shipment were to be recovered, the reward would be even greater, and the adventurers would befriend a wealthy merchant who might have even more work for them. This would require the party to directly oppose the city watch.

If all negotiation fails, Tivak and his men will fight. Tivak has a strong sense of self preservation, if the opportunity arises during the fight, he will attempt to flee. A nice scene would be Tivak fleeing to the crypts were he expects a groups of undead dwarf guardians to come to his aid. 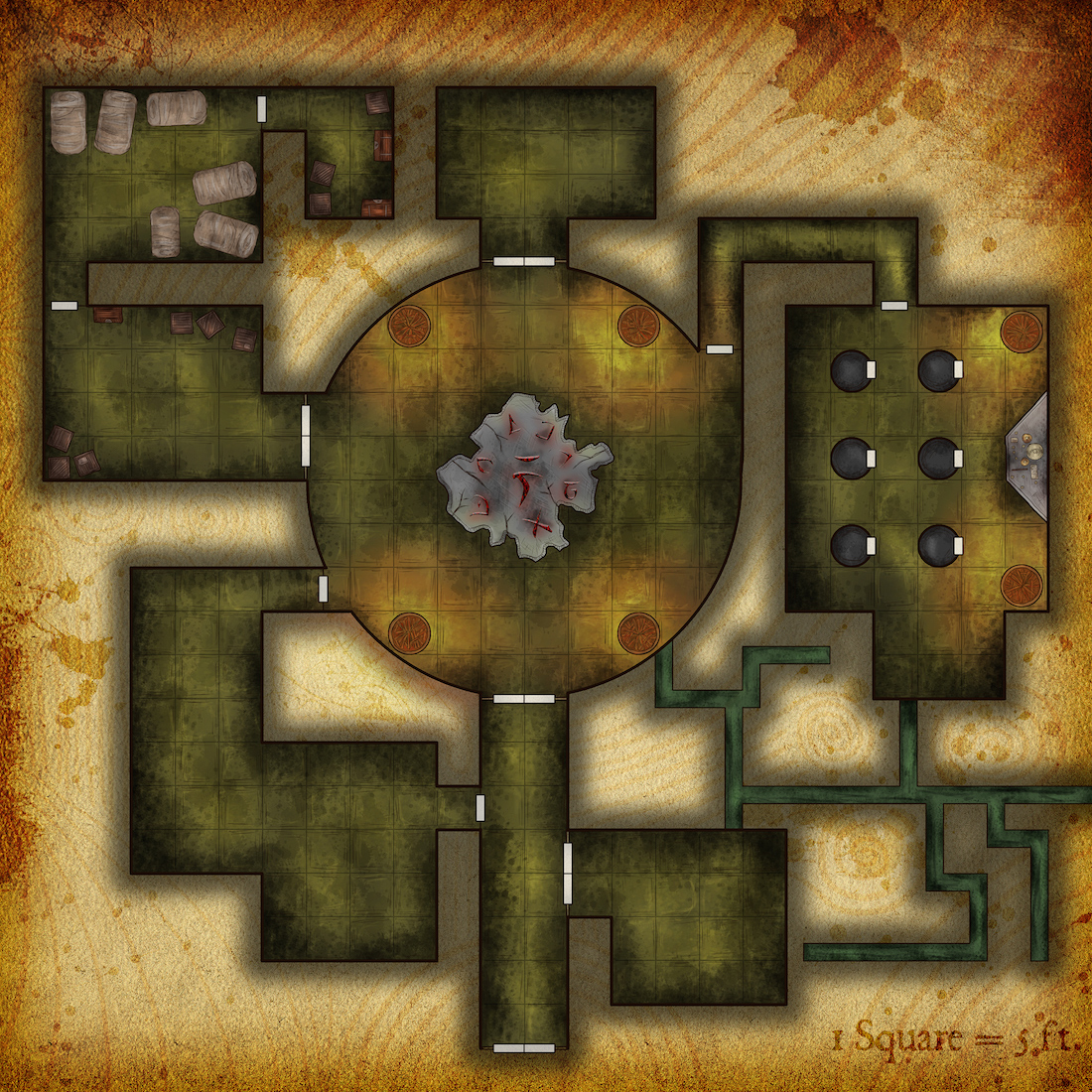