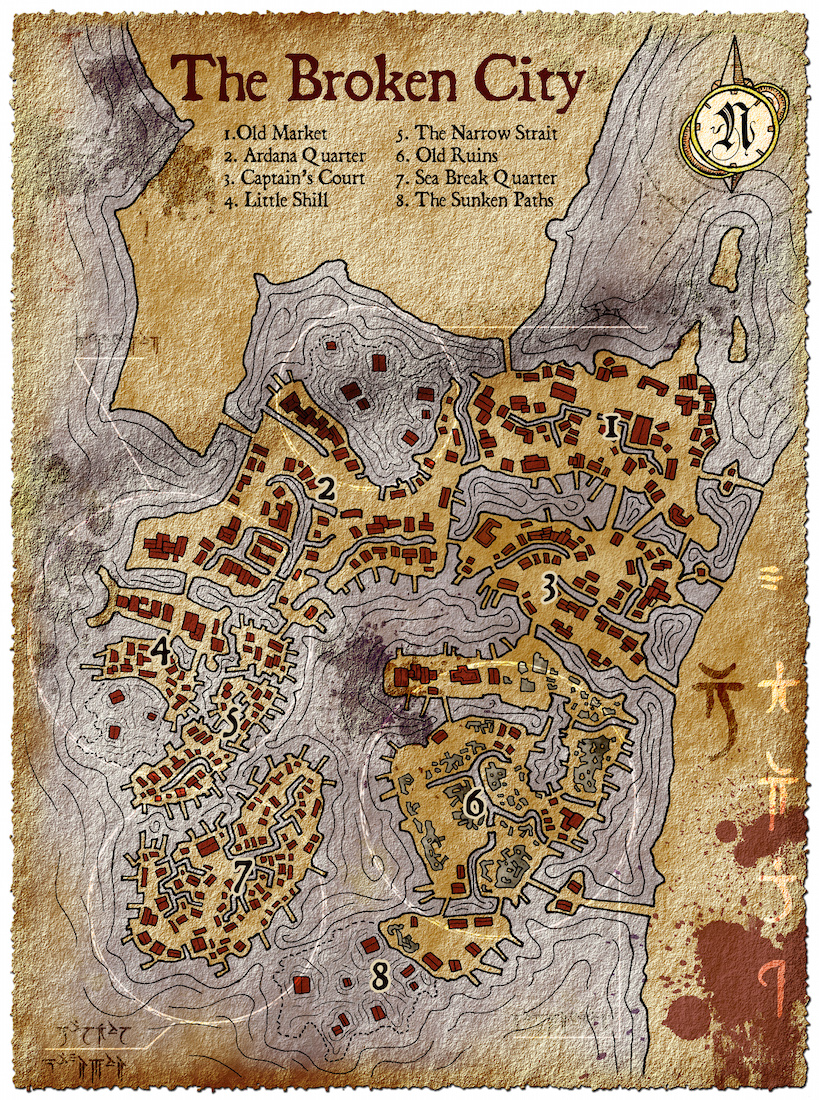 Feel free to adapt or modify this information to better accommodate your home game. This is supposed to be just a kickstart to your imagination, you are the owner of your world and a crafter of storylines, this is just  inspiration.

A good fifty years ago a powerful storm struck the port city of Al’Quadar.  The storm came from nowhere and stood strong for over a week. Al’Quadar was built in the mouth of a wide river; the storm caused the river to overflow. Parts of the city were washed away or destroyed in a matter of hours. Thousands died in the disaster, the very few who lived or escaped in time wandered through the wild lands, trying to find a safe haven; most survivors became permanent citizens of neighboring towns and settlements. The destruction was such that only a small quantity of survivors came back and tried t o rebuild the place unsuccessfully.

The place was shunned for years. Word of mouth became myth, and myth became common lore. People whispered about the broken city, a place neglected by the gods, forgotten by kings and avoided by the common man.

In some settlements there are now oral traditions about the broken city. Most famous of them is the Tale of the Drunken Captain. This tale makes children afraid of a drunken sailor who will come for them at night and drag them to the shore, to eat them under the waves. Sages do not believe any of those stories have any truth in them, but then again, their conclusions are sheer speculation.

In recent years, there has been a growing interest in rebuilding the broken city and make it whole again. The main reason is its location. It used to be a trade center for the region, all trade routes and merchants passed through Al’Quadar. There was even trade from inland settlements which transported goods on barges. The broken city is divided in quarters. They were naturally divided from the construction of the city, a group of islets in the river’s mouth are the main districts. The settlers buil d bridges to connect the islets and the main land. Some of them are nothing more than rope bridges, and these have rotted away long ago. Other bridges are brilliant works of architecture, stone arch bridges which endured the storm that destroyed the city and all the years that have come since then. The arches are high enough to permit even the largest trading barges and ships. This used to be one of the main sources of income for Al’Quadar, tolling the trade routes.

The restoration of the city is slow. The current number of settlers does not reach a thousand. A great percentage of them are not skilled builders. Some of them are just mercenaries or sellswords who came under promises of buried wealth and quests. Only the Old Market and the Ardana Quarter are livable. This is were the settlers currently stay, they are not doing any sort of trade, living from whatever valuable goods they bury from the destroyed districts. After fifty years, most places are buried under layers of sand and rubble. There is great need of strong men to help clean the place and rebuild. There is however no reason to believe the current situation is going to change anytime soon. This is a place for fortune seekers.

The Old Ruins and the sunken districts are the best places to find valuable stuff. There is a problem, one that none expected. It all started when foraging parties and treasure hunters stopped returning. They did not return. This was not a reason to panic, but unlike the usual faring of the town. A strong dwarf mercenary known as Carl Stoneface came back from treasure hunting one afternoon wounded. A bite mark on his shoulder, close to the neck. It looked black, the skin rotting. His other companions did not make it. A cleric of Chauntea who came to minister for the poor folk managed to heal him. Carl Stonface claimed that their expedition was suddenly ambushed by a group of men who looked like they had been dead under sea water for years. Their attackers’s skin was grey, their bodies blotted, strings of algae on their hair and all moved in a particular way, as if their muscles could not pull all the way through. The dead men attacked them like famished wolves, trying to eat them as they stood surrounded. Carl was the only one to make it back to the safe part of town.

After that first attack it has been confirmed that some of the people who died in the storm fifty years ago could find no rest in the afterlife. They remained in the ruins of Al’Quadar and attack any living thing that comes to them. Some of them still wear the city guard armor, with the forgotten seal of the city.

The theory is that there is an ancient artifact in the fort, the place is hidden under the water in the Sunken Paths. This is what arcane sages claim to be the true origin of the necromancy magic that animates the corpses in the area. Only valiant adventurers in search of fortune and fame would try to explore such a place. No one that matters thinks the broken city is important enough to clean and rebuild.