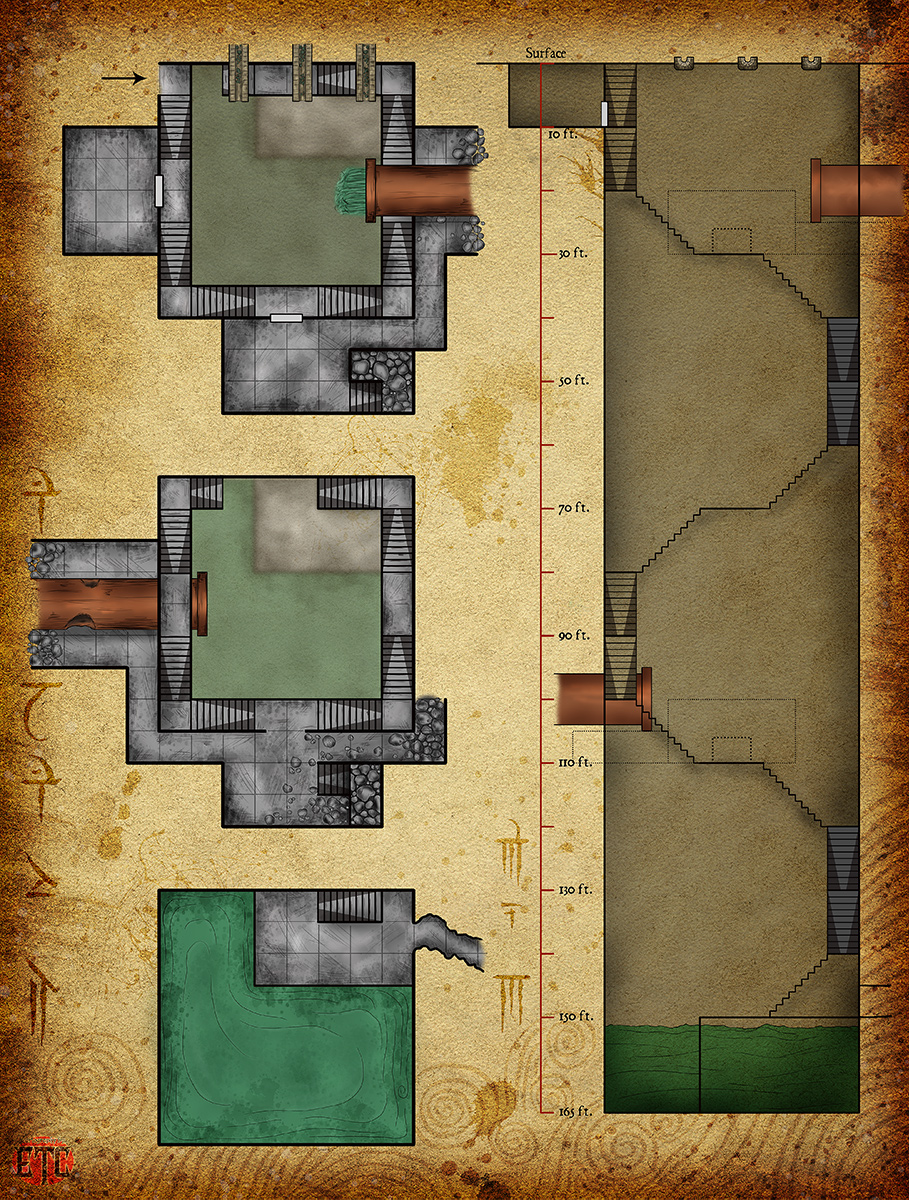 This DM’s inspirational material is meant for mid-low level adventuring parties. Monster and traps referred to in this supplement are just suggestions. Feel free to adapt any game information and/or background lore to better accommodate to your own group and adventures. The real purpose of this is not to serve as a “follow as is” thing, my intention is to provide food for the DM’s thought, a brainstorm of ideas that can be lifted or adapted to local games.

Background Lore (As spoken by the guard’s captain)

Life in the big city is a busy endeavor, thousands of people crammed together for the added benefit of safety and trendiness, for whatever they are worth. Big settlements stink, and I don’t mean that in the “I hate them” way. No, they really stink. They stink of people’s shit because drainage is worse the bigger the city. Oh I am sure people here do not mind the smell anymore, their noses are blind to it. People are born here, they grow up here and seldom go out. A good bunch of them have never had a good breath of fresh wild air. For all I know they might even think forest air stinks, ha ha ha.

Well… it all started when a shark was spotted in the main drain duct the goes out of the city and into the sea. Sea life never goes to the drains… Even you could guess that, you don’t like mindless blokes. The water in there is so dirty, so toxic that no one has ever cared for the possibility. Still someone saw a shark, and I disregarded it as a crazy thing; but let me tell you something, the sharks were real and there’s more of them. I sent some guards on patrol to explore the drains and half of them returned. The ones that lived came back with tales of fishmen wielding tridents and nets. They came from below the nasty water, attacking fast and mercilessly. And now… we have a big problem because the blasted fishfolk have set home in the main sewers collection pit.

I saw them myself when I went down there to kill them once and for all to no avail. They are sneaky and unpredictable, I lost more men in that foolish attack. We saw their leader, you know? A big muscle clad fish man with scales greener and brighter than the rest of them. He was not wielding any weapon, instead he carried a kind of scepter decorated with fish bones and a shark jaw on the top. That fish man had magic powers, with a flick of that scepter another soldier and I found ourselves completely paralyzed, I couldn’t even breath for a few seconds. I snapped out of that quickly enough to call for a total retreat. The other soldier was not so fortunate, he never snapped out of the spell and was butchered by the fishmen.

We didn’t even reach the bottom of the pit. See, it has a spiraling stairway down to the bottom. But I swear I saw shark fins in the water below. I would go down there again if it were not for my leg. See? One of them pinched me with his trident. I should be walking again in two weeks or so but I need this problem fixed now. I know the info I’ve given you is disheartening and grim, stuff like this often is, but I also want to be honest. The good news is that the senate councilmen are fed up with the extremely bad smell coming from their non-functioning drains. Oh I forgot to mention that, the fishmen clogged up some pipes leading to the sewers pit. That’s why the city is smellier than usual. Due to that, the senate has approved a handsome sum of gold for whoever fixes this problem. Get rid of the fishmen, kill them or convince them to go back to the sea, we don’t care. And don’t forget to unclog the pipes. Do that and that fat bag of gold is yours.

The pit is 165 ft. deep and 40 ft. wide. The only safe way to descend is by following a spiraling stairway that hugs the wall and descends in 10 ft. increments. It is built in this way to provide easy access to the various pipes leading to it, for maintenance purposes. Three ducts lead to the pit at ground level, they are obstructed with trash. This is not the sahuagin’s doing, these ducts come from poor parts of town and no one has bothered to fix them. Two other main pipes connect to the pit. One is 15 ft. below surface level and working properly. The other pipe is 100 ft. below surface level and doesn’t work. This is the pipe that connects to the rich part of the city where the council men live. The bottom of the pit hold a pond of water that is drained slowly to the sea through other pipes on the bottom. This is where the sahuagin came from originally. Shark fins are visible at all times here, the water is so obscure that the shapes of the giant fish are barely visible.

The bottom of the pit connect to a 5 ft. wide passage way. It leads to another part of the underground complex where the sahuagin have set of shop. Unknown to all, they are using the place as a prison for enemies of their sea tribes. They hold no interest for the city or its peoples.

They fishmen are Sahuagin, the chief among them is Thur’kuul, a Sahuagin Priestess. The spell described above in the story by the guard captain is a Hold Person spell, spending a level 3 spell slot. For their allies, the Giant Shark doesn’t work for this encounter because of its size and challenge rating, You could simply reduce the stats and have a regular shark. A Swarm of Quippers is also a great addition to the sahuagin encounters at the bottom pond.