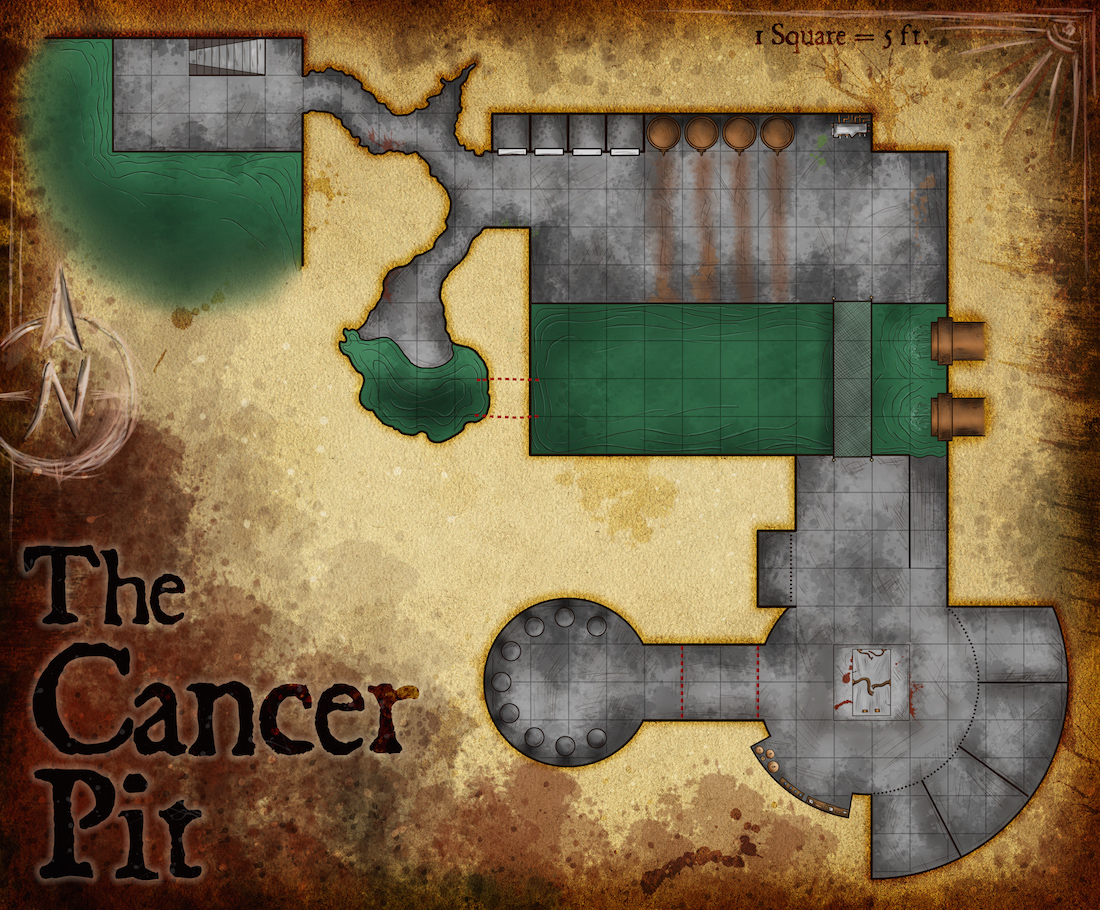 This is part two of the sewers mini adventure first referred to in map 120. The next background lore explains the other side of the story and how the sahuagin came to invade the city sewers. They are not the only ones there, a group of captive sea elves were also brought for torturing. The background lore is told in the form of a story. You are of course welcome to change or adapt any of this information to better accommodate to your own setting or game.

“Surface dwellers look to the seas and oceans and all they see is a food source. Even the ones who live on boats and spend their lives as sailors ignore what happens under their feet. All life came from the watery halls of Tadar’Anama the goddess of oceans and tides. Surface dwellers can all trace back their origins to the primordial ancestors, and all of them lived under the waves. They are naïve to think their airy existence is all there is. The wars and struggles of the surface are playthings compared to the huge conflicts waged underwater. That is why humans and the other lesser races are to be consumed and disregarded. They are the uncared for leftovers of the real watery world.”

An extract of the Book of Watery Abyss, a holy script to many ocean civilizations. This is considered part of the creed of sahuagin, the savage fishfolk.

Thur’kuul is a sahuagin priestess of Tadar’Anama, she leads a hunting party of fierce sahuagin. She is old by sahuagin standards and will enjoy an enlarged lifespan due to her fervor and faith. Though the scripts she preaches hold no regard for surface peoples, she and her party do not really care much for them, they have bigger threats to worry about than humans and their puny wars. Sahuagin are part of the biggest conflict to date, the great war between sahuagin and the sea elves. The war is so old the ancient scripts of both races speak of its start. Worse of all is the suspicion that both races trace back their ancestry to a common race that split for an unknown reason. There is nothing so real as the hate sahuagin and sea elves feel for each other.

In a recent hunt, Thur’kuul and her hunters ambushed a group of sea elves scouts. They had no chance, most of them perished but Thur’kuul managed to keep three of them alive for questioning and torturing. Thur’kuul is also a student of anatomy and medicine, she particularly enjoys ripping apart sea elves, all to the glory Tadar’Anama.

After taking the elves captive, they fled to the lands near the coast. There was a place she visited years before. An underground complex of round halls and obscure fresh water. They set up their camp in the bottom of the complex. One of the chambers was a really tall pit where they could see sunlight. This was a man-made place, now a consecrated place to Tadar’Anama for the questioning of the sahuagin enemies. The place had pipes, levers and controls they could manipulate to start or stop the flow of obscure water from the pipes leading to the main pit. They flooded part of the gate and later clogged the pipes they did not need. After that they summoned their sharks to the bottom levels. Sharks are regarded as equals and brothers to the sahuagin in the holy scripts, and they always answer the calls of any member of the sahuagin culture.

Thur’kuul had a good first night dismembering and flaying the first of the sea elves. She did not break the noble warrior, he never revealed any information. A good death by the standards of any sea race, she could respect that.

Across the halls in the cells, three sea elves awaited their turns behind iron bars. Two of them plus the one who had just died were brought here from the hunting party. The fourth sea elf was already in the cell when the other three arrived. His name was Farael. He claimed to belong to a southern tribe, thus explaining his foreign elven accent. Farael was captured from an underground farming community where most villagers were killed by a hunting pack of sahuagin and kuo-toas. The other two elves trusted his word and revealed their intention to try an escape from the underground facility. They were severely outnumbered but the sea elf in charge, Raddenneth, knew this place. These were the sewers of a large capital of surface dwelling men, and it wouldn’t be long until they came down to hunt the sahuagin for messing up their pipes. When the time came, if humans were fast to come, they would break out and try their luck for the sea. They knew that the pipes would be guarded by sharks, but hopefully they’d get their hands on some spears and fight their way out or die trying, a better way to go than being flayed on a table.

To everyone’s surprise, humans were fast to come. And they came in large numbers. The elves in the cells never saw them, but they could hear their screams and the sounds of swords and spears clashing, the echoes of metal ringing all across the underground halls. Raddenneth did not expect the humans to win the fight, though sea elves are more open to trading and having cultural exchange with surface people’s, they also believe surface dwellers are inferior and lesser warriors, even more so when facing blood thirsty sahuagin. While the sahuagin were busy fighting the city guards, Raddenneth used a spell to melt the iron lock and open the cell. He got out, grabbed some spears leaning on a nearby wall and gave them to Farael and his other companion. They ran to the next big hall where a narrow metal bridge crossed over a pit of obscure water, they only had to follow a narrow passageway through the very rock under the city and reach the main pit, where underground pipes would lead them back to the sea.

Two sahuagin standing guard faced them after crossing the bridge, Raddenneth and his companion were fast and dispatched them in a matter of seconds. The elf warriors were fast and strong, they only got captured because they had been outnumbered five to one. Now the odds appeared to improve. Raddenneth walked three paces towards the narrow passageway when he stopped suddenly, the sound of a spear and the gargling of flowing blood in the air. He turned ready to fight. Before him was his valiant companion, a spear blade impaling his throat. In his eyes the fading light of an elf who knows his time has come and death approaches swiftly.

Farael held the spear. With a swing of his wrist the spear disgorged itself from the other elf’s throat. The elf fell to the ground, dead and unmoving. Farael eyes looked different now, they were bloodshot and deep into his face. His quills opened and close violently revealing a red tint inside. Raddenneth was immediately aware of his mistake, they had all bought the tale that Farael was a sea elf. He remembered the real panic in the elven settlements, the paranoia that lead elves to betray one another only because they feared or suspected being infiltrated by a Malenti. A Malenti was a sahuagin born resembling a sea elf. A perfect copy and the perfect spy. He was left in the cell to look over them and maybe interrogate them in a more subtle way.

Raddenneth jumped to fight and their spears clashed once and again. Farael, if that was his real name, was a solid fighter. After a minute of fighting it was clear both of them held the same fighting prowess. Battles like this were the most dangerous, the first mistake would mean death. The echoes of conflict from the great pit had faded seconds ago and Raddenneth’s time was ending. The jumped to battle but before he could reach Farael, all his muscles contracted violently, even his lungs stopped and he could not breath. He felt vaguely surprised he did not fall to the ground, he only stood there, quiet and still. His mind unaffected, he commanded his body to move with no success. Farael only smiled and put down the spear as a sahuagin entered Raddenneth’s line of sight. It was Thur’kuul, the priestess. She held her scepter in an arcane way as she continued the spell that paralyzed him. He had lost. He was taken back to the cell, now with both hands bound top his back. The Malenti was now not a prisoner anymore, Raddenneth saw that Thur’kuul trusted this Malenti.

Thur’kuul approached the iron bars of the cells, opened her mouth and spoke in the elven tongue: “Valiant warrior, your skin will hang in the watery halls of Tadar’Anama tonight.”