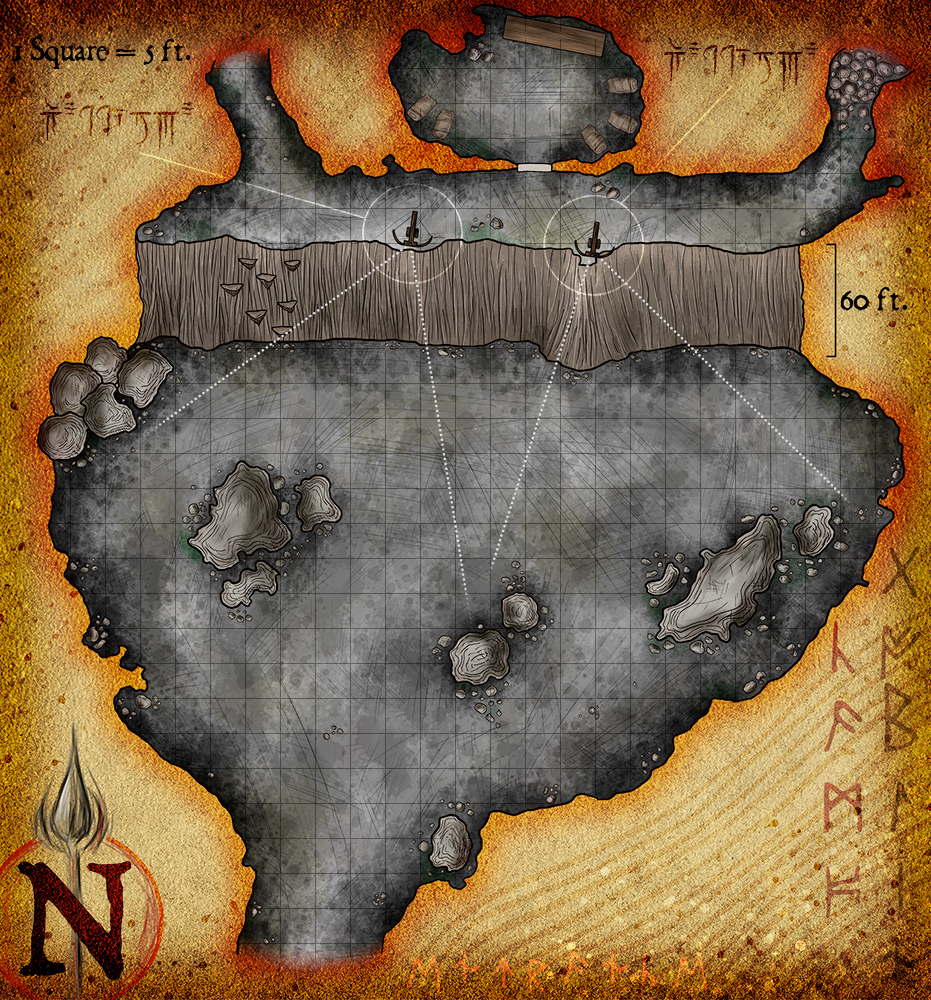 The common folk panic once more. Humble men working in the fields and raising cattle are always the first to fall under the attack of brigand races. And the most common of them are the goblinoid kind. They are not particularly strong or intelligent individually, their strength lies in their numbers, for they are many. Their second best strength is just how cruel and merciless they are. A goblin will seldom show mercy, they are ruthless bandits who scour the land and take what they find.

Inconvenient as they are, a well provisioned group of guards or knights is often enough to get rid of the pestering goblins. From time to time, however, a smart and strong goblin rises and finds a way to create a stronger force. Such natural leaders should be feared, they command high number of foot soldiers and with luck, they strike deals with hobgoblins, bugbears and sometimes even ogres. Out of those four factions, the one with more numbers is usually the one in charge, and goblins tend to be the one, but only if they have a good leader. Otherwise, a hobgoblin will fill the role.

Tarkin Wargbane is the leader of a strong band of goblinoids, they move often to avoid pursuit after plundering a region for too long. Tarkin Wargbane has a knack for leadership and most other members of the tribe respect him. He earned his surname when he was younger. After a lost duel, he was taken captive and thrown to a pit with two wargs. His captors expected him to die. Tarkin grabbed a stone and brought down both beasts. After showing his strength in the pit, a group of goblins jumped to his aid, boasted by sheer respect for his accomplishment. One of the wargs wounded Tarkin severely, the scar is still visible on his chest and he never covers it.

Many travels and adventures brought Tarkin to his current location. His scouts found a cave in the hills, a few miles away from farmlands and cattle farms. The perfect spot to pillage for a time, before emigrating away after getting enough attention. Inside the cave, after a long meandering passageway, the tunnel opens up to a large chamber, enormous stalagmites are visible all around the room, small boulders, stones and debris are scattered everywhere. On the opposite side of the chamber, a sixty feet tall wall rises up to an elevated ledge. There are several rock outcroppings on the west side of the wall. The go up to the higher level of the chamber. The goblins use these outcroppings to climb, it is not an easy climb even then.

Tarkin Wargbane saw the benefits of such a natural rock formation. His men had learned the ways of men from a parchment a while ago. This scroll explained how to build an oversized crossbow. They built two of these ballistae and placed them high near the edge of the ledge. The quality of the weapons is not the best, the range is not great but serves its purpose well enough in the relatively small cave chamber. They can load the ballistae with nets to immobilize their foes and with regular bolts.

At the top of the cliff, there are two tunnels visible from below. The east one is blocked with stones and rubble. Tarkin Wargbane has not yet commanded his lackeys to clear the tunnel, no one knows where it goes. The west tunnel goes deeper down to a cavernous complex, the rest of his tribe have set store there. Many tunnels keep going straight down from there, the goblins have not explored them all. From time to time a creature from the depths emerges and attacks the goblins, it is believed among them that some tunnels go straight down to the underdark.

Tarkin is a strong goblin leader. His plunder parties are scouring the land and killing the common folk. Several guards lost their lives trying to hunt down the goblin threat. By the time the adventurers hear about this, the local authorities are already panicking and willing to pay a handsome reward if the valiant heroes are able to get rid of the goblins.

An alternative to this approach is to have the PCs in town while a goblin attack takes place. This quest is aimed for low level parties, and goblins would not be attacking a walled city. So the best place to make use of threats like these is in small hamlets, towns and farming communities, these settlements are ill equipped to deal with larger threats like a goblin band. The attack takes place and the adventurers help defend the settlement. After that, the goblins will be on retreat and the PCs can hunt/track them back to their cave lair as depicted in the picture.

The encounter in the cave can be really dangerous, depending on the number of monsters and party level. The terrain is the biggest advantage for the goblins. The 60 ft. high cliff is a protection the PCs do not have, plus the ballistae. Once the adventurers enter the chamber, they are faced by a strong force of goblins. Depending on party level, you can also add some other stronger goblinoid foes like hobgoblins, bugbears and an ogre or two. They fight in such a way that they retreat to lure the party into the ballistae’s range. Other goblins on top of the cliff can aid their allies with shortbows or by throwing stones.

Unless the party has a strong range game, they’ll have to deal with the henchmen down below before dealing with the ballistae operators and any other bowmen on top of the cliff. There are big boulders and stalagmites that the party can use as protection from ranged attacks while dealing with the melee attackers, if the are smart about it.

Bold adventurers might try to split from the party to climb the cliff and deal with the enemies on top directly. The simplest way to get to the top is by climbing the stone outcroppings on the west side of the cliff. Any character trying to climb the cliff face there must succeed a DC 14 Strength (Athletics) check to be able to climb half his speed. Failure means the character loses time finding a good footing and does not move in any direction. Failure by 5 or more means the character has lost his footing and falls. The cliff is 60 ft. high. Depending on his position, damage will vary. It is up to the DM do decide if the falling character stops at the next stone outcropping, taking 4 (1d6) crushing damage, or if the character falls all the way down to the base of the cliff, potentially taking 16 (5d6) crushing damage.

Tarkin Wargbane is not a coward and will be waiting for the adventurers in his room on top of the cliff with his best warriors. If he sees the battle is lost he will try to escape with his life. He wears a purple ring that can make him invisible for a time (described below).

Tarkin’s Ring (Attunement)
This blue ring is made from lapis lazuli, it is inscribed on the inside of the ring. The runes are blurry and impossible to read.
While attuned, the wearer can spend a bonus action to touch the ring and become invisible for 30 seconds. Anything the wearer is wearing or carrying is invisible as long as it is on the target’s person. The spell ends if the wearer attacks or casts a spell. This ability is spent and recharges automatically at dawn.