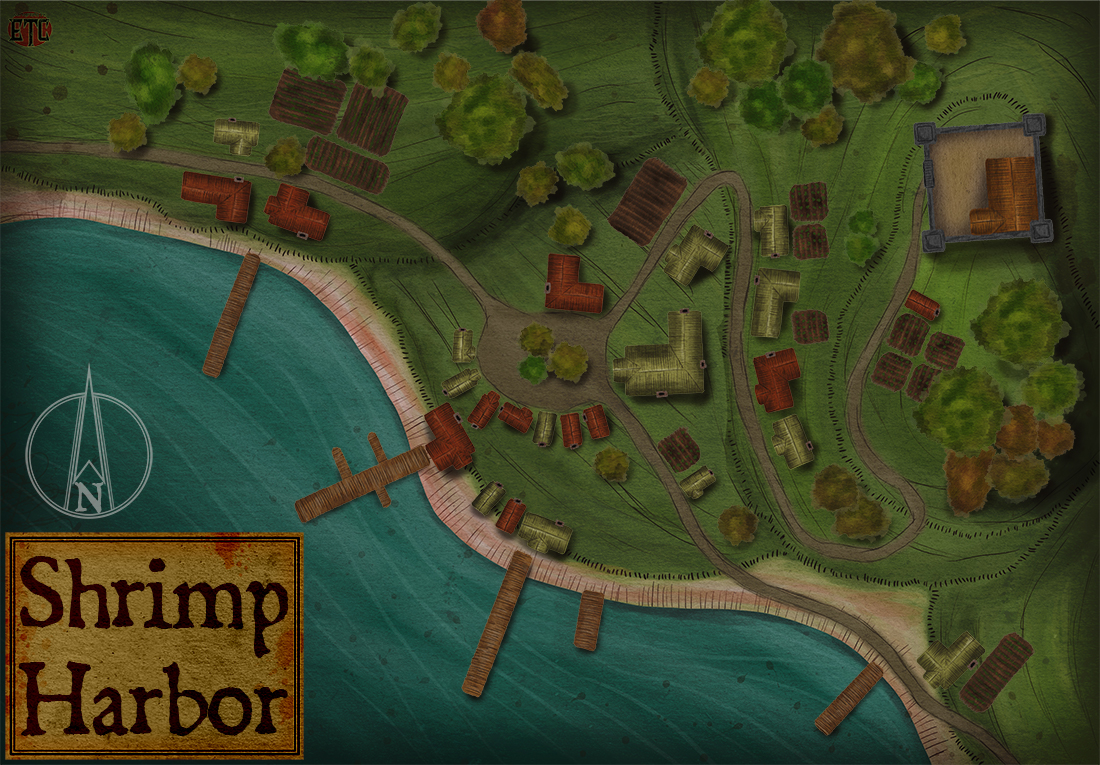 This game supplement describes the small village known simply as Shrimp Harbor. The description includes general information about the village and some ideas to translate directly into adventures. Many loose ends are included for adventurer parties to tackle on. My intention with this village in particular is to serve as a “starting town” for a game. As such, the challenges and adventure ideas are aimed towards low level parties (1-3)

Shrimp Harbor was originally settled by the Barmont family over 4 or 5 generations ago. Darley Barmont was a lowly fisherman and merchant who noticed how shrimp thrived a few miles from the shore in the region. Apparently the presence of a particular variety of coral attracted shrimp to the area and feed them. The population of shrimp was unnaturally big there. Darley’s enterprising mind started to work and soon enough he secured a loan from the neighboring city’s lord. With the gold he bought two fishing cogs and had a third bigger one built. Shrimp was so abundant it felt more like harvesting than fishing. Over the years the Barmont family grew wealthier, other fishermen moved to the harbor and a small village started to grow.

While the fishing, not only of shrimp was plentiful; fishing was still a low paying job. The inhabitants of Shrimp Harbor do well, but they are not rich. Except the Barmont family who had a fortified manor built on top of a hill overlooking the harbor. Three generations later, with the village growing in size and importance, it was necessary to certify the harbor and neighboring lands as a duchy of its own and to appoint a duke. The Barmont family were the only and better choice. The current ruler, Duke Marin Barmont is the third duke yet, after his father and grandfather. When he visits the court in the capital he and his family are regarded lowly amongst the other highborn families, since they are only a three-generation nobility. Duke Marin Barmont is referred to as “Duke Shrimp” behind his back.

Duke Marin Barmont is the third generation in nobility in the Barmont family. He was born with the “highborn” state. His father was already a man when grandfather was appointed duke. His father grew up working in the docks and in the sea, just like the rest of the family. Not so much with Marin, he grew up giving orders and supervising other people, basking in the shade while others worked hard. His father knew the value of work and tried to teach Marin the real merit of Barmont family, which was built on hard work and quick wits. He failed and passed away two years ago, leaving Shrimp Harbor in hands of a man who is less of a “working man” and more a diplomat, and a bad one at that.

There is a big building right at the village’s central square. A sign by the door is scribed in golden letters: “The Shrimp Bucket”. The place was built by Lodgen, a dwarf who saw and opportunity when the village began to grow almost 50 years ago. He has been the innkeeper and tavern bouncer since then and his face and manners are known to all in Shrimp Harbor. He was friends with the past Barmonts, they were all hard working men like himself; he has a difficult relationship with Duke Marin Barmont because they do not share the same views about what is the best thing for the village. Although Duke Marin is the appointed ruler, since the village is so small and everybody knows each other, decisions almost always ought to be popular consensus. Lodgen has more support than Marin does. Mainly because dwarves are long lived and everybody’s parents and grand parents were clients of Lodgen. His tavern serves as the only distraction place in the village and the rooms for rent are always useful for traveling merchants who come in passing, buy wares and then leave the morning after.

Shrimp Harbor is still growing in size with people having children and more people moving in in search of honest work. However its size is getting to the point where it is attracting attention from unwanted parties, criminals, brigands and thieves are starting to make sporadic appearances. The village does not have a guard or any kind of armed force, save for the Barmont’s personal guards in their manor.