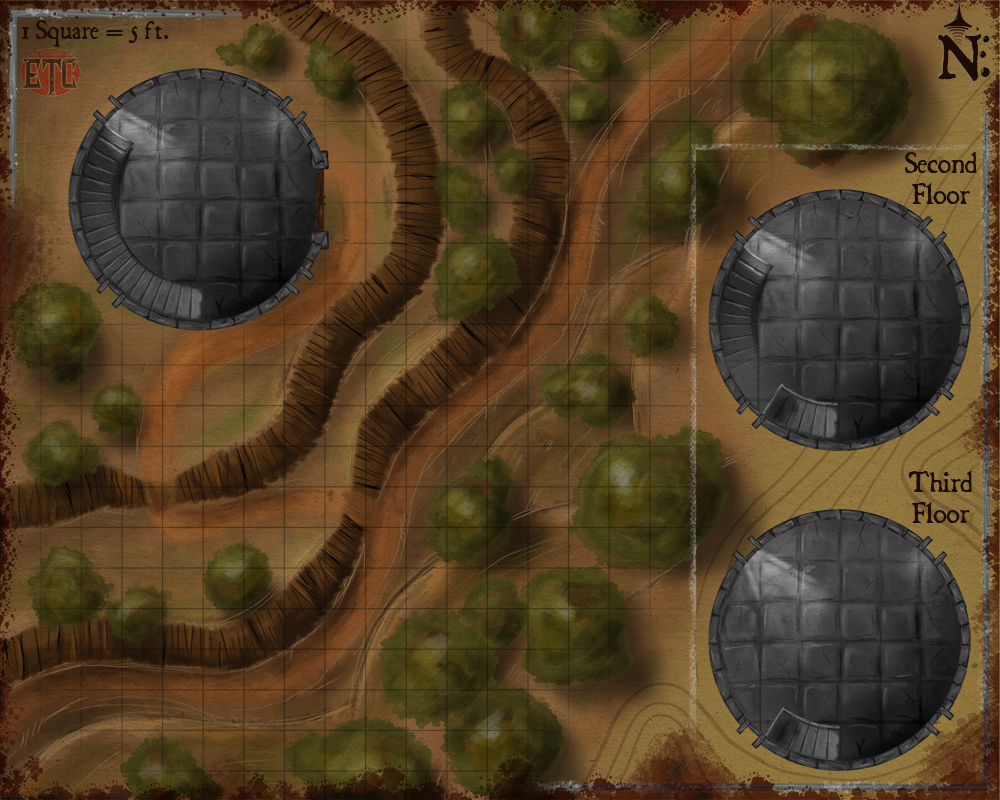 Two days away from the big city, near the northern mountain range, the border between the two kingdoms is marked by an old tower on top of a hill. The tower was built almost 400 years ago by the founders of Arella, the Kingdom of Gold. As it is now, that name does not make much sense any more, the gold mines dried up almost 70 years ago and all that is left is the coal to be mined. Still the country is rich, but not so much as had been predicted.

The old watch tower at the border was a defensive measure from raiding parties and brigands that often trespassed into Arella. The sellswords and cutthroats came from the neighboring kingdom. They did not represent the other kingdom’s stances, but they had to be dealt with. A king back then, centuries ago, gave the blessing of the crown to a newly formed order of knights that swore to protect the golden lands from those who would pillage and pilfer. This respected order came to be known as the Order of the Flaming Falcon. A red falcon embroidered on a white background was flown in their banners. For years the order protected the border successfully, until one day the brigands showed in lesser and lesser numbers. The neighboring kingdom became better at controlling their own bad apples and sooner rather than later, trespassing the border and facing the Order of the Flaming Falcon was less appealing than simply staying at home and do crime there.

The tower was abandoned, along with other towers and holds along the border, only a holdfast on the main road was kept to present day.

Strange reports from the countryside have brought attention to the old tower near the border. People reported missing and strange cattle injuries are the hearsay in the little towns near the place. The tower was taken by Ruffenderk, a goblin mage. He is the leader of his clan. A few weeks ago they were traveling in search of a place to stay temporarily when they came across the abandoned tower. Since the tower showed signs of no recent use, they took it. The tower is built in a defensible position due to the very nature of its purpose.

This detail did not escape Ruffenderk, who is very confident that they can take full advantage of it and create a strong position. After taking over the tower he sent goblins on scouting patrols. He also set other goblin teams to the task of digging an underground level for the tower. That will take longer but will pay for itself. Ruffenderk knows that goblins are not a strong opposition by themselves. That’s why he stroke a bargain with a pair of ogres who are now part of his clan. He wants more ogres, though. That’s his main goal right now.

Ruffenderk is a blood mage. He discovered his draconic magical heritage through trial an error, he is a talented individual. He is not educated formally in the arts of magic, but since most magical texts are written in draconic, and he knows how to read it, he pays his lackeys handsome rewards for anything that is written in draconic or that belongs to a mage. The other goblins are not as smart or cunning as he is, unfortunately. They see farmers and commonfolk with books or papers and assume they are mages. That’s why some people have disappeared. Ruffenderk does not mind either way, the clan has to eat too, and the more ogres, the more food will be needed.

The surrounding towns are still not sure that it is goblins the ones who took over the tower, they have been careful, but they reported the disappearances of people and cattle to the local lords. A scouting party of town guards was sent to investigate and terminate any threat they found. They were not heard of again. The situation is getting dire and the peasantry are abandoning the farms to find refuge in the walled cities. Without the season’s harvests, the city will be in serious trouble in a few months during the winter season.

The local lord has made an open call for valiant people, sellswords and adventurers. He has promised 200 golden crowns to whoever explores the kingdom border and brings back the head of whatever monster is found. Several hunting parties are assembling to follow this quest. (Obviously the PC’s party will be the one that “randomly” ends up exploring the goblin tower)

This one-shot idea is appropriate for a low level party (1-5). The difficulty can be adjusted easily on the fly by adding or removing creatures. For the lower end of the level range, encounters with goblins and possibly a hobgoblin or two will suffice. Higher level parties will be able to take on the ogres.

You can always let the party face bigger odds if they are accompanied by supporting characters. With this background lore, the perfect choice would be a knight or two of the Order of the Flaming Falcon. Other than that, then any sellsword or mercenary make good disposable characters. For Ruffenderk, you can use the Mage stats from the MM. Just modify it so it’s a goblin instead of a human.

Assuming a level 3 party, a nice challenge for the boos fight could be: Ruffenderk, 2 Ogres, 6 Goblins. Add or subtract monsters as necessary, specially if the party is low on resources.