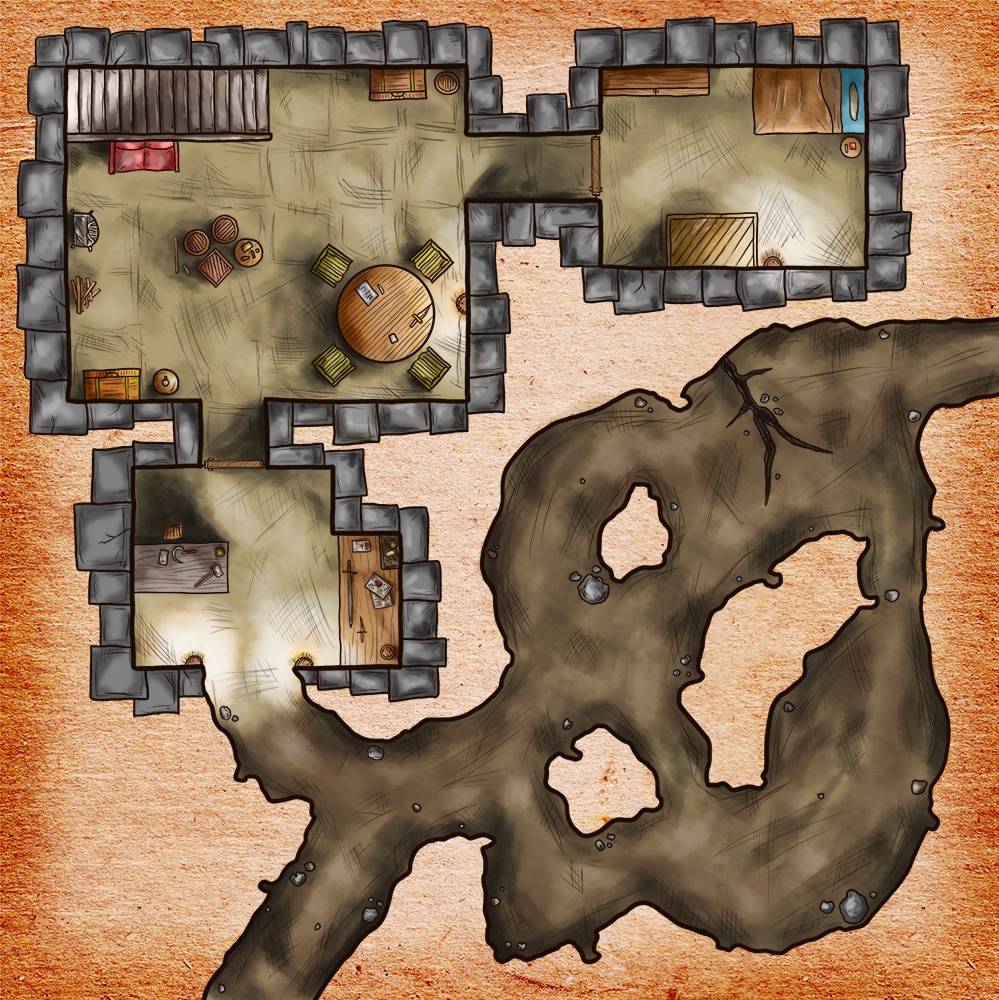 The following adventure idea is appropriate for a party of four level 3 characters. If you wish to adapt the adventure to different party sizes or levels, then adjust the number of enemies accordingly. In this one-shot idea, the party is investigating a crime lord’s safe house. They are however not aware that the crime lord has already escaped through a series of tunnels that exit through the safe house’s basement.

Small city has been some better days. Sir Tallhart, the commander of the city watch has been in service for the past 10 years. He is currently looking forward to retiring after a long life of guard and mercenary work. Unfortunately his position and reputation is in danger. The criminal activities of a local guild have been on the rise during the past year, it started with petty crime and muggings, but it’s been known for months that the thugs are in control of the docks. Rumor has it that they are even smuggling dangerous substances and even slaves. Sir Tallhart has investigated these leads for the better part of a month. The person in charge of the criminal operations is a drow named Garendil, but most refer to him as Rockstrangle. Use the stats of an Assassin for Garendil.

Sir Tallhart and some of his guards performed a raid the night before on a miserable pub by the docks. An informant tipped them of about some members of Garendil’s group in the place. Some of them escaped and died during the exchange but they captured one alive. Unfortunately Sir Tallhart took a sword wound to the right leg and is unable to walk. After interrogating the mobster they found out where Garendil’s safe house is.

The characters are to be hired by Sir Tallhart to go and arrest as many thugs as they can, with special attention to Garendil. He is to be captured alive. Sir Tallhart can’t come because of his leg wound. He also thinks it’d be a bad idea to send more members of the city guard because they are known and a big group of people will be easily noticed.

When the PC’s arrive to the appointed location, the house seems deserted. There’s no one inside in the first story, but a trapdoor under a sofa is in plain view. Opening it reveals a passage to the basement, where some thugs are waiting. What’s next is a read-aloud text describing the scene, you can either read it as is, or paraphrase it in your own words.

“The trapdoor before you is not locked. Pulling it let’s out a cry, as the hinges creak from lack of oiling. An old wooden staircase descends one story to the cellar. The walls are built from the big stone blocks, they’re the foundation of the house. The floor is plain dirt. Inside the bleak room there is an assortment of furniture. There is a wooden chest right in front of you. The room also features an iron stove, enough wood for a few days, some barrels and wooden boxes that appear to hold food, and an eating table with for chairs. There are 4 men sitting at the table playing dice and two more around the room, by the stove. They don’t react from the sound of you coming down, but as soon as they see your faces, they draw their weapons in an instant. All of them look at you with a mix of hate, fear and bloodthirst.”

The men in the room are Garendil’s thugs, three of them are Thugs and the other three are Bandits. They don’t mind the characters coming down the stairs because they are waiting for 4 other thugs who went out on an errand. You can use these other 4 criminals as a reinforcement during any of the encounters. As soon as a battle breaks out in this area, the other bandit’s in the workshop are alerted and prepare an ambush.

Treasure: The bandits hold 3d6 gold coins among them. One of them has a Potion of Healing in his belt.

The bedroom on the eastern past of the basement is often used by Garendil. He is not here at the moment, instead he is overseeing some weaponry work in the workshop. The chest contains an variety of weapons and utensils. It does not appear to be used much. The closet on the north part of the room is locked. A passive Wisdon (perception) score of 16 allows a character to see that there is a small hole right under the lock. This is the shooting hole of a poison dart trap.

To open the closet doors, a character must make a successful DC 16 Thieves’ Tools check. The doors can also be forced open with a successful DC 17 Strength (Athletics) check. If a character fails the Thieves’ Tools check, or if they force the doors open, the poison dart trap is triggered. The person in front of the closet must roll a DC 15 Dexterity saving throw. On a failed save, the character is struck with the poison dart and takes 10 (3d6) poison damage. If he passes the save but there is another character standing right behind him, he must roll the save with advantage or be struck by the dart.

In case of a failed lock-picking check, the doors are not open and the poison dart resets. It can fire three darts this way. If the character lock-picking the doors wishes to stand outside of the fire range of the dart, he can do so by rolling Thieves’ Tools at disadvantage.

Read or paraphrase the next text as the workshop’s door is opened.

“As the door slides open, the room in front of you is small. Strangely enough there is a gaping hole on the back wall of the room. The wall is cave out into a series of tunnels. You see the elf you are looking for, Garendil is back there, retreating into the dark tunnels. The room itself is a workshop, two sturdy wooden tables inside. On top of the tables you can see some tools and weapons. A quality looking longsword is sitting on top of one of the tables. There are four men in the room. Two of them are behind the table in front of you, and the other two are at the tunnel’s entrance, covering Garendil’s escape. The four of them wield heavy crossbows. As soom as you take your eyes from Garendil, the four men pull the triggers and fire at you.”

One Thug and four Bandits are waiting in this room setting an ambush. Unless the characters enter the room with some information about what’s going on inside, they will fall prey to their enemies ambush. An active Wisdom (perception or Investigation) check at the door will reveal that there are people inside the room speaking at low volume. If the characters simply open the door they will be surprised during the first round of the fight. The enemies will try to shoot as many crossbow bolts as possible, if they are attacked at melee range, they drop the crossbows and draw their melee weapons.

The tunnels are completely dark, characters without darkvision will need a form of illumination to navigate in this area. Garendil is waiting for them deep inside the tunnels, by the eastern exit. He is in company of one Veteran fighter and three other Bandits. He keeps three Death Dogs tied to a rock in the wall. They are well fed and loyal to Garendil. He sets them free and sends them to attack the party once they enter the dark part of the tunnels. If the dogs are killed. He orders his men to cover his retreat. These men are loyal, except the veteran, who is only here for the money and could be swayed to stand down his weapons for a good pay.

If a character tries to negotiate by offering a minimum amount of 25 gold pieces and succeeds on a DC 15 diplomacy check. The man orders his men to stand down their weapons and allows the party to continue. Garendil is fast and knows these tunnels well, perhaps the party will arrest him today. Perhaps he’ll live to seek revenge at a later date.