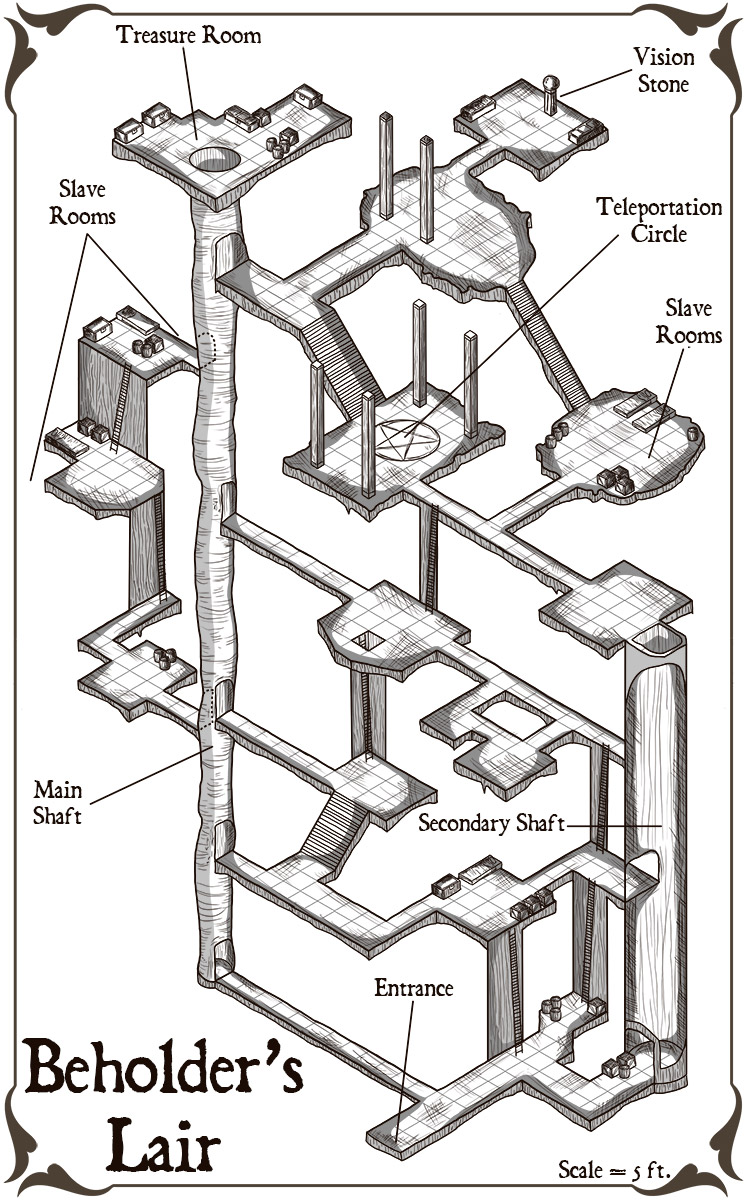 As the party visits a known contact and patron they stumble upon tragedy. The person has hired the party a few times to get rid of petty criminals and some smugglers. The reason for the party’s visit this time is a letter they received. Their patron requested an immediate meeting to discuss urgent matter. The note said nothing more. When the party arrives to their patron’s home they discover that the man is now missing and no one has heard of him for two days. The last person to see him was a house servant who saw him go into his study and lock himself in.

The two house servants do not own a key to the study but they know that there is a secret exit through complex tunnels. They believe their patron left. When the study is explored it is cleared that something happened there. There are signs of recent conflict, an overturned table, ink vials on the floor, a single blood stain on a curtain and strangest of all, a sizable quantity of fine grey dust by the desk. Any person studying the room gets a sensation of being observed. Anyone could swear there someone looking just out of their field of vision. There seems to be no plausible explanation for the strange vibe in the room. If the party explores the place further, they encounter a half finished letter in one of the desk’s drawers. It reads as follows:

For the last two days I’m growing more paranoid by the minute. At first I thought it was just my own nerves betraying me. Today I am convinced I’m being targeted by some kind of foul magic. A type of dread spell of some kind. I feel like someone I watching me. I heard a noise coming from under the trapdoor in the library so I put everything I could find on top of the trapdoor, however I am not sure it will hold. Depending on who arrives to read this letter I am starting to fear they won’t find me.

If it’s you, my great friends, you must know the reason why I summoned you. Through some of my agents, two of which are dead now, I discovered a criminal guild which is now bringing slaves from our neighbor kingdom. I have reasons to believe that they have brought over 80 people. The strangest thing is that we could find not a single one of them. That’s when we tortured and interrogated a criminal we captured and got the information out of him.

There is a monster living under the city and it is requesting slaves to be brought for him. His followers are strange people, they have an open eye tattoo on their left arms and seem to be capable of doing the unthinkable for their overlord. As if they were the most fanatics of henchmen. I’m convinced that this monster is controlling their minds somehow, just as it is doing with me right now, as I feel him get ever closer and closer. If you find me dead, or don’t find me at all, open my vault, the number combination to open the door is carved under my bed frame, on the wood. In the vault you’ll find a magic sword that was bequeathed to me from my father. I was never much of a swordsman and since I never had children… well I thought you should have it. Apparently the tunnels under my manor have been breach or they connect deeper than I thought, I never had the need to go down there.

I just heard an explosion in the library. They’re coming ! So long my friends, these are my last words.

Feel free to change this letter or the rest of the background lore to accommodate your game or adventure. The party’s patron or friend is now dead, what happened is that a beholder overlord named Forzekkar has taken over the city criminal guild. It charmed them with its eye ray and that’s why these new lackeys are fearless and fanatical. The beholder fanatics have started their own cult, they worship the eye lord and obey every one of his commands. As a sign of loyalty, they have the great eye tattooed on their arms.

Forzekkar owns a vision stone. Just like the party’s patron has been hunting for the leader of the criminal organization, Forzekkar has hunted him. He recently found out where the manor was. By sheer coincidence, the manor’s escape tunnels where really close to the sewers that the criminals and the beholder are using for their own ends. Forzekkar used its disintegration eye ray to connect the tunnels and assault the manor directly.

Forzekkar likes challenges, like others of his kind. He consider himself better and more perfected than other beholders (just like any other). He is proud beyond measure and feels at ease when every living thing around him is just there to serve his purposes or worship him. He considered this small hunting challenge a fun thing to do. As such, he did not trust his lackeys and fanatics to finish the job that he himself started. He already knew the face of his quarry, from seeing him in the vision stone. He arrived at the manor through the trap door in the library and then found his target. They talked briefly, only so he could verbally state that he was the winner, and that he was the superior being of the two. He tried to charm the party’s patron but failed in doing so. After that he disintegrated him angrily. Only a pile of dust remained.

After visiting the manor, the party might choose to immediately go deep into the tunnels and fight brigands, thieves and eventually Forzekkar. That would be somewhat bold. A wiser group might choose to stay behind and lay low for a few days while collecting information. By talking with the right people, buying beers, offering bribes, or even a forcible interrogation, the party might acquire important information. These are only some ideas: