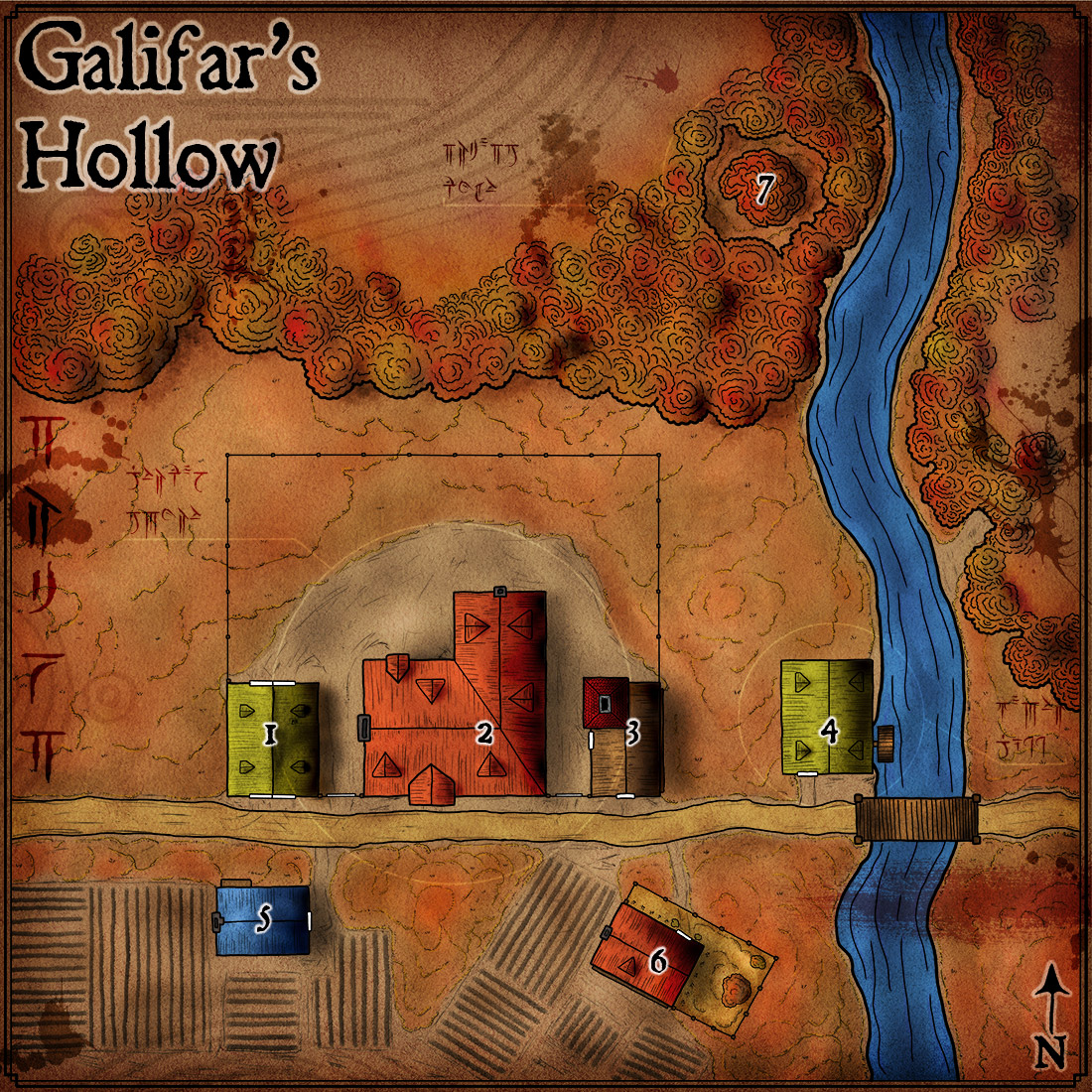 Galifar’s Hollow is a small village that started growing around an inn near Galifar’s Valley, hence the name. It has a shifting population of about 30-40 people. Most of them humans.

It all started some years ago when Mr. Tapper inherited some land near the bridge and was commanded by Duke Herlington to establish his family there and serve as a waypoint and zone of rest for travelers. The path and bridge are used often and there was a growing need for a place to conduct mercantile exchanges that had no need to happen in the city proper, and for a place for travelers to take a well deserved rest.

Mr. Tapper built a spacious two story house. He lives there with his family. The house is also an inn, a tavern and a mercantile shop. Mr. Tapper and his family have become somewhat wealthy and owe all of this to the duke. They are loyal servants and will obey his commands. Over the years, some people have moved closer to this area to reap the riches. A dwarf smith named Palorn opened shop right next to the inn. With Mr tapper’s family help, they all built a stable house on the same side of the path and closed up a small patch of land with a rail fence, creating thus a small complex. Traveler’s now have a warm place to leave their horses and Palorn can tend to them and change their horse shoes.

Later on, two families of farmers settled south of the road. It wasn’t long before a water mill was built right on the riverside. Galifar’s Hollow, as now everybody knows this small place is slowly but steadily growing.

However the land is dangerous, small settlements do not survive long enough to become towns if they do not procure some form of protection. Wolves and thieves is something the village can handle, but bands of brigands, barbaric tribes, orcs or worse are the real dangers. No real threat is imminent for now, but Mr. Tapper has already requested aid from the duke. It is not that the duke has refused to help, but more a matter of size. He doesn’t feel there a justified expense in walling such a small settlement. He’d rather see it grow more before building any kind of protective measures.

Things as peaceful now but there is growing unrest in Galifar’s Hollow because the place is gaining attention day by day.

Mr. Gregorious Tapper.- This man has found himself to be the founder of a village. He’s around forty and feels burdened by the responsibility. All in town consider him the village’s ruler, although he has no formal title or anything.

Mrs. Maria Tapper.- She’s Mr. Tapper’s wife. She tries to help her husband as much as she can but she is of cowardly attitude, always hiding if things get a little complicated. She’d rather just be an Inn owner’s wife.

Palorn.- This dwarf was expelled from his clan a long time ago. He’s a good enough smith for humans, but not up to dwarven reputation. He never cared much for stone craft or metal craft. He was a lover of plants and was expelled for that reason. Following a call from his dreams he arrived to Mr. Tapper’s inn one morning. He kept walking north into the woods and found an enormous tree in a clearing. From the tree trunk emerged a beautiful feminine creature. Palorn pays a visit to this fey spirit every other morning.

Nirania.- This dryad is in love with Palorn. She’s tied to her father tree but it is close enough that she sometimes visits Palorn in his home. They have a big problem. If the village grows more or if a wall is built, the forest is in danger of being destroyed. Specially her tree since it’s so close to the riverside. She and Palorn have been thinking about this for months but have found no answer, specially since the village is bound to grow.

Rammeck the miller.- This man works in the mill. He gets grain from the nearby farms and then runs it through the mill. All in town buy flour from him.

1.- The main conflict in Galifar’s Hollow is the town’s growth and protection vs the protection of the dryad’s forest. PCs can get both missions and choose according to their beliefs. Mr. Tapper can ask them to speak with the duke and convince him to build the wall. While Palorn can reveal the forest’s nature and ask them not to help Mr. Tapper.

2.- While in town after a long day of traveling, the sound of blades breaks the air as a sword fight is heard outside. PCs get out just in time to see a farmer fall under an orc’s scimitar. It’s an orc band that came hiding in the twilight.

3.- Palorn brings the party before the dryad’s tree. Nirania reveals that through her tree senses, she has detected an old foe approaching. She explains that her tree is her prison after a crime in the fey world many centuries ago. An enemy from her past approaches swiftly in the form of evil fey creatures. Maybe dire wolves, pixies, or any beast, as a fey spirit manifestation.

4.- Winter is coming and there has been a tragedy. A pack of goblins came during the night and sacked the winter storage in one of the farms. The only alternatives to survive the cold season is to track the goblins and retrieve the stolen grain, or ask the duke for help.

5.- Mr. Tapper wishes to quit his imaginary position as village chief. If the adventurers have already successfully helped the town fend off some monsters or similar, he will offer to send a letter to the duke. He plans to have a PC appointed chief in town so he can rest. If this happens, the town should become a real nightmare for the PCs.