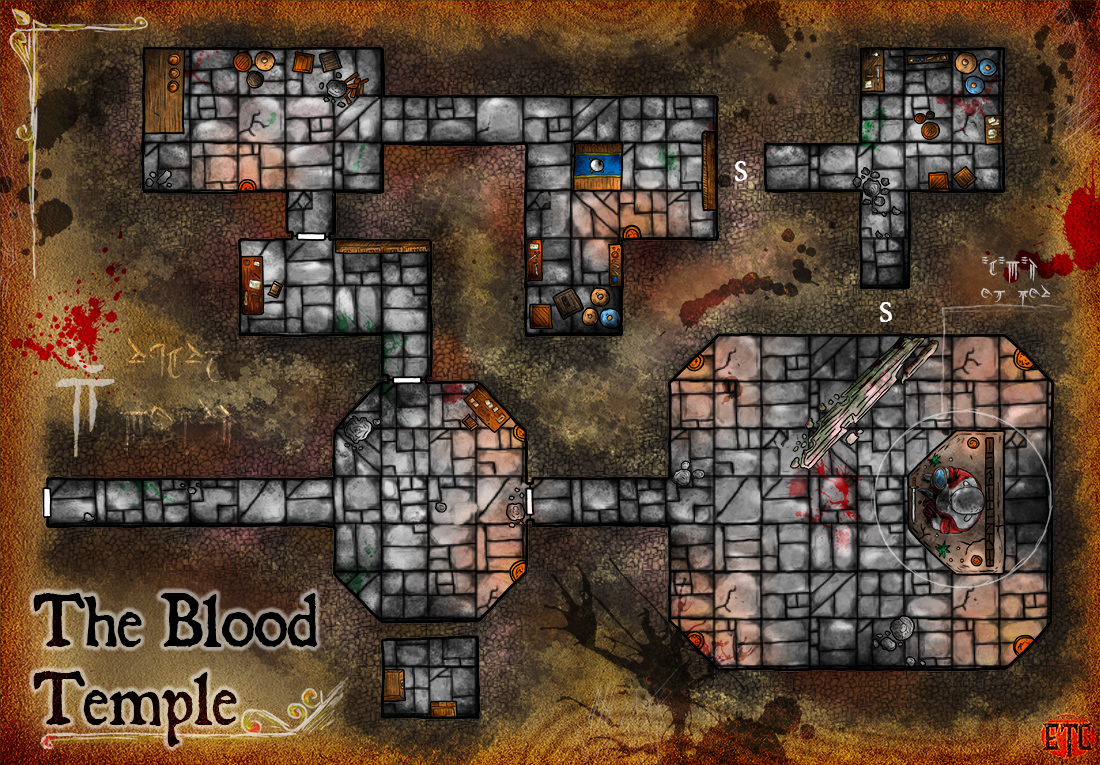 The next game master aid features an underground temple built to a malignant entity from the abyss. In the main room, there is a statue representing said being. The statue is magical and holds a sliver of the archdemon’s power, think of it as an avatar. The statue is placed on top of a rock dais, in front of it, an ancient sword lies waiting for its future owner.

1.- The simplest approach is to simple drop the scenario on top of the PCs. If they are currently exploring an underground complex, they can find a hidden passage that leads to the blood temple. They can find a cave that leads down to it or find an unmarked map that reveals the location of the temple.

2.- A local noble who is considered the best swordsman in the region has come across a forgotten document in the library that shows the location of a temple. Legend has it that the fabled Sword of Blood lies there. The nobleman can either commission the party to retrieve the item for him, or he can hire them as companions and go get the sword with the party.

3.- If you have a campaign where the party is fighting a particular enemy or type of enemies. You can have it revealed that the only weakness your evil boss has, is being harmed by the Sword of Blood (different name if appropriate). You can have a small quest to find out its location, or have an ally NPC deliver the map to the party so they can go and get the weapon.

4.- A wizard who is in possession of a crystal ball has somehow connected his orb to another in an unknown location. Through it he can see an underground room with some boxes, a library and a desk with some weapons on it. He is confident that the location is a demonic temple. He commissions a party of adventurers to go there and retrieve any kind of arcane scripts and scrolls, he is interested in learning magical secrets from them. The wizard can cast a special version of a teleportation spell that can open a portal to the crystal ball in the Blood Temple.

5.- If the players are in need of some important knowledge relevant to your adventure this is a good idea. The more obscure and arcane the knowledge the better. In the main room, the avatar statue is wise beyond measure, having the knowledge of the real archdemon. The avatar loves to chat and pose logic riddles to any visitors when they come to the temple. In exchange of playing a game of riddles or questions, the statue will answer a question. Notice that since the entity is malignant, it will answer but might withheld important details or distort the way the message is conveyed. It could also be that the information is precise, but the answer is given in a riddle or cryptic language.

The underground temple is built in stone. Cryptic texts carved in the walls decorate most chambers.

If deciphered, they tell the story of a mighty being who wished to possess the sun. During millennia it built a device meant to harness the power of the sun. In order to power said device, the blood of 5 angels had to flow through the arcane gears. The mighty entity procured the blood flow of angels to start the machine. He had no qualms about killing such noble celestial creatures. When the device acted, the mighty engineer lost everything. A mortal being as he was, he had no understanding of the underlying rules of the multiverse. The control of suns and planes is reserved to the gods and no one other can access such energies. The machine could not work and instead created a paradox in the fabric of space. It could not syphon the energy of the sun so it syphoned itself and its creators essence down into the very cosmos. The engineer saw himself absorbed and diminished into an infinitely small part of the universe where he became only energy. His strongest attributes where greed, coldness and thirst for more power. As a single point of energy he evolved and eventually became a creature made of those qualities; that was his birth as an archdemon.

This information is not found in a single wall or place. It would take hours of analysis and reading hieroglyphs, bas-reliefs and cryptic runes to understand the whole of the message. There are magical torch sconces forever lit. Their orange-yellow light gives the floor a tinted color.

Depending on the level of the party. Different types of monsters can be used to guard the temple. The place generic enough that it can be adapted to most parties. For low level parties, NPC’s like cultists and guards are appropriate. For other monsters you could use low level undead like skeletons, zombies and shadows.

If you’re using a higher level party (5-10), there are more possible options like wraiths, ghouls and ghasts. You can also use demonic beings like Dretches, Barlguras and Chasme demons.

The main room with the statue should feature a tough fight before the time comes to interact with the avatar. Choose the monsters carefully so you have a difficult battle that really decimates but not destroys the party. Demons are appropriate for this battle because the avatar is of demonic origin.

When the room is cleared, the statue can project its voice telepathically to anyone in the room. What exactly the avatar has to say depends on the adventure hook you’re using and what purpose the statue or the sword have.

As suggested before a riddle in exchange for arcane information, the sword, or just for fun is a fun way to start this encounter. Here are two riddle examples the statue can tell the party:

1.- You walk into a room with an orc holding a piece of meat, a pig eating slop, and a carrion crawler poisoning and eating a mole. Which animal in the room is the smartest?  Answer: “You, hopefully.”

After exchanging riddles, whatever you had prepared for the avatar to tell or give can happen. Alternatively, after complying with the exchange, the avatar can mentally assault the party members to possess them. Choose a Hard save DC for the mental attack (depending on party level) and try to possess a party member. The target most roll a Wis save or be affected as if by the Domination spell.. The objective of the demonic entity is to make the party attack themselves and kill each other. The avatar statue can possess two creatures at the same time with this ability. It can also command them both to act in the same turn if that is the case.