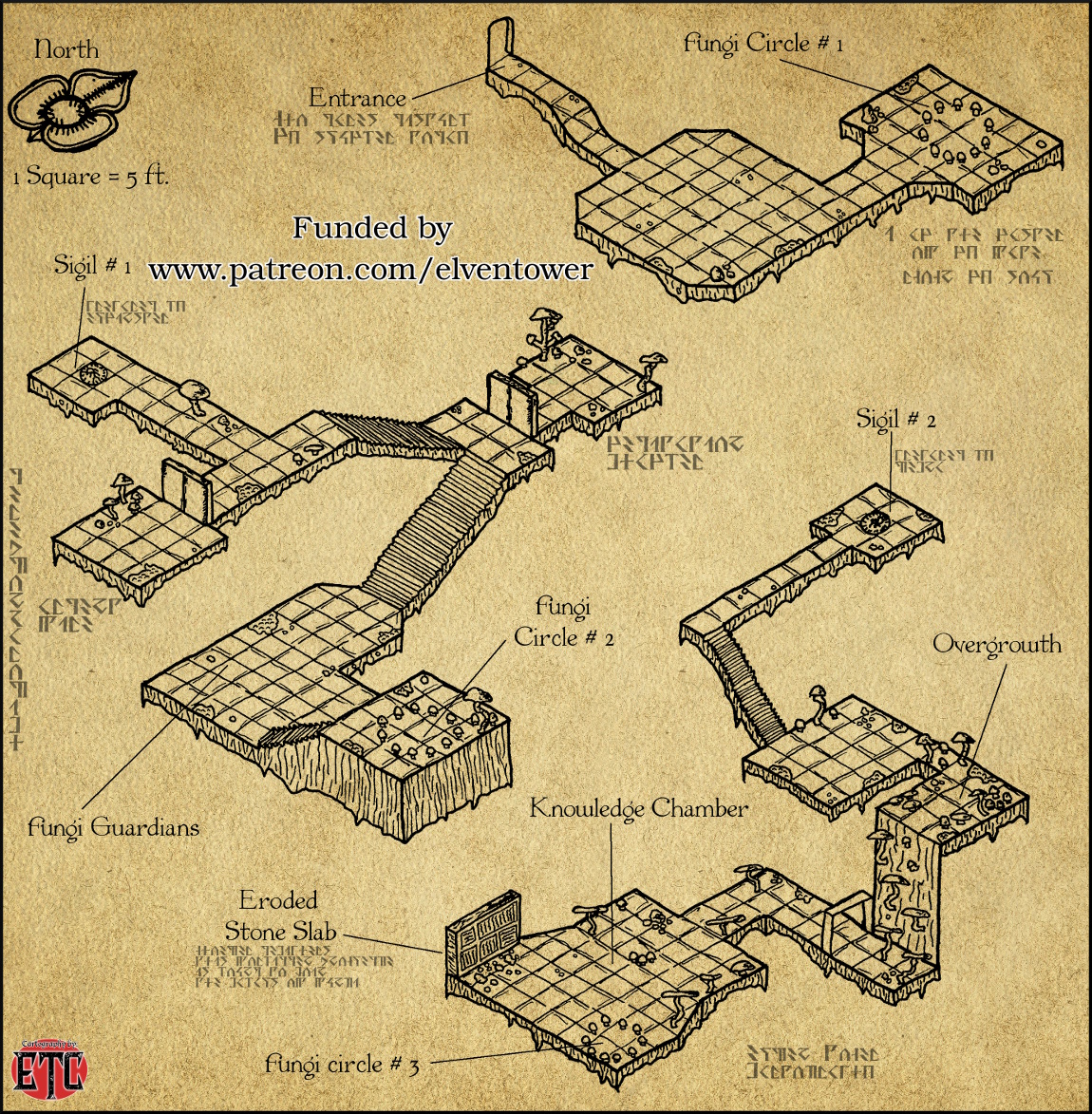 There are myths and legends about fey and faeries traveling far distances in a magical way. Tales talk about faeries walking among overgrowths and fungi patches, and then, when no one is watching, they suddenly disappear. Their vague silhouettes against the moonlight vanish, in an instant they are gone. Common folk believe this ability is innate to fairies but there is nothing farther from the truth.

There is a magical form of traveling that is only accessible to those with the forgotten lore of the myconid lords. A powerful magic that comes in the form of power words, ancient incantations that resonate with the very energy of fungi life. All forms of fungi are interconnected in a web of strands that cannot be seen in the material world. These connections are like shortcuts that exist throughout the feywild plane of existence.

When the words are said correctly while touching a piece of fungus, the creature can fly, so to speak, through the net. It works as an instantaneous transportation device. The creature vanishes, temporarily transported to a dimension of fungi, the place where all the connected strands are. He can then fly across the strands, find another fungus, say the incantation again and return to the material world. Reforming physically in front of the fungus. Enormous distances can be traversed using this method. It is a weapon as much as it is a travel device. A secret well guarded by fey, faeries and myconids.

The only way to gain access to the secret way, is by finding the secret cove at the exact time. It is hidden in the material plane in the center of an old forest. Inside, there is a fey spirit that takes the form of a bear and guards the cave against visitors. In a side room, there is a mushroom circle, this is the pathway that transports visitors to the secret cove. However, its magic is only powered during the summer solstice. Only once a year is the cove accessible.

Inside the cove, a visitor must find and follow the mushroom circles to find the knowledge chamber. In an old eroded stone slab, the magical words of power are carved in old runic language. If the reader is able to decipher their meaning, the ability to access the fungi strand network is revealed. So the myth says…

A hook is needed to propel an adventuring party to an adventure like this. After doing a favor to a fey related creature like a fey, dryad or centaur, the secret cove location can be given as a reward. It could be in oral form or a map to the cove can be given to them. Alternatively, the map to the cove could be found along with other treasure in a different location. Scriptures in such map would be of myconid origin and maybe reveal some of the lore.

The guardians that make more sense to this dungeon are myconids. This would make this a low level adventure, since myconid adults are CR ½. However, myconid sovereigns can create spore servants, which are a form of myconid zombie. Using spore servants along with other fey creatures, this adventure can be bumped up to level 5-ish.

Timing is important in an adventure like this. The cove is only accessible during the summer solstice. Or you can change the date to a different time in your campaign, but it must still be accessible once a year. The players won’t know it, but if they spend more than a day in there, the circle in the first cave-sextion will disappear. They won’t be able to go back there. But if they decipher the runes, they might exit the cove to a different location. DM’s decision. Excellent to send your adventure to a completely different place.

In the first part of the cave, a bear takes guard. It’s a fey spirit that will fight to the death. Standing in the mushroom circle during the solstice is enough to be teleported to the sigil with the same number.

The second section has two rooms with doors. You can populate these rooms with encounters or treasure as you see fit. Good ideas for encounters are myconid sprouts, myconid adults, grey ooze. The room tagged as “fungi guardians” will have a good number of myconid adults who will deter any further exploration.

In the third section of the cove there is a room overgrown with fungi. There’s also a drop on the ground that is 25 ft. high. PCs will have to find a way to go down, probably climbing down the fungi stalks. In the knowledge chamber a myconid sovereign and his warrior myconids will defend the stone slab from being read or destroyed. All these myconids don’t live in the cove. They come once a year to protect any who might have found about the secret entrance.

It’s up to you as a DM how difficult it is to decipher the stone slab. A simple Comprehend Languages spell might be enough. Or you could pair it with a puzzle to decipher the runes. Maybe an arcana check. When the secret of fungi transportation is revealed the party can use the last fungi circle to go back to the entrance of the cave. If more than a day has passed and the solstice is over, the DM can choose the teleport location.

Being able to teleport through fungi patches can easily become overpowered at low levels. Although the secret is real, you can choose to make it, difficult to use or simply inaccessible to the PCs. Maybe it can be done freely, but an Intelligence check is required to exit the strand network where you wish to. Otherwise, the DM chooses the location. Maybe it can be done once a week. Or just maybe, only creatures native to the feywild are able to use it, and the PCs won’t gain this power. Be sure to reward the party in a different way if that is the case.