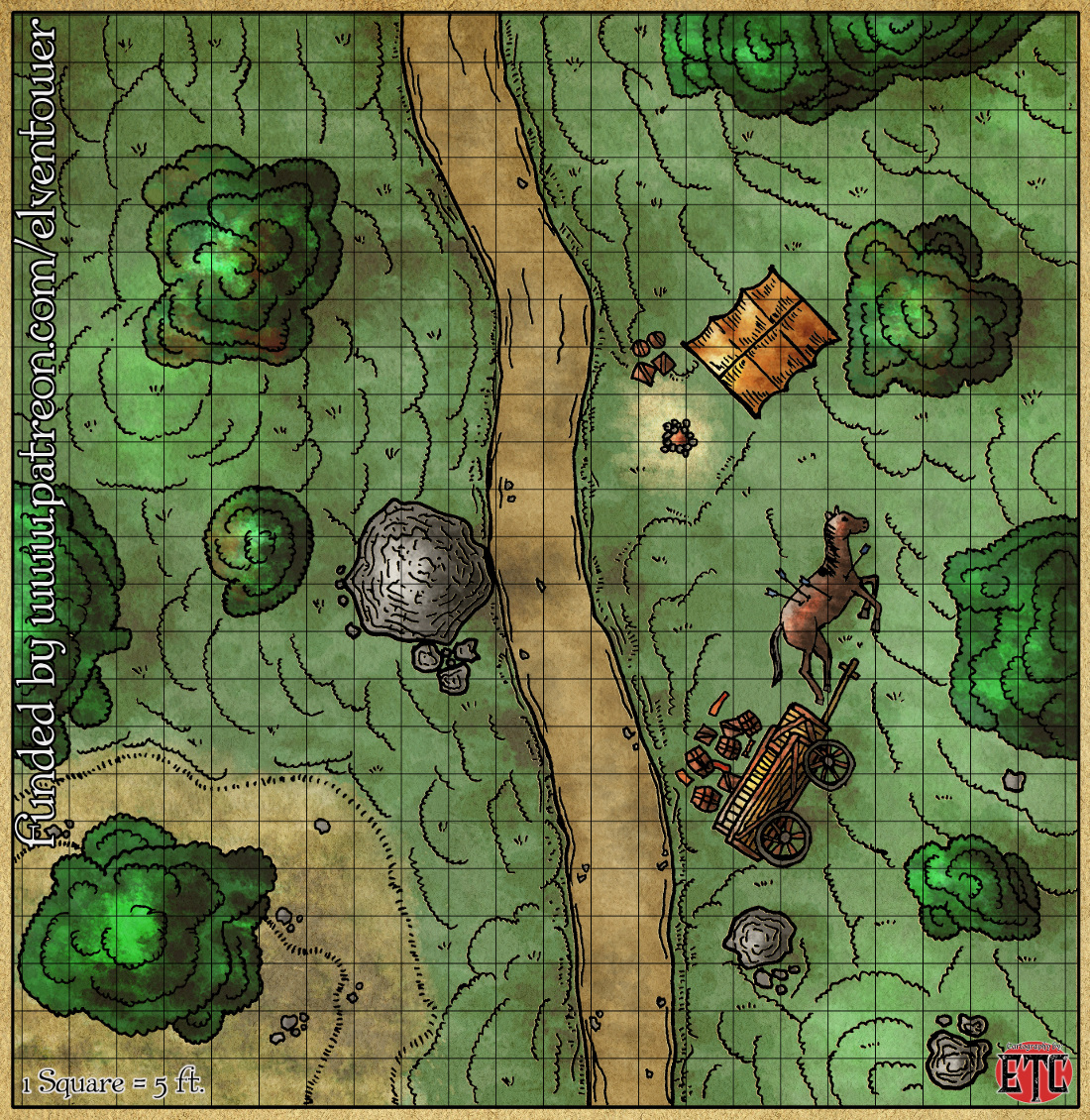 This illustration shows a road where an attack occurred. There is a small camp with one tent and fire. There are some wooden boxes and barrels around. South of the tent, there’s an overturned horse cart, the horse is dead by arrow wounds. Let’s explore four different ways of using an encounter like this.

The group of adventurers are traveling on a lonely road when they are ambushed by a group of savage creatures. They could be orcs, gnolls, mountain barbarians, or similar enemies. First thing they do is shoot the horse to take away the easiest escape from the travelers. The horse jumps while dying and overturns the car, along with the travelers. The PCs are now on the ground, somewhat shielded by the cart, while they await for their attackers.

The PCs are traveling when they hear shouts and battle sounds. As they approach they come to the middle of an ongoing fight. A small group of peasants or farmers are trying to defend from the vicious attacks of savage creatures (as described above), some farmers are already down. PCs can then join the fight to avoid more casualties.

PCs come across a battle/crime scene on the road. The overturned cart and dead horse seem to be very recent but there’s no one to be seen. PCs will have to use their skills and abilities to figure out what happened. They can discover that the attack must have happened in the last hour, judging the horse’s wounds or the dying fire. They can also find the attackers tracks, they go into the forest, where their hideout is. If PCs are fast, they might be able to still save some of them.

A local sellsword guild is hiring mercenaries for an easy job. An important merchant set on a journey the day before. However the merchant’s wife found a threatening letter this morning, she fears for her husband’s life and has hired the guild to send bodyguards. The PCs will travel fast to catch up on the merchant’s cart. When they get there they see the dead horse and everything else. But the merchant and two helper boys are there, unscathed. They explain the orc attack and how a group of elves was coming after them and then were driven off to the woods. In truth, the three of them are doppelgängers and have already disposed of the bodies of the merchant and helper boys. They accept the help and protection. They plan to take the adventurer’s lives and identities that night after dark.