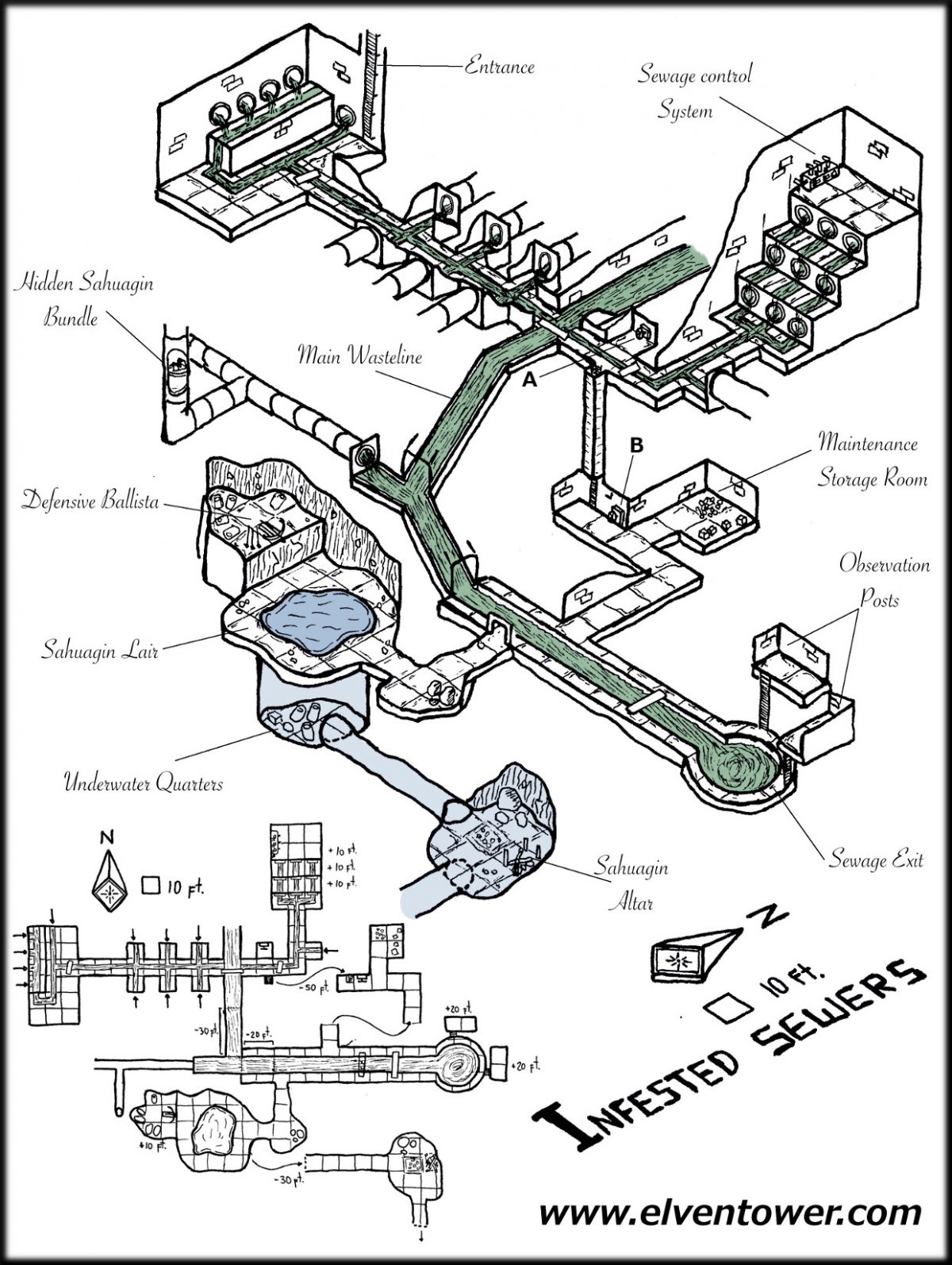 Most peasants and common folk go about their businesses in the big cities, ignoring what happens below the surface. A metropolis would not work if its sewage system did not get rid of water disposal. Depending on the city, a faulty sewage system could cause nasty floods in certain areas of the city, spreading disease and discomfort among the populace.

In the recent weeks, Hightown Sheriff Robb d’Avery has received reports of malfunctions in the sewers, a flood in a common folk neighborhood, and most recently, rumor of fish monsters emerging at night from sewage accesses. He was reluctant to believe such nonsense about monsters, but he is well informed to know that sewage needs maintenance from time to time. Since his period in the position, such labor had not been performed. His response was to commission a group of laborers to go down and unclog the system. They didn’t return. The workers were known among to population, the situations is causing unrest. No laborer wanted to risk their lives trying to unclog or clean the dangerous pipes, so the sheriff was forced to put up an announcement to hire any adventurer or sellsword who would want to earn some coin.

The real problem is a tribe of evil Sahuagin who found its way into the city’s sewers. They are cruel and don’t hesitate to attack and kill anyone who approaches their lair. They can swim in any of the sewers waterways unimpeded. They have learn how to crudely manipulate some of the sewers controls to their advantage, although in their learning how to do so, they have caused the recent floods. The tribe leader, Gush-Loo-Brask, a sahuagin baron, has correctly guessed, that the more they manipulate the controls, the more surfacers will come down to find out what’s going on. The remains of the most recent visit, the maintenance laborers, are in the maintenance storage room.

Waterways.- The sewers are dangerous, the narrow waterways do not have strong force, they are waist deep and are considered difficult terrain for creatures without swimming speed. The water is opaque, if a sahuagin dives through the water he is completely obscured. They use this tactics to sneak around their prey, emerging to attack with their spears. The main waste-line is a recollection many smaller streams. Water moves fast down this line and it’s dangerous for creatures without swimming speed. Controls A and B can be used to reduce the strength of this waterway. By default, a creature in the water is pushed down the line, unless he succeeds on a Strength (athletics) check (DC 18). This DC is reduced to 14 if control A is activated, and to 10 if control B is used too. Each round the check is failed, the creature is pushed down the line 30ft. If the check succeeds, the creature is hanging from the side, on the next round he can attempt the check again to climb it. Sahuagin are unaffected by this effect, but their swimming speed is increased to 60ft if swimming downstream. If a creature without swimming speed is carried to the end of the line, the sewage exit, he is sucked down to the natural water deposits under the city, unless he can breathe under water, he will drown.

Sahuagin Encounters.- At any point in the sewers, the PCs can be ambushed by sahuagin lurking in the waters. Normal lurking band: 1d6+2 Sahuagin and one Sahuagin Priestess. If the encounter occurs near the Main Waste-line, a swarm of quippers is waiting in the water for PCs who might fall.

Sewage control system.- This room contains a gear machine that controls the entrance flow of pipes coming from different parts of the city. Manipulating this device is what caused the floods. When the party enters this room, a team of Sahuagin are waiting for them. All the pipes are in a closed state. Sahuagin on the top platform can use the machine to release the water from one of the pipes, they use this as a weapon. The attack works like a line area attack, with a range of 30ft. Water is released at such pressure that it hits you like a stone. Any creature in the water path most roll a Dex save (DC 15) or take 4d6 bludgeoning damage and be pushed 20ft. Creatures that succeed on the save take half damage and are not pushed. Sahuagin losing this fight can simply jump to the waterways to escape; unless they have less than HP, which triggers their blood frenzy.

Hidden Bundle.- This is treasure, hidden by the sahuagin, it’s inaccessible unless both sewage pressure controls, A and B are turned off. This treasure was hidden by a greedy sahuagin who did not want to give it to the baron.

Sahuagin Lair.- The rest of the sahuagin tribe is in the lair. The baron will defend the lair with his life and the ones of his followers. He doesn’t run, and other sahuagin will not dare show cowardice in front of him, so everyone fights to the death If the baron is killed, any remaining sahuagin who are not in blood frenzy will swim away. Gush-Loo-Brask carries a cloak of protection and a +1 magical trident, increasing his AC, attack and damage by +1.

Treasure: Cloak of protection, Trident +1. All over the lair and the underground quarters, there are craftsmanship art objects, coins and gems that can be exchanged for gold: 6d6 x 100gp, 3d6 gems (10gp each) 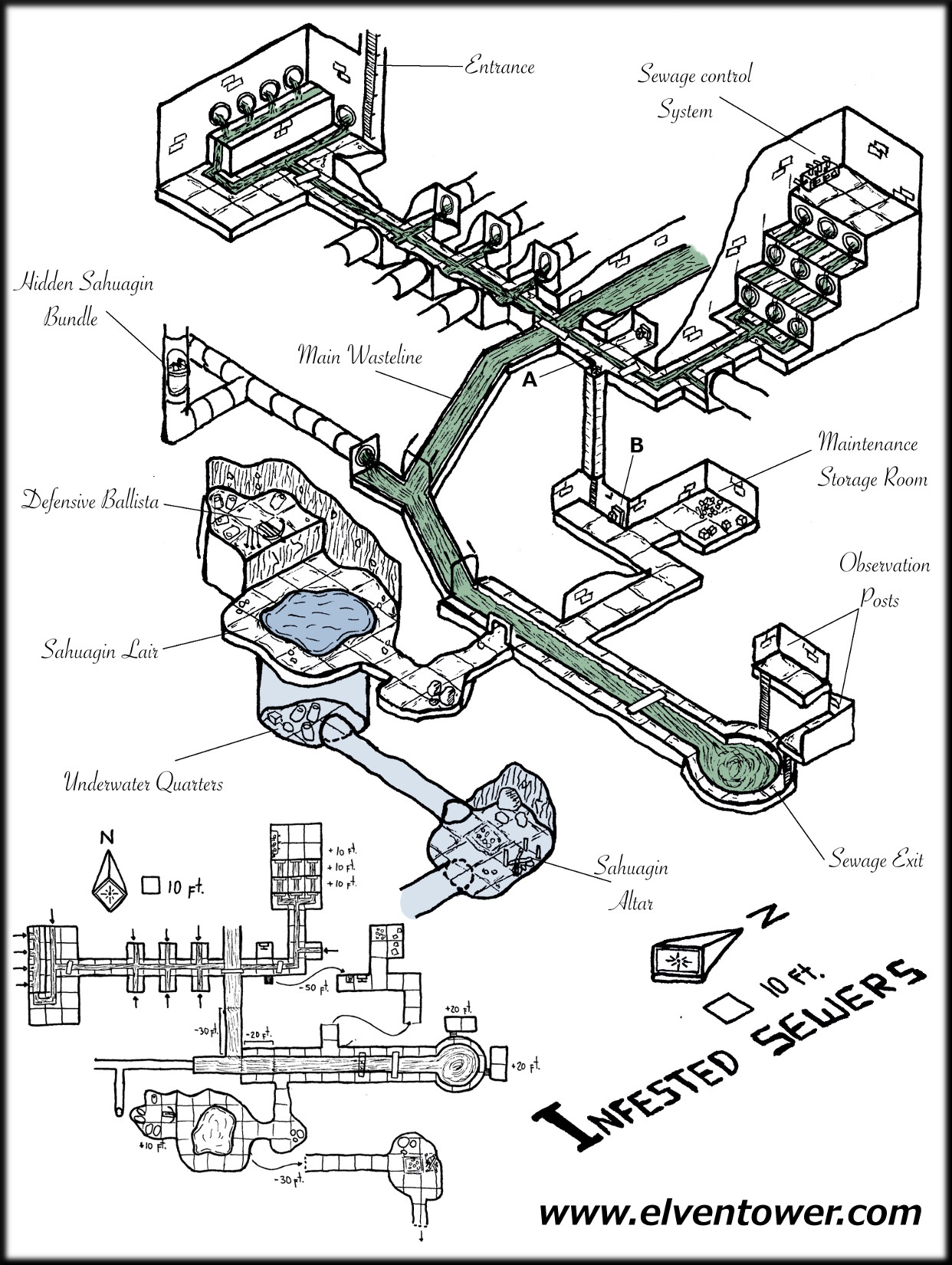