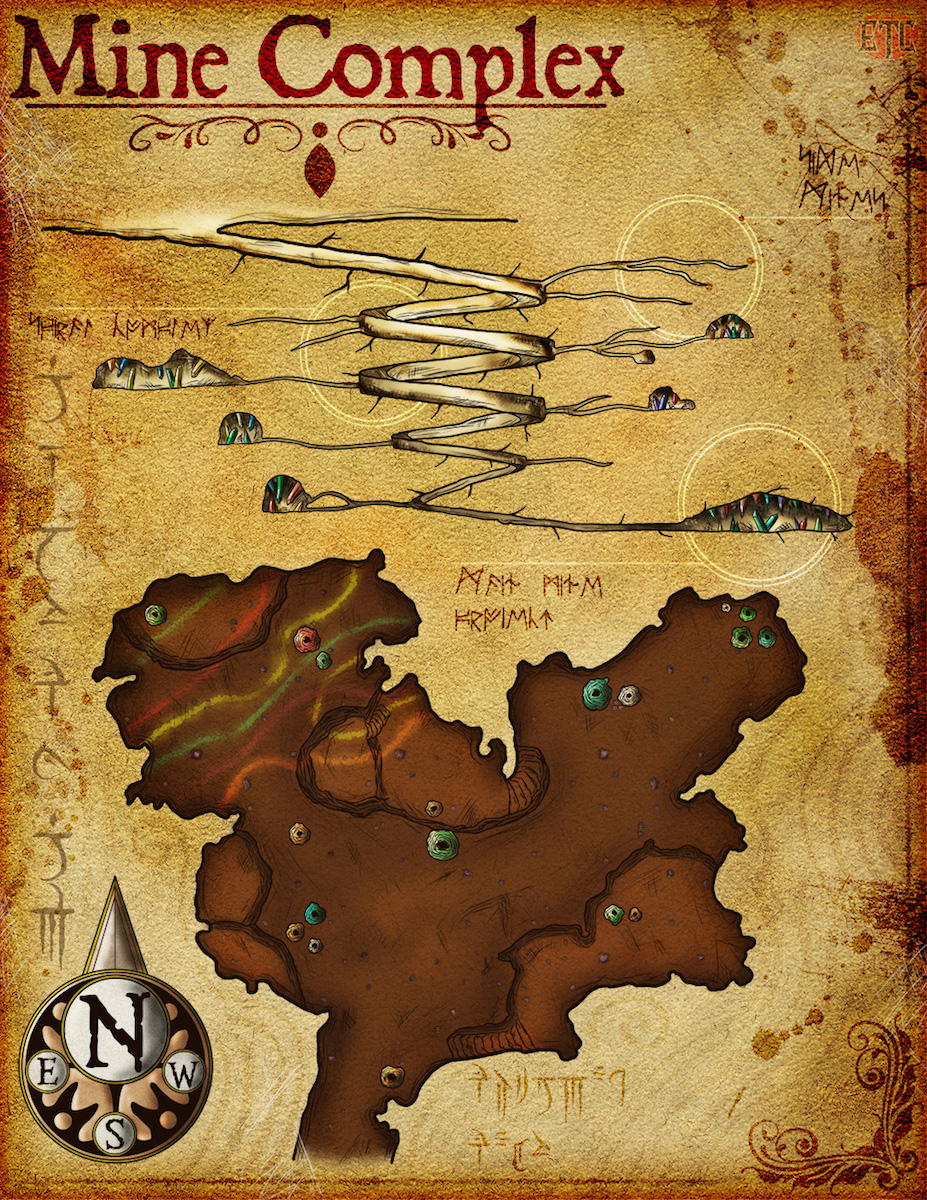 Lord Maegh is one of the wealthiest men in the county; surpassed only by the rich spice merchant lords. House Maegh has enjoyed a wealthy and lavish lifestyle for the last 4 or 5 generations due to their holding of a very rich iron mine. Discovered by accident, a large iron vein is mined day after day by House Maegh’s subjects.

The current Lord, Richard Maegh inherited the mine and it’s produce when hi father died a few years ago. He holds dreams of greater wealth and thus, as soon as he came into possession of the mine, began expansion projects and doubled the number of laborers working in the mines. He extended an open invitation to neighboring towns and villages for laborers, he offer a fair pay. In less than a month, he had half the county working for him mining as much iron as was humanly possible.

The mine ran deep inside the earth, they used a spiral architecture for the main mine tunnel. It facilitated the transit of coal carts and overall movement inside the mine.
The deeper they dug, the more often they found crystal formations in underground chambers. Some chambers were so full of crystals of different colors that they formed enormous geodes. Some sages analyzed the crystals and concluded that they were all formed from different minerals. Some of them were harder than others but none of them held any intrinsic value, so they were mostly ignored by the miners when found. It was noted that the deeper the crystals were found, the more possible it was for them to be luminescent. The radiated a warm light tinted by the crystal’s own color. The sages explained that was caused by faerzress, a type of underground radiation that is only found in the underdark. They also said it was not supposed to be dangerous, unless any magic was used near it; reports of magic malfunctioning due to faerzress are known but not thoroughly documented.

A week ago something happened deep in the mine. A large crystal filled chamber was recently discovered and is being mined since it directly touches the iron vein. Miners came back that day with high fevers. Their skins were also tinted bright in different colors. Blood doctors are tending to the sick miners, draining the contaminated blood inside them. Close to sunset, the remaining miners got out of the complex in a hurry, carrying several wounded and death miners with them. Something attacked them down there from the darkness. The ones that were close to the incident report to have heard a kind of explosion and a cave-in. something came out from below, some creature from the underdark. And the faerzress in the cave lit bright the moment it happened.

The illustration features the large chamber at the end of the mine tunnel, but there are other side caves (secondary caves) that are perfect for some random encounters before a big fight. So in the end it’s best to assume that a group of creatures came forth from the underdark. It could have been a drow raiding party, a hook horror pack or similar.

The faerzress is known to cause magical mishaps. Anytime a spell is cast inside one of the crystal chambers roll a D20, if a one comes up, then roll in the Wild Surge table in page 98 of the Player’s Handbook. In case you’re not playing DnD 5e, then just narrate how the spell doesn’t work or has an unintended effect or consequence.