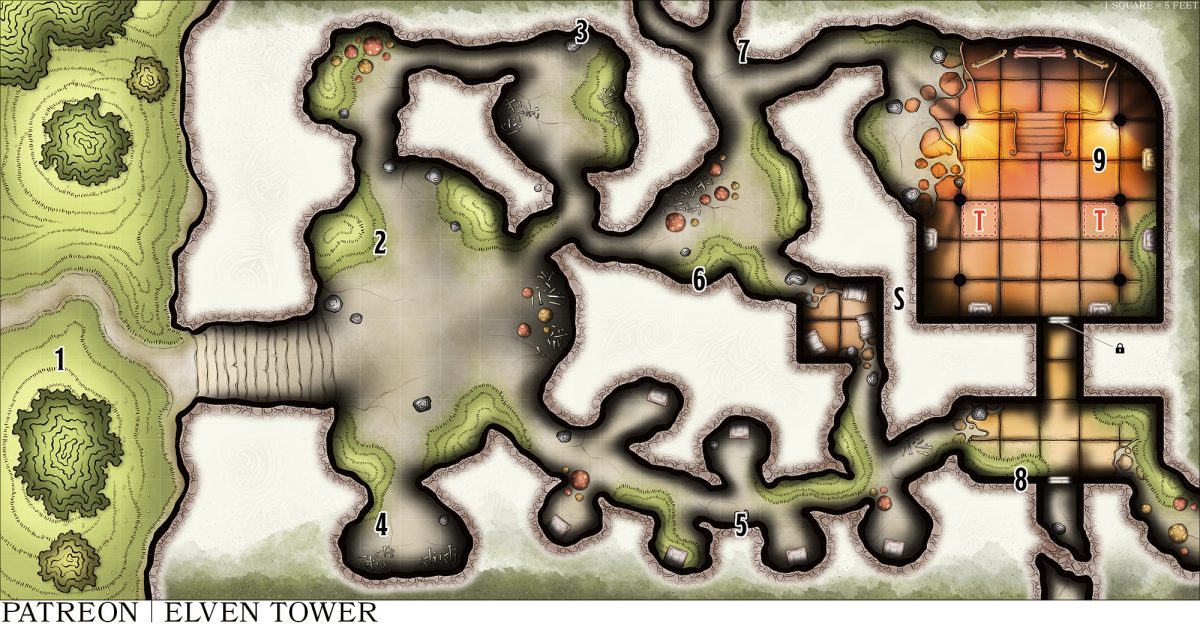 Thousands of years ago, a covenant of elvish researchers and mages devoted centuries of their lifetimes to the study of the past. Their primary goal was to find a way to open a channel of communication with the ancient past. At first, their goal was purely academic. But as they made progress with the study of time, they discovered that through chronomancy, they would be able to send information to the past. Maybe even physically travel to old timelines. But that was deemed dangerous.

The chronomancer elves built three magical mirrors that would allow them such time-bending deeds. They were named after Adarael Gath, the leader of the elvish covenant. The Mirrors of Gath are three exquisite artifacts with intricate golden frames. They were designed to serve as doors to the present and past. The central mirror is the largest and would allow for physical travel, like an arcane gate. The side mirrors permitted the elves to glimpse past timelines and send messages.

The Mirrors of Gath had one limitation, they could only reach a past as remote enough as their creation. Thus, the chronomancer elves placed them in a vault designed to withstand the passage of time and left. They planned to return after 10,000 years to finally try out the mirrors’ power. Alas, the chronomancers’ fate is unknown. They never returned to use the Mirrors of Gath.

In the past 12,000 years, many creatures have stumbled upon the underground compound and have interacted with the mirrors. The mirrors have captured those interactions and, in some cases, individuals have waked into the central mirror, never to be seen again. The mirrors are powerful artifacts but their functioning is imperfect. The chronomancers never had a chance to perfect their creation. Now the mirrors may pose a threat.

The Echoes of Yore

The fundamental nature of the mirrors cannot be known. Even its creators knew they meddled with forces that cannot entirely be controlled. The Mirrors of Gath changed their behavior a year ago. Since then, echoes from the past are displayed on their surfaces; interactions with creatures from up to 12,000 years ago. At times, people or creatures emerge from the central mirror in a haze of confusion. From their perspective, they have traveled to the future. These people have visited Mossgood Town and caused curiosity to the locals who cannot understand the visitors’ words or their origin. Some of the visitors have become aggressive too.

Unfortunately, the imperfect magic of the Mirrors of Gath cannot sustain their bodies for long. Most visitors last a few weeks. After that, they decompose into inert matter. It is impossible to know whether they return safely or they perish. An exception is an ancient man called Apoktek, who has hid in the caverns for a year.

There are records of at least twenty strange visitors that appeared in the last year. Most of them could not make themselves understood before vanishing. Scholars could translate some of the languages and claim that those variants are so ancient no one speaks them anymore. From the visitors’ outlandish claims, scholars say that they may come from the distant past. A few of them became insane from the time-travel ordeal. One of the visitors killed seven individuals in Mossgood Town three months ago before he could be stopped.

Local authorities offer a reward of 1,000 gp for tracking the visitors’ origin, unveiling the truth of their appearances, and putting a stop to the puzzling events.

The following features correspond to the caverns and mirrors’ vault; areas 1 through 9.

Smell. The fungi in the caverns produce a musty stench that dumbs the senses. Creatures have disadvantage on Wisdom related checks (DC 14 Constitution).

The tracks of the strange visitors lead to a barely used forest trail. It leads to a dark cavern entrance on the side of a hill with rock outcroppings.

The entrance to the caves is located a four-hour walk from Mossgood Town. The townsfolk point the characters in the right direction. A tracker finds footprints of six different people (DC 14 Survival). The most recent are a few days old and belong to Apoktek (see area 3).

The large cavern’s roof is 30 feet tall. 4-foot-long stalactites threaten to reach the ground. A hunter distinguishes evidence of honey badgers from tufts of fur and footprints (DC 14 Survival). They all come from the south.

The walls of this natural cavern are etched with primitive images of a man traveling through a rectangular gate. Small animal bones litter the cave.

Apoktek (berserker) has lived in this chamber for a year. He is a reclusive hermit who avoids the company of modern humans. He dresses in cured leather, his hair is long and muddy, and he carries a nose-wrinkling stench.

Apoktek hides by a corner and attempts to flee if threatened. His language is so ancient no one alive speaks it anymore. He only fights in self-defense.

An Unlikely Alliance. If a spellcaster uses magic to communicate with Apoktek, the man is happy to be understood. He tells a tale of how he wandered into a large elvish vault and walked into a glowing mirror. Since then he is stranded in this world where no one speaks his tongue. Apoktek is unaware of his journey through time. He thinks he is in a different part of the world. If the characters allow it, he wants to tag along to see the mirrors again. Apoktek fears fighting the timeless guardians that guard the mirrors’ chamber by himself.

The pungent stench of animal musk invades the senses in this chamber. There are tufts of thick black fur stuck on rocks and the walls.

A family of four giant badgers inhabits this cave. They are territorial by nature. The fearless animals fight for their cave but retreat if the invaders leave them be.

5. Tomb of the Six Knights

Six roughly-carved alcoves flank this long tunnel. Each alcove contains a stone box with an inscription written in an old form of the Common tongue.

A comprehend languages spell reveals that the people buried here were knights who fought in the War of Roses, almost a thousand years ago (DC 14 History). The six war heroes were interred here long before the caverns became connected with the chronomancers’ vault.

Treasure. The niches contain 250 gp and 800 sp. Depriving the dead of their belongings comes with a curse: only half the hit points are regained from any healing sources. A remove curse spell or by returning the stolen valuables to the niches removes this affliction.

A bed of corroded bones lies scattered among several fungus lifeforms that move as if breathing. The fungal stench is strongest in this area.

The 3-foot-tall fungal growths in this chamber are semi-conscious creatures known as myconids. They cannot help but obey their desire to consume all living matter around them. Three myconids uproot themselves when the characters approach; they attack. They do not pursue farther than 30 feet. If Apoktek is present, he warns the characters of the danger and suggests circling around this area through the knights’ tombs in area 5.

Treasure. The four chests are unlocked. They contain 740 gp, 1,300 sp, a +1 dagger, and a platinum crown that had seven one-inch wide gemstones removed. Apoktek has the seven emeralds in his fur coat.

7. Tunnels to the Depths

Two tunnels to the north slant downward into uncharted depths. Human footprints lead down this path but none appear to have returned as of yet.

If Apoktek is present, he tries to explain that other visitors came from the mirror and walked down the caves but did not return. Apoktek has explored half a mile down the caves and found the hunting grounds of aggressive troglodytes. Apoktek never went down there again.

These tunnels lead down to the uncharted depths underground. Such a journey to the cities in the Underworld below is an adventure for another time.

The chamber was part of a once larger underground compound. Little of it remains. The walls are decorated with eroded bas-reliefs of elves performing rituals and observing the stars.

The reliefs on the walls and ceiling tell the stories of the elvish chronomancers and their millennium-sparing objective in studying how to manipulate time. Insightful people can analyze the room for 30 minutes and learn about the chronomancers and the Mirrors of Gath (DC 16 Arcana). They learn how the visitors are real individuals from the past but also that the mirrors are imperfect.

Recent Visitors. Four teenagers (commoners) hide in this chamber. They emerged from the Mirrors of Gath three days ago and barricaded the door to area 9. The lads come from 400 years ago and speak a dead tongue. They fight only in self-defense. The teenagers have only ten days left before they too vanish into nothingness.

9. The Mirrors of Gath

Three tall mirrors rest by the north end of this chamber. Within them, the depths of the universe await. Glimpses of other places shine from time to time. Voices from the past make the air vibrate.

The three mirror relics stand by the north wall of this chamber. Their interiors shine with the light of other worlds. Bones lie scattered across the chamber; evidence of past visitors who could not move past the timeless guardians that guard the chamber. If Apoktek is present, he helps fight the undead guardians in the room so he can inspect the Mirrors of Gath later.

The Timeless Guardians. Five ghouls in chainmail armor emerge from the standing sarcophagi to protect the Mirrors of Gath. They are mindless abominations who attack any non-elf creature. If destroyed, they reform in 48 hours. Destroying the sarcophagi prevents this effect.

The Mirrors. Understanding the mirrors is a great arcane feat. Only the most capable mages could dream to achieve this. Images from other times are glimpsed. Voices and echoes from the past vibrate through the chamber every few minutes; they’re voices in dead tongues and indecipherable accents. The mirrors are indestructible and cannot be moved from the chamber.

Unlike other visitors, Apoktek’s presence in the current timeline is not a temporal affair. He has been stranded for the last year in the caverns next to the Mirrors of Gath. He comes from 12,000 years in the past.

Apoktek was the leader of his tribe and feels a strong sense of responsibility to return. In his culture, precious stones are considered sacred. He took seven emeralds from area 6 and considers them a lucky charm.

Manner. The ancient man nature requires him to gesticulate and move his hands in wide movements.

Ambition. Apoktek wants to find a way back to his tribe and take the glowing emeralds from area 6 with him. 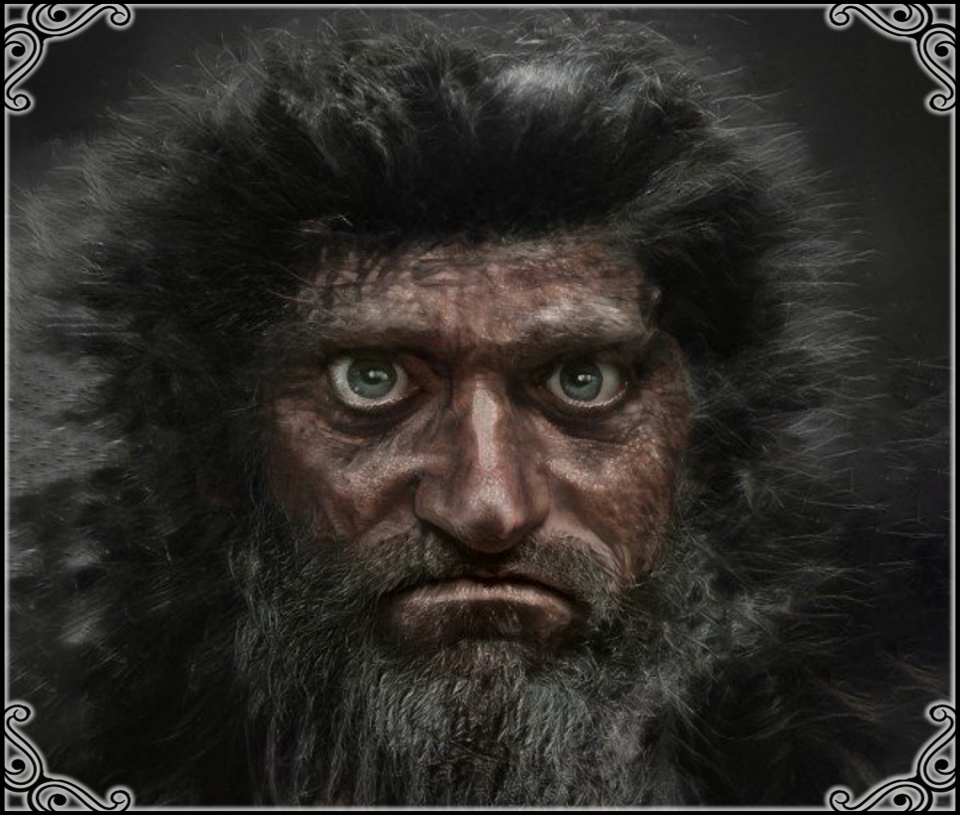 The characters have access to the Mirrors of Gath. A spellcaster can study the mirrors and the bas-reliefs in areas 8 and 9 to gain a passing understanding of how they work. Studying the mirrors for two consecutive weeks allows a character to spend a spell slot to deactivate the mirrors. This prevents the arrival of other visitors, at least until the mirrors stop being dormant.

Before deactivating the mirrors, a spellcaster can attempt to open a portal to a previous timeline to allow either Apoktek or the four teenagers to return to their time. Unfortunately, there is no way to know for sure whether they made it back safely or to the correct time.

Back to the Past

The characters can attempt a journey to the past. Such a journey should be important in the great scheme of things for the current campaign. They can travel up to 12,000 years to the past. They have the chance to correct a mistake, save the life of a loved one, or prevent a catastrophe from happening. The consequences of changing the past shall hunt them later on, though. 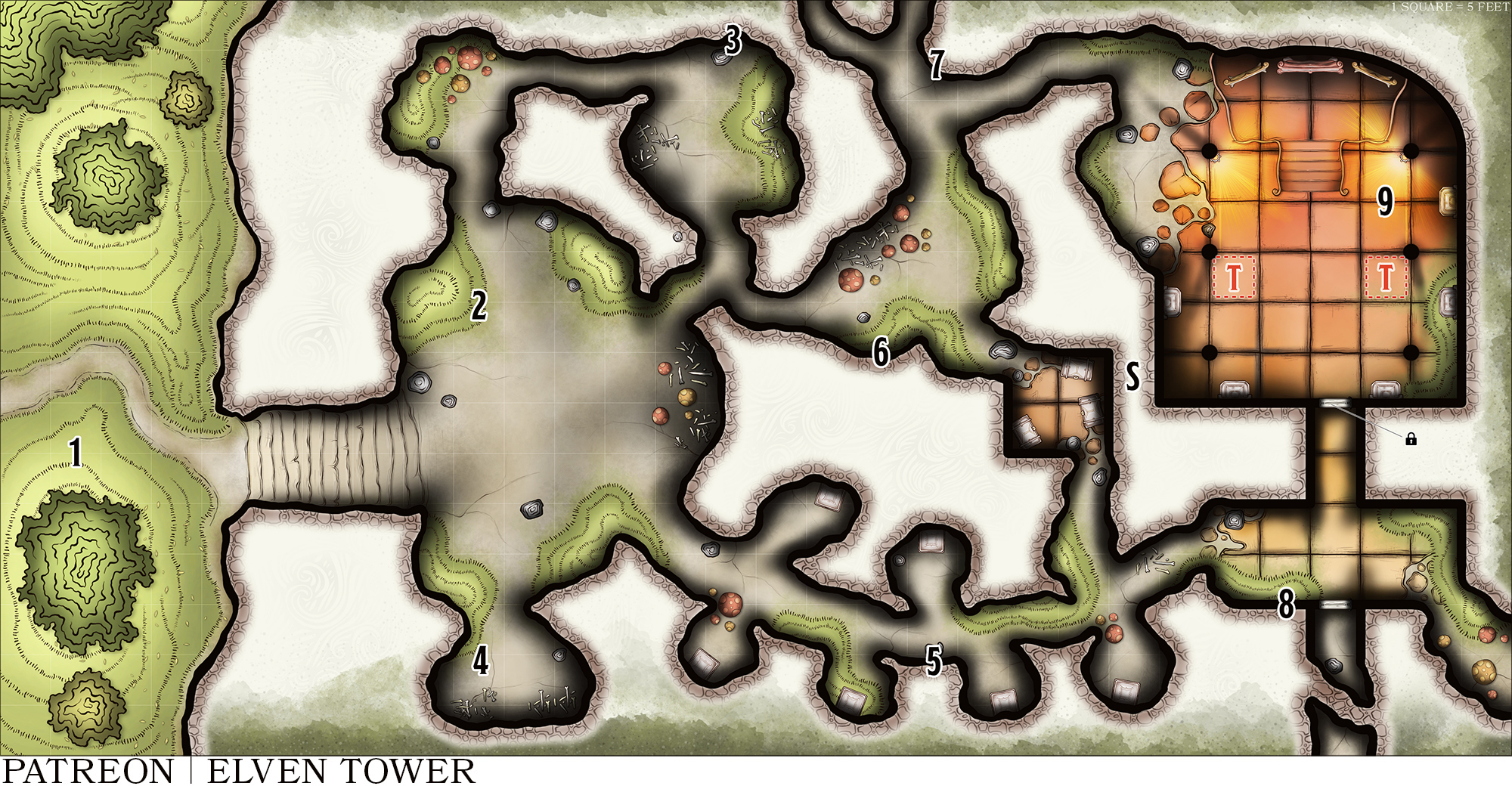