I consider this chapter a gem in the Curse of Strahd module. It is well presented, with some interesting characters, and if the adventurers wish to complete this chapter, they will have to infiltrate Castle Ravenloft to steal from under Strahd’s nose and escape to tell the tale.

Argynvost was a silver dragon who moved into the Valley of Barovia disguised as a wealthy man. He was incredible wealthy, had his mansion built and used his resources to attract valorous champions of good to start a knight’s order. It’s explained (page 129) that Argynvost was aware of the Amber Temple, a place of great evil. He made one of his order’s quests, to make sure whatever was in that temple would never be allowed to escape.

Years later Strahd’s army came to the valley and the Order of the Silver Dragon defended the valley (the name wasn’t Barovia yet), not because of allegiance or loyalty, but to protect the Amber Temple from outsiders. Unfortunately, Strahd’s army was much too powerful and they overcame the order. Even with the help of Argynvost in dragon form, they simply had no chance. After killing Argynvost, Strahd had his corpse stripped to the bone and the enormous skull transported to his camp. Years later, after the construction of Castle Ravenloft, the skull was set as a trophy in a dinning room for the barracks under the castle.

Since then the spirit of Argynvost has lost its power and what remains is just his will to rest for eternity, thus requiring his skull to be placed in the mausoleum in his back yard, area Q16 (page 134).

In the meanwhile, such was Vladimir Horngaard’s hate, that he came back as a revenant and brought back with him a small number of other knights as revenants, he is their master and they obey him. Vladimir is only around to ensure that Strahd suffers as most as possible. Their main activities consist in killing Strahd’s lackeys, creatures and adventurers from time to time (Vladimir is aware that more often than not, adventurers are brought as Strahd’s playthings or pet projects, so killing them is another way to torment Strahd.

Several NPC throughout the module have a mention for Argynvostholt in their information boxes. The first such info-dump comes actually from the hag Morgana in the Town of Barovia (page 48). If stopped from stealing a child, she offers information in exchange of her escape. She tells a story of a group of revenants in a ruined mansion west of Vallaki. She also mentions they are enemies of Strahd.

It works as an info hook, specially if the adventurers get it from different sources. A closer approach is to have a lone revenant “random” encounter (page 31). Although it can be mistaken for a zombie and end up as a regular battle. If the adventurers present themselves as enemies of Strahd, the revenant will not attack, and recommend they go to Argynvostholt and speak with the current leader of their order Vladimir. It even says the revenant can lead them to the ruined mansion.

Argynvostholt is a ruin of its once glorious state. In its time it was the must luxurious place in the valley, thanks to Argynvost’s gold. Some rooms are caved in with only rocks and ruined furniture inside, exposed to the elements. Some have become the lairs of monsters like the colony of giant spiders in area Q4.

Throughout the mansion, the adventurers will see portraits and images of Argynvost as he looked in human form. It is for the players to infer that this person is actually the dragon himself.

There is a particular scene in the mansion with TPK potential, it’s area Q13, the chapel (page 134) Three revenants roam inside and will attack any who enters the room, no questions. Revenants are very tough as they are but these come armed with swords that deal (2d10+4) damage. Serious business here.

He was the second in command when Argynvost was still alive and the most faithful knight of the order. After the death of Argynvost he came back to life as a revenant, vowing to end Strahd’s life. He and the other revenants marched to Ravenloft to fight Strahd but were confronted by Madam Eva, who told them that Strahd had died already, becoming powerful but forever trapped inside his small realm. Vladimir was in love with a fellow knight, Sir Godfrey Gwylim (also dead). However, in his current state, Vladimir no longer remembers him and can only think about Strahd. The order has been diminished to a shadow of what it once was. No other knight can do anything because Vladimir is in charge. Vladimir won’t change his mind voluntarily, only the lit beacon of Argynvost can make them see the real picture.

Vladimir is a very interesting character, he shares the PCs enemy (Strahd). But his course of action is the opposite of what the PCs probably want. He explains this in his kick ass speech in page 138. He knows Strahd is dead and forever cursed. No one has ever been able to kill Strahd, but it is assumed that if he’s ever killed, his spirit will be finally at rest. Vladimir would hate such an ending. For Vladimir that is too cheap an exit for Strahd’s sins. He knows that his current state, trapped and cursed to wish for Tatyana’s spirit but never achieving his goal, is the worst hell possible. Killing Strahd is contrary to Vladimir’s goals as stated in his bio (page 242).

This makes for excellent roleplaying opportunities. When the adventurers come across Vladimir in area Q36 (page 138) they can exchange ideas. If the PCs declare themselves enemies of Strahd, Vladimir shares their goal and will commend them to hunt his allies and creatures. If the PCs ever mention their intention to slay the vampire, Vladimir warns them to stay out of the order’s mission to ensure the vampire’s eternal damnation. The PCs will probably sabotage themselves here and turn Vladimir against them. With a 20 damage sword swing he could really scare them off in a second. Specially if they come hurt from the fight in the chapel. Vladimir’s got one of the few magical weapons in the module, a +2 greatsword. If the PCs decide to fight Vladimir, it is a tough fight, he’s damage output is dangerous. Plus, a group of phantom warriors will aid him. Vladimir can afford to fight to the death because he knows he will rise again in a matter of days. Momentarily however, he would lose his powerful sword. 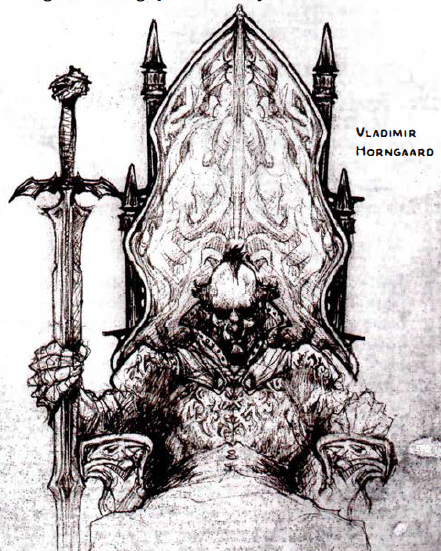 In area Q37 (page 139) there’s a room where 5 other revenants wait for Vladimir’s orders. There’s not a given number for the revenants in Barovia, but it is implied there are more roaming around killing monsters. They mostly ignore the PCs because they won’t attack without an express order from Vladimir. Although the PCs may have just fought Vladimir in the room across the hall, the revenants wouldn’t move to help Vladimir unless a direct order was issued. Just like Vladimir they don’t care if Vladimir is killed. One of the knights is Sir Godfrey, Vladimir’s late lover. He is lawful evil like the rest of them and can’t remember his love for Vladimir, but he can sense the unrest of Argynvost’s spirit. He can tell them about the dragon’s demise and how that affected Vladimir to the point of returning from the grave. He can’t help the party in any way because he is bound to his allegiance and must follow orders.

The real nature of Argynvost’s quest is revealed in area Q40 (page 140). This is Argynvost’s study and the access room to his vault. The vault was full with great treasures and his study included thousands of gold coins worth of books. All this was taken a long time ago, part of the treasure and library are now in Strahd’s castle.

The PCs will find the last page of Argynvost’s Journal here (handout, page 256). It’s a small letter where the dragon states he is ready to die fighting for the ideals of the order. The PCs also get to see a picture of the mansion in its better days, where the beacon on top of the chapel tower glows bright. Now the book states that a spell-like effect causes an illusion of Argynvost to tell the adventurers about his skull in the basements of Ravenloft. My advice is to change it a little and have the real ghost of Argynvost tell them this, in this way the PCs can exchange words with Argynvost himself and the quest becomes more important.

The party level may vary here, but the odds are the same. They have to infiltrate the castle, go to the basement, find the skull, and carry it back out. The skull lies in area K67 (page 78) and it weights 250 pounds. After that, they need to travel back to Argynvostholt and place the skull in the mausoleum.

Doing that will light the beacon, this has two benefits: +1 to AC and saving throws. And it will also lay the revenants’ spirits to eternal rest (Except Sir Godfrey if he is the appointed ally against Strahd).

As soon as the beacon is lit, the spirits of the knights abandon their revenant bodies and enter the afterlife. Not a great ending. My advice is that, when the adventurers exit the mausoleum after placing the skull there, the host of knight ghosts are waiting for them in the cemetery Q15, in incorporeal form. Vladimir, now free of hatred, his memories restored, can thank the adventurers for bringing light and hope to their hearts and to Barovia. The PCs are free to exchange a few words before Vladimir and Sir Godfrey embrace, hold hands and float away to the after life, with the rest of the revenants’ spirits (unless Sir Godfrey is the Ally, in that case he remains as a revenant until the campaign ends).

This quest is dangerous and should be awarded with a level-up for the party. As suggested at the beginning of the book, it’s a great milestone.