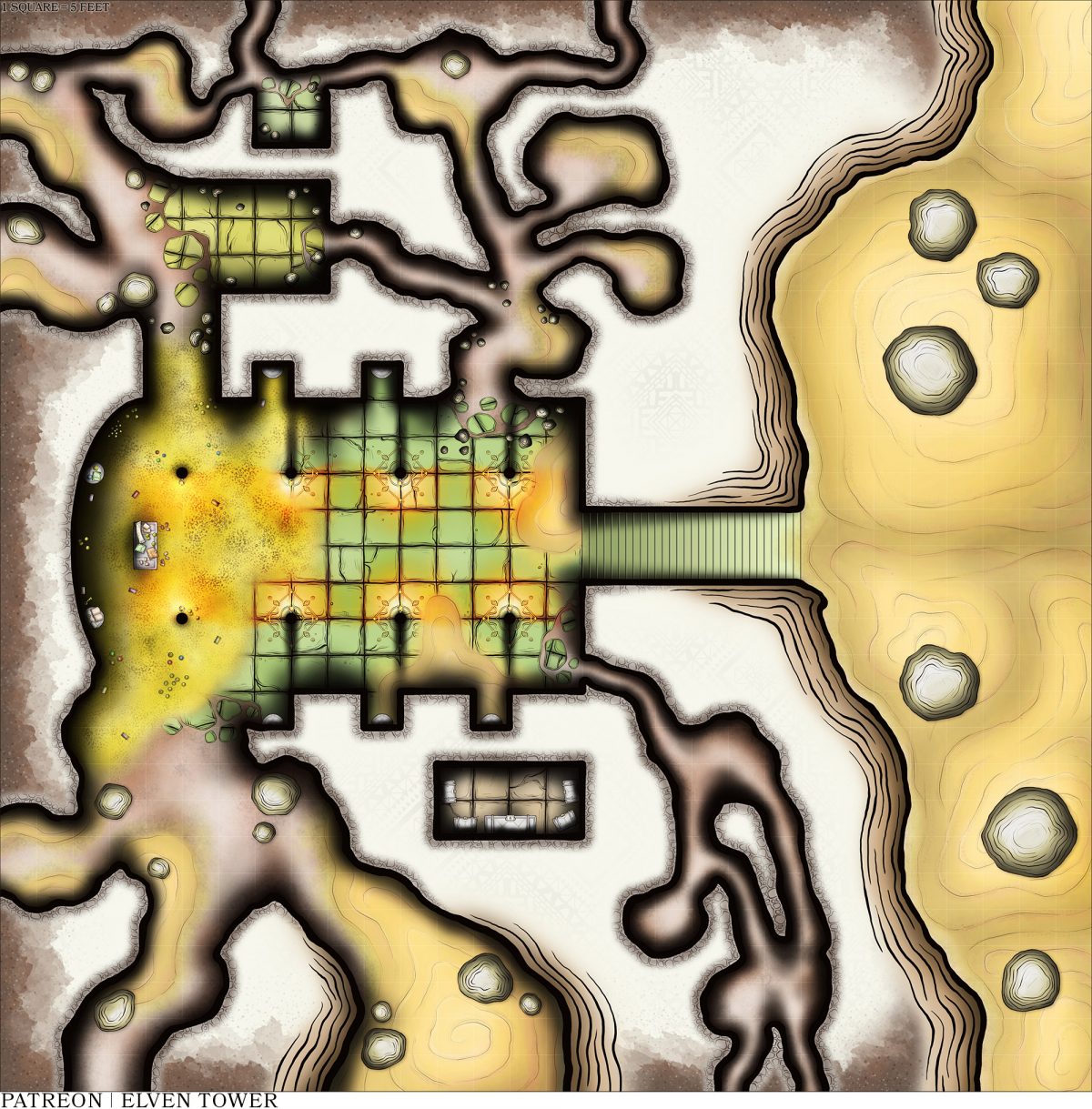 The dunes belong to me. All creatures in my territory shall pay tribute to me or else!

Those who live by the Northern Desert are rugged folk who are accustomed to harsh lives and even harsher rulers. In such regions, the peasantry knows that there is no alternative to a life of hard work and submissions to those above one’s station. Alas, the toughest of rulers has claimed the desert as its home: a blue dragon.

Two years ago, a juvenile blue dragon named Kieldrith left its infancy home in the Bloodstained Mountains and settled in the Northern Desert. Kieldrith found an old human temple in the depths of the desert. The half-submerged compound was connected to a network of slithering caverns where a tribe of kobolds lived. The kobolds pledged their loyalty to Kieldrith at once, fearing the dragon’s retaliation should they refuse to obey her.

Since then, Kieldrith has expanded her territory and influence in the desert and the human settlements that surround it. The blue dragon escorts a group of kobold envoys who deliver terms of surrender to a town or hamlet. Kieldrith has avoided all confrontations. She flies over the town or hamlet and breathes lightning over their heads to show off her power. The settlement leaders surrender at such display and agree to pay the kobolds a monthly tribute to ensure the safety of their townsfolk.

Four months ago, Kieldrith and her kobolds played the same game with the capital city of Goldenspear which is a few miles away from the Northern Desert. The city tried to resist by attacking Kieldrith with wall-mounted scorpions. It was an utter failure. The blue dragon destroyed the siege weapons and vaporized parts of the outer wall. As a punishment for their disrespect, Kieldrith imposed a steep tribute to the capital.

The unfair tribute that the city must pay to keep Kieldrith at bay is unsustainable. The city coffers and the grain silos empty at a rate that shall leave the city in ruins before long. The city officials sent a party of negotiators to Kieldrith’s lair to convince the dragon of easing their tribute or else the city would collapse into civil war. Half the negotiators survived. Their cracked voices explained that the dragon overlord ate the rest of them.

The capital city, Goldenspear, offers a sizable reward of 5,000 gold pieces to brave adventurers who manage to put a stop to Kieldrith’s reign of terror in the Northern Desert. The city stopped paying tribute to the dragon’s kobold lackeys two weeks ago. They are sure to retaliate soon. Other adventuring parties have failed to achieve this quest. The characters are the city’s only hope.

Features of the Lair

The following features correspond to Kieldrith’s lair in the desert; areas 1 through 8.

Temperature. The weather in the Northern Desert is dry and hot enough to require clothing appropriate to the region. Characters in plate armor or without the correct attire for hot weather acquire one level of exhaustion.

Smells and Sounds. The stench from the kobolds’ filth and detritus is evident in any part of the dungeon. A competent tracker identifies the droppings (DC 14 Survival).

Structure. The thousand-year-old temple maintains a stoic rebellion against the harsh wind of the Northern Desert. The underground temple complex is in a severe state of erosion and disrepair but it is stable.

After a one-day journey through the inclement desert, the dunes give way to a descending stone staircase. Large dragon footprints lead in and out of it.

The characters find Kieldrith’s lair in the desert and can approach the exploration as they see fit. If the characters take spend an hour to explore the area, they find an alternate entrance to the underground chamber between the rocky crags in area 3 (DC 14 Investigation).

The compound is buried under the dunes. The eroded stairs lead down into the dragon’s lair. Intricate runes and hieroglyphs decorate the walls. They are a testament that humans built this structure centuries ago. A scholar knows that the construction was made by humans at least 1,000 years ago (DC 16 History).

Loyal Guards. A band of ten kobolds guards the main entrance to Kieldrith’s lair at all times. If the characters ask politely to speak with the dragoness, the kobolds oblige and let them descend to area 2. The kobolds giggle mischievously while the characters descend.

Eight carved pillars lead the way to a grandiose chamber with a 40-foot-tall domed ceiling. An enormous pile of gold coins, gems, and treasure litters the far end of the large nave-like chamber.

The dragoness, Kieldrith awaits the characters lying on her treasure hoard. She is arrogant and self-confident enough to receive all visitors and have them here near her treasure trove. She intends to eat half the adventuring party and let the rest of them return to Goldenspear to send a message; just like she did with past envoys. If a character proves to be a fun person in conversation, Kieldrith might choose to keep them alive as a buffoon.

Draconic Rage. In combat, Kieldrith (young blue dragon) fights alongside her loyal kobolds. There are four kobolds with the dragon, including Farken (see area 7); more come from area 6 in waves of 2 every other round. The dragon flees if reduced to a quarter of its hit points. If Kieldrith is defeated, all kobolds flee.

Treasure. The hoard contains 7,000 gp, 21,000 sp, eight platinum ingots (200 gp each), a collection of antique books (30 gp total), a deed to a tower in Goldenspear, a bone chalice (40 gp), a mithral chainmail, and an assortment of seven random level 4 arcane spell scrolls.

Two tunnels lead down into uncharted depths. The third one leads to an entrance in between the rocky crags in the desert. The sands burn in the sunlight.

If the characters reach area 2 from here and attempt to make a silent approach, they may find Kieldrith sleeping on her gold coin hoard (DC 16 Stealth). A geologist determines that these tunnels are a recent addition. They were most likely dug by the blue dragon herself as a means to enter and exit her lair. (DC 15 Arcana).

Four stone chests and a large stone coffer stand in the dark room in stoic patience; oblivious to the dragon and the kobolds’ presence for centuries.

Despite Kieldrith’s two-year-long presence in the dilapidated temple, neither she nor the kobolds found this vault. Its contents reveal that the place was devoted to the worship of the Lord of Suns, a human deity.

Slithering tunnels meander through the hard rocky ground. A multitude of 6-inch-wide tunnels pierces the walls and floor; evidence of burrowing critters.

A large community of rodent-like critters lives in these caverns. They hunt in the area and steal food from the kobolds and the dragon. The kobolds avoid the area because the rats are ferocious enough to pose a threat to them. The rats fear Kieldrith but the dragon cannot access these tunnels due to her large size.

Territorial Vermin. Four swarms of rats attack any trespassers and steal food from their bags, if any.

The pungent stench of reptilian filth permeates these caves. The sickening smell is strong enough to make the strongest stomachs hesitate.

The kobolds sleep on the sand and have little to no possessions; they have surrendered all they had to Kieldrith. More than half the tribe consists of non-combatants and young offspring. In case of attack, these kobolds flee with as many eggs and younglings as they can carry.

Kobolds Galore. Sixteen kobolds defend their caves ferociously. They flee if the Kieldrith is defeated, though.

The chamber contains a single straw bed and piles of scrolls and pieces of scribed parchment.

Kieldrith’s taught some magic tricks to her favorite kobold, Farken. Farken is a level 3 wizard who carries his thick spellbook wherever he goes. The other kobolds consider him their leader. After Kieldrith, of course. Farken aids the blue dragon defend the lair in area 2 or helps the rest of the kobolds fight in area 6.

The broken remains of stone coffers litter the room. The kobolds emptied this vault from its valuable contents and left several of their red-hued eggs incubating on a stray bed. Some eggs have hatched.

This was once a secret chamber similar to the one in area 4. The walls caved in ages ago and all the treasure from this room fell into the kobolds’ possession. They surrendered it to Kieldrith two years ago. The room is now a hatchery with a permanent burning fire and at least ten or twelve eggs. Broken eggshells litter the floor.

The characters are defeated in combat. Kieldrith chooses the quirkiest one to keep as a buffoon. Half the party is devoured and the rest are sent back to Goldenspear to tell the authorities the following: “Try me once more and I shall lay waste to your beloved city”.

The characters achieve victory. Kieldrith is either dead or she has been driven off the Northern Desert. The authorities are true to their word and pay the characters the 5,000 gp reward. They agree to let the characters keep half the treasure hoard retrieved from Kieldrith’s lair. The remaining half shall serve the city refill its coffers and make sure that the peasants are taken care of in the following times of need. Should Kieldrith survive, she flies away and holds a deep grudge. She shall return one day to take revenge against the city of Goldenspear and the characters. That is an adventure for another day. 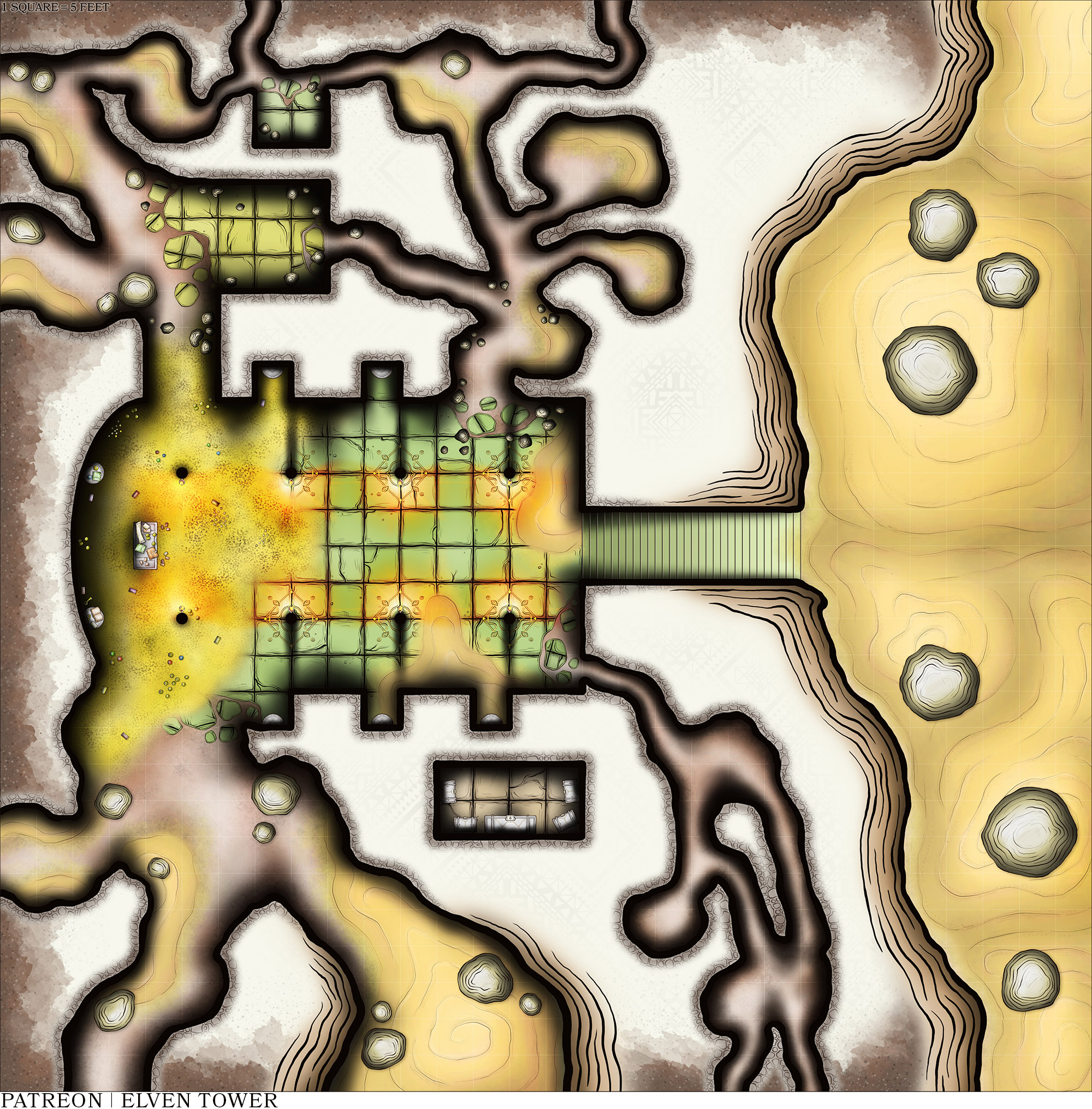