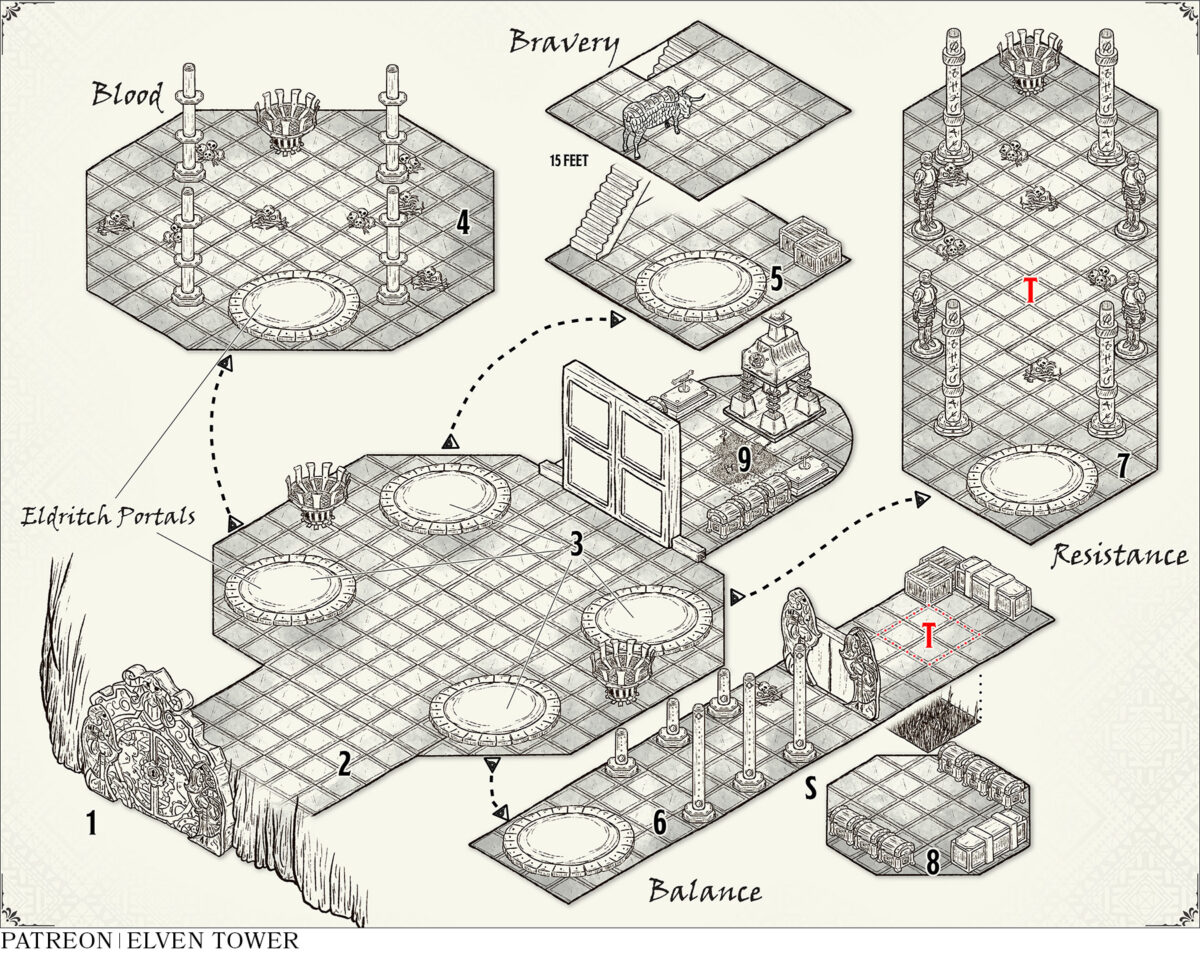 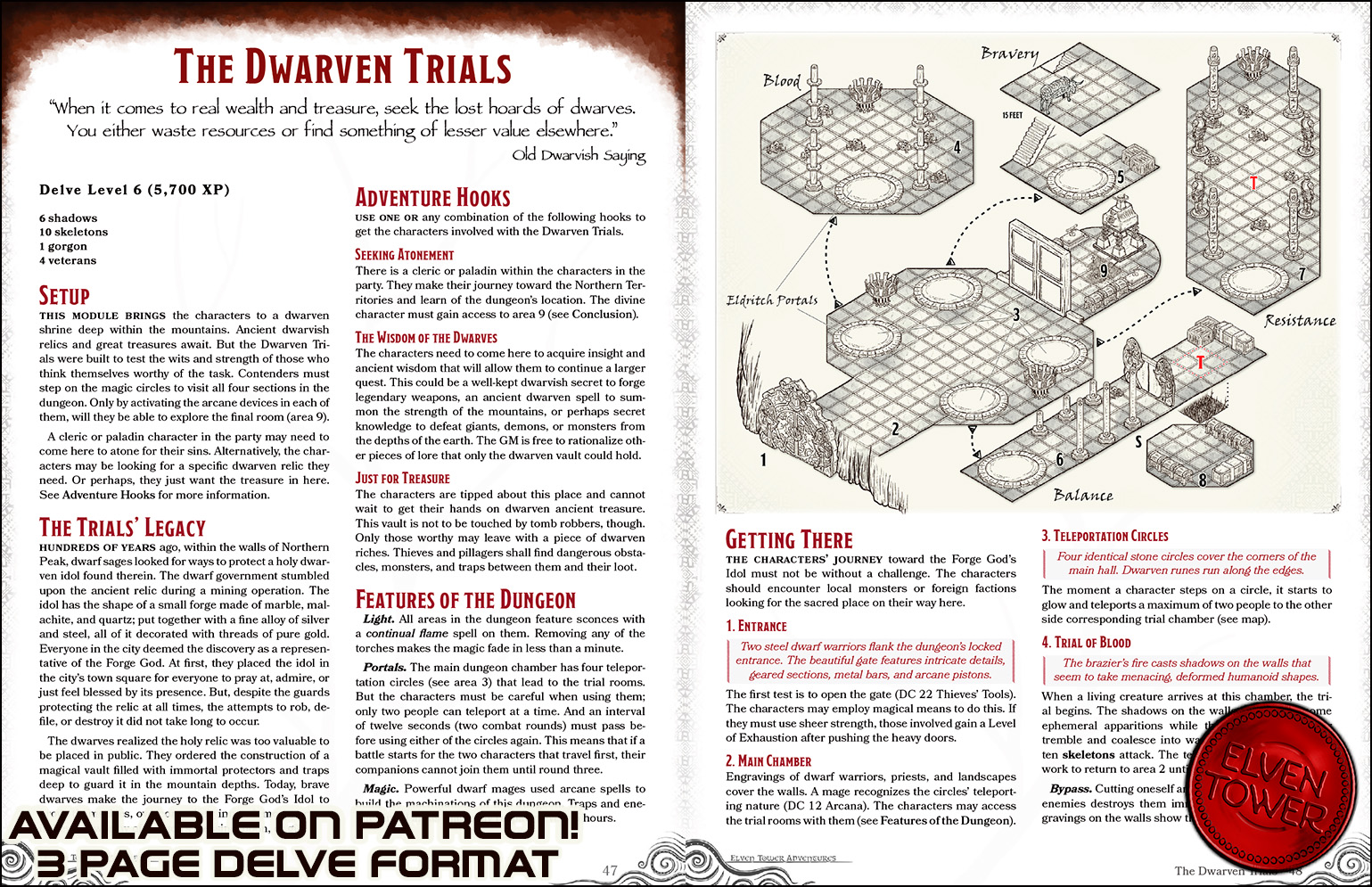 “When it comes to real wealth and treasure, seek the lost hoards of dwarves. You either waste resources or find something of lesser value elsewhere.”

This module brings the characters to a dwarven shrine deep within the mountains. Ancient dwarvish relics and great treasures await. But the Dwarven Tri­als were built to test the wits and strength of those who think themselves worthy of the task. Contenders must step on the magic circles to visit all four sections in the dungeon. Only by activating the arcane devices in each of them, will they be able to explore the final room (area 9).

A cleric or paladin character in the party may need to come here to atone for their sins. Alternatively, the char­acters may be looking for a specific dwarven relic they need. Or perhaps, they just want the treasure in here. See Adventure Hooks for more information.

Hundreds of years ago, within the walls of Northern Peak, dwarf sages looked for ways to protect a holy dwar­ven idol found therein. The dwarf government stumbled upon the ancient relic during a mining operation. The idol has the shape of a small forge made of marble, mal­achite, and quartz; put together with a fine alloy of silver and steel, all of it decorated with threads of pure gold. Everyone in the city deemed the discovery as a represen­tative of the Forge God. At first, they placed the idol in the city’s town square for everyone to pray at, admire, or just feel blessed by its presence. But, despite the guards protecting the relic at all times, the attempts to rob, de­file, or destroy it did not take long to occur.

The dwarves realized the holy relic was too valuable to be placed in public. They ordered the construction of a magical vault filled with immortal protectors and traps deep to guard it in the mountain depths. Today, brave dwarves make the journey to the Forge God’s Idol to prove themselves, overcome their inner demons, or see if they are worthy of the god’s blessing, boon, or gift.

Use one or any combination of the following hooks to get the characters involved with the Dwarven Trials.

There is a cleric or paladin within the characters in the party. They make their journey toward the Northern Ter­ritories and learn of the dungeon’s location. The divine character must gain access to area 9 (see Conclusion).

The Wisdom of the Dwarves

The characters need to come here to acquire insight and ancient wisdom that will allow them to continue a larger quest. This could be a well-kept dwarvish secret to forge legendary weapons, an ancient dwarven spell to sum­mon the strength of the mountains, or perhaps secret knowledge to defeat giants, demons, or monsters from the depths of the earth. The GM is free to rationalize oth­er pieces of lore that only the dwarven vault could hold.

The characters are tipped about this place and cannot wait to get their hands on dwarven ancient treasure. This vault is not to be touched by tomb robbers, though. Only those worthy may leave with a piece of dwarven riches. Thieves and pillagers shall find dangerous obsta­cles, monsters, and traps between them and their loot.

Light. All areas in the dungeon feature sconces with a continual flame spell on them. Removing any of the torches makes the magic fade in less than a minute.

Portals. The main dungeon chamber has four telepor­tation circles (see area 3) that lead to the trial rooms. But the characters must be careful when using them; only two people can teleport at a time. And an interval of twelve seconds (two combat rounds) must pass be­fore using either of the circles again. This means that if a battle starts for the two characters that travel first, their companions cannot join them until round three.

Magic. Powerful dwarf mages used arcane spells to build the machinations of this dungeon. Traps and ene­mies in all areas magically respawn every 6 hours.

The characters’ journey toward the Forge God’s Idol must not be without a challenge. The characters should encounter local monsters or foreign factions looking for the sacred place on their way here.

The first test is to open the gate (DC 22 Thieves’ Tools). The characters may employ magical means to do this. If they must use sheer strength, those involved gain a Level of Exhaustion after pushing the heavy doors.

Engravings of dwarf warriors, priests, and landscapes cover the walls. A mage recognizes the circles’ teleport­ing nature (DC 12 Arcana). The characters may access the trial rooms with them (see Features of the Dungeon).

The moment a character steps on a circle, it starts to glow and teleports a maximum of two people to the other side corresponding trial chamber (see map).

The brazier’s fire casts shadows on the walls that seem to take menacing, deformed humanoid shapes.

When a living creature arrives at this chamber, the tri­al begins. The shadows on the walls shift and become ephemeral apparitions while the bones on the floor tremble and coalesce into warriors. Six shadows and ten skeletons attack. The teleportation circle does not work to return to area 2 until all undead are defeated.

Bypass. Cutting oneself and spilling one’s blood on the enemies destroys them immediately, no save. The en­gravings on the walls show this (DC 18 Perception).

This section is divided into two levels. A beast’s heavy breathing can be heard from above the long stairway.

The characters must confront a gorgon here. Some of the monster’s victims lie petrified in the second story. The gorgon charges the characters the moment it sees them approach. Its gas spreads on both levels.

Bypass. The characters may prove they have the cold­est blood and a dragon’s wit. If they breathe the gorgon’s foul gas willingly, they become immune to it.

Six columns flank this corridor-shaped chamber. A gate blocks the way by its midpoint. A strong wind current pushes newcomers toward the magic circle.

The characters must use the columns to resist the wind and advance 5 feet per round (DC 18 Athletics).

Bypass. If a dwarf is part of the group, they may re­member their nature and stand straight against the wind and not use the columns as protection, knowing well it won’t knock them down. Others may do the same and ad­vance at normal speed. The key is not to resist the wind.

Spiked Pit. Characters that fail to notice the pres­sure-sensitive plate (DC 18 Perception) before the trea­sure fall 15 feet and get impaled by rusty metal spikes. They take 6d6 piercing damage (DC 16 Dexterity / half). The containers at the end do not exist, they are illusions.

The bones in this large chamber belong to the many peo­ple that failed these trials before… Their souls are trapped by the dungeon’s wards and enchantments. Their energy gives life to four sets of armor. They fight like brave dwarf warriors (use the veteran stats but grant them the prop­erties of a construct). They respawn in 6 hours.

Trap. Standing in the very center of this area activates a trap. Poison darts shoot from a thousand tiny holes in the walls and fly in every direction. They target all crea­tures in the chamber. Victims take 6d6 poison damage and become poisoned for 1 hour (DC 15 Constitution).

Bypass. There is no way to bypass this trial. Only those with strength and resolve can best the immortal dwarf warriors and gain access to the Forge God’s Idol.

Only the most curious of characters find this hidden area behind a pushable brick (DC 17 Perception). There are 3,486 gp, three potions of greater healing, a +1 dagger, and two magic items of the GM’s choice.

Each of the gate divisions glows with each traversed tri­al. It opens when the last trial is completed. The charac­ters succeeded. They stand before the Forge God’s Idol. Besides the treasure, they may learn ancient dwarvish lore, or find divine atonement (see Conclusion).

The Path of the Divine

The character seeking divine guidance and forgiveness may do so by praying to the Forge God’s Idol. They must concentrate on prayer during an entire day (or the time that the GM considers best) to remove whichever afflic­tion prevents them from communicating with their god, cast spells, etc. The GM is free to come up with a mag­ical boon if the character in question is of dwarf origin.

A Treasure for the Worthy

Chests full to the brim. Piles of gold with silver weapons interred in them. Pedestals holding magical scrolls. The characters are free to take something or grab it all. No one shall judge what they do with well-earned treasure. The GM determines how large this hoard is. 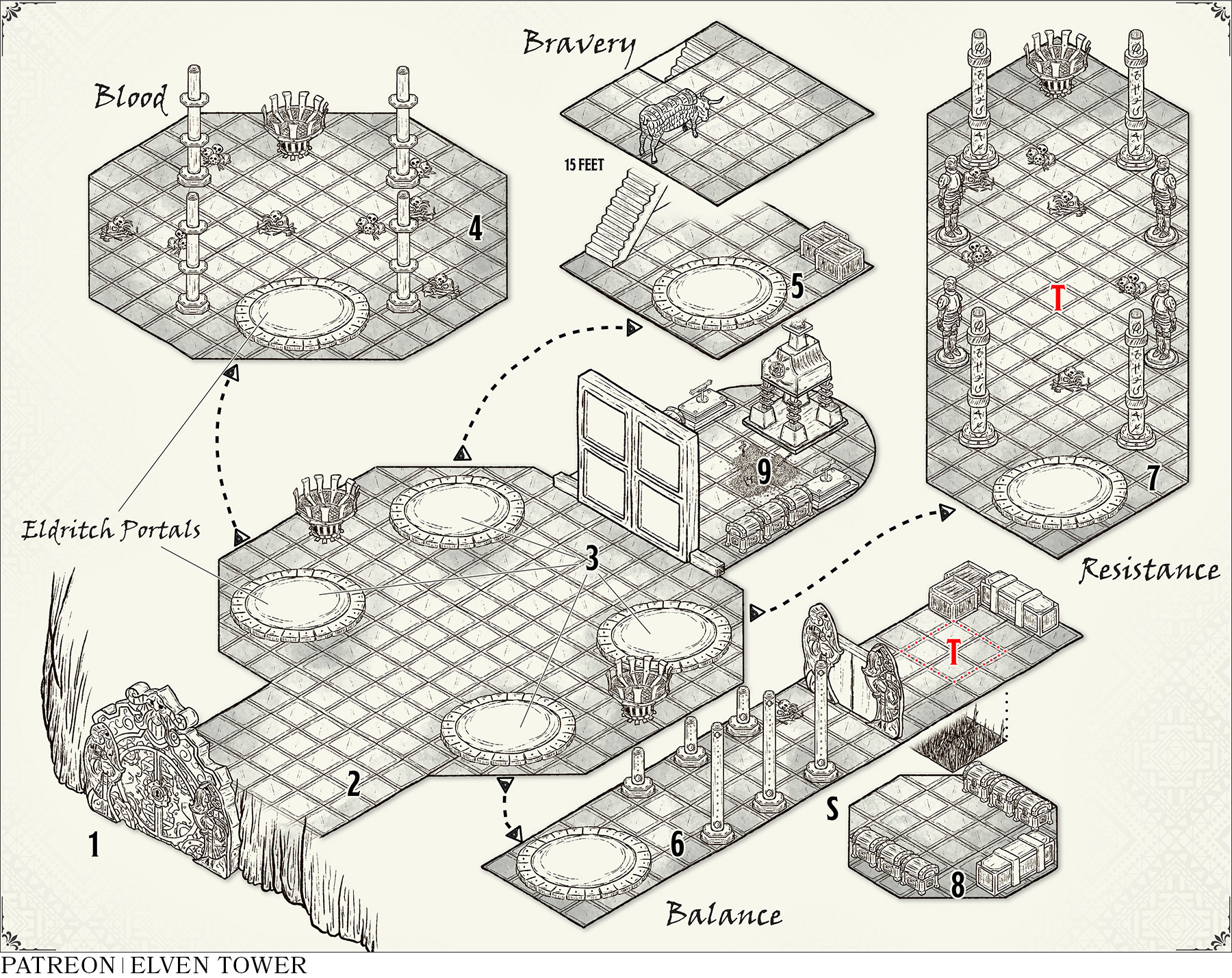