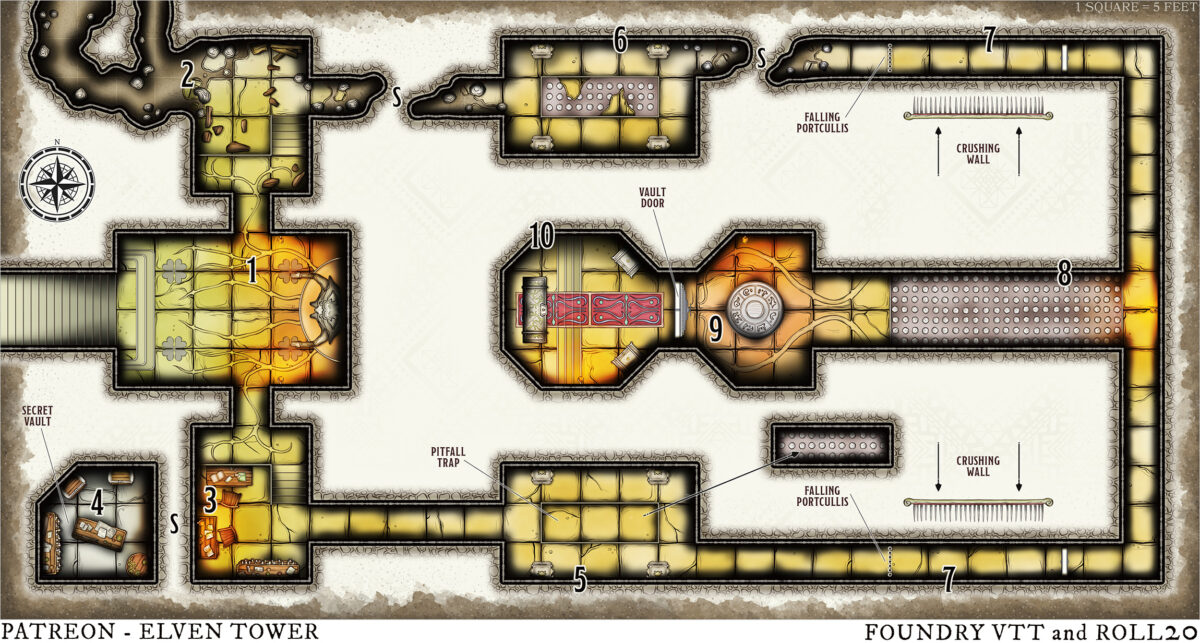 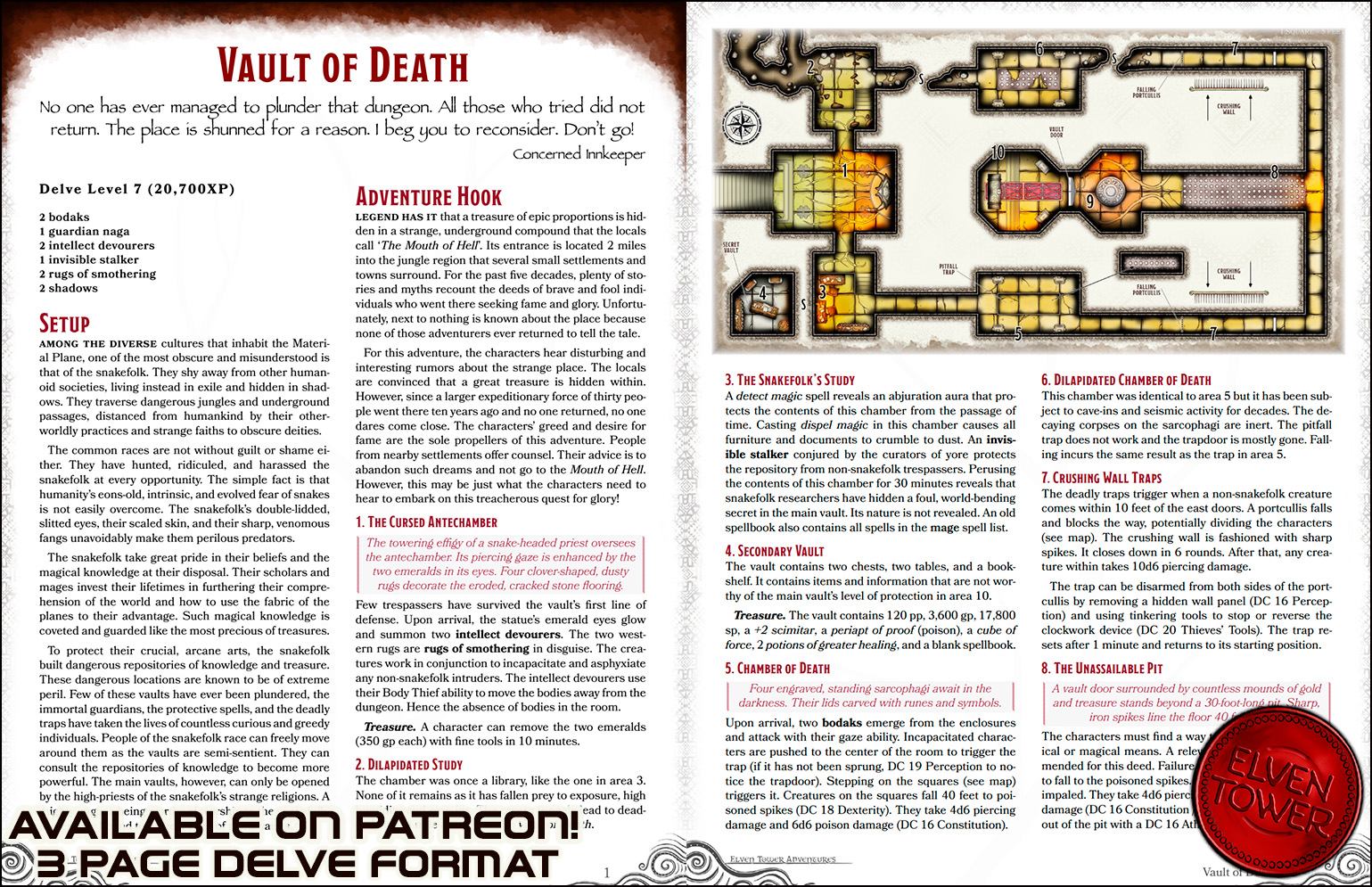 No one has ever managed to plunder that dungeon. All those who tried did not return. The place is shunned for a reason. I beg you to reconsider. Don’t go!

Among the diverse cultures that inhabit the Materi­al Plane, one of the most obscure and misunderstood is that of the snakefolk. They shy away from other human­oid societies, living instead in exile and hidden in shad­ows. They traverse dangerous jungles and underground passages, distanced from humankind by their other­worldly practices and strange faiths to obscure deities.

The common races are not without guilt or shame ei­ther. They have hunted, ridiculed, and harassed the snakefolk at every opportunity. The simple fact is that humanity’s eons-old, intrinsic, and evolved fear of snakes is not easily overcome. The snakefolk’s double-lidded, slitted eyes, their scaled skin, and their sharp, venomous fangs unavoidably make them perilous predators.

The snakefolk take great pride in their beliefs and the magical knowledge at their disposal. Their scholars and mages invest their lifetimes in furthering their compre­hension of the world and how to use the fabric of the planes to their advantage. Such magical knowledge is coveted and guarded like the most precious of treasures.

To protect their crucial, arcane arts, the snakefolk built dangerous repositories of knowledge and treasure. These dangerous locations are known to be of extreme peril. Few of these vaults have ever been plundered, the immortal guardians, the protective spells, and the deadly traps have taken the lives of countless curious and greedy individuals. People of the snakefolk race can freely move around them as the vaults are semi-sentient. They can consult the repositories of knowledge to become more powerful. The main vaults, however, can only be opened by the high-priests of the snakefolk’s strange religions. A mighty naga, a being worthy of worship to the snakefolk, is eternally bound to protect each of these vaults.

Legend has it that a treasure of epic proportions is hid­den in a strange, underground compound that the locals call ‘The Mouth of Hell’. Its entrance is located 2 miles into the jungle region that several small settlements and towns surround. For the past five decades, plenty of sto­ries and myths recount the deeds of brave and fool indi­viduals who went there seeking fame and glory. Unfortu­nately, next to nothing is known about the place because none of those adventurers ever returned to tell the tale.

For this adventure, the characters hear disturbing and interesting rumors about the strange place. The locals are convinced that a great treasure is hidden within. However, since a larger expeditionary force of thirty peo­ple went there ten years ago and no one returned, no one dares come close. The characters’ greed and desire for fame are the sole propellers of this adventure. People from nearby settlements offer counsel. Their advice is to abandon such dreams and not go to the Mouth of Hell. However, this may be just what the characters need to hear to embark on this treacherous quest for glory!

The towering effigy of a snake-headed priest oversees the antechamber. Its piercing gaze is enhanced by the two emeralds in its eyes. Four clover-shaped, dusty rugs decorate the eroded, cracked stone flooring.

Few trespassers have survived the vault’s first line of defense. Upon arrival, the statue’s emerald eyes glow and summon two intellect devourers. The two west­ern rugs are rugs of smothering in disguise. The crea­tures work in conjunction to incapacitate and asphyxiate any non-snakefolk intruders. The intellect devourers use their Body Thief ability to move the bodies away from the dungeon. Hence the absence of bodies in the room.

Treasure. A character can remove the two emeralds (350 gp each) with fine tools in 10 minutes.

The chamber was once a library, like the one in area 3. None of it remains as it has fallen prey to exposure, high humidity, and cave-ins. The cavern tunnels lead to dead-ends half a mile away from the Vault of Death.

A detect magic spell reveals an abjuration aura that pro­tects the contents of this chamber from the passage of time. Casting dispel magic in this chamber causes all furniture and documents to crumble to dust. An invis­ible stalker conjured by the curators of yore protects the repository from non-snakefolk trespassers. Perusing the contents of this chamber for 30 minutes reveals that snakefolk researchers have hidden a foul, world-bending secret in the main vault. Its nature is not revealed. An old spellbook also contains all spells in the mage spell list.

The vault contains two chests, two tables, and a book­shelf. It contains items and information that are not wor­thy of the main vault’s level of protection in area 10.

Four engraved, standing sarcophagi await in the darkness. Their lids carved with runes and symbols.

Upon arrival, two bodaks emerge from the enclosures and attack with their gaze ability. Incapacitated charac­ters are pushed to the center of the room to trigger the trap (if it has not been sprung, DC 19 Perception to no­tice the trapdoor). Stepping on the squares (see map) triggers it. Creatures on the squares fall 40 feet to poi­soned spikes (DC 18 Dexterity). They take 4d6 piercing damage and 6d6 poison damage (DC 16 Constitution).

This chamber was identical to area 5 but it has been sub­ject to cave-ins and seismic activity for decades. The de­caying corpses on the sarcophagi are inert. The pitfall trap does not work and the trapdoor is mostly gone. Fall­ing incurs the same result as the trap in area 5.

The deadly traps trigger when a non-snakefolk creature comes within 10 feet of the east doors. A portcullis falls and blocks the way, potentially dividing the characters (see map). The crushing wall is fashioned with sharp spikes. It closes down in 6 rounds. After that, any crea­ture within takes 10d6 piercing damage.

The trap can be disarmed from both sides of the port­cullis by removing a hidden wall panel (DC 16 Percep­tion) and using tinkering tools to stop or reverse the clockwork device (DC 20 Thieves’ Tools). The trap re­sets after 1 minute and returns to its starting position.

A vault door surrounded by countless mounds of gold and treasure stands beyond a 30-foot-long pit. Sharp, iron spikes line the floor 40 feet below.

The characters must find a way to cross the pit by phys­ical or magical means. A relevant skill check is recom­mended for this deed. Failure by 5 or more causes them to fall to the poisoned spikes. Creatures that fall become impaled. They take 4d6 piercing damage and 6d6 poison damage (DC 16 Constitution / half). Creatures can climb out of the pit with a DC 16 Athletics check.

9. Door of the Guardian Naga

A major illusion spell makes it appear as if the room contained the grandest of treasure hoards. A guardian naga and two shadows hide behind the arcane projec­tion while the characters cross the gaping pit in area 8.

When half the characters manage to cross the pit, the naga and the undead emerge from the illusion and at­tack. The naga targets characters in the midst of cross­ing the pit with its Spit Poison ability or incapacitating spells like hold person or command, to make them fall into the poisoned spikes below. The naga is bound to fight until it is destroyed. However, it returns to guard the vault with its Rejuvenation ability after 1d6 days pass.

The Vault Door. A fine locksmith can bypass the com­plex clockwork device after a day of hard work (DC 22 Thieves’ Tools). On a failure, the complex device proves to be beyond the character’s ability to solve. Whatever tools were used are broken. The characters must return later with better tools and traverse the whole vault again.

The great vault contains three stone coffers. The two smaller ones contain 10,000 gp and a set of seven +1 daggers with bone hilts and obsidian blades.

The larger coffer contains a crystal ball, three arrows of slaying, and a variant of a sphere of annihilation. The black sphere is the culmination of centuries of snakefolk experiments. It is extremely valuable to the high-priests.

Interacting with the crystal ball in any way opens a one-way connection with a faraway scrying device. A cabal of snakefolk high-priests become aware of the characters and soon seek them out to retrieve their vault’s treasure. Perceptive characters might notice this (DC 20 Insight).

Light. Some areas feature sconces with continual flame spells. If removed, the magic fades in 1 minute.

Secret Doors. An observant character finds hidden buttons on fake bricks or loose sections of fallen debris that can be removed. Upon inspection, narrow passages to hidden areas are revealed (DC 17 Investigation).

Smells and Sounds. The sound of slithering snake tongues and rattlesnake tails in the distance can be heard in any chamber. This is an illusory effect meant to dishearten trespassers that can be dispelled.

Magical Aura. A detect magic spell reveals a strong aura of conjuration in area 9. The aura can be perceived from any chamber within the Vault of Death.

Poison Vulnerability. Creatures have disadvantage against all saving throws against poison in the dungeon. Spells that nullify poison or cure diseases prevent this. 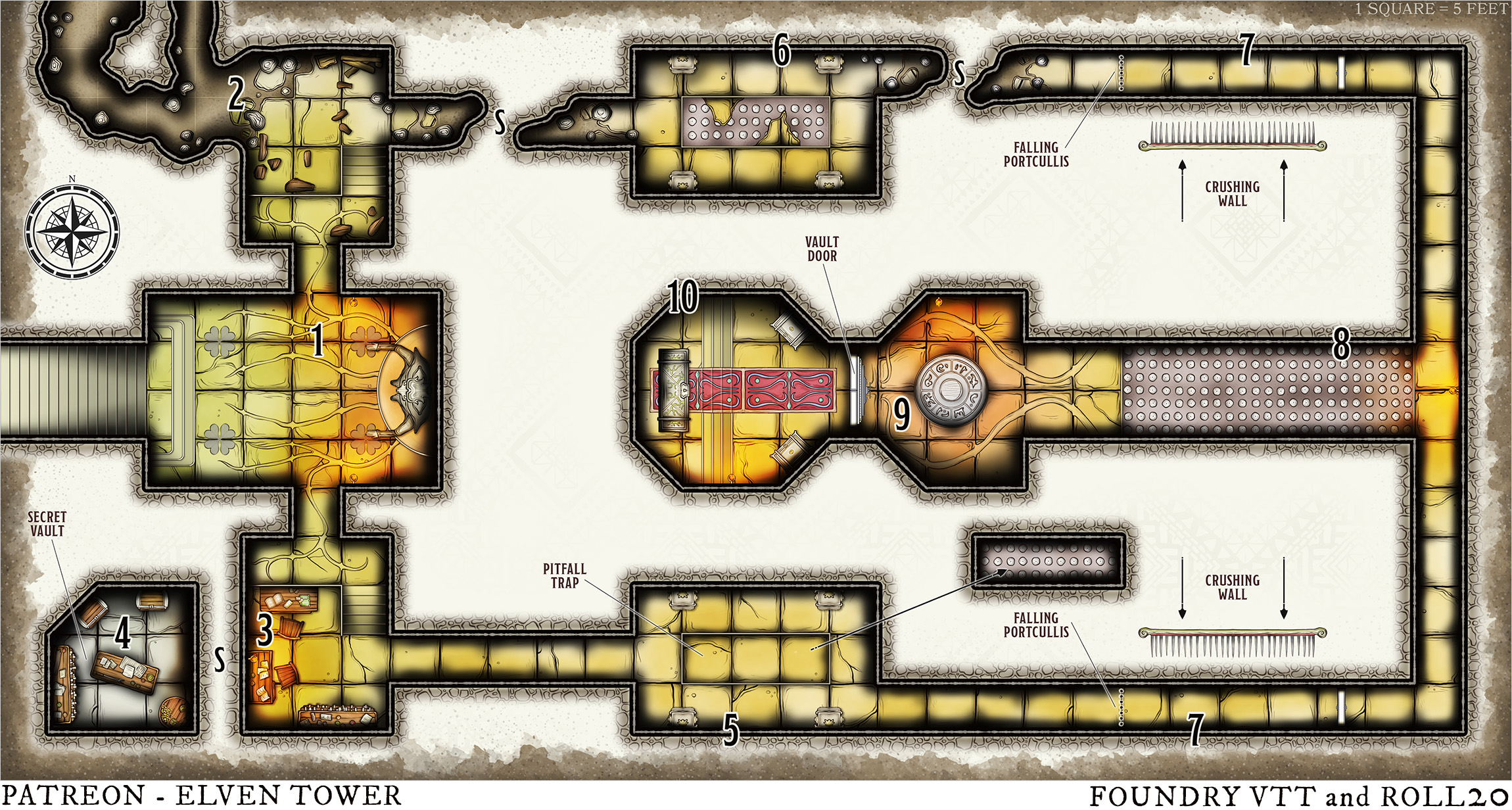